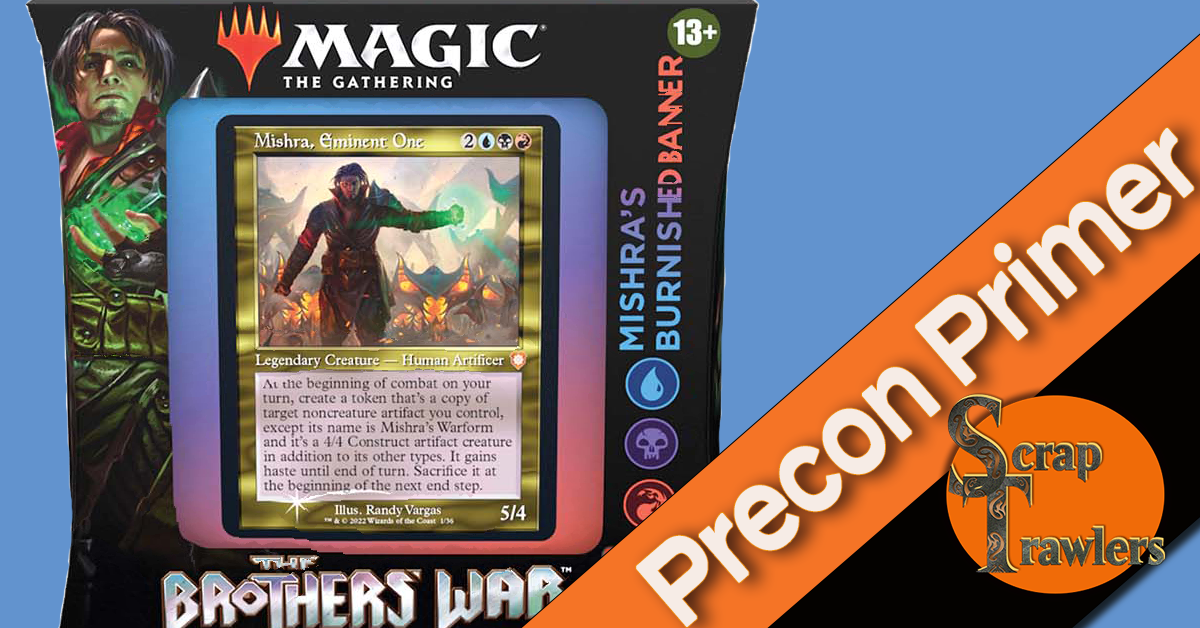 Welcome back everyone, to another EDHREC precon primer. Today we're reviewing the Mishra's Burnished Banner deck released with Brother's War Commander. Naturally, Mishra, Eminent One is leading the charge.

Mishra is a 5/4 human artificer for five mana that makes a token copy of a noncreature artifact you control every turn, except it's a 4/4 creature with haste named Mishra's Warform you have to sacrifice at end of turn. This is useful to get more mileage out of value artifacts and it doesn't hurt to run a decent sized creature you were going to lose anyway into your opponent's board. The ability had some interesting applications and makes some previously underwhelming cards worth playing, but at five mana I find myself wanting just a little more from this commander.

If Mishra isn't appealing, you can always swap him out for Ashnod the Uncaring who has a powerful ability in her own right and strictly more fabulous hair. Ashnod copies the ability of an artifact or creature if a permanent was sacrificed to activate it. Doubling up on effects from things like Mind Stone is powerful, but there are only 16 such cards in the deck so I recommend playing Mishra out of the box. Speaking of which, let's take a look at the contents of the deck.

The main strategy of this deck is tough to pin down. I'd say it's mostly a value engine deck based around non creature artifacts. It's looking to build cards in hand and on the battlefield through Mishra's copying effect along with the numerous sacrifice effects in the deck. We already have plenty of options if we're looking to junk our artifacts, but this deck comes with a few new toys I want to talk about. Farid, Enterprising Salvager makes artifact tokens whenever you lose a non token artifact. While the scraps do nothing on their own, Farid can sacrifice them to dig for cards, goad a creature, or get bigger and there are numerous other cards we can use those scraps for. Smelting Vat is a great way to get more stuff on board by letting you sacrifice an artifact to look through the next eight cards and find up to two artifacts with the same total cost. Keep in mind the token copy Mishra makes will keep the mana value of the original, so you want to copy your high cost stuff for this. Aside from sacrificing for value, Wondrous Crucible provides some protection for all your permanents and potentially gives you free spells at your end step, which means if Mishra makes a copy it will stick around long enough to give you that benefit.

Despite all the value engines in the deck, it's still looking to close out the game with combat. There are a few token producers in the deck, so having Brudiclad, Telchor Engineer shift them into whatever Mishra copied is a great way to get an army of 4/4's out of nowhere. Workshop Elders gives artifact creatures flying and can animate something every turn. Scavenged Brawler is a new card that can be exiled from the graveyard to put four counters along with flying, vigilance, trample, and lifelink. This is great for turning the commander into a legitimate threat or powering up Traxos, Scourge of Kroog or Hellkite Igniter. Finally Blast-Furnace Hellkite can be cast at instant speed thanks to the artifact offering ability, surprising an opponent with suddenly double striking attackers.

Like many engine based decks, this one takes a while to get going. A lot of the early cards are either ramp, or something for Mishra to copy later on like Ichor Wellspring, and most of the creatures being either high cost or in for utility, so don't expect to participate in combat early on. Things really start to get going once you land the commander. Making copies of Mnemonic Sphere to draw cards or Wayfarer's Bauble to ramp is all well and good, but you really start to be a problem when you're destroying things every turn by copying Spine of Ish Sah then sacrificing the token to Audacious Reshapers or Smelting Vat to get more artifacts. Don't be afraid to sacrifice your non token stuff since there are ways to get your artifacts back like Emry, Lurker of the Loch and Silas Renn, Seeker Adept. In the mid to late game it's easy to build a frightening board, so you want to get there quickly. In starting hands I'd advise trying to get four mana producers, ideally three lands and a mana rock you can cast. I also think it's a good idea to be looking out for cards like Mycosynth Wellspring or Servo Schematic that come down early and make decent targets for the commander later.

The deck is capable of generating a lot of value and can fill the board with artifacts, but that doesn't necessarily translate into a win. It's quite possible to spend a lot of time taking game actions, and drawing cards without actually moving toward a way to close out the game. The focus on non creature artifacts can also be a problem because the deck ends up being light on defense. The creatures tend to be top end finishers or utility pieces that feel bad to block with so you're likely to end up taking a few hits throughout the game. More aggressive decks can put you in the danger zone before you're ready to develop your plan and because this deck can take so many game actions, there's a good chance those aggressive decks will be nervous about what you're doing. I found this to be the case playing against the Urza's Iron Alliance deck. My deck did a lot, but ultimately struggled to defend against Urza's construct army.

Mishra comes with some awesome new toys, aespecially for artifact decks. Terisiare's Devastation is a fantastic new board wipe for artifact decks. It gives creatures -1/-1 for each artifact you control so it gets around indestructible, and if you need to increase that number, you can pay into the X cost to get some powerstones. Machine God's Effigy is an interesting new mana rock. It copies a creature like Cursed Mirror only the effigy doesn't become a creature. Notably this is an infinite mana combo with Devoted Druid, but this card is also very useful if you want to have a copy of a creature that is spared the myriad ways creatures get killed in a game of Commander. It's going to be great for artifact decks and clone decks alike. Wondrous Crucibleis a lot at seven mana, but there are plenty of decks out there that would be interested in the self mill, and the extra protection from Ward 2 is more impactful than it seems and many opponents will be caught off guard by it. Blast-Furnace Hellkite is far and away the my favorite new card in this deck. I'm already sold at giving double strike to creatures attacking your opponents, but this card has icing on the cake with artifact offering. Not can you reduce the cards hefty cost, but you can cast it at instant speed turning yours or an opponents attack suddenly lethal. This is a great fit for all those goad commanders we've seen lately and I expect to see it pop up in dragon decks, but it's a great fit for any combat focused deck.

At first glance, I was unsure about the reprint value in this set. Lithoform Engine commands the most value among reprints and is useful in many decks, but even then it's only going for about $7. On a closer look, though the deck has many staple cards that always seem to end up being a few dollars like Blasphemous Act, Chaos Warp, and Bedevil. Expressive Iteration is powerful enough to be banned in Pioneer, and Cursed Mirror is a fun mana rock with a ton of applications.

In addition to general use cards, there are a lot of excellent reprints geared toward artifact decks like Silas Renn, Seeker Adept, Emry, Lurker of the Loch (Eldraine was three years ago), and Padeem, Consul of Innovation.

Since the Brother's War preconstructed decks are printed entirely with the old frame, many of the reprints are going to be unique versions of the cards which might be of interest to collectors or to people with Commander decks that only use the old frame cards.

Overall, Mishra's Burnished Banner is a great deck, if a little bit of a grind. I think it could be made much better with a some tricks to keep your opponents at bay along with a few more ways to get in for damage. It's a great place to start on building an artifact deck as it has a lot of great cards for the strategy and potential commanders for a deck if you decide not to use Mishra or Ashnod. It's a good value as it gives you unique printings of classic Commander cards. Those are my thoughts on Mishra's Burnished Banner, feel free to drop yours in the comments. Stay tuned for my upgrade guide coming soon and remember to budget before you buy it.