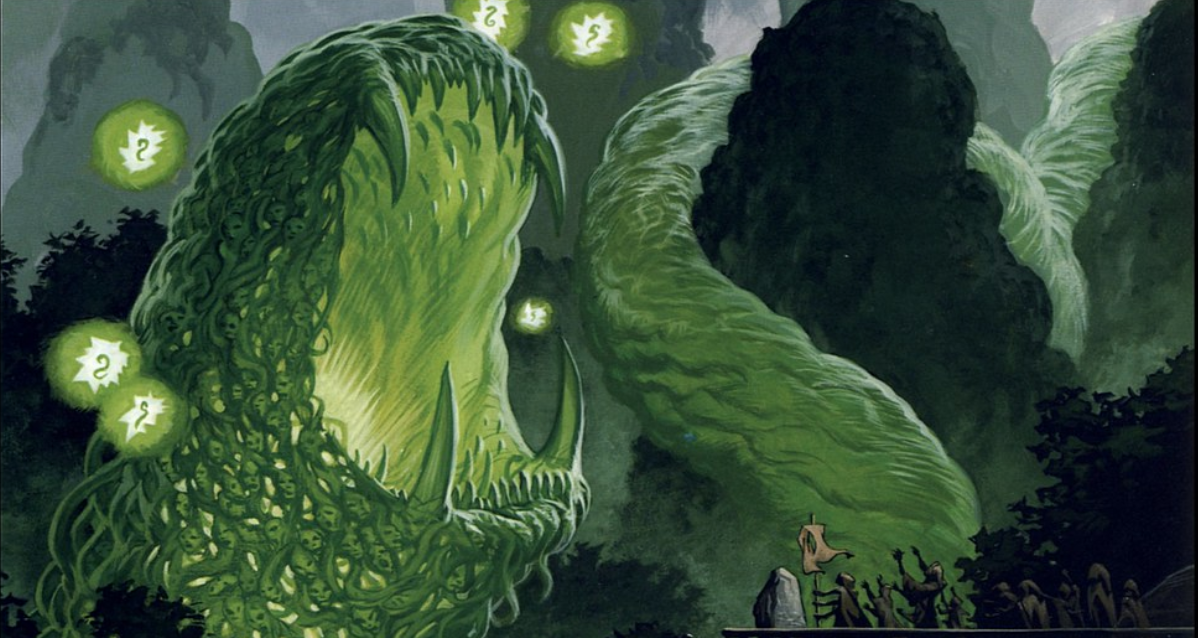 (Patron of the Orochi | Art by Christopher Moeller)

Greetings everyone, I’m Steven Vincent and welcome to Monomania. In this article series we will build mono-colored Commander decks as a means to discuss two of the most important things in the format: ramp and draw.

For a long time, I prescribed to a set of beliefs that many EDH players share—white and red don’t do card advantage, Blue Sun’s Zenith deserves a spot in most blue decks, and any deck that has access to green should always defer to Cultivate and Kodama’s Reach. Eventually, I realized that these generalities aren’t always true. I started building my decks differently, employing ramp and draw strategies that forego some of the format staples in favor of cards that support the main strategies of my commander. In the process, I realized that by interrogating these ideas and staple cards, my decks became more fun, compelling, and powerful. My goal with this series is to inspire creative deckbuilding and help other players overcome some of these misconceptions about Commander. Ramp and draw cards can be just as thematically consistent as any other in the 99.

At six mana, Staff of Nin draws you one extra card every turn and it sees play in 13,538 decks on EDHREC. There are plenty of better draw options in every color, many of them with favorable interactions with certain commanders. Sometimes, you just have to dig a little further to find them. I hope to motivate people to unsleeve some copies of the aforementioned Staff and suit up a Pursuit of Knowledge or two.

So without further ado, let’s get into it. This is Monomania.

Our first commander is Patron of the Orochi, with only 77 decks listed on EDHREC. Don’t be fooled by the low popularity—this is a very powerful general with the right support. But it also inherently resists some of the most highly-played green ramp and draw staples.

At first glance, Patron may seem like it plays toward the chicken-stock tropes of mono-green. Clean. Timmy. Fun. Under a microscope, however, the card actually gestures toward a unique strategy for the color. We can tap Patron of the Orochi to untap all green creatures and all Forests once each turn. Notice that untapping all green creatures includes Patron itself. If built correctly, this is a Seedborn Muse in the command zone. With instant-speed support and plentiful mana sinks, a Patron player can take an extra turn during each of their opponents’ turns.

With all of this in mind, let’s look at ramp and draw effects that can abuse and be abused by this commander.

The five most commonly played ramp effects on Patron of the Orochi’s EDHREC page are Sakura-Tribe Elder, Sachi, Daughter of Seshiro, Nissa’s Pilgrimage, Kodama’s Reach, and Zendikar Resurgent. Zendikar Resurgent both interacts with our lands and gives us card advantage for casting creatures, a perfect fit with the commander. Sachi also has some synergy, as she taps for mana. However, she seems suboptimal outside of a Snake or Shaman tribal deck. Sakura-Tribe Elder, Nissa’s Pilgramage, and Kodama’s Reach are all powerful ramp effects, but lack synergy.

Instead of these staples, I propose two sets of cards that will form our ramp package. First, let’s look at land enchantments.

Land enchantments work well to reach the high mana cost of our commander and they also juice his ability. For example, let’s compare Wild Growth with Sakura-Tribe Elder. At two mana, Steve fetches a basic land. Wild Growth, for one mana, enchants a land to tap for one additional mana. In a vacuum, they have the same outcome: one additional mana every turn. But with Patron of the Orochi in play, the enchanted land produces two extra mana every turn while the fetched land only produces one. The distinction becomes even more stark when we compare Kodama’s Reach with Overgrowth. With Patron, the Overgrowth-clad land produces four extra mana each turn, while the fetched land produces one. Sure, there could be some collateral damage from mass enchantment removal, but when we have the chance to make this much mana, why not take it?

There are also quite a few creatures that untap lands which slot perfectly into this ramp package.

Even without any land enchantments, these creatures will ramp efficiently. But once we add in the other elements of our deck, suddenly we’re tapping creatures to untap supercharged lands, then tapping Patron to do it all again. Arbor Elf is perfect at just one mana and the restriction to Forests is a nonfactor for our deck. Krosan Restorer might not do much early on, but if she hits Threshold, untapping three lands later in the game is absurd with Patron. Magus of the Candelabra is also a powerhouse here, with the ability to untap as many enchanted lands as we control.

After Zendikar Resurgent, two more mana doubling effects could be useful for us, effectively putting a Wild Growth on all of our Forests. Here we have two options. On the EDHREC page, Caged Sun is played in 46% of Patron of the Orochi decks, while Vernal Bloom is only in 35%. Although in this build of the deck I am including both, I think these percentages should be reversed. Caged Sun is extremely popular in Commander, seeing play in a total of 30,826 decks, and it is easy to see why. It’s an anthem that doubles your mana—an effect that can be good in almost any deck. But its popularity in other decks and colors doesn't mean it's the best option here. Vernal Bloom is a green enchantment and affects all forests, including our opponents’. It seems objectively worse at a glance, but Vernal Bloom only costs four mana. This may not seem like much for a deck that can generate twenty mana in a turn, but that slight disparity in cost can be the difference between playing Patron on turn four or five rather than turn six or seven.

Finally, I’ve added Seedborn Muse to add redundancy to our commander's effect and really juice our dream scenario, doubling our mana production on our opponents’ turns. Including Sol Ring I’ve included eighteen ramp effects to efficiently reach the eight mana needed to cast our commander. Now that we have a fountain of resources, let’s look at some card draw options to capitalize on all of that mana.

Going back to the commander highlight, we have a few ideas of what to avoid and what to pursue with regards to draw. First, we should probably lean away from most sorcery-speed draw spells that have a low ceiling. According to Patron’s EDHREC page, 40% of its decks play Harmonize even though I don’t think it’s synergistic or powerful here. Instead, let’s focus on draw effects that can make use of all the mana we’ll have.

Since we have a commander that takes advantage of creatures, how about draw effects that also synergize with our infantry?

In our deck, these draw effects that trigger on creatures entering the battlefield allow us to empty our hand, put pressure on our opponents, and restock at the same time. We should always be able to threaten the board while keeping gas in the tank. Path of Discovery is, admittedly, not necessarily consistent in many decks. Explore only draws if the top card of our library is a land. But Path of Discovery doesn’t specify nontoken creatures. I’ve included a few token generators to occupy our mana during our opponents’ turns, so Path of Discovery might actually be one of our best cards. It only sees play in 1,618 decks and can be an absolute powerhouse in a variety of strategies. It has quickly become a pet card of mine.

Draw effects that trigger when creatures with power 3 or greater enter the battlefield are also potent in our deck. Elemental Bond and Garruk’s Packleader share this text and compliment token generators that produce 3/3 creatures, like Centaur Glade and Soul of Zendikar. If we have Elemental Bond, Centaur Glade, and Patron of the Orochi in play, we can easily make at least three 3/3 Centaurs and draw three cards on each of our opponents’ turns. Even if we don’t draw a token generator, we have seventeen creatures with power three or greater to trigger these effects.

Taking a look at colorless card draw, we arrive at these two mana sinks. Diviner’s Wand is the cleaner of the two, allowing us to draw whenever we have a creature to wield it and four spare mana. Mind’s Eye is restricted by our opponents’ draw, but in this format we will usually have at least one opponent that’s trying to deck herself to win with Laboratory Maniac, and we should have the mana to keep up with all that draw. This is a card that frequently sees play in mono-white and mono-red decks to try to make up for a perceived deficiency. On its EDHREC page, the top five commanders that most frequently play it are white, red, or colorless. However, it may actually fit better in mono-green, where we’ll have more stray mana.

Including these, I’ve included eleven draw effects to ensure that we never lack something to do. Let’s put it all together and present a coherent, synergistic EDH deck.

Here is my take on a focused Patron of the Orochi deck that takes full advantage of Patron’s ability to ramp and draw cards effectively. Season to taste.

Among the notable inclusions here, we have Nemata, Grove Guardian, a token generator that can double as an Overrun. Setessan Tactics can easily be an off-Broadway Wrath of God—and becomes even better when we untap all our creatures to fight again. To swing in for the win, we have Kamahl, Fist of Krosa, Craterhoof Behemoth, Thunderfoot Baloth, and End-Raze Forerunners. If that doesn't work, we also have a potent combo with Squall Line, Crop Rotation, and Glacial Chasm. And, of course, we also run Helix Pinnacle.

Check it out below:

I hope this article helps you think about ramp and draw differently. Remember to EDHREC responsibly: always dig a little beyond the statistics. Thanks for reading, and please let me know what you think in the comments below!

See you on down the road.

#monomania, #patron of the orochi