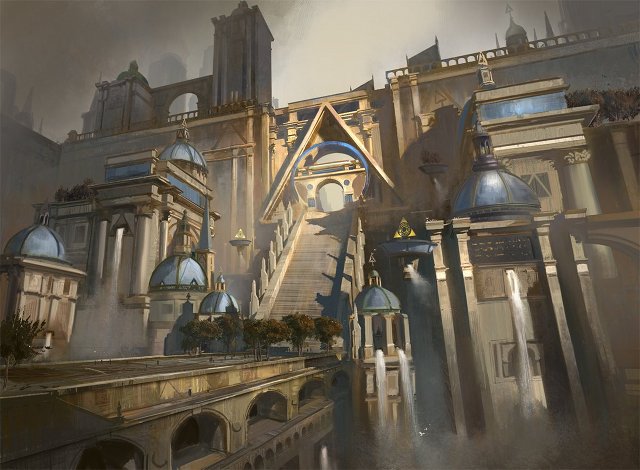 Our journey into the Pursuit of Knowledge series continues this week with the analysis of the extended Command Zone gameplay data for the Azorius guild. This guild articulates around 32 mighty commanders, tied for first with Selesnya as the guild with the largest contingent of generals. The EDHREC database contains 11,101 Azorius commander decks at time of writing. Contrary to some of the other guilds, whose strength revolves around one or two themes, the diversity of Azorius generals allows deck builders to explore a wide variety of strategies. Some commanders like Bruna, Light of Alabaster naturally lend themselves to Voltron, while others, like Grand Arbiter Augustin IV, provide the basis for a Stax environment. We also have the king of tempo, Brago, King Eternal and Hanna, Ship's Navigator, or the newer Raff Capashen, Ship's Mage, who fits well in more artifact-focused decks. A number of commanders provide us card advantage from the get-go. We can go tall or wide with tokens with Temmet, Vizier of Naktamun or tribal with Sygg, River Guide. This really is an interesting guild for deck builders!

We have seen a number of articles on Azorius in recent past on EDHREC. From Kya's excellent primer on Brago, King Eternal in Bringing Magic to Life - Flickering Idea to Patrick's Combo Corner - Taxes article on Grand Arbiter Augustin IV, the most popular Azorius commanders have been covered on EDHREC. Therefore it's a newcomer who deserves our attention today: Lavinia, Azorius Renegade.

I really enjoy the asymmetrical aspects of this commander. Lavinia limits our opponents' ability to cast spells under certain circumstances, and she might be quite dangerous if we can exploit this. Lavinia's first ability can limit our opponents from making use of mana rocks, and her second ability stops our opponents from playing 0-cost spells. This could affect our opponents' ability to ramp with 0-CMC mana rocks like Mana Crypt, spells like Pact of Negation, Summoner's Pact, the imprinted spell on Isochron Scepter or the cards exiled by Etali, Primal Storm. Lavinia forces our opponents to play fair, preventing them form cheating the cost of spells.

As part of our game plan, we will stall the board with an assortment of Stax spells to give us the leeway to draw one of our win conditions. The primary win condition comes from playing Knowledge Pool. If Knowledge Pool resolves and Lavinia is in play, our opponents will not be able to play spells from this point. Secondary win conditions come from using Aetherflux Reservoir to drain our opponents' life total, playing Approach of the Second Sun a second time, bringing Platinum Angel into play, or copying Dark Depths with Thespian's Stage to get an indestructible 20/20 token.

Azorius has good support for artifacts and they will be the key card type in this deck. We will select artifact spells that support our game plan. We will also include a number of artifact tutors and some spells that add a level of protection for our artifacts.

As with other articles in this series, we will present the best ranked cards that comply with the Azorius color identity in different categories, starting with the core categories: Ramp, card advantage/filtering, disruption, mass removal, standalone creatures, standalone noncreature spells, and lands. We will also introduce three categories specific to our deck: Stax, protection and reanimation. The cards that we retain for our deck have a colored background in the various tables and the rank of the cards according the extended gameplay data is listed in parenthesis beside each card name in the table. A rank will not be present if the card cannot reliably be ranked from the extended gameplay data. The tables presented in the various categories can be used as templates to build further Azorius decks.

The Azorius guild ranked card pool contains 637 spells and 138 lands. Let's take a look at them.

With no access to green ramp spells, we have to rely on mana rocks for the core of our ramp. Our Stax package contains a little bit of mass land destruction. If we can get a couple of mana rocks on the battlefield before triggering land destruction, we will still be able to progress our board state, while our opponents are stranded, unable to play noncreature spells.

The presence of mana rocks also enhances the effectiveness of cards like Paradox Engine, especially when Aetherflux Reservoir is in play.


Grand Arbiter Augustin IV lowers the cost of all of our color spells, but also adds a tax on all of our opponents' spell. Smothering Tithe, the new white ramp spell from Ravnica Allegiance, provides us ramp that can be set aside to play a couple of big spells in the same turn and also provides resources to reuse for tutor spells like Reshape or Arcum Dagsson.

For instance, one tutor chain leads us from Tezzeret the Seeker to Expedition Map to Inventor's Fair and to Knowledge Pool. Another chain consists in playing Recruiter of the Guard to tutor Spellseeker, to get Reshape to play Knowledge Pool. Muddle the Mixture can tutor Merchant Scroll, which can then retrieve Reshape to get Knowledge Pool into play.


The more powerful tutors comes from cards like Reshape, Planar Bridge or Arcum Dagsson that can bring Knowledge Pool into play directly, which makes it uncounterable unless a player counters the original spell or uses a spell like Stifle to counter the activated ability.

Outside of tutors, we do have a few classic card draw spells like Dig Through Time, Alms Collector, and Sphinx's Revelation to provide us some card advantage, and some spells like Brainstorm and Sensei's Divining Top to give us some filtering. Dig Through Time can help us find Approach of the Second Sun after playing it for the first time.

This deck is highly disruptive. As such, we will create two more specific disruption subcategories to highlight some of the important aspect of this deck. The disruption spells listed in the table below do not cover cards in the Stax or protection subcategories, as these are covered in their own separate sections. The disruption spells listed in this section deal with some of our opponents' biggest threats and provide us some resiliency in case our opponents attempt to tamper with our plan.

Our most important disruption spells are key components of our win conditions: Knowledge Pool, Aetherflux Reservoir, Approach of the Second Sun, and Platinum Angel.

We have a suite of counterspells to either stop our opponents from messing with our board or to prevent them from messing with any parts of our winning conditions. We display a mixture of counterspells, ranging from 0-cost spell like Pact of Negation that allow us to respond to an interaction on the board when we are tapped out, to more tempo-oriented spells like Cryptic Command.

The life gain from Fumigate may allow us survive a little bit longer and may also allow us to trigger Aetherflux Reservoir quicker.


In our land base, we have lands like Flagstones of Trokair, Darksteel Citadel and Drownyard Temple that can survive mass land destruction. This should allow us to recover quicker than our opponents to Armageddon and Cataclysm.

The Stax packages contains cards that prevents our opponents from progressing their own game plan.

Dust Bowl depletes our opponents' land bases. Coupled with Drownyard Temple, we can repeat this operation and affect our opponents' ability to cast noncreature spells with Lavinia.

Void Winnower makes roughly half of our opponents' spells unplayable.


Grand Abolisher lets us cast spells on our turn unanswered, preventing our opponents to deal with the casting of Knowledge Pool, any of the spells that may lead to it or any other spells that can give us the win.

Containment Priest is a good safeguard against reanimation effects.

The spells in this category prevent our opponents from getting rid of our permanents by making them resilient to their interactions.

With a power and toughness of 2, Lavinia is not a very strong creature. Lightning Greaves protects her from target removal or direct damage.

Leonin Abunas and Padeem, Consul of Innovation protects all the artifacts that are part of our winning conditions: Aetherflux Reservoir, Planar Bridge, Platinum Angel. Padeem will likely draw us some cards since half of our artifacts have a casting cost of four or more.

Teferi's Protection is our last line of defense if we want to stick around for another turn.

We have a few spells that bring some level of recurrence to our deck.

Crucible of Worlds grants us the ability to recur land removal with Dust Bowl and reuse the lands that tutor for cards or recover cards from the graveyard.

Conqueror's Galleon is not the most efficient reanimator, but its ability to also satisfy card draw and mana ramp categories brings consistency to our deck.

There is one slot left for a standalone spell to make it in to our deck.

Our average CMC is not very high (3.25). Paradox Engine may enable us to play several spells each turn. The life gain that we can get from storming with Aetherflux Reservoir with Paradox Engine's presence may prove too strong for our opponents.

We have a variety of lands that provide us mana fixing, tutors, disruption and recursion.

Tolaria West can tutor any land or any our 0-casting spells (Pact of Negation, Astral Cornucopia or Everflowing Chalice). Inventors' Fair can tutor artifacts.

Dust Bowl and Strip Mine can perform land target removal.

We have built a deck around Knowledge Pool to leverage Lavinia's second ability to prevent our opponents from playing spells. We have built our deck to slow our opponents down, granting us enough time to dig and play Knowledge Pool. We've added enough tutors to facilitate the retrieval of our key win condition, set up some protection for our key permanents, and implement some form of recurrence to support our plan of weakening our opponents' mana base and ensure we have continued access to cards that find their way to the graveyard. We have added a few alternate conditions as a backup plan. While building our deck, we have come up with a list of templates of the best ranked cards for the Azorius guild based on the extended Command Zone gameplay data. These templates can be reused to identify the most effective cards for future Azorius decks.

Lavinia's second ability to prevent our opponents from casting 0-cost spells is abused with Knowledge Pool in this deck. Other cards could be abused in a similar fashion: Dream Halls, Eye of the Storm, and Omen Machine. Dream Halls would require to rework the deck to have a stronger focus on reanimation, but the other two cards would fit in nicely with the deck.

In our next article, we will take a look at Gruul.

As always, I am curious to hear your thoughts and find out which cards you think would fit well in this deck.