Ranking Every Battlecruiser Card (8 CMC+) with EDHREC – Part 6: The Purge. 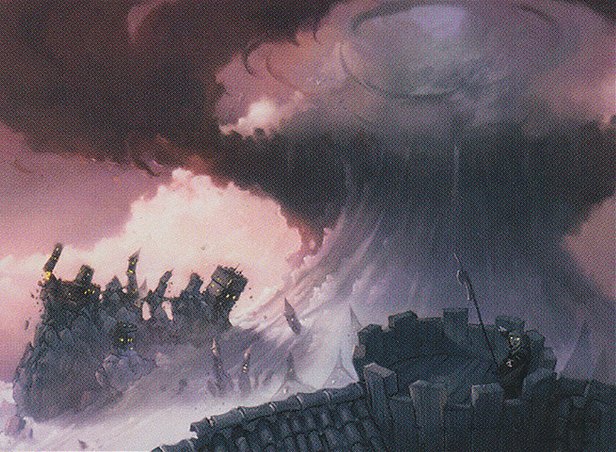 Hi there. Welcome back to this series where we rank every Battlecruiser card based on the number of decks they have on EDHREC. I'm Present Joseph, and I'm here to explain a bit of a hitch that came up in the process of writing this article.

It started last week when Past Joseph wrote the article for this week. He updated the data he had at that moment, wrote out the ten write-ups that you are about to see before you, and then moved on with his life. But you see, the data gods hate Past Joseph, and so on Saturday, they decided to remove a bunch of decks that passed the two-year deadline basically making all the data that Past Joseph has collected completely wrong.

Now Present Joseph (that's me) does not have time to completely fix this problem; due to a bunch of data nonsense, it would require basically rewriting this entire article completely from scratch. Instead, Present Joseph updated the data for these ten cards in isolation. Future Joseph will go through for next week's article and update everything, but it might mean that the placement of cards in this article no longer match their current placement.

TL;DR is basically the ranking and # of decks for the next few articles might not square up, but that's just the nature of writing about active, living data like EDHREC.

Also, it's only ten cards this week instead of fifteen because it turns out Past Joseph was especially ramble-filled this week. Enjoy!

Oh, Yavimaya’s Embrace. How cool you used to be! Stealing the best creature from your opponent, pumping up that creature, and giving it trample? How can you not love that?

Unfortunately, we are too far removed from that world, and now Embrace looks kinda silly. Eight mana is a pretty poor rate for a Mind Control. If you’re gonna play this, you might as well play Lay Claim or In Bolas’s Clutches, which are cheaper, have upside, and aren’t multiple colors. The +2/+2 and trample aren't worth the extra three or four mana you’re spending on this. Comparing this card to Spirit Away (which is less mana, one color, and gives a much better ability, and even that card’s barely playable) just really highlights how far we are from a time when Yavimaya's Embrace was worthwhile.

Over, Under, or Just Right? Overplayed: Great, now I'm sad.

You gotta love it when they introduce a commander that takes a bunch of random cards that nobody would ever play and pulls them kicking and screaming into the format. In this case, we can thank Mairsil, the Pretender! Mairsil gives all the terrible creatures with amazing activated abilities a brand new home: Minion of Leshrac, Shauku, Endbringer, Shifty Doppelganger, and the only one that costs eight mana, Infernal Denizen. Sure, Mairsil himself is a little too solitaire-esque for me, but these big battlecruiser creatures would see little to no play without Mairsil, so it's really nothing but a boon for the format. I’m all for it. Where’s the commander that lets me play Epic Struggle?

Over, Under, or Just Right? Just Right: If the downside wasn’t so harsh, you know some people would be trying Infernal Denizen in random mono-black ramp decks.

Of the random expensive Delve threats we seen so far, Sibsig Muckdraggers is probably the best. It’s a nine-mana Gravedigger, which is not great, but if your deck needs big mana costs for synergy reasons (Volrath the Fallen says hi again), then these cards can still do something, even if things go wrong and you end up actually having to cast one of them.

Over, Under, or Just Right? Just Right: I think I have a vendetta against Gurmag Angler. There is no reason for this card to see so much Commander play other than its fame from other formats.

Did you know you can’t play more than 100 cards? Sure, it’s not wise to play more than the minimum number of cards anyway, but Standard and Limited let you run a 200-card pile if you want to. Commander, though? Nope! You get exactly 100 cards, no more, no less. I guess they really hate Battle of Wits players.

Anyway, Invincible Hymn. You’re not gonna be able to cast this until late in the game, so you’ll probably have diminished its effect a fair bit by then. Unless you’re against a mill deck, you’ll still probably have at least 40-60 cards in your library, maybe even more. Hymn should usually set you back to your starting life total, at least.

That’s neat, but what deck wants a spell that says “your life total basically becomes your starting life total” for eight mana? Maybe Evra, Halcyon Witness? It is a bit hard to make Evra as big a threat when you fall to 25 life or so... yeah, I could see it. What about Selenia, Dark Angel? Those decks could use an emergency button if their Tainted Sigil gets Stifled. I even see Jodah, Archmage Eternal show up on Invincible Hymn's page, albeit only a small amount. This isn’t the worst spell to cheat out to pad out your life in board stalls, right? Oh, and Liesa, Shroud of Dusk! That’s kinda cute because you make a lot of enemies in Liesa, and this card can keep you alive a while longer.

Over, Under, or Just Right? Underplayed: Plus, opponents are gonna be so mad to lose to this.

So first off, if your opponent tries to remove this in response to the enters-the-battlefield trigger, then the leaves-the-battlefield trigger will go on the stack and resolve first, which does nothing, and then the ETB trigger will resolve, and they'll still lose their hand because the rules are weird. Basically, if Hypnox resolves, you’re guaranteed a Wit’s End on someone. That's kinda neat, I guess.

Sigh. It’s super annoying they put a cast stipulation on this because otherwise you could reanimate it or blink it and eat whoever’s hand is scariest at that moment. That’d be mean, but at least it would do something. As is, there’s basically nothing here. It's eleven mana to screw over one opponent. Might as well just play Wit’s End at that point. The M13 version even comes with a fun typo in the flavor text!

Over, Under, or Just Right? Overplayed: If you really wanna play something mean like this, look towards Awaken the Erstwhile. You will sit under the Havoc Festival and like it.

You might think that any card released in a Commander precon must be a busted Commander staple, or at least a unique roleplayer that's very good in certain decks. Turns out, that's not so. Let me introduce Naya Soulbeast, an eight-mana trampler that could very well end up as a 3/3 if you get unlucky. Are you not excited? Good, you shouldn't be.

It’s not even that fun of a card. It scales a lot better to more players, but even if you flip four copies of Draco, your only reward is a massive French vanilla creature. Whoop dee do! It’s not like Malignus really lends itself to unique gameplay. Big creatures are so dime-a-dozen that playing this one, which might backfire horribly, doesn’t feel worth it.

Over, Under, or Just Right? Overplayed: At least it’s not Awaken the Sky Tyrant.

Okay, um... I’m glad Convoke listened to my request from last article about Angel of Salvation, where I wanted it to prevent all the damage... but I did also like the 5/5 flyer that actually affected the board. Maybe next time we can… try and make a good card?

Over, Under, or Just Right? Overplayed: If I told you there was a Fog that cost eight mana, would you believe me?

Over, Under, or Just Right? Just Right: If your meta is full of Landfall decks, this can be a cool way to snipe specific lands and Wrath all the utility creatures when least expected.

This poor Elemental. Who the heck squeezed that helmet onto it? Not only does that not fit the ascetics of this creature at all, but the helmet doesn’t even fit, and the weird metal bar on the bottom is far too long for this creature. The Selesnya are monsters!

Over, Under, or Just Right? Overplayed: Don’t make your creatures participate in this travesty.

I personally don't have much issue with the ban list. There are certainly things I’d change or tweak, but generally, I think it does a fine enough job. The ban list can never be an end-all, be-all list of every card that can wreak havoc on the format, but at the same time, you really need to keep some things out of the format for the people that can only play online, or at their local 40-player LGS league where rule zero conversation are much harder to have. The list snipes the best but cautiously watches the rest, and I think that's a good approach in general. I certainly don't speak for everyone, but I don’t have much to complain about.

That said, I have always been a bit flummoxed that Worldpurge has never been banned. Worldpurge is the worst offender of setting people back to stage one by a country mile. Cyclonic Rift might be soul crushing, but at least it sets one player up to win the game. Obliterate leaves planeswalkers alone and can get 'got' by instant-speed indestructibility. Decree of Annihilation is cycled more often than cast, but it still leaves enchantments. Apocalypse leaves opponents' hands full. There are ways that each of these other cards could develop or shift the game toward a symmetrical reset that isn't actually symmetrical, leaving them room to end the game rather than just stall it.

Heck, looking at the two remaining mass wipes on the ban list! I think I’d rather play against Sway of the Stars and Upheaval because at least there you can float mana and kill me with it. I wouldn’t want to unban either of those cards, I’m just pointing out how awful Worldpurge is because it does nothing but prolong the agony. It puts everyone in exactly the same boat. Everyone keep their best seven and the game just limbo jumps back to turn 1. I have played against this card twice in my five years of Magic. One time it languished away in an opponent's hand, and the other was one of the most agonizing games I’ve been a part of. This card is super, super gross.

Over, Under, or Just Right? Just Right: Yes, I said Just Right, not Overplayed. Some people are really into this type of effect, and it does it really really well. I wish to never see it again, but I'm sure someone, somewhere likes it, and good for them!

Do Whatever Makes You Happy!

Well, I hope your holidays give you tons of joyful vibes! I'll catch you all on the flip side of my own restful celebration, but until then, please let me know what you think about this batch! Am I too much of a fuddy duddy for Worldpurge? Do you have nostalgic memories for Yavimaya's Embrace? Let me know in the comments. Until next week!