Ranking Every Equipment with EDHREC – Part 14: Give Me a Kall-dra 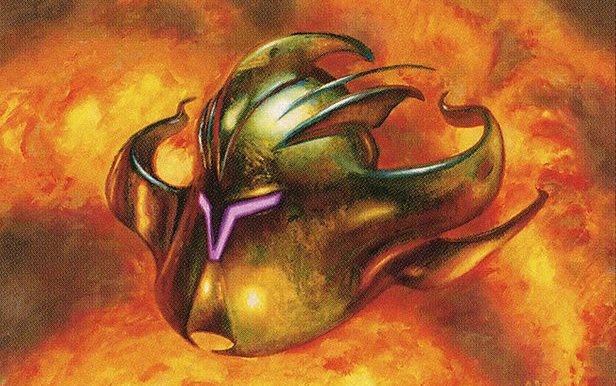 And None the Worse for Wear

Ahhhhhhhh, another traveler that completed the trek through the onslaught of spoilers. Yes, I see many like you stop here after a long journey of hype to recuperate and refocus themselves until they're ready to tackle whatever new challenges are there to face them.

There're two types of people that want to run evasion. There's the person putting Colossification on a Serra Avatar and not wanting that monster getting chump blocked by a Squire. Skeleton Key obviously isn't gonna do much for that player (unless you're really into 0/10 attackers, but only nutcases are into that.)

The other player is the person hoping that no one notices their Wildfire Eternal until they can find a Soulfire Eruption to cast off of it. Skeleton Key was made for these players. Skulk in not your traditional evasive option, but when you need incremental value creatures, like Sygg, River Cutthroat, to get into the red zone, Key is one of the best evasive options you can reach for.

Over, Under, or Just Right? Underplayed: Who’s there?!?

If you've somehow never seen these before, the Kaldra cycle is basically an Equipment mini-game. If you can get Shield of Kaldra, Sword of Kaldra, and Helm of Kaldra in play, you can use the ability on Helm to make a massive creature that can't be killed with a bunch of ludicrous Equipment attached to it. It's a cool concept, but to make it work, you kinda have to play a bunch of tutors and recursion, so you really have to build an entire deck around assembling it.

This writeup might be a little bit weird for more established players because I'm going to talk about why I think the Kaldra cycle isn't that popular, and at first glance, that might seem wrong. I mean, it's basically a giant running joke that Tomer from MTGgoldfish has been trying to win a game with Kaldra for forever, but, his memeing aside, Kaldra doesn't post the numbers of other MTG jank combos. Compare Kaldra to another Equipment favorite, Sunforger, and it's clear that Kaldra is way more niche. Compare Kaldra to most of the other build-around jank staples, like Maze's End, Simic Ascendancy, Villainous Wealth, or Helix Pinnacle, and the difference is even starker. The online presence of Kaldra might have grown, but have you ever played against a Kaldra deck? I've been playing for six years now, and I've never seen one!

Kaldra just doesn't spark the same jank desire as most other build-around cards, and I think the reason for that is simple: Kaldra doesn't win you the game. When you get the 100th counter on Helix Pinnacle, or cast Villainous Wealth for 30, you win in spectacular fashion. The effect shapes the entire game, and the joy of doing that is apparent and obvious. When you assemble Kaldra, the game doesn't definitively end. An indestructible 9/9 creature with a million abilities will probably win you the game, but it's not much different than killing with a Blightsteel Colossus. There's a lot of counterplay to it. The joke for assembling Kaldra isn't in what it does to the game, it's in the challenge being so silly that simply doing it is its own reward.

I was reading old Gatherer comments (does anyone know what those are anymore?), and all the comments for Kaldra were about the cool combos you could do after you already assembled Kaldra. People are dreaming of assembling Kaldra and then equipping it with Worldslayer, or casting Mirror Gallery, or Warstorm Surge. That's kinda indicative of Kaldra's appeal. The joke is in the absurd excess of it, and that's not only an incredibly odd joke, but it's one that really only makes sense to the most hardcore of hardcore players. Don't get me wrong, I love Kaldra. I'd build a deck myself if it didn't cost $2,000, but there's a reason that it's only in 1,500 decks.

Hmmmmm, I wonder if there are any tribal decks that Konda's Banner would be good in. I mean, there are a lot of restrictions on this card, so I don't know if it's super applicable to every tribe, but here are some good ones just off the top of my head: Allies, Bears, Beasts, Birds, Cats, Centaurs, Cephalids, Clerics, Devils, Dogs, Elementals, Faeries, Goblins, Harpies, Humans, Insects, Kithkin, Merfolk, Minotaurs, Monks, Ninjas, Oozes....

What's this, then? A seven-mana derpy double-faced card? Sure! I can get behind a card like Elbrus, the Binding Blade that lives and dies on flavor. Here’s this demonic blade forged in a secret ritual. It makes sense for it to be clunky and overcosted, yet powerful: you need to put in a lot of effort to find finding and casting this blade. It’s not gonna be good, but it’s gonna be fun, and quirky.

It has to deal damage to flip? No problem. One mana to Equip makes this way easier. Once you get this down, it’s gonna make any creature a fairly large problem, and if you really commit to it, you can even run unblockable creatures like Invisible Stalker, or instant-speed Equip cards like Brass Squire. Once you get this Equipment, you can easily get it flipped in a couple turns.

What about that flip side, Withengar Unbound? You know, the one that dies to every Swords to Plowshares, Murder, Pacifism, Griptide, or Goblin Cannon under the sun? That’s a bit trickier to justify. It's like the Kaldra thing we discussed above, but even less flashy and more fragile. At least when I go off with Kaldra, it takes a lot of effort for my opponent to disrupt it. Here, even when I happen to draw and flip the Elbrus, my opponent can undo all that hard work with any removal spell. Sure, Elbrus is easier to pull off, but it still looks like a lot more effort than is really warranted.

Over, Under, or Just Right? Overplayed: Maybe if you really lean into building around this card and run cards like Sheltering Light, then it would be more fun, but it’s not quite cute enough to be worth it for me.

Always a little awkward for me to encounter a card that references another card when that referenced card is higher up on the list, and we haven't had the chance to discuss it yet. Darksteel Axe is a reference to Bonesplitter, which was from the original Mirrodin. One more mana to Equip, but it's also indestructible. Neat! However, since Axe cost two to Equip, and no one ever really wants to kill your small derpy Equipment, the indestructibility doesn’t actually matter, so you might as well play Bonesplitter.

Over, Under, or Just Right? Overplayed: Now here's the true question: is Darksteel Axe better than Short Sword? The answer: I hope it never comes up.

I’m so boreeeeeeeeeeeed! Armory Iron is so slow! Yeah, maybe it’s a bit faster in Mowu, Loyal Companion or Skullbriar, the Walking Grave, but it’s still gonna take forever. The slow-as-molasses process of attacking, then getting a counter, then attacking, then getting counters, and I can't take it anymore! I’m putting Barbed Battlegear on my dork instead. That way I won't die from the sheer tedium!

Over, Under, or Just Right? Overplayed: If I wanna be slow and repetitive, I’ll start looping Memory’s Journey and Riftsweeper, thank you!

It shouldn't surprise anyone that there are a million combos with Deathrender, usually involving something like Yomiji, Who Bars the Way returning the creature you have Equipped with Deathrender back to your hand, and putting that same creature back in play. It sounds pretty obtuse, but it's simple once you see it laid out.

That's cute and all, but I'm actually more on board with Deathrender as a fair, stupid card. Like, imagine this in Garna, the Bloodflame. It's not infinite anymore without a lot more help, but you can do stuff like play Gonti, Lord of Luxury every turn. That sounds fun!

Over, Under, or Just Right? Just Right: I also expect this card to be like $30 within the next two years. They're gonna make a commander that easily break this card very soon.

Over, Under or Just Right? Overplayed: This is also a colorless way to make white creatures. I don't know what jank can be done with that, but I trust the internet to come up with something.

I don’t think I mentioned the Ring cycle when Ring of Evos Isle came up. Pretty weird cycle of Equipment that had an on-brand mechanic for the color, and then put counters on creatures of a specific color. For example, Ring of Thune is the white member of the cycle. It gives vigilance as a traditional keyword, and then the creature gets a counter every upkeep if it’s white. I wonder why I didn’t bring this up before now.

Oh, I remember now: because "Augggggggggggggggggh!" The Rings are even slower than Amanda Ignatius from earlier. It’s gonna take an eternity for those counters to actually matter. While the Equip cost on these rings is super cheap, I’m gonna have high expectations for that unique ability to make up for the downside. Vigilance most certainly does not meet those expectations.

Over, Under, or Just Right? Overplayed: This is almost exclusively a Dragonlord Ojutai card. Honestly, I think the only reason this card's numbers are higher than the blue one is because it got reprinted in Wyleth. Precon effect strikes again!

Grafted Wargear is about as close as you can get to making an aggressive Equipment that's relevant in Commander. Three power for free anytime you want is a pretty impressive rate for Equipment decks, and that's the primary reason you're going to want to run this card. If you're playing Equipment Voltron, you're only ever attaching this to one creature anyway!

However, there is secondary application in the sacrifice ability. Being able to sacrifice your creatures is appealing for decks like Varchild, Betrayer of Kjeldor, but there're much easier ways to do that. The real reason you'd want this card is if you care about the power boost, and when you do, it can be very potent. I’ve started jamming this in my Voltron decks and have been very happy with it. It's not for every deck, but it's fantastic in the right one.

Over, Under, or Just Right? Underplayed: Yeah, if for some reason, someone destroys this Equipment, it also kills the creature attached to it, but Voltron dorks are not long for this world anyway. Might as well make the clock as fast as possible.

My Poor Child, Just Outside the Top 100

I do hope you will rest here a little while longer. Next week, we will be into the top 100 Equipment, so the heaviest hitters will soon be in our sights.

However, if adventure calls at you again, let me know what you think about these Equipment in the comments. Do you have a Kaldra or Elbrus deck? Does Grafted Wargear pique your interest? Let out your thoughts in the comments. Until next time, traveler.