Ranking Every Land with EDHREC – Part 32: Join the Cabal of Coughers 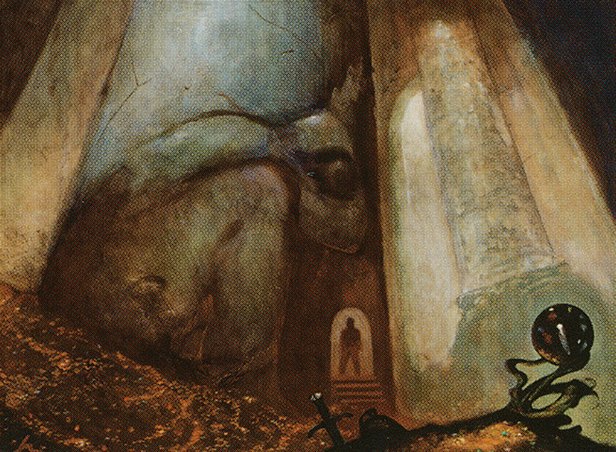 Welcome back to this thing I created, where we rank every land based on how many decks they have on EDHREC. We've only got three articles to go; we're on the second-to-last article of our journey!

No, that sounds stupid. There's gotta be a fancy word like penultimate for something that's two before the final.

I'm never gonna use this information in real life. Thanks Magic articles for filling my brain with things!

I am super happy these got printed in Commander 2019. As of writing, these are about a dollar each other than Canopy Vista, which wasn’t printed for some reason. I’m hoping these can join the Pantheon of the Painlands as new budget standbys. They're easy upgrades for any budget manabase. Two- and three-color budget decks are often very heavy on basics, so these entering untapped is pretty certain. Even five-color is often leaning heavily on green to search out basics. They won’t enter untapped 100% of the time, but they can enter untapped a majority of the time with some crafty deckbuilding. Late-game, these will enter untapped most of the time; at that point, they're basically better shocklands

Even as the prices increase, these are still good lands. Any fetchland manabase will probably benefit from one of these as a way to ensure certain fetches are still relevant. The fewer basics you run, the less likely these are going to enter untapped, but anything but the highest-power decks will run a few basics, and find them fairly often with cards like Wayfarer’s Bauble. These are quickly becoming a favorite of mine, and I hope they print an enemy color cycle of these to make budget players' lives a little easier

Over, Under, or Just Right? Underplayed: Please keep these cheap, Wizards!

I flip back and forth between these being neat budget lands and stone-cold unplayable. Upside, playing these effectively draws you a land because it taps for two. Downside, the worst feeling in the world is playing these on turn two and having to discard. Upside, they tap for two colors of mana, which can be abused with cards like Frantic Search. Donwside, they can't be played on turn one, and even late game they can be very awkward, especially if you have to pick up a tapland. Upside, these work great with lands that have enter-the-battlefield abilities like Bojuka Bog. Downside, they are terrible against any sort of land destruction.

Some games I play these and they smooth out my early game mana. Some games I draw them on turn four and hate life. I think they’re okay as another Guildgate or random tapped dual land, but I wouldn’t play them beyond that. Once I add the Shadow lands, The Painlands, and hopefully the new Tango Lands to a deck, these get cut pretty quickly.

Over, Under, or Just Right? Overplayed: I know some people like these a lot, but I think they are only passable, and that's on a good day.

The last of the Blighted cycle, and basically the only one I think is worth running (okay, maybe Blighted Steppe is, as well). It’s a really good card as a pseudo-ramp spell but a pretty terrible way to fix your mana. I see four- or five- color decks running this as a ramp/fixing spell on a land, and that seems very clunky. A colorless land that doesn’t accelerate or color fix you till turn five is not good.

Where it is good is as a land-based way to trigger Landfall twice. That's ludicrous in any Omnath, Locus of Rage, Tatyova, Benthic Druid, or literally any land-based deck. It also goes to the graveyard, which a certain Frog or tree lady thing might like. In those decks, Woodland can be very good, but if you don’t have that synergy, just run another ramp spell.

Over, Under, or Just Right? Overplayed: This is just pointed at people trying to fix their mana with this.

Cabal Coffers is an incredibly good card. With Urborg, Tomb of Yawgmoth, it can be a land that taps for 10+ mana, and if you can afford the price, play it in any mono-black deck. This is the "objective" review of Coffers. Everything that comes next is a very subjective view on why I understand that it's a good card, but why I personally don't like the fact it exists.

I mentioned that Gaea’s Cradle doesn’t eliminate deck ideas or that I felt like not having Cradle doesn't makes your deck worse in a substantial way. I don't feel the same way about Coffers. Maybe I’m just salty that I don’t own one and they won’t reprint it, but a lot of cool decks and ideas are just made less cool by Coffers and Urborg existing, Oh, I want to build Chainer, Dementia Master. Well, the best way to do that is to use Urborg/Coffers to activate him several times. I want to cast giant X spells like Torment of Hailfire. Well, Coffers grants the biggest, bestest X spells, so that should be a linchpin of the strategy. I want to win with Helix Pinnacle. Coffers does that easily. It’s just sort of the default answer to anything involving mana.

There're a lot of reasons that Coffers bugs me and that Cradle doesn't. Cradle takes up one slot, maybe two or three if you're running land tutors. Coffers and Urborg is at least two, and probably more, as you need ways to get Coffers back, and untap Coffers, and maybe tutors to find it and Urborg. Cradle is only truly annoying in high-power tables, whereas Coffers is a scourge at casual tables and is still very good in all but cEDH. Cradle is usually in mono-green, where you probably won't see as often. Coffers is in mono-black, which has loads of random tutors that can find it for you, even if you aren't built around the card..

But my biggest issue is that Coffers doesn't have that much competition. Green has all sorts of ways to make stupid amounts of mana outside of Cradle. Mono-black has the standard mana-doublers like Caged Sun and Crypt Ghast, but that's it, and none of them work as well as Coffers. Magus of the Coffers isn't a replacement. There's just no way to duplicate the effect of Coffers with the same level of efficacy. So I begrudgingly accept Coffers as a natural part of decks, but I don't like it.

Over, Under, or Just Right? Just Right: The card is frustratingly good, and if we can’t remove it from time, can we at least get a reprint in Modern Horizons 2?

Oh no! I have to have three artifacts in my artifact deck to turn this on, how insurmountable!

Yeah, this card is trivial to play in any artifact deck. I’ve played it in mono-green just because it's that easy to turn on. A mana rock, a Lightning Greaves and a Mirage Mirror gets you there, and then you can tutor for, I don't know, Credit Voucher; the sky's the limit.

Over, Under, or Just Right? Just Right: I'm assuming the price tag is the only reason only 63% of artifact decks are running this.

I always look at this land and think that it’s mediocre, but then I immediately thank the stars when I draw it. It looks like another Memorial to Folly, but the combination of being untapped, colorless, and the fact that artifacts are tougher to get back means this card is actually pretty good. There are games where I think I’m going to lose, only to remember I have Buried Ruin and can return that Keening Stone or Throne of the God-Pharaoh. On paper, it still looks like a colorless land that just doesn’t do enough, but I’ve never not been happy with this card.

Over, Under, or Just Right? Just Right: Don’t sleep on it.

Let's talk about the ally checklands, too (same text, ally colors), as they're showing up later. Putting them as one entry isn't exactly fair, as they technically were printed in different blocks.

I was expecting these to be more expensive due to them being legal in the new format on the block, Pioneer, but the most expensive of these is still about $5. Will they remain this way? I don't know. Right now they are an excellent grab for any budget deck, and, frankly, most non-budget decks. They're like the Tango lands but even easier to ensure that they enter untapped. Most decks will have a basic or a shockland out early in the game. Any green deck can Farseek for whatever is needed to help make sure these enter untapped. Any five-color deck is either budget enough that they still run a decent set of basics or expensive enough to run enough shocks to make these work. They aren't cEDH playable, but beyond that, the checklands are about as budget-friendly, and "high-power" viable as you can get.

Over, Under, or Just Right? Just Right: They are the definition of workhorse lands.

Reflecting Pool is weird. If it taps for five colors of mana, then that means you already have lands that tap for five colors of mana, so Reflecting Pool doesn't really "mana fix" you, per se. This restriction doesn't make them great in two- or three-color decks, but four- and five-color decks need all the rainbow lands that they can get. One land that taps for five color isn't enough: they need, like, twelve. Have you seen the mana costs of Slivers recently? It's like a color explosion! I think that this is, like, the fifth-best rainbow land after stuff like Forbidden Orchard and future lands on the list, but fifth-best is still going in any five-color deck that can afford it.

Over, Under, or Just Right? Just Right: You know what I'm gonna say: reprint, please?

And the ally checklands... I couldn't fit all the checklands in one segment without it looking silly or losing the average, so now I have nothing else to say. What else am I supposed to talk about?

What’s the tier list of hand-held desserts? Cupcakes above muffins, obviously, but where do popsicles rank? Is ice cream hand-held? Ooh! Empanadas gotta be near the top!

Over, Under, or Just Right? Just Right: Is a Belgian waffle handheld?

And here we have the most played budget Strip Mine! Although with Tectonic Edge becoming cheaper by the day, and with Field of Ruin going through multiple Standard sets now, it may not hold that title for long. On pure playability, Ghost Quarter and Tec Edge are neck and neck. Quarter is free to activate and has some very niche applications where you can Quarter your own land for an advantage. Tec edge is slightly cheaper, doesn't fix opponents for mana, and has a pretty meaningless downside. I'd probably give the edge to Quarter, but it's a tiny edge. They both get rid of troublesome lands, (*CoughCabal Cofferscough) just fine.

Over, Under, or Just Right? Just Right: Don’t feel like you have to spring for Strip Mine. This card is a perfectly reasonable replacement

Well, I leave you till the postantepenultimate article. In the meantime, let me know what you think about this week's article. Are you a fan of bounce lands? What's your opinion on Cabal Coffers? Let me know in the comments. Until next week!