Ranking Every Planeswalker with EDHREC – Part 6: This is How Gideon Died 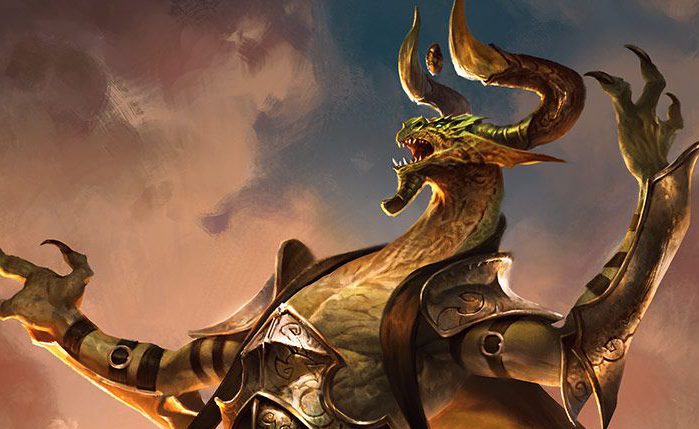 We love you, Gids. And we miss you. But like... only sometimes. Cuz some of your cards do make me raise an eyebrow, not gonna lie. But I'm getting ahead of myself! Let's riff on some fun cards by ranking every planeswalker based on the number of decks they have on EDHREC!

I was surprised to learn that Garruk Relentless will actually flip to about 45 of the top 100 creatures in the past two years, so odds are good you can find something to fight that won’t kill him. Even if there's not a good target, you can resort to making a Wolf and then fighting it the turn after. Once it does flip, it’s a pretty good 'walker. The +1 can protect Garruk on the ground, the -1 is a pretty excellent tutor, and the -3 can kill quickly in most Golgari decks.

However, that’s all assuming Garruk gets to activate any of those abilities. The biggest issue with Garruk is that he’s even more fragile than 'walkers usually are. He’ll only have a maximum of two loyalty when he flips, so you have to go super level omega in protecting Garruk. I would wager that most Golgari decks don’t want to throw key engines like Meren of Clan Nel Toth into potential trades to keep Garruk alive, but if you’re in a deck that's willing to put in the effort to protect him, Garruk will certainly reward you for it.

Over, Under, or Just Right? Just Right: He takes a lot to be good, but he seems worth it.

I've been holding back a general pontification on planeswalkers that I need to get off my chest, so bear with me. I have a friend of mine who’s definitely more on the casual side of the game. When he first saw the uncommon 'walkers from War of the Spark, he hated them. He said they took away a lot from the uniqueness of planeswalkers, and while I like a lot of the uncommon 'walkers, he’s not wrong. While the special status of 'walkers had been slowly dying for a while, I think War of the Spark decisively killed it

It's not that 'walkers like Angrath, Captain of Chaos are bad. I’d play Angrath basically just for the static ability, and maybe occasionally make a dork as sacrifice fodder. It’s a fine card, but it’s not really on the same level as Teferi, Hero of Dominaria, or Liliana of the Veil. If this was the first 'walker you had ever seen, you wouldn't run and show it to your friends. None of the uncommon 'walkers feel flashy in any way, and them being uncommon takes away the last vestige that made planeswalkers unique: the mythic rarity. No longer is owning a planeswalker a special achievement for new players to work towards. They're a dime a dozen now.

In a lot of ways, this is a good thing. Having 'walkers be more available means more players can build decks like superfriends and have access to the unique ways that planeswalkers affect games, but, on the other hand, I think that they've changed how 'walkers are perceived in the long term. Magic players like knowing the history of their game. Even if we go ten years into the future and 'walkers get a new super duper ultra rarity, people will still be able to boot up Scryfall and find these uncommon 'walkers. These are now a benchmark for the card type.

Well, I'm done navel gazing. Let's transition from that by talking about a terrible card.

Seriously, I am shocked we're only now getting to Gideon, Champion of Justice. Sure, it's not every day that you see a super Obliterate as a planeswalker ultimate, but everything else surrounding that ultimate is so bad. The +1 can get Gideon super close to the ultimate, but it’s counterintuitive. If Gideon gets four loyalty counters off it, that means four creatures can swing at Gideon’s face. The only other thing he can do is become a swole boy and attack, which also doesn't protect him in any way. Basically, most of the time, Gideon's gonna enter the battlefield, stand triumphantly, and then crumble to the floor and die.

But let’s say for the sake of argument that you can completely lock combat with, I don't know, Moat plus Gravity Sphere, and you get Gideon up to the point where he can eat the world. Do you even want to? If Gideon can ultimate, you probably have other cards in play that are protecting Gideon, and, by extension, protecting you! Sure, you could blow up the world, but all you’re left with is Gideon, who's probably on three or four loyalty, so it’s gonna take an eternity for you to kill people with it, and now you’re public enemy number zero! Any opponent that recovers is going to make sure you die a swift, painful death. How about instead of doing any of that, you just win with the board state that kept Gideon alive in the first place?

Over, Under, or Just Right? Overplayed: I was honestly expecting this in the bottom 20 or 30. I'm flummoxed.

My inclination was to disregard Samut, Tyrant Smasher because there’re much better ways to give creatures haste, and that’s true, but a lot of them are in the $3-10 range. If you're looking for mass haste enablers under a dollar, the only one that's not fragile or conditional is Fires of Yavimaya. Yeah, Fires is obviously better than Samut, but I've definitely played decks that wanted more than one mass haste-enabler, so she's definitely playable. That said, if you aren't playing an uber-budget deck, you can do a lot better.

Over, Under, or Just Right? Overplayed: Speaking of haste-enablers, Surrak, the Hunt Caller doesn't get nearly the respect he deserves.

I kinda talked about Nicol Bolas, the Deceiver when Visage of Bolas came up in my mana rock series, and my opinion hasn't really changed. While we've certainly seen worse abilities in this series, Bolas’s +3 is still really bad. You drop this eight-mana planeswalker. You tick it up once, and 99% of the time opponents are just going to lose three life, then Bolas just sits there like a child, huffy that his Mom didn't buy him ice cream, and then opponents kill him. The minus and the ultimate are both pretty decent abilities, but it really does come down to him being eight mana for a useless plus ability.

However, none of that matters because the most popular of all the planeswalker tribal decks is undeniably Bolas Tribal. They even have their own commander in Nicol Bolas, The Ravager. Much as I've mentioned my confusion with the archetype, if you were playing Bolas tribal, and you weren’t playing Nicol Bolas, the Deceiver, I’d ask what the point was.

It bugs me to no end that there's no comma in this card's name. Look: Jace, the Mind Sculptor, comma; Nicol Bolas, the Deceiver, comma; Tezzeret the Schemer, no comma. Is Tezzeret's full name "Tezzeret the Seeker"? Should we be calling him "Mr. The Seeker" It should clearly be Tezzeret, the Schemer, but noooooooooooooooo.

My editor said to stop being pedantic, so I guess I'll talk about the card now. Tezzeret the Schemer is slow. He's not bad. The Lotus Petal that he makes with the +1 is generally going to be useful until the very late game. His -2 can basically kill anything in an artifact deck, and it can even pump a creature occasionally. It just takes a while before you really get a decent amount of value out of him. Just using the +1 or -2 once isn't worth it. Even the ultimate takes time before it really snowballs out of control. There’s a lot of artifact decks that just don’t have time to coddle Tezzeret, but if your deck's a bit slower, he does a lot of good things overtime. I kinda like him. He’s certainly not the best Tezzeret, but at under $2, I think he could see more play.

A few years ago, I might have played this as a way to copy spells on a permanent, but, funnily enough, between Primal Amulet, Pyromancer’s Goggles, Lithoform Engine, and many others, we probably have too many ways to do that now. Heck, we even have Ral, Storm Conduit, and he's $2 cheaper than Chandra.

Over, Under, or Just Right? Overplayed: Sorry, Chandra. You just don’t spark my interest anymore.

It’s kinda strange to me why this Sarkhan is seeing play in Dragon decks over Sarkhan the Mad. Sure, Sarkhan Vol is a way to give things haste, but, as I mentioned before, we have so many better ways to do that, and he really does nothing else for the deck.

Over, Under, or Just Right? Overplayed: I’m almost more on board with him in a theft deck. He's a fine Threaten effect that still does something on an empty board, but even then he's not great.

Okay, call me Jevin, because I gotsta challenge the stats here! Most of the play that Huatli is receiving is in toughness aggro decks like Arcades, the Strategist. Arcades is a lightning rod for removal because, without him, the deck is just a bunch of 0/10s that don't do anything, so playing cards like Huatli means that these decks always have this effect.

I get the idea. However, these decks need to be able to kill people fast! They need as many creatures with big butts out as early as possible so that they can slam down their commander and kill people before they can defend themselves. When Arcades is out, Huatli does nothing, and only slows the deck down. Every time I face an Arcades deck and they play a card like Huatli, I breath a sigh of relief, because they're slowing down their pressure for marginal benefit.

I will concede that it’s useful to play one extra way to have the same Arcades-like effect, but that should almost always be High Alert or maybe Assault Formation. Those two are the best. They get a pass. Huatli does not, and she should be cut for more protection spells, like Eerie Interlude, or recursion spells, like Dusk//Dawn, instead.

Over, Under, or Just Right? Overplayed: I'm fine with Huatli in decks like Ikra Shidiqi, the Usurper, but when your commander has this type of effect, I think she's really redundant.

The longer that planeswalkers are printed, the more niche the designs have to get. We saw how many Chandras were just punch something on all three abilities, so in order for 'walkers to keep doing original things, they're gonna have to start being less generic.

This is not a bad thing. Sorin, Imperious Bloodlord is a really powerful card, and it can do some cool things, just only in a Vampire deck. My favorite thing is that -3. You need a good density of Vampires to actually make it happen, but turn-three Nirkana Revenant or Vona, Butcher of Magan, and you still get to keep Sorin around seems like an excellent payoff!

Over, Under, or Just Right? Just Right: I wouldn’t say that you couldn’t play Vampires without spending $15 on Sorin, but it’s a really excellent card for the strategy.

Imperious is a Good Word. You Should Use it More Often!

Well, I hope you play some fun games of Magic soon! Let me know what you think about these 'walkers. Can the allure of planeswalkers be saved? Do you think that I was too hard on Huatli, the Sun's Heart? Let me know in the comments! Until next week!