Not Gruul? THEN DIE!

Hello, and welcome to EDHREC's set review for Ravnica Allegiance! Right out the Guildgate, let me be honest: the Gruul color combination hasn't ever truly resonated with me. However, this set is looking awesome, which means it might be time for that to change and for me to lean into the realm of the SMASH. As I understand it, the Gruul have no need nor time for pleasantries, so let's get to it!

Let's start this article off with a bang! Cindervines was one of the last rares spoiled in the set, but that didn't temper my excitement. I love cards that do incidental damage, and this Gruul-shifted Kambal, Consul of Allocation does just that. While a single point of damage isn't that threatening, I think that's actually a good thing, since it can therefore fly a little under the radar. This ankle-biter of a card will just sit on the board pinging our opponents while they ramp; the fact that it's only two mana is a great boon.

If it was solely a pinger enchantment, I don't think I would include it. Luckily, the Gruul know how to get extra mileage out of most of their cards this set. For a single mana, we can trade the enchantment away from a Destructive Revelry. Usually permanents that trade themselves away for different effects will sit on the board, never activating their abilities to their full potential, so there are questions if their inclusion is warranted (for example, Crop Sigil or Mardu Ascendancy. Unlike them, Cindervines can sit around pinging until we really need to cash in. This is not only one of my favorite Gruul cards of the set, but one of my favorite cards in the whole set period. Make some room, Destructive Revelry, you've got company!

I like Domri, Chaos Bringer a lot, although I can't help but laugh that his second iteration fell into the large pile of other four-drop red-green planeswalkers (Xenagos, the Reveler, Samut, the Tested, Sarkhan Vol, there're really quite a lot of them). That said, I actually like him the most when compared to his contemporaries. While his +1 doesn't have as high a ceiling as Xenagos, the Reveler, I appreciate the ability all the same. I really enjoy the Riot mechanic, and it's awesome to see it showcased on such a high-profile card.

Domri has certainly learned some new tricks, but he hasn't forgotten his roots. Chaos Bringer's -3 is the same effect as his first iteration's +1 ability, but with some added juice. Going four cards deep is the sweet spot for decks that want this effect, and occasionally we'll be able to grab two creatures for our troubles. I am not well-versed in statistics, but I'm sure someone could tell us the percentages for how many creatures we need to get value from that ability. Since we're playing creature-dense colors, I doubt we'll have to go too far out of our way to make sure we get maximum value.

While not "game-ending" in the immediate sense, Domri's ult will, in time, do just that. In the average four-player game, creating 16 power worth of trampling creatures over a turn cycle will be both back-breaking and player-breaking. Also, he does indeed ultimate with Doubling Season. So if every other walker in the game that does the same thing with Doubling Season didn't give you reason to blow it up immediately, here's another reason to do just that.

Nikya of the Old Ways

Now this is a legend! While I won't hash out my confusion as to why the rare Gruul legendary isn't Ruric Thar - I'm sure there are lore reasons we've yet to uncover - I have to say that I am pleasantly surprised by Nikya. She certainly "feels" Gruul, which is just as important as a card's mechanics.

Having a Mirari's Wake in the command zone is an awesome benefit, and a 5/5 for five isn't bad at all. We're not saddled with a fragile commander to gain access to double mana. Not only that, but Nikya comes with a restriction. Restrictions can be viewed as a bad thing, but for a legend with a "generic" ability such as mana doubling, it gives us a direction to mold our deck around.

I don't think Nikya will be the most popular commander in the set by the numbers, but I do think she'll be fighting tooth and hoof for the #3 slot with several of the other legends. I'm excited to see what people come up with for her. My recommendation? Hydra tribal. Double your mana, make huge creatures. It's especially apt because those Hydras tend to have activated abilities. For example, Polukranos, World-Eater or Hyrda Broodmaster, and activated abilities are a great way to 'cast spells' without breaking Nikya's restriction.

I won't lie, I was pretty disappointed when Ravager Wurm was spoiled, but I think that has to deal with one line of text versus the whole card. For six mana, we get a 4/5 that gives us two choices once it dodges counter spells. The first is Riot; we'll get a hasty 4/5 or a 5/6. That's a decent size, but I'd hope for larger from the Gruul or at least a keyword like Trample.

Next is a modal enters-the-battlefield ability. We can either fight a creature or blow up a land with an non-mana activated ability. A modal fight spell? Being able to choose the terms of our fighting conditions with Riot is great versality, and I really enjoy the exploration of that design space.

The second choice is where my pessimism comes from. I want to like this card, but at Mythic, I really think that it should be able to blow up a nonbasic land without questions asked. Yes, there can be feel bad moments, but this card feels gimped because of that. Does that mean this card is bad? Of course not, but that does shape my overall perception when maybe it shouldn't.

Rhythm of the Wild

Move over rares and mythics, Rhythm of the Wild is my favorite Gruul card in the set. I've always had a love-hate relationship with "can't be countered" effects like Vexing Shusher and Prowling Serpopod. Being able to push our creatures through counterspells is a great ability to have, often the cards are dead at a table without a very controlling player. That's where this enchantment breaks the mold.

Giving all of our nontoken creatures Riot is a great ability on its own. In one way, it's a modal Fervor, a card that currently sees play in 6,300 decks. If we look at a Fervor with upside, we'll see that Hammer of Purphoros is played in nearly 10,000 decks. While Rhythm of the Wild won't reach those numbers by virtue of being multi-colored, I think we'll see it in a proportionally higher number of decks because of the versatility; Fires of Yavimaya, for example, shows up in nearly 8,000 lists, and I personally like the option to give our creatures a permanent +1/+1 counter over a temporary +2/+2!

Having both of these effects on a single enchantment is an awesome benefit, and this is a card that is truly greater than the sum of its parts.

Here's our Dragon of the set! While the choice of Riot will vary more in Limited and Standard, I think choosing the +1/+1 counter will be the correct move most of the time in EDH. That is, unless we're playing this card in a +1/+1 counter deck. Otherwise, we're paying five for a french vanilla flyer, and I don't think that's worth it in EDH over the other options that we have access to.

Let's make the assumption that the Hellkite will have a +1/+1 counter. Having access to a repeatable Twin Bolt is nice, even if it's a bit expensive. I've learned to never underestimate on-board tricks though. Being able to hit any target (or two) will be good to keep pesky planeswalkers and low-toughness commanders like Mizzix of the Izmagnus in check.

Gruul-color shifted Trygon Predator! Sunder Shaman joins the Predator as yet another creature that blows up artifacts and enchantments on combat damage. While "stalking" isn't as good at evasion as flying, it'll still help, especially when attached to a massive 5/5 body for four mana. It's a bit greedy, but I would have loved to see this with Riot. Perhaps we can just use Xenagos, God of Revels to make sure it gets both haste and a power boost! Gruul Smash!

Trygon Predator is included in over 7,000 decks on EDHREC, but I don't think Sunder Shaman will reach those heights. Even so, it is one of my favorites of the CCDD cycle across the Guilds of Ravnica block. 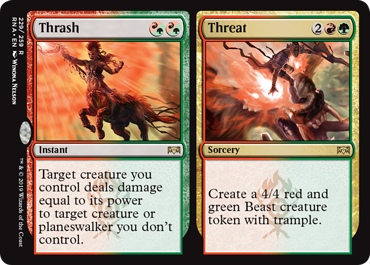 If the Thrash portion of this split card wasn't at instant speed, I probably wouldn't consider it. We can expect this to be a red-green Hero's Downfall with how often Gruul will outsize the competition. A two-mana kill spell? That's already really good.

Now what about Threat? While it may not come up often, being able to create a 4/4 token in a pinch is an ability that I'll be thankful to have. This is one of the reasons that I love split cards. Having an effect that is usually on the cusp of being included in a deck (Thrash) attached to a situationally useful ability (Threat) makes a great card.

I'll take a page out of LSV's set reviews and end this article off with my personal Top 3 Gruul cards from the set. While I think there are a lot of good cards, I think these stand above the rest.

Gruul is very much out of my wheelhouse, so I'd love to hear your opinions where I am under- or over-valuing cards. Are you particularly excited to try out cards in your existing deck? Do any of these inspire you to build a deck to include them? Let us know!