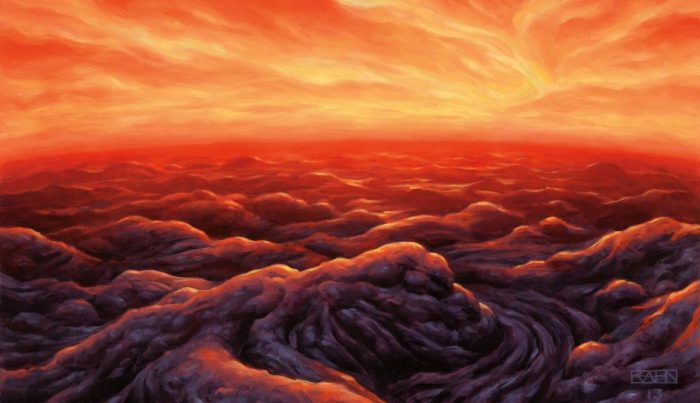 Welcome back to another installment of Reconstruct History, where we look at popularity in cards and archetypes here at EDHREC over time.

This week, to belatedly celebrate our reveal of the updated Salt Scores, I thought there would be no better way to rub salt in the wounds than to analyze one of the most divisive strategies out there: mass land destruction, commonly abbreviated as MLD.

For those who may be unfamiliar, the Salt Score corresponds to a 0-4 scale, with 0 being absolutely bland (not salty) and 4 being one of Chipotle's miscalibrated tortilla chip batches (super salty). Here at EDHREC, we poll the community once a year to get a sense of what cards the community finds frustrating to play against and are therefore high in salinity.

The results are in, with over 3 million votes! Out of the newly-voted Top 100 Saltiest Cards in the format, MLD, or some variant thereof (e.g., Sunder), make the list a total of 24 times, meaning nearly a quarter of the top saltiest cards are MLD effects. Our own EDHRECast has done a great job contextualizing this data and digging into why effects like MLD or general resource-denial effects consistently garner hefty heaps of the Himalayan pink seasoning.

But how popular are these cards? Do the new influx of votes correspond with popularity trends we've seen here at EDHREC? Are people encountering more MLD? Heck, is MLD more 'acceptable' than it was some years ago? Less?

I'm not confident we can answer all of these questions satisfactorily. For one, there are likely big Rule 0 conversations that are had which socially permit, or prevent, the featuring of some of these cards. Additionally, MLD spells just aren't printed these days as much as they used to be. Just take a look at the subsample of MLD (and MLD-esque) cards in the Top 100 Saltiest Cards list, and you'll find most are printed much earlier on in Magic: the Gathering's history. 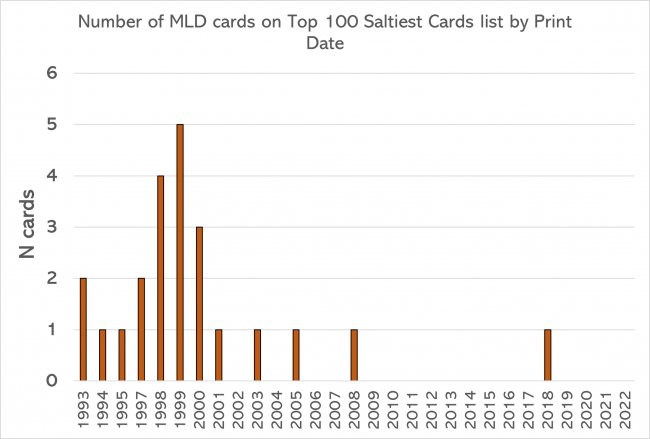 This is by no means representative of every MLD card, mind you; there are certainly cards like Boom // Bust (2007) or Wave of Vitriol (2014) that destroy multiple lands and were printed in dates not feature in the chart above. They just didn't happen to receive a high enough Salt Score to make the Top 100.

Despite these caveats, I think we can take a look at some of the major salt-inducing offenders and see how their popularity has trended over the last few years and perhaps get a sense on how the Commanderverse feels about these cards overall.

Let's start by outlining our criteria:

As is tradition, these criteria are somewhat arbitrary, and certainly won't cover everything. I can safely say I've been on the receiving end of an Elesh Norn, Grand Cenobite + Urborg, Tomb of Yawgmoth + Kormus Bell, or some other board wipe after a Nature's Revolt sticks. They're rather clever ways of facilitating the same result of an MLD spell.

I wanted to focus primarily on the cards that made the Top 100 Saltiest Cards list, as I think it would be a good gauge for Salt vs. Popularity. I've added in a few others as well as removed a few, like Acid Rain and Flashfires, since they simply don't have the sustained popularity. This leaves us with the following list of cards:

I know, I know, I probably missed your favorite one somewhere, but hopefully this is a good enough sample to see how those who are playing MLD would probably feel safe picking one of these.

The results for the MLD spells can be seen in the carousel below. Feel free to scroll to see each card individually. Just keep an eye on the Y-axis, as it changes depending on the card to better showcase some of the ups and downs in popularity over time. I've organized them alphabetically here.

We can then look at each card, side-by-side, with a fixed Y-axis to better facilitate comparisons between cards. I've color coded each card here to its color identity. 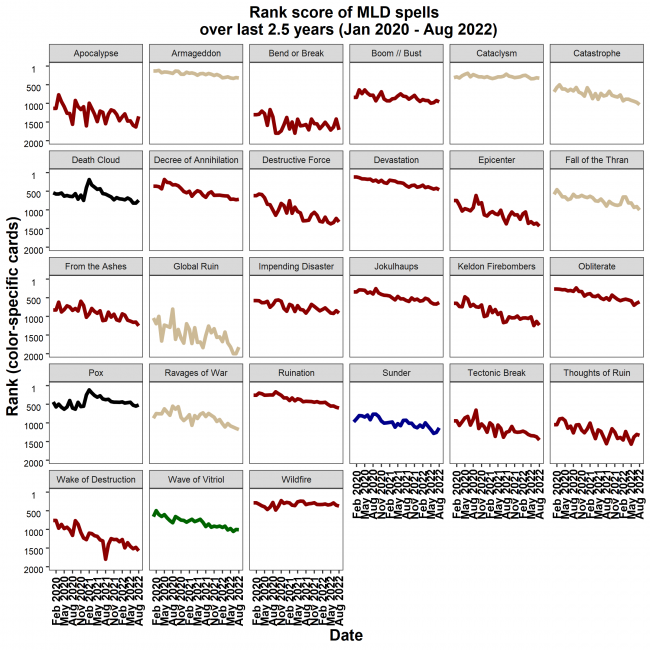 Most MLD spells seem to be on the slight decline. Does that mean MLD is less popular or even less 'accepted' now than it was some 32 months ago?

Not necessarily. For one, the sheer deluge of cards printed in the last few years is likely to force out a lot of older cards. For an older card to have 'staying power', it needs to compete with not only what was printed last year, but last week and tomorrow as well. As such, the majority of high-salt MLD cards might not be making the cut for most decks out there, but many still have sizeable inclusion rates (e.g., Wildfire).

While we only have two black cards of interest here, Death Cloud and Pox, consider their big spikes in popularity around the winter of 2021. My best guess is these two (among many other salt-inducing black cards) saw huge spikes in deck brewing and actual builds when Tergrid, God of Fright was spoiled (January 2021) and released (February 2021). 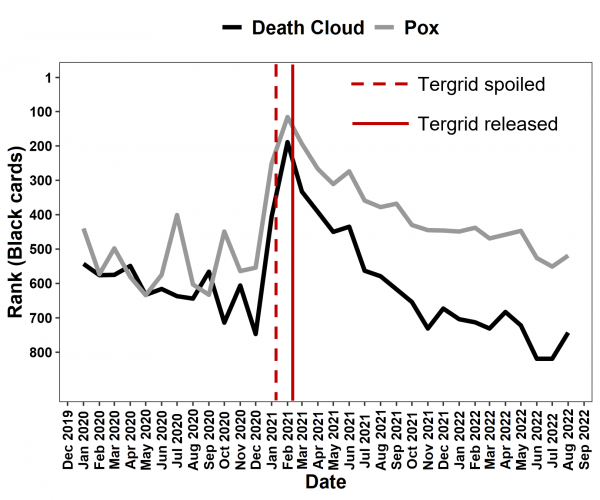 Notably though, the popularity didn't seem to stick for long, but it is interesting to see Pox has maintained a slightly higher popularity after the Tergrid spike.

Without further ado, let's take stock of what land we have left, and reflect!

The Social Price of MLD

Mass land destruction is the ultimate scorched earth option, and outside of specific scenarios where you can break parity (e.g., Avacyn, Angel of Hope), it often means mana winter for everyone. 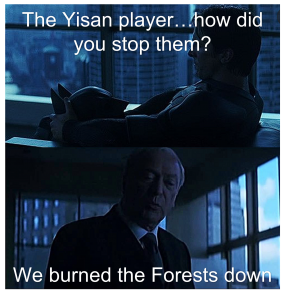 A relatively recent thread on the r/EDH subreddit inquired as to why Land Destruction gets so much hate, and a number of commenters chimed in that targeted land destruction is often more permissible than mass land destruction. Cards like Strip Mine, Field of Ruin, or even Pillage don't harbor nearly as much salt as their Armageddon brethren.

A more recent post by u/asabovesovirtual asked: "What would it take for land destruction to be accepted by the community?" Many posters responded that Balance-esque effects seems like they would be the best candidates, as they 'level' the playing field rather than just outright destroying it. But, as many also point out, Balance specifically is banned, so cards like Magus of the Balance or Land Equilibrium are some alternatives, though the latter is quite pricey.

I thought one last card that might be interesting to look at is none other than Dingus Egg. This goofy card doesn't typically get a high salt rating, and doesn't even destroy lands, but it does seem to be a great synergy piece for those looking to nuke land bases. I thought it might be an interesting card to look at to gauge all those decks out there that specifically want to see people's lands hitting the graveyard, especially since it's colorless and can theoretically slot into any MLD-focused deck. 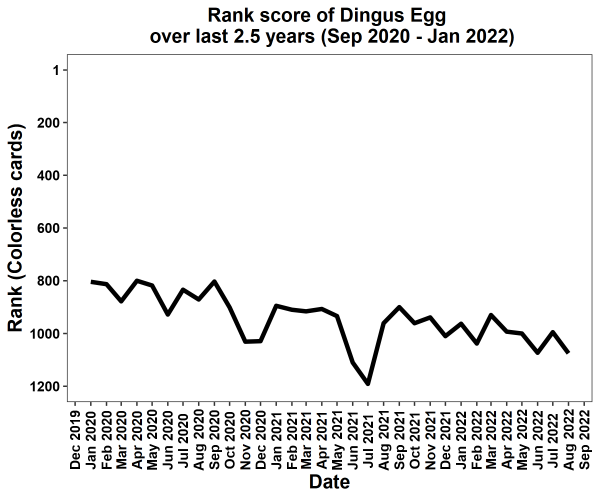 Welp, looks like the ole' Dingus Egg hasn't been faring too well in the last few years. Part of it could be its symmetrical nature. After all, if you're going to the lengths to put Dingus Egg in your 99 and running a lot of MLD spells to synergize with it, you're probably going to get semi-burned in the process unless you can somehow manage to give your lands indestructible. Perhaps Dingus Egg isn't a good a barometer at gauging MLD's popularity after all.

MLD and the Elusive Djinn's Wish

I want to be clear: I sympathize with what MLD can offer as a strategy. After all, it was the 1996 Pro Tour where we saw the raw power of MLD when sequenced properly, by first dropping a beater such as Erhnam Djinn followed by Armageddon.

The strategy was simple, yet brutally effective. The defending player would struggle to rebuild their mana while the 4/5 for four mana would put them on a five-turn clock. Ever since, people have attempted to capture the Erhnamgeddon strategy, but getting the perfect sequence is like capturing lightning in a bottle. This is where MLD can become so challenging.

Under the best case scenario, you can sequence an Armageddon with your own Avacyn, Angel of Hope out, or cast a Heroic Intervention while you still maintain priority. The results could be devastating: watch your opponents lose all their lands while you've broken parity and remain unscathed. At that juncture, when everything goes to plan, many may just scoop after it happens, not wanting to go through the motions of redeveloping a land base.

However, there are many, many instances where the MLD + protection spell just don't seem to line up so neatly. Maybe the proper sequence/combination of cards isn't there. Perhaps your Avacyn, Angel of Hope gets removed in the process.

Worse, maybe you did manage to land a big beater and land an Armageddon, wiping everyone's lands in the process, and you have a commanding creature to start eliminating players while they frantically rebuild... but then, the player after you drops a basic Plains as their only land, and taps it for one mana to Swords to Plowshares your sole beater. The game has effectively reset, and raises the question: now what? Some may just not want to play it out and decide to move to the next game.

These are both 'good' scenarios, where the MLD player isn't just firing off an Armageddon out of spite or just because. After all, they put it in their deck, why just sit on it, especially if they're behind?

A final note: MLD is often one of the proposed 'solutions' to decks like Landfall which vomit lands from any number of zones onto the battlefield. It's often touted as Boros' answer (given the sheer number of MLD cards in red and white, as seen above) to Simic/Jund/Sultai (or really, anything with green). However, there are many players, including myself, who tend to caution against this line of thinking. After all, Landfall decks are best suited to recover from MLD's effects before anyone else, as they often are constructed in such a way to get lands out of graveyards.

Again, I want to caution that I'm not against MLD or what it offers, I just think it takes careful consideration for what kind of meta, game, and experience the pod is trying to have. I also think these considerations are important in terms of thinking about the data we see here, and how it ebbs and flows each year.

What do you think? What's your perspective on MLD in the current Commander-scape? Any of the cards above you swear by? Any I missed? Let me know in the comments below!

Finally, if you haven't yet, I encourage anyone whose interested in playing MLD, or has played against it, to take a gander at Dana Roach's excellent article a while back, which dug into some of the pros and cons when it comes to MLD.