Welcome back to another installment of Reconstruct History, where we examine popularity of certain cards or archetypes over time, as measured by EDHREC data.

This week, we're looking at Orzhov removal spells, inspired by a classic: Vindicate. First gracing Magic way back in 2001 in Apocalypse it — wait. I just read that Apocalypse was the 23rd expansion set released in Magic: the Gathering. It took from 1993 to 2001 to hit 34 total sets before Apocalypse's release, whereas today (1/2022) it's taken only since Ixalan (2017) to have just as many sets. Wild.

Anyways, I digress. We're talking about Vindicate, a card whose original, iconic art showed the Weatherlight helmed by Gerrard, Weatherlight Hero rupturing Yawgmoth, Thran Physician's Null Moon, which had stored over 10,000 years (not now, Illidan) of white mana, causing it to rupture. Yawgmoth was injured, the Weatherlight lost its consciousness, and Urza's perfectly functioning and sentient decapitated head still helped out by providing its powerstone eyeballs for the Legacy Weapon. 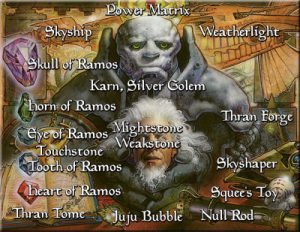 Remember? Back when Magic canon was more like sci-fi featuring intergalactic warfare than fantasy? But hey, there's neon lights just around the corner, and rumors of art deco Demons just a few blocks down.

Aside from the art and canon, Vindicate is a true classic, setting the stage for black and white removal that would later become so synonymous with Orzhov colors and is identity. Despite its iconicity, I wanted to see just how it'd fare in days of late, as evaluations over sorcery- vs. instant-speed have become so much more prevalent in our format, and what better way to do that than analyze it alongside other Orzhov removal spells that have followed suit?

Let's start by outlining some criteria:

As is tradition, we’ll be focusing on rank rather than the number of decks (i.e., decklists), as it helps account for fluctuations in decklists scraped in any given timeframe and helps us compare it to other colorless cards. Remember that the lower the rank (closer to 1), the more popular a card is!

This leaves us with the following small list of cards:

Obviously, there're a lot more options for removal out there, particularly in mono colors, but I wanted to keep it to this suite of cards so they can be better compared with one another.

In other words, if you're in an Orzhov deck and you want a spell that can remove multiple permanent types, which of these might you reach for? Vindicate is the classic, but does the fact it's a sorcery make it less attractive in today's landscape? How often are the problems mono-colored to warrant Vanishing Verse, or greater than four mana to warrant Despark? Let's take a look and find out!

Let’s start with the individual graphs. Feel free to scroll through the carousel to see each of the cards (organized alphabetically). As a quick note: keep an eye on the Y-axis. They change in each graph in order to show the complete range. I’ll make sure to co-plot them down below so you can better see how they compare to one another.

If you've been following this series, you'll notice something rather stark about these graphs compared to previous installments. Since we're looking at only Orzhov cards, the total pool of options is much smaller than mono-colors, lands, or colorless artifacts. As such, the Y-axis, rank, is actually going to be much smaller than what's typically seen in mono-colors, and the trend lines are pretty flat in many cases. But if anything, that's just all the more informative about what Orzhov-centric decks prioritize! It says something that 8 of the top 10 strictly Orzhov cards are removal spells.

Plus, just look at some of those! The Anguished Unmaking graph looks like a disturbing electrocardiogram reading when someone has flatlined, and it doesn't look to be going anywhere soon.

Damn and Despark have secured themselves in close running, while Mortify and Dire Tactics seem to be trending a bit downwards. Utter End and Vindicate have experienced some turbulence, but each seems to be holding fairly steady recently. I'm certainly curious where recent options like Damn and Vanishing Verse will end up in a few years' time.

With the graphs out of the way, it's time to reflect!

Some cards are likely to experience some fluctuations with rotation (principally, Vanishing Verse), but for now, it's pretty comforting that most of these options reign in so low. I think it's safe to say that Orzhov removal is so popular likely in part due to its affordability. Sure, you may not want to fork over close to $10 for the catch-all, instant-speed champion that is Anguished Unmaking, but if you're wiling to pay one more mana (and not lose three life!), Utter End is right there. If you constantly face big threats, Despark has got you covered for roughly the same cost. If you're in an aristocrats deck, why not give Rite of Oblivion a try? With the Flashback, you can get a total of four death triggers in Teysa Karlov while also exiling two permanents, which doesn't seem half bad, especially in a budget brew!

A lot of the appeal of Orzhov removal comes from its reach — many of these spells can hit at least one permanent type (Damn, Dire Tactics), but most can hit multiple permanent types (Despark, Fracture, Mortify, Vanishing Verse), and some can hit any permanent, no questions asked (Anguished Unmaking, Utter End, Rite of Oblivion, Vindicate).

Outside of what you are willing to pay ($-wise), the evaluation of these cards likely comes down to:

So let's co-plot all of these together and see what we see. The first shows all cards analyzed, and the second plot is restricted to cards within the top 30.

This is hard to predict from game to game, because there's just so much variance, and that's why I think it's not surprising that catch-all options ("any permanent"), particularly at instant speed, are so popular. I think it's safe to say that instant speed is generally valued higher than sorcery speed, and we see that in the data, but I do think that can vary depending on the card's reach and mana. Something like Firja, Judge of Valor would likely prefer instant speed, so there's a potential to proc her trigger on an opponent's turn, but for a deck constantly staring down City of Solitude or Price of Glory (a personal favorite, I must say), instants don't pull their intended weight.

I think it's also generally the case that people prioritize lower-mana cards over higher ones, when push comes to shove. Anguished Unmaking ranks as the most popular Orzhov removal spell, while Utter End is the fourth-most popular. People seem to be content on losing three life (it is a 40-life format, after all!) and spending on average ~$7.50 more if it shaves off one mana value, yet Utter End can really shine in something like Killian, Ink Duelist as it effectively reduces it to Dire Tactics.

While each of these are undoubtedly niche scenarios, I think it's niche contexts, builds, and metas are where some of the joy of Commander is to be had. For me at least, it's in the tremendous sea of variance that I derive enjoyment from this format, so I'm not just seeing the same cards each and every time.

The real question, though, is this: why not run both? Or more than one?

If you're in an Orzhov deck, or even Abzan or Esper, all of these options are likely worthy considerations. Including multiple offers added redundancy and more coverage in what you're capable of removing. The main issue is just that mono-color options (Path to Exile and friends) start to enter that competition too, making the card slots competitive. All in all, though, I think Orzhov is in a great spot for spot removal and for fostering interactive games.

What do you think? Are you surprised to see any cards plotting where they are? Are there ones you find under- (or over-) rated? Which ones?