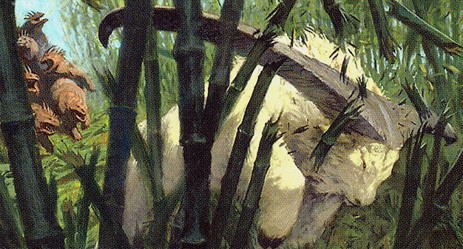 Well, shoot. Looks like Gus forgot to lock up the pasture gate, and Ol' Billy has gotten out once again. Go get your cousin, Earl. He's got a real talent for wrangling escaped wizard cows. Oh, and don't worry about hiring that tracker Jurruk again. He said it himself: his skills are wasted in the wake of destruction Ol' Billy causes.

Welcome to another installment of Reconstruct History, where we examine popularity trends of cards and archetypes over time. This time, we're taking a look at everyone's favorite mono-green finisher!

Shoot, that's not right. What I meant to say was ..

Wait, that's not right either.

Actually, let's just wait until the end to assign a number to it. We're looking at Pathbreaker Ibex, which has long been colloquially touted as the 'baby' Craterhoof Behemoth for its ability to provide a massive boost to your entire team and help you stampede over your opponents to victory. While 'baby Craterhoof Behemoth' is a cute description, I don't think it entirely does the Goat justice - but I'll unpack that a little later, after we've seen some of the data.

You'll notice I'm sticking to creatures only here. I think Triumph of the Hordes, Finale of Devastation, and heck, even Overrun are fantastic options worth considering further. However, if you'll permit me, I'll analyze those in a separate article so we can give them their due diligence. For now, I want to see how Pathbreaker Ibex shapes up against its other hooved and non-cloven competitors: Avenger of Zendikar, Craterhoof Behemoth, End-Raze Forerunners, God-Eternal Rhonas, Great Oak Guardian, Kamahl, Heart of Krosa, and Thunderfoot Baloth.


I know none of these creatures are replacements for one another, as they each have their subtle differences, advantages, and disadvantages. I do, however, think they're all viable options in the mono-green creature finisher suite, and I therefore think they are worth consideration against one another.

There are some other great options out there too, but they just didn't hit that 400 threshold for us to plot here, so if you want some more hipster and/or budget alternatives, check out Decimator of the Provinces, Earthshaker Giant, Blossoming Bogbeast, or Cultivator of Blades.

As is tradition, we’re focusing on rank rather than the number of decks (i.e., decklists), as this helps account for fluctuations in decklists scraped in any given timeframe, which helps us compare the results to other cards. Remember that the lower the rank (closer to 1), the more popular a card is!

The individual plots for each card can be seen below, organized alphabetically. Feel free to scroll through the carousel or visit the imgur page to see each of the individual graphs. As is tradition, keep a close eye on vertical (y) axis changes, as keeping a fixed axis for these plots often smooths out some interesting variation over time. In the next plot, I'll keep a fixed axis for all of them so you can better compare one card to another.

Finally, here's a conjoined plot of all of the green finisher creatures so that you can more easily compare.

Well, hot dang. It looks to be that Ol' Billy ain't the Grand Champion beefcake he used to be. He ranked in the top 200 not too many years ago, but has been sporadically trending downwards ever since. In fact, it seems most people have continued to prioritize vegetarian options, like Avenger of Zendikar and its salad-bar-in-a-can potential.

Pathbreaker Ibex's trend over the last two years has been really sporadic, in fact. For illustrative purposes, I've scaled the Y axis to not go all the way to Rank 1 just so you can see how much up and down it's experienced: 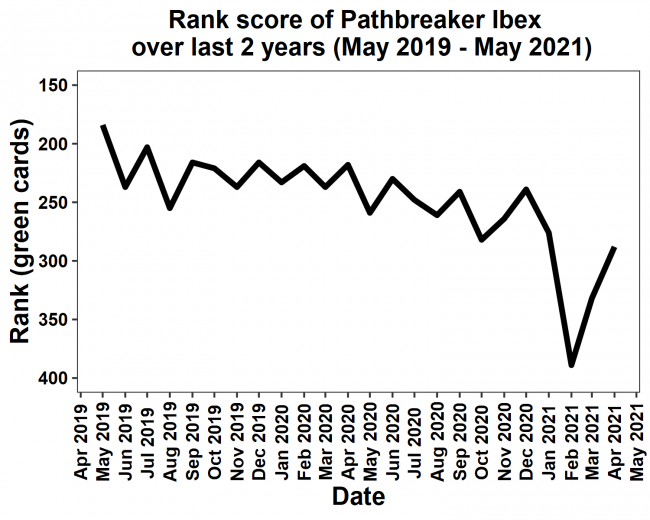 Pathbreaker Ibex has experienced a cumulative change (i.e., up and down) of 744 ranks. Compare that to the cumulative rank change in:

While obviously not a perfect measure, I do think it is informative of Pathbreaker Ibex's volatility. Three Visits, a card we examined in the Green Ramp spells article, finally got a reprint for the first time in decades, at which point it saw a massive jump in rank from 359 to 149 to 14 within the span of two months. That's a cumulative change of 577 ranks, and that's still less than Ol' Billy.

Alright, we managed to Wrangle both the Goat and some data. Now, it's Time to Reflect!

Not long ago, Pathbreaker Ibex wouldn't fetch you the pretty penny it does today. Sure, there were only two 'goat breeders' (a.k.a. sets) you could get it from (Commander 2015 Plunder the Graves deck and the Commander Anthology reprint of the Plunder the Graves deck), but it sat below $5 for nearly four years. It broke $10 around July 2020, $20 around August 2021, and as of now (Nov. 2021) it's closing in on $30. Like a fine goat cheese (e.g., chèvre), this Goat's worth has gone up tremendously in the last few years. We just saw literally at the time of writing (11/18) that the new Crocodile Jackson's Monstrous Menagerie Secret Lair will feature a Pathbreaker Ibex reprint, in its first legally sanctioned alternate art, so its price may well dip for a stint in the near future. 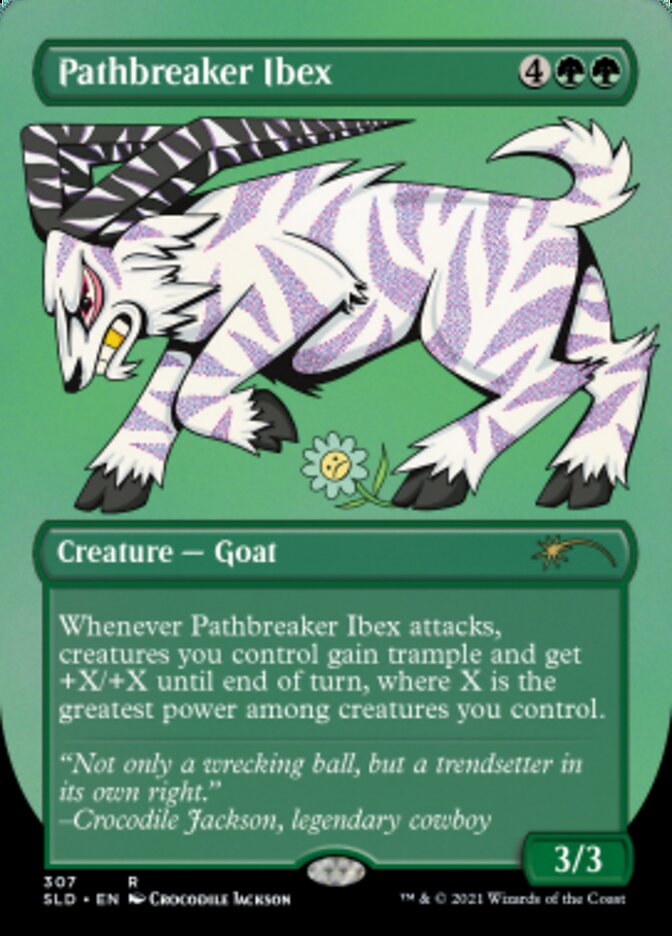 While Craterhoof Behemoth may still be worth quite a bit more, it did see a limited reprint in Jumpstart (July 2020), temporarily bringing its price down. But let's be honest, Craterhoof Behemoth is a canonical finisher that people are willing to pay for. We saw its popularity trends above, and that popularity, despite its price, is a testament to its efficacy.

Avenger of Zendikar continues to see reprints, with three since Double Masters dropped (July 2020). End-Raze Forerunners have also flatlined around $1, making them a fantastic budget consideration for go-wide finishers. Plus, that vigilance is no joke to avoid any crack-back.

Great Oak Guardian is still a worthy budget consideration, and I for one am curious to see where Kamahl, Heart of Krosa ends up in due time, both at the helm of decks and even in the 99. For now, there's just not a lot of data to tell.

Totes McGoats for the Goat

Nowadays, I don't think it's a fair comparison to size up Pathbreaker Ibex against a Craterhoof Behemoth. First of all, Craterhoof Behemoth is a hard act to follow, immediately slamming down and growing your board by, well, however big your board is. It comes 'out of nowhere' and acts as a spell, but on a creature body, which green has ample tutors for. Unless it gets power-crept, just about any card will pale in comparison. If anything, I'd liken End-Raze Forerunners to a 'baby Craterhoof' nowadays.

Pathbreaker Ibex may grant your board a massive boost and trample, but the fact that it's tied to an attack trigger separates it enough for me to highlight its potential over Craterhoof Behemoth in many lists. In my eyes, Pathbreaker Ibex really shines in decks that include red. While it may be green, it's a distant cousin of the Mountain Goat and has great synergies with red's potential for granting haste and extra combat steps.

Xenagos, God of Revels, Maelstrom Wanderer, and Wulfgar of Icewind Dale are some popular options we see in the command zone that love to play Pathbreaker Ibex, and probably like it even more than Craterhoof Behemoth or some of those other options. Both Xenagos, God of Revels and Maelstrom Wanderer can grant haste out of the command zone, allowing you to take full effect of the Ibex's potential without having to wait a full turn for it to get removed. Wulfgar of Icewind Dale may not grant haste, but having access to red and the potential double the Pathbreaker Ibex triggers means you give your board 2X power, where X is the greatest power among your creatures.

Now combine red's potential for granting haste with its affinity for extra combats, like Moraug, Fury of Akoum or Aggravated Assault, you can attack again and again and again!

While I'm a big fan of Pathbreaker Ibex in red decks, haste seems to be expanding into other colors. Recently, we received a new Mechanical Color Pie (2021) update, which stated that green is now "secondary" in haste effects, where it had previously been "tertiary." We see the accompanying explanation here:

Haste shows up most often on red creatures. We've moved green into second place for haste. Black is still technically secondary but gets haste less often than green.

We just kept making more and more haste creatures in green, so we decided to change green to secondary to reflect what we're doing. Us moving it up in green moved it down a bit in black, but not enough to knock it down to tertiary.

So with that change, I (and others) may well alter our evaluation of Pathbreaker Ibex in due time. We've already seen the recent Ulvenwald Oddity introduce more mass haste to mono-green, and I wouldn't be surprised if we see more similar designs in the future.
The ability to give haste to Ol' Billy is a game-changer, and being able to do so without needing to splash red may well make it more potent. Molimo, Maro-Sorcerer (42% of 118 decks) and Grothama, All-Devouring (35% of 441 decks) were already running Pathbreaker Ibex, and giving them access to more mass haste effects may really put them over the top.

I had fully envisioned Pathbreaker Ibex to end up right behind Craterhoof Behemoth's popularity, but was shocked to see some other options, like End-Raze Forerunners, take precedence. I think budget and availability are really at play here, similar to when we looked at Insurrection, which also hasn't seen a lot of reprints and clocks in around $20. It may be the case that if people are going to fork over money for a big mono-green finisher, they might just go the extra distance and get a Craterhoof Behemoth instead, especially if they can repeatedly abuse the ETB trigger.

So what's your take? Are you shocked to see the data on some of green's canonical finishers, budget or otherwise? I'm not surprised to see Avenger of Zendikar and Craterhoof Behemoth at the top, but I'm curious where other cards like End-Raze Forerunners or Kamahl, Heart of Krosa may fall in years' time. The field may be a bit crowded for creature-based budget finishers when you have such all-stars like Craterhoof Behemoth in the field already, but I for one am always open to seeing other options.

Oh, and what's your favorite deck to play Pathbreaker Ibex? My personal favorite place for Ibex, along with Thunderfoot Baloth and Blossoming Bogbeast, is my Deceiver of Form deck, which seeks to manipulate one of those creatures onto the top of the library, thus transforming a board of non-threatening mana dorks and utility creatures into a massive blowout.

I'm also curious: do you think green getting more haste effects may change the evaluation of Pathbreaker Ibex over its competitors?