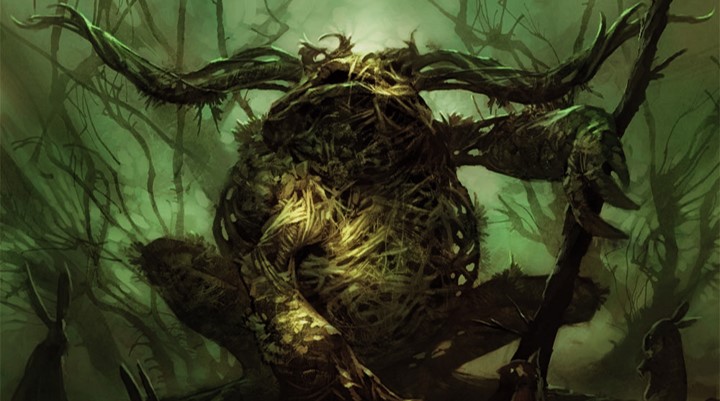 Welcome back to another installment of Reconstruct History, where we look at popularity trends over time for cards and archetypes here at EDHREC!

This week, we'll navigate through the dense foliage to find that small clearing where all manner of forest-critters dwell, almost like a scene out of a Brian Jacques Redwall novel. You know, the kind of mystical clearing where brambles conjoin to make a super-sized horned frog, and all manner of characters, from Rakkety Tam to Mariel of Redwall to Basil Stag Hare, all drop their very descriptive morsels to pay homage to the steward of the forest. 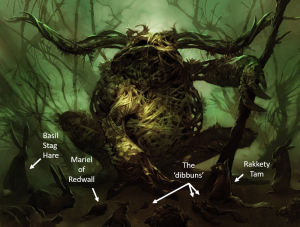 Y'all remember this card? I'll be honest, I pretty much forgot about it. While 'staple' is a term I prefer to use sparingly, I will say this card did appear in a lot of the green decks of yore. It felt like such a bomb, either when you dropped it or when you saw an opponent resolve it. It's like a 'reload' button on legs. Just when you thought you were out of resources — bam! Your grip is now full and you're off developing an even more clogged board state.

However, that was when green's draw options were more limited. Harmonize was good then, and is still fine now, but in the last few years we've gotten Garruk's Uprising, The Great Henge, Beast Whisperer, and Guardian Project, just to name a few. Let's see just how well Regal Force has been doing since these bombs have dropped.

Let’s start by outlining some criteria:

This brings about a pretty specific pool of cards, but that's because I'm not entirely sold on looking at every green card that just draws cards. There'll be no Harmonizes or Glademuses here, as good as they might be.

Rather, we're focusing on cards that draw cards in relation to creatures, either by the number of creatures already under your control, the biggest power among creatures you control, or your resolving of more creatures.

Here's a carousel of the plots analyzed here. Feel free to scroll through to see the different cards plotted — they're organized alphabetically.

As a big note of caution: keep an eye on the change in Y-axis. This is to help show the shape of the trend lines a bit better here, but we'll plot them next to each other below so you can better compare and contrast them in one plot.

Here's the grid plot so you can better visualize each card side by side. I've kept our card of interest here, Regal Force, in red to stand out. 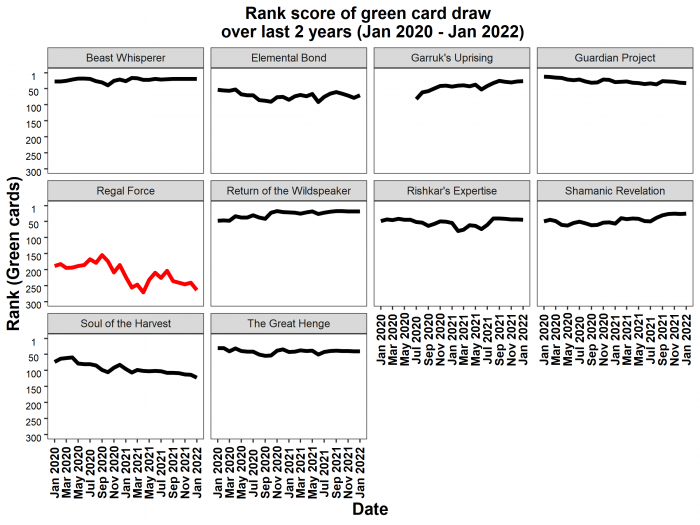 I think it's pretty noticeable just how much Regal Force has trended downward when compared to some of the other options here. Not only is it the sole card here that experiences a rank lower than 150, it also never even surpassed that rank in the last two years.

Soul of the Harvest similarly seems to be trending downwards, but not nearly as severely as Regal Force. The rest of the cards all huddle above the 100 rank mark, with most actually sitting around the top 50.

Without further ado, it's Time to Reflect on our findings.

Take a look at that price graph for Regal Force. It was a $10 card from nearly 2013-2017, but tanked after a reprint in 2016 in Eternal Masters, where it experienced a sudden decline. Notably, after a few reprints, it's never managed to climb back up past even $5. I think it's safe to say that while the reprint helped Regal Force's price go lower initially, power creep and other alternatives have kept it there, preventing it from rising back to its former price demand. Regal as it might be, it seems people just aren't that into monarchies anymore.

Undoubtedly, some of the other options here are astronomical (e.g., The Great Henge) while others are more easily accessible (e.g., Elemental Bond, Shamanic Revelation).

Regal Force specifies that it will only draw you cards for each green creature you control, so unless you're in mono-green, or a deck that generates predominately green tokens (Elves, Scute Swarms, etc.), that card draw can actually be pretty restrictive.

I'm also going to go out on a limb here and speculate that, generally speaking, the mana value of Regal Force isn't all that attractive by today's standards either. While The Great Henge may technically have a greater mana value, it will seldom cost you nine mana. If The Great Henge indeed is reduced by more than two mana, that puts Regal Force at the top of the mana curve amongst all the cards analyzed here.

Similarly, Return of the Wildspeaker has extra benefits for its mana cost, since it has the added flexibility of a pseudo-Overrun effect. Rishkar's Expertise may cost six, but refunding a five-mana spell for free means you're still saving on the cost.

Soul of the Harvest may be the closest comparison to Regal Force here, both being creatures and both being on the upper end of the mana value spectrum. Even aside from Soul of the Harvest also being a bit more 'on rate' than Regal Force (a 6/6 trampler for six mana vs. a 5/5 for seven mana), Soul of the Harvest isn't dependent on an already-developed board. Regal Force can be an amazing 'reload' if your board is already humming, but is a reload really what you need when you've already clogged the board? Wouldn't you sometimes just rather just drop an Overwhelming Stampede or a Beastmaster Ascension variant instead? Soul of the Harvest is a close comparison because they're both big creatures, but the dynamic is entirely different, and I find that it can often help you draw cards both when you're already ahead and when you need to reload your empty board.

A Force to be Reckoned With?

I can certainly see the appeal of Regal Force in a deck like Rhys the Redeemed, who comes out early and starts generating green tokens. Such decks don't benefit from the slough of other options we've gotten recently (Guardian Project, The Great Henge, etc.) and can curve into Regal Force as needed to reload their hand. It certainly has homes, just maybe not as many as it once did. It used to be ubiquitous in creature-centric green decks, but the landscape of green and its potential for card advantage has drastically changed in the last few years.

What do you think? Do you still love to get a swell of cards all at once with Regal Force, or have you explored options elsewhere? Let me know in the comments down below. I'll be hanging with the other forest critters, munching on...