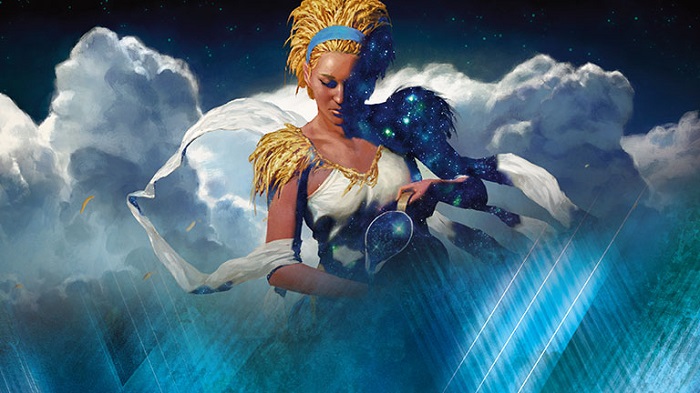 Hello again, lovely readers! It is I, Seth Cross, and we are back with yet another installment of Replacement Commanders! This series is dedicated to all the unloved legendary creatures that get printed in the annual Commander product decks but are not the face cards of the decks themselves. While everyone else goes gaga over Edgar Markov, Lord Windgrace, and all the others, we build decks around the Brudiclad, Telchor Engineers and Kess, Dissident Mages, dreaming about what could have been if Wizards of the Coast had focused the precon decks more on these other unique commanders. The past poll that I ran on my Twitter account and the Praetor Magic Discord server decided not only this article's star, but the next one as well. The final article will feature the exciting new Esper (white, blue and black) Zombie commander, Varina, Lich Queen, but this week, we are talking about… This is just my opinion, but I have increasingly felt that enchantment decks are becoming much stronger and more prolific as new sets are released. Not just Commander sets; I've seen an influx in decks built around the strategy, and from all different color combinations. Granted, white and green seem to be at the core of some of the more tuned or smoother-running decks, but in the end, you can probably find decks that revolve around enchantments in almost any color combination at this point. Overall, though, Bant is my favorite combination of colors to work with, and Kestia creates a space for an interesting niche.

Most of the enchantment decks I've seen will either pillowfort up and win in a single play (such as turning everything into a creature with Starfield of Nyx or staying untouchable long enough to use Approach of the Second Sun) or they will pile Auras onto a single creature (why hello there, Bruna, Light of Alabaster) for a few big shots to knock opponents out. While Kestia does not blatantly dissuade those kinds of strategies, she does open up another: playing enchantment creatures or other Bestow cards, and using aggression to maintain a strong sense of card advantage.

Alright, fine, 'EnBantress' is not really a term, unless you want to sound silly. Still, the term was meant to refer to the Bant Enchantress decks, which is basically what this entire precon is about. Some of you may be asking, “What does 'Enchantress' even mean?” I am more than happy to explain. The term refers to the first few cards that rewarded the user for casting an enchantment card by allowing the caster to draw a card. The very first one printed was all the way back in Limited Edition Alpha, Verduran Enchantress, and has expanded into an entire suite of similar effects.

I've mentioned recently in the series that I try to make these lists budget-friendly to give a more “precon” feel, so I chose to leave Argothian Enchantress off the list. Its current lowest price is $13.40 according to Scryfall, and besides, the Shroud doesn't help a deck that wants to Bestow creatures onto creatures. The rest, including the newer Satyr Enchanter, are all going in the list, giving us a ton of card draw in the deck.

Bestow is an alternative cost, and pretty much always a higher than the card's regular converted mana cost. For this reason, I like Danitha Capashen, Paragon and even Hero of Iroas to reduce the cost of our Auras. With both on the field, Kestia's Bestow cost is the same as her CMC, which is great! For the same reason, I also want to suggest an odd card for the deck, at least according to Kestia's EDHREC page, in the form of Grand Arbiter Augustin IV, or GAAIV for short. He reduces Kestia's Bestow to the same cost as her CMC but disrupts our opponents and discounts all the rest of our white and/or blue spells, Auras or otherwise. Aura of Silence is another great disruption card that can also serve as versatile removal. Another great disruption card is Stasis, because it stops -

Okay, okay. I am sure you figured it out. “Is this guy building a Stax deck?” He is, dear reader, he is.

Stax decks, if you do not know, are designed to prevent other players from being able to play the game while the pilot finds ways to skirt around their negative side effects. For instance, one way we get around Stasis's drawbacks is with Bear Umbra, which untaps our lands whenever we attack. All we need to do is make sure we slap that Umbra on a vigilant creature, and that's easy to do with a Heliod, God of the Sun in the 99. Plus, because of Kestia, attacking with enchanted creatures is a double upside, because we'll also draw cards! We can make our opponents squeal with joy (see: despair) by pairing Stasis with Kismet, Blind Obedience or Authority of the Consuls, which basically becomes a cantrip if we have a single enchantress effect out.

Protect and Serve… Ourselves!

If you've never played against a Stax player, piloting a deck like this may be a strange experience for you. You may not be prepared for the hate and ganging-up you will inspire. Rest assured, everyone will try to knock down your beautiful locks and walls. We need to protect these pieces, so cards like Greater Auramancy and Sterling Grove are great. They're also two of the main bank-breaking cards in the entire deck. After all, every precon should have some choice reprints to spice the lists up!

There's another protective card I'd like to include, one we got from a previous Commander product: Teferi's Protection. We may need to keep ourselves safe from enchantment destruction effects like Austere Commander or the even more dangerous Merciless Eviction.

If our opponents manage to find a way past our Stax effects and obtain creatures capable of attacking, Propaganda, Ghostly Prison, and even (sigh) Sphere of Safety will make it nearly impossible for those attackers to aim at our life total. Since our walls will be up and our life total unchanged often, Luminarch Ascension can provide us with an army of Angel tokens while Heliod, God of the Sun will pump out Cleric enchantment creature tokens. Couple these army-making cards with Aura Shards and we'll force our opponents to weep at every noncreature, nonland permanent they try to play as it ends up in the graveyard. Of course, if your group has players like me that love putting things into and taking things out of the graveyard, a Rest in Peace would not be amiss in the list.

Speaking of the list, let's toss in some support cards in the form of ramp, removal, a few more non-Enchantress ways to draw cards, plus a little ol' Wrath or two, and we should get something that looks like this:

I'll be 100% honest with you; I went through about three different themes for this deck when I was planning it. My first thought was 'Enchantment Creatures Only,' like a Primal Surge and only creatures, but playing more off cards like Heliod, God of the Sun or Starfield of Nyx to have an army out of nowhere for a surprise ending. I then realized cards like Ajani's Chosen are not enchantment creatures, but would do great in a 'Surprise Army!' deck, and tweaked my design and came up with half a list I enjoyed a decent amount. Finally, I thought, “maybe just Bestow and Constellation tribal” in a Theros tribute deck. However, when I considered GAAIV for the first time, I realized I wanted to do something a little out of left field, and went with the Stax subtheme.

The reason I explain all of this detail is to highlight one of my favorite parts about deck building and brewing in Commander, and that is the shaping of a deck. For example, on my Monday live podcast on Twitch I recently discussed that my Krenko, Mob Boss deck started out as a typical “make tons of Goblins to make tons of tokens” deck, and evolved into the combo fiesta that it is now. That shaping and changing and tweaking and perfecting process is my favorite part of brewing a deck, and one of the reasons I love writing these articles so much. Each time, I start with a blank slate (and typically a crisis of “What do I even do with this?!”) but by the end of the deck and the article, I am in love with everything. Brewing, molding, and watching a deck take shape is one of the best parts of writing and EDH in general.

The next article will be the last one for Replacement Commanders, and while I cannot wait to talk about Varina, I am going to miss the Commander 2018 set. After that, we'll focus again on my other series, Uncommonders, possibly highlighting Ultimate Masters and its most recent additions to the uncommon legendary creature roster (I'm looking at you, Shirei, Shizo's Caretaker)! So, here's to looking forward! Forward to next year and the Commander product that will, naturally, bring us more Replacement Commanders! Until then, make sure you're following me on Twitter, and if you want an awesome place to talk about our favorite game, consider joining the Praetor Magic Discord server!