Rise to the Challenge - The Best Sets for Commander 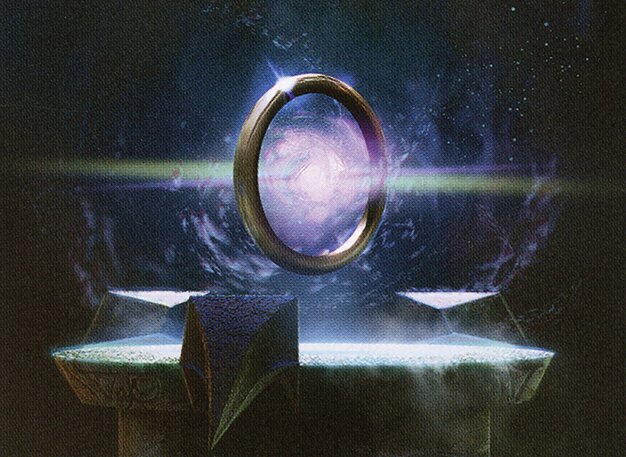 I wish I had a clever preamble for my first contribution to EDHREC, but I'd rather just get right to it! I was curious about which single Magic expansion has contributed the most to the Commander format, so naturally, I turned to the data for answers.

The way I'll measure a given card's contribution to the Commander format is to count the number of decks in which it appears on EDHREC, which itself collects Commander-legal decks from other sites and houses them in a convenient location, taking advantage of their deck collection to present aggregate summaries of Commanders, themes, and specific cards to aid in deckbuilding.

So, by essentially any measure, Sol Ring is the single most essential Commander card, appearing in 80% of all decks tracked in the last two years on EDHREC. Other ubiquitous cards include Command Tower, Arcane Signet, Lightning Greaves, Swords to Plowshares, Cultivate, Counterspell... all familiar names, and each a staple of the format.

However, in terms of "contribution to the format", is Sol Ring (827,771 decks) three times (2.97 times) as important as Lightning Greaves (278,889 decks)? Probably not, but neither ought they be considered equal when it comes to counting cards in a set. There are several ways to find a happy medium here, and what I've chosen is to just weigh each card by the log (base 10) of its deck count. This has the effect of shrinking the differences between cards in the same tier of popularity while maintaining a distinction between the most and least popular inclusions. Here, for example, are the number of decks, and the base-10 logarithmic equivalent number of decks (hereafter referred to as "logged decks" or "logged number of decks"), in which the 9 Snake Shamans appear:

Anyway, you get the idea. I'll assert that, by taking the sum of these logged values, for each Magic expansion, I can come up with a reasonable measure of how much each set has contributed to the Commander format. (And if you have a better way of doing this, tell me!)

If you buy this premise, here are the top ten sets, sorted by this "contribution to EDH" metric, counting only cards that had their first printing in the set:

ndecks is the number of EDHREC decks in which cards first printed in each set appear; sum_log is the sum of the logged number of decks in which those cards appear, as described above. As you can see, Throne of Eldraine dominates this list in terms of the simple ndecks count (outdone only by Alpha, at 2,816,151), but ELD is somewhat top-heavy, featuring Arcane Signet and Fabled Passage. 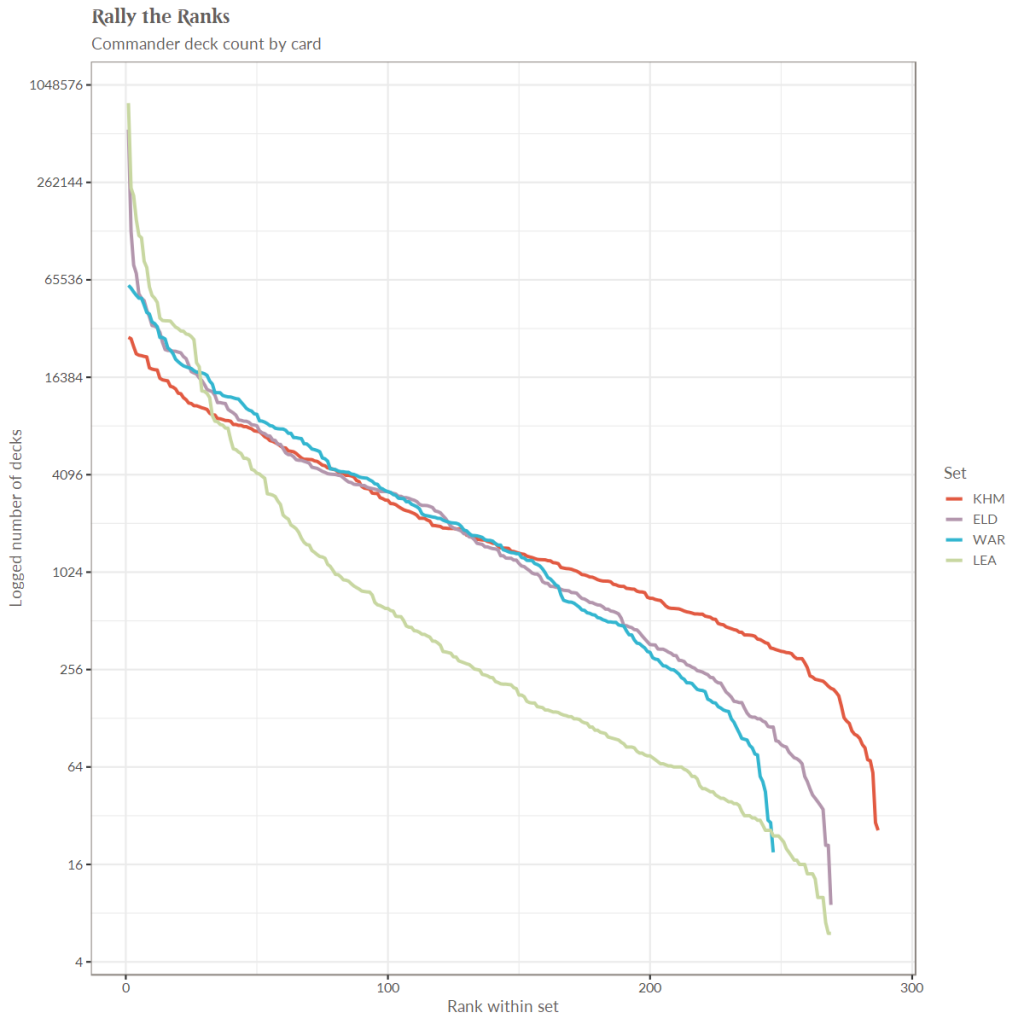 Alpha and Throne of Eldraine's most-played cards are more ubiquitous by far, but both sets tail off faster than Kaldheim, which just has more cards that see a substantial amount of play. Note that I'm sure there is some recency bias in the construction of decks featured on EDHREC, which covers only the two most-recent years of published and/or updated decks. This graph would probably look different with a deeper historical pool of Commander data, but for now, I'll just claim that this analysis is focused on the current meta. 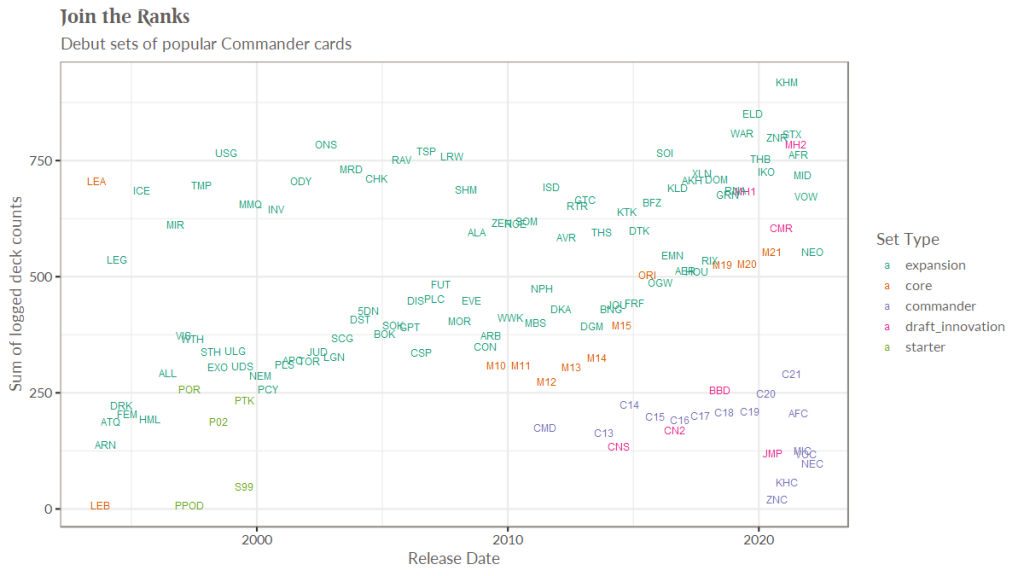 Bearing in mind that this plot includes only card debuts, not reprints, you can see Kaldheim and Throne of Eldraine as peak contributors to the contemporary Commander format. You can also see a slight slope upward over the last 15-or-so years, indicating that WotC is increasingly printing cards with Commander in mind and/or that there is a recency bias in the EDHREC data.

There is also an interesting artifact in this plot: it looks like there are two distinct green-tinted expansion set trends that rise and converge around 2020. This is just a function of the big-small-small block pattern, in which more cards were printed in the first expansion of a new block.

If we look at the average logged deck count, rather than the sum, by set, you can really see that the Commander-focused releases are doing their job. 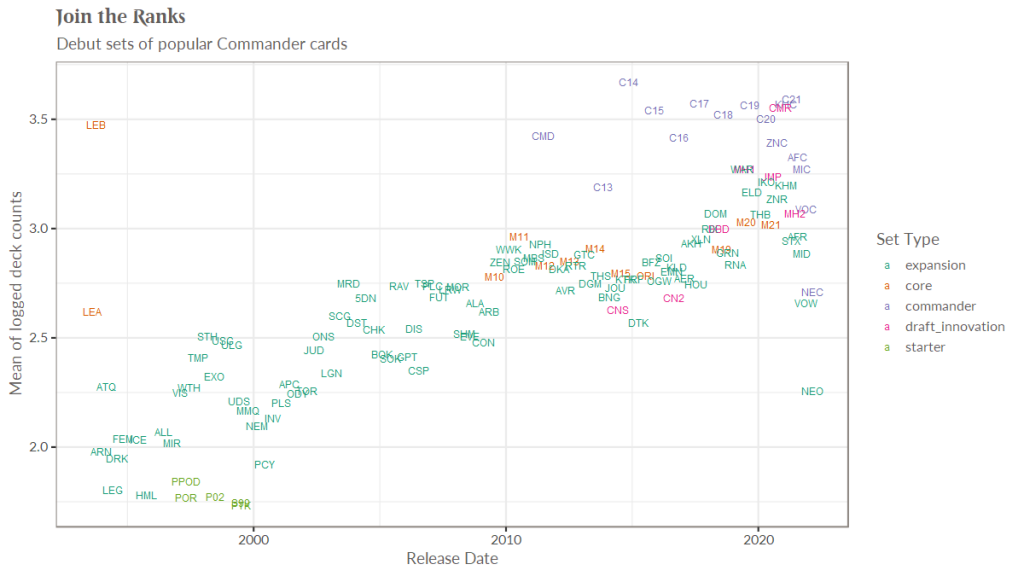 We can think of this as plotting the "hit rate" for each set, and as this plot shows, the typical card first released as part of a Commander-focused set is seen in an average of 30,027 EDHREC decks. Indeed, for every premiere expansion-Commander release pair, such as NEO-NEC, VOW-VOC, MID-MIC, AFR-AFC, STX-C21, KHM-KHC, and ZNR-ZNC, the "batting average" is higher in each case for the Commander-focused set - but this just confirms something we should have expected.

What about reprints? Which sets have been the best at adding popular Commander cards to the market? 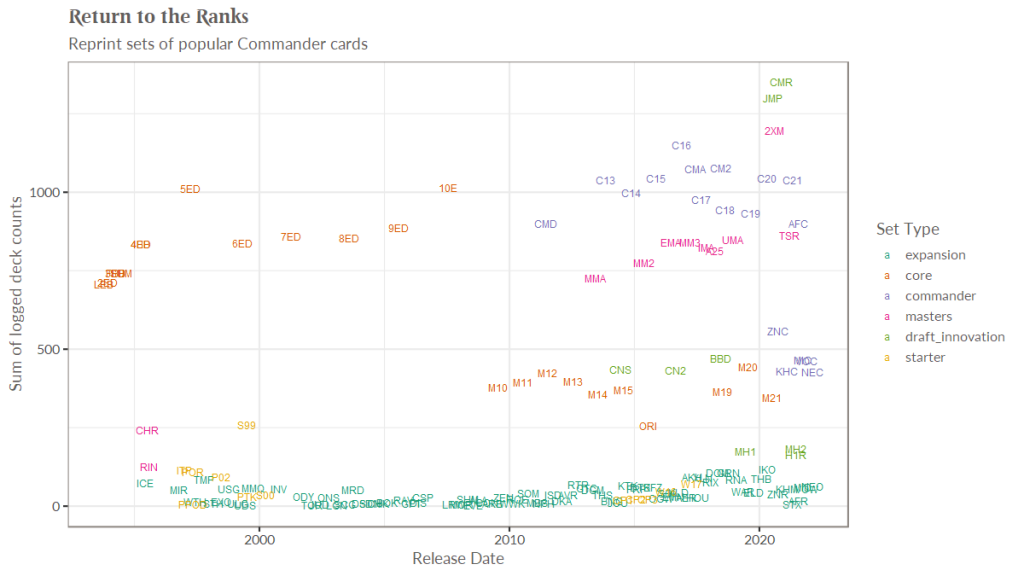 This again is the sum, not the average, but the Commander-focused sets stand out at the top, given that they're characterized by their inclusion of reprints chosen specifically to meet the needs of Commander players. The pre-M10 Core Sets, consisting entirely of reprints, rate unsurprisingly high by this metric, as do the more recent reprint-focused Masters sets.

It has long been believed that white is the weakest (mono-)color in Commander due to its color-pie-assigned weaknesses in ramp and card draw. WotC has been aware of this sentiment for some time and has been working on solutions that preserve the color pie, keep white "feeling white" in other constructed formats, but make (mono-)white more viable in a 100-card singleton, 40-life format. Not everyone has been happy with the solutions, but I've found some evidence that Wizards' plan is working.

Recall the above definition of "contribution to the format": the logged number of decks in which a card appears. For each newly printed set, we can think of each mono-colored subset as a whole by taking the sum of its contributions. For example, here are the mono-white cards from Ravnica Allegiance, sorted by EDHREC popularity. Then, we can take the proportion of those contributions by color attributable to each color as a measure of how much a specific Magic release "leans" toward one color. If that sounds either too mathy or too vague, here's the basic idea: how much more widely have [white/blue/black/red/green] cards from [set X] been adopted by Commander players relative to the other colors of the same set?

The answer, for most of Magic history, was that blue, green, and black got most of the good new stuff each set, while red and white languished behind. 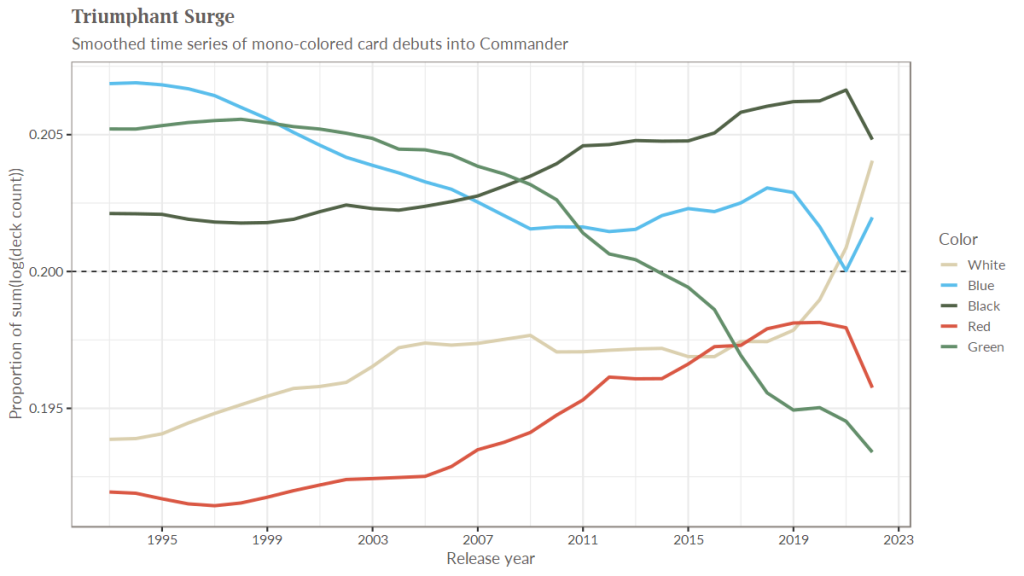 Red started as a clear last (or mono-red cards released in the early days of Magic are relatively underplayed in the current Commander meta), but it has been trending upward, while new green cards are decreasingly adopted (again, relative to the other four colors). This might be because new green cards have a higher threshold of quality they must surpass in order to oust the existing body of high-quality green cards.

There are lots of interesting things to see in this graph, but I'd like to call your attention to the sharp recent uptick in white's trendline. Starting with cards released in 2020, you can really see the evidence of WotC's focus on making Commander-oriented cards in white, as we see the proportion of white debut cards really spiking.

I don't think this pattern is sufficient to conclude that the new white cards WotC is printing are "good" or "good enough", but I do think this is sufficient evidence that Commander players are adding them to their decks, which has to indicate that they're useful in some way.

So, in May 2020, when Mark Rosewater said, "We're working on it," it certainly looks like he was telling the truth.

Let me hear them @MtG_DS. I’d love to know your ideas for other ways to evaluate contributions to Commander and whether this analysis resonates with your own experience. And if you haven’t already, please follow me on Twitter!