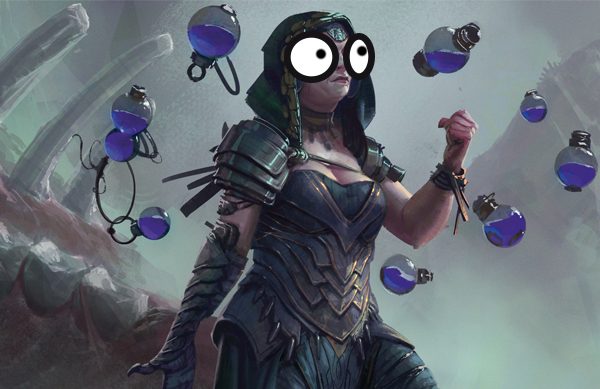 Greetings, fellow EDH addicts. Welcome to another iteration of Shape Anew, where we build a decklist around a commander with 500+ decks on EDHREC. Different strategies will be explored to find original approaches for these popular commanders. We’re not allowed to use more than fifteen nonland cards used in the commander’s average EDHREC decklist. On top of that, we will use fifteen nonland cards that are not featured on the main EDHREC page of that commander. So, what crazy shenanigans will happen this time?

The guilds are back! Flavorful, awesome, and always on-theme. Boros Soldiers, Izzet Spellslingers, Golgari Grave-Trolls; all called to action in their familiar forms. Established decks will all receive numerous new toys to tinker with! But we aren’t here to reshape the old, we’re here to destabilize it! To turn things on their head! It’s always fun to create unexpected strategies, especially during Ravnica season. So, what wouldn’t you be expecting?

Grixis tokens. Let Selesnya have their Rhys the Redeemed; we can do far better in the opposite color combination. When searching for new strategies for commanders or color combinations, it can be very inspirational to look at the things you’d expect last. In this case, that would be the comparison between Selesnya and Grixis. Maybe we can spawn an even greater army than our enemy colors ever could. “How?” I hear you cry. Well, I’m glad you asked. Enter, the champion of the tokens: Kess, Dissident Mage.

Kess is an effective token general because many Grixis tokens are produced with instants and sorceries like Hordeling Outburst. Our commander practically doubles these, for double their original price. She has some distinct advantages over cards like Rhys, by working more immediately and by being far more versatile. During testing, it honestly surprised me how many tokens can be generated this way.

There’re a lot of spells that create a token on top of another effect as well. For example, Summoner’s Bane counters spells and Release the Gremlins destroys artifacts. This is also how we can choose our mass removal, as beautifully demonstrated by cards like Subterranean Tremors and Crush of Tentacles.

In addition, further tokens are generated by enchantments like Goblinslide or Metallurgic Summonings, because not all instants and sorceries create sufficient value. These enchantments trigger when we cast our instant and sorceries, and since our commander virtually doubles those, we’ll get more triggers than usual!

Because we create so many creatures with instants and sorceries, the actual creature count of our deck is very low. Some of you might be experienced with the power of Polymorph effects like Reality Scramble. With so few creature creatures, Polymorph effects always find a bomb, enabling us to basically tutor for an awesome card. Of course, evil people will find the Eldrazi Titans this way. Luckily for our opponents, we are relatively nice. The new Niv-Mizzet, Parun, for instance, is a very nice addition to the deck. Not only do we cast A LOT of instants and sorceries, but we’ll also draw A LOT of cards from our other spells. The Polymorph strategy opens the door to another token-hungry option as well: Brudiclad, Telchor Engineer, with access to black to boot!

We can also find Zada, Hedron Grinder! With the many tokens we run already, her ability will provide explosive turns. Cantrips (instants and sorceries that draw you a card) that target a single creature work especially well, because Zada will copy the spell and make you draw a card for each creature you control! There are a lot of options for just a single mana, like Crimson Wisps. In addition to drawing us tons of cards this way, cards like Shadow Rift can even make all of our creatures unblockable! Even better, Snap can create enormous amounts of mana. Some of our spells can double our tokens as well. Spawning Breath, Make Mischief and Fungal Infection target and create a token. We just have to pray our creatures have gained a point of toughness somehow.

Don’t forget that we can also target our opponents’ creatures in case we have none of our own. This may seem inefficient, but with Kess on the battlefield, these cantrips virtually draw us two cards for just two mana. Thus, even without Zada on the battlefield, they’re worth it. Radiate serves as another version of Zada (that can be cast again with Kess, mind you), and turn a seemingly stale board state into a targeting power fantasy.

The beauty is the triple synergy within the deck. First off, everything works with our instant-and-sorcery-centric commander: token generation, Polymorphing, and targeting. The token generation enables our Polymorphing, which then cashes in on the targeting aspects of the deck. The Polymorph sorceries target too, giving an (admittedly weak) interaction with Mirrorwing Dragon-like cards, leaving all our opponents to stare at us with pale faces as our mass of copied spells resolve.

Kess, Dissident Mage’s ability best lends itself to a control shell, because of the card advantage she automatically generates. Although we are not a control deck, we can still benefit from this fact. Chart a Course, for example, not only draws us two cards (twice), but also discards a card (twice) that can also be flashed back with Kess! Our graveyard really becomes a second hand. Transmute cards like Perplex serves double value as well, since you’re able to cast the spell after you Transmute them. This is how we turn our Clutch of the Undercity into a Zada, Hedron Grinder without the need for a Polymorph.

Secrets of the Dead and Burning Vengeance support Flashback in their own ways (and are surprisingly absent from Kess’s main EDHREC page). The cheap spells we run can serve double duty (or… triple duty?) with these enchantments on the battlefield.

Furthermore, we like value. Just pure value. However, with the constraints we put on ourselves of only reusing 15 of Kess’s popular cards, it becomes hard to get the best of the best. That’s why in some of these cases, we have to find the hidden gems. A card like Ponder is replaced for a card like Pulse of the Grid. This does not only comply with our self-imposed rule, but also helps keep the budget of a deck like this manageable (plus, I think the card is awesome).

We might actually not want our commander out as fast a possible with this deck; we want stuff in our graveyard to benefit from her ability immediately when she comes into play. For that, we need mana. It’s probably best not to think of Kess as a four-drop creature, but as a six-drop one (provided you have a two-mana instant or sorcery in your graveyard) and pretend she has and enter-the-battlefield ability. Grixis has serious trouble ramping, so the mana rocks are a necessary evil, even when implementing a unique strategy.

The mana base is what I normally build for my decks, mostly because it’s cheap enough for me to realistically buy for little money. The main lands of interest are Memorial to Folly and the “random” Haunted Fengraf (which isn’t so random if you’ve only got one creature in your graveyard). Because we run so few creatures, we’d like to be able to return them to our hand if they were to perish. These lands help us with that. The sacrifice clause in their costs is mostly negligible, as we’ll be quite a few turns into the game when we have to and can return our creatures. Kher Keep helps us generate those last few tokens when the sorceries that would normally do so are exiled from our yard.

The deck is surprisingly consistent. I was pleasantly surprised by the number of options this commander provides, and I’m sure that this list is far from the optimal one. Of course, the addition of Polymorph effects gives us an opportunity to do some truly broken stuff (as mentioned above, with Eldrazi titans), but I like to show other possibilities as well. However, as is, it provides a strategy hardly ever witnessed in Grixis.

The deck also adds 45 nonland cards that are not found on the Kess’s main page:

If you liked the concept of this article, I have a challenge for you: try to construct a deck that contains the strategy associated with its opposite colors. Jeskai graveyard, Esper creature-only, Rakdos enchantments; whatever you like! There’s a chance you suddenly discover how awesome such a deck can be, even though it’s not optimal. If you brewed something fantastic, please share it with me on Reddit or Twitter (@ellogeyen)!