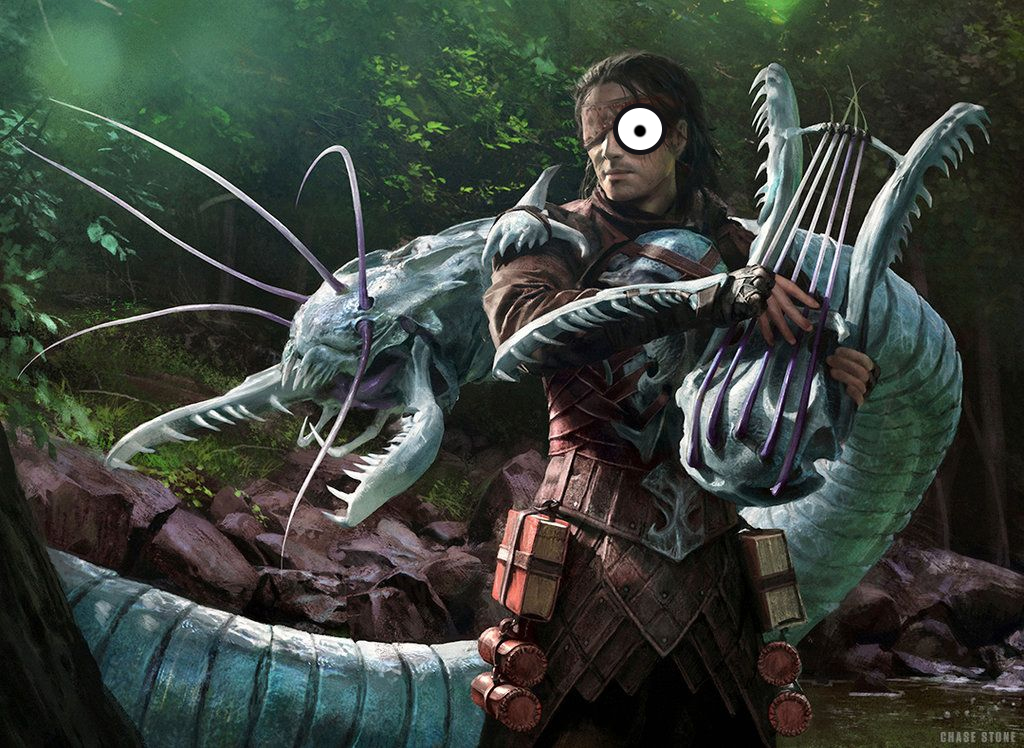 Greeting fellow EDH addicts. Welcome to another iteration of Shape Anew, where we will create a decklist around a commander with 500+ decks on EDHREC. Different strategies will be explored to find original strategies for these popular commanders. From this article onwards, the rules for additional cards will change slightly. Originally, we were not allowed to use more than fifteen nonland cards used in the commander’s average EDHREC decklist. Now, we have to use at least 40 cards not featured on the EDHREC main page of the chosen commander. Previous articles managed to comply to this rule already, so it only seems fitting to up our hipster-ness in this way.

The past three articles have tackled methods to create strategies that differ from the norm, but this is not the only way to reshape the 99 cards accompanying a popular commander. Another way is self-imposed rules. This is a very gimmicky method, as you’re denying yourself options for arbitrary reasons. However, it is also another way to create original decks, and sometimes discover awesome interactions.

“So, which set of arbitrary rules will we be setting for ourselves?” I hear you ask. Well… I like playing with words. Puns, obscure references, everything. English is not my first language, and my Magic hobby helped me discover that the English alphabet consists of 26 letters. If we dismiss the “X” as a letter – the reasons for which will be explained down below – only 25 letters remain. Those of us highly skilled in math can conclude that 4 x 25 letters = 100 cards in a commander deck. We could create a deck where all first letters of the card names in our library combine to create the “complete” alphabet 4 times over. Four times “A” as the first letter in a name, four times “B,” etc.

For our challenge, lands are most important. At each step, we’ll narrow our choice of cards, and without a decent manabase the whole deck falls apart. That’s why we’re tackling the land problem while we still have the full array of possibilities. A very important note to make is that we are mono-green. This narrows the cards we can actually choose from for the deck, which is nice, but also further narrows our possible lands. We really do need those green sources. Increasing your number of colors naturally increases your choice in lands and is a fine way to “lower the difficulty” of this deck-building method.

Basic lands are key. We’ll want as many Forests and Snow-Covered Forests as we can get our hands on. They come into play untapped and make green mana; an uncommon sight in non-basic lands. That’s why cards like Command Tower or Reflecting Pool actually are fine additions to the list. Luckily, further green sources are available. The fairly recent green Deserts like Hashep Oasis help us tremendously in this regard (and create repeatable graveyard removal with Scavenger Grounds).

Colorless lands are far more common, and thus need their own kind of focus. First of all, we need the lands that can find us the all-important forests: Myriad Landscape and Blighted Woodland. Secondly, we try to ramp ourselves some with Ancient Tomb and Temple of the False God. Then we try to find those lands that have difficult letters: already finding a solution for those cards loosens our choices further down the road. Think of cards like Yavimaya Hollow (which also protects our commander).

Some letters are more commonly used as the first letter in a Magic card name than others. For some letters, the choice is hardly there. This is why the letter “X” was excluded: it only has 2 choices in nonland cards and is therefore impossible to work with under our current self-imposed ruleset. If we count the number of cards starting with a certain letter, you get the result visible in the table below. From this we can deduce the critical letters are those with less than 100 cards: I, J, Q, U, Y, Z. (“O” is excluded because we already have 2 lands starting with the letter) The next set of card will focus on our commander. How can we improve his ability while complying to the alphabet? Another point of focus is the use of uncommon letters, which we’ve determined before. Three things improve the effectiveness of Yisan’s ability: granting haste, untapping, and adding counters. These allow for a quicker and increased usage of the creature-tutoring activated ability.

Untapping is very present in green’s slice of the color pie. For one-off effects like Benefactor’s Draught or Emerald Charm (which has some additional functionalities) to repeatable effects like Curse of Bounty. Best of the bunch are Awakening and Patron of the Orochi, as they will also help us untap the mana needed to use the ability again. Keep in mind that some of these effect apply to all players, so pay attention to the rest of the table. We only want our opponents untapping their Godsire if we get something in return.

Haste is a little less common in green. One big drawback is that some good haste enablers start with the most competitive letter in the Magic alphabet: the “S” (Swiftfoot Boots and Surrak, the Hunt Caller). Luckily, Lightning Greaves and Concordant Crossroads are available to us.

Adding counters was a little easier than initially anticipated. In the last few years, additions like Pir, Imaginative Rascal and Maulfist Revolutionary make this strategy more feasible. An additional benefit is the fact that both of them can be tutored by Yisan himself.

So how do we win? By curving out! That serves double duty for Yisan, as his curveballs are his most valued asset. However, before we know which cards to add, we need to know our current creature curve:

As evident, we lack any creature with mana cost 2. And since the number of available letters is quickly dwindling, we will focus on the function of these creatures in our deck: ramp and removal. For ramp, we have a few creatures that are all-stars in this deck. Gyre Sage can easily make 2+ mana, especially when we tutor for the right creatures. Whisperer of the Wilds is similar in the way that we need to drop our decent-sized creatures to further accelerate into even better-sized creatures. Now, concerning removal, we make use of the fact Yisan’s ability is at instant speed. Wasteland Viper’s deathtouch is more impressive that way. Nobody will expect Resilient Khenra. Kraul Harpooner is a seriously undervalued card, and shines even more when they can be tutored for at instant speed.

The second thing we need are higher-up creatures. First we’ll filled the 7-cost slot with Regal Force (awesome in it’s own right, especially in mono-green) and Deceiver of Form. Next, filling the 9-gap, we have Nullstone Gargoyle. Now, I know that getting Yisan to 9+ counters is magical Christmas land, but even Christmas happens once each year. If we can pull this off, it’s be awesome.

Now we’re at this marvel’s endgame. The last few cards, the last few lettered slots. The curve is okay, we can already win, so this last effort will focus on just adding value; cards we’re happy to have in our hands. This is our current alphabetical situation: Those last few cards can be exciting and give us some additional synergies. Of course we add in some final ramp like One with Nature, but that’s not what I’m talking about. For example, if we’d like to actually be able to cast Patron of the Orochi, it’s wise to add some more Snakes (with different mana costs) to the deck, so we can tutor them with Yisan and get our cost-reduction because of the Orochi’s Snake Offering. Therefore, we add Lotus Cobra and Ohran Viper. Another example is the haste-granting and creature-untapping abilities we already include in our 99. We can of course add some more creature that help in that regard, like Willow Satyr and Elvish Piper.

Thus, slowly but surely, we finish the quadruple alphabet.

I admit the deck is gimmicky, but that’s not a bad thing. Constructing the deck was actually very challenging and fun, and that experience alone was worth the journey. Choosing a mono-colored deck cranked up the difficulty setting a notch, so if it all seemed a little extreme for you, adding one or two colors makes it very manageable. The deck ain’t too bad, and would fare perfectly fine in a casual playgroup. Of course, the self-imposed rules did force us to make concessions in our choice of cards, but that’s part of the fun. I actually found a few gems I never knew myself, and fitting every card into the deck gave a wonderful feeling.

These 41 nonland cards in the deck don’t appear on the EDHREC page for Yisan:

Alphabetical decks aren’t the only option. There are a lot of ways to construct a pile of 99 cards using card names in an interesting way. An easy example is using only one letter as the first letter of each nonland card (I would recommend the “S” for some awesome snow-covered goodness). There are tons of options to try.

I’m interested how you, as a reader, liked this kind of article? If it’s as interesting to read as it was to write, I have some other gimmicks to exploit you might enjoy! Are you inspired to do something similar, or would you rather return to the casual strategies? In any case, the next article will return to old form with something exileting – I mean, exciting!