Solve the Equation – Are Vehicles Viable in Commander? 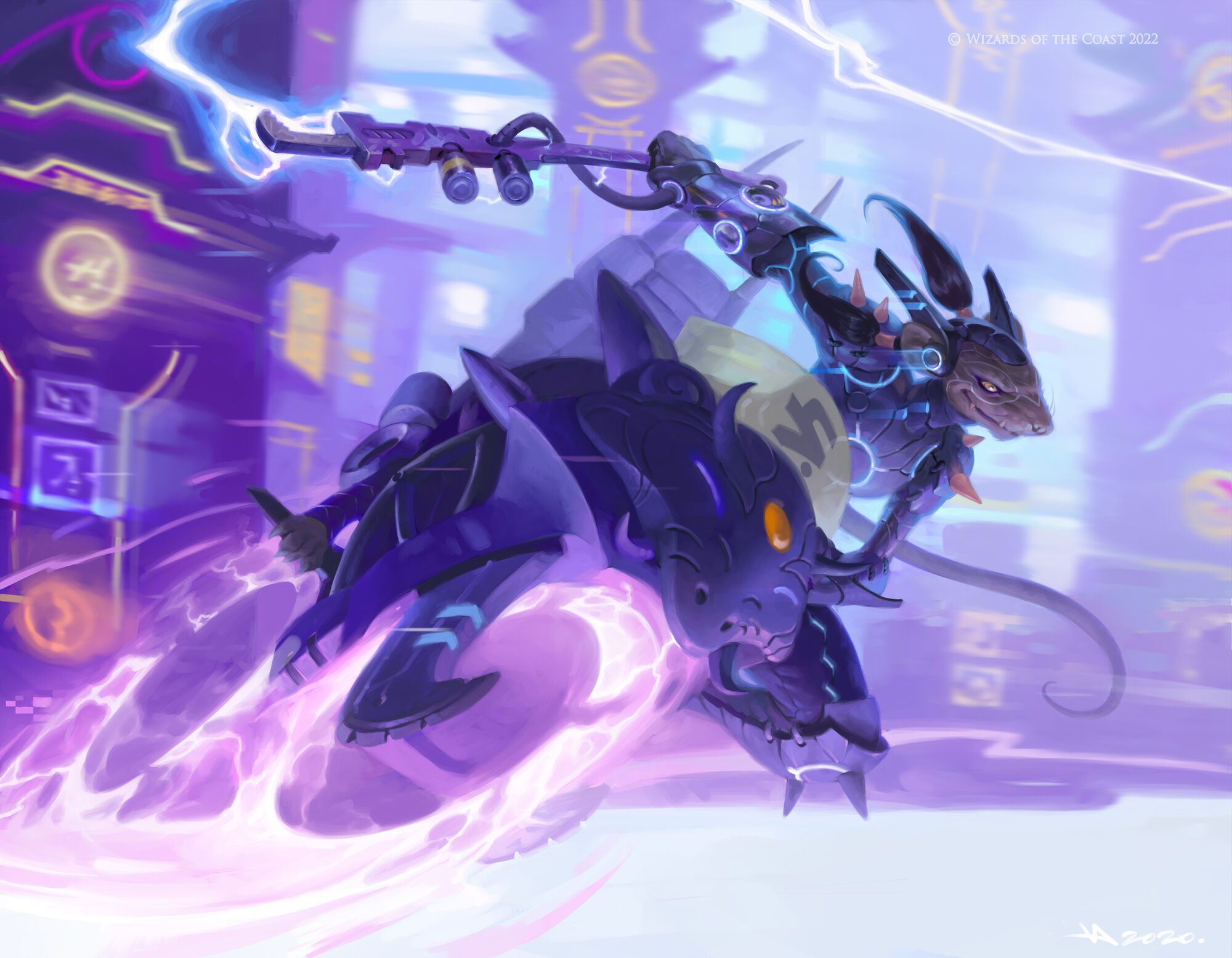 Feel like your deck just is not coming together? Welcome to Solve the Equation, where we take a look at the numbers and see what's responsible for your deck falling flat.

Today, let’s build a deck inspired by a recent design from SaffronOlive. The new Kamigawa: Neon Dynasty commander Greasefang, Okiba Boss lets us take a look at Vehicles, to see which rides have the most mileage in our format. The Okiba cause trouble while riding everything from motorcycles to helicopters, and in this deck, they'll do so with the help of Rat Colony!

Why a Rat Colony Deck?

The flavor is just too delicious to pass up with Greasefang, Okiba Boss leading the Okiba gang, but that isn't all this archetype has to offer. The most important stat line on creatures for a Vehicles deck is their power. Our Rat Colonies have a variable power that can go very, very high. Most importantly, with our commander out, even one Rat Colony will have 3 power (enough to Crew 78% of Commander-legal Vehicles).

Two weeks ago we took a look at hypergeometric probabilities, and we can use some of what we learned there to great effect in this deck, too. However, this deck has more nuance than our last deck because now we need two pieces of the puzzle to fit together. We need to draw both our Rats and our Vehicles. If you're not a fan of whipping out your calculator and plugging in the numbers yourself, then here's an awesome tool to help you calculate the percentages fast!

Decks like this one can be tricky to build, as the strategies compete for spots in the deck, so balance can be hard to find. I decided I wanted to aim for having both a Vehicle and a Rat in my opening hand about 50% of the time. After testing the numbers on a few different variations, I landed on about 19 Rats and 15 Vehicles. This put our odds at:

Now let me show you one last step we can use when testing to see if we will draw two Vehicles, and I promise this equation will be much simpler than last article’s!

This equation represents the probability that both event A and event B occur, and we solve it by simply finding the product; in this case:

Perfect! This leaves us right in the sweet spot I was shooting for. Note that my build focuses more on the Rat Colonies than the Vehicles, and this is why I prioritize them, but these same equations can be used to tailor your strategy however you wish. Now let’s take a step back from last article’s hypergeometric probabilities and look at some good old-fashioned combat math. When I look at Vehicles, I imagine that they were designed to give the attacker some additional angles of attack in combat. This is great because, as much as we love to say "math is for blockers", traditionally the combat step favors the defending player. This one will be a bit of a palette cleanser for anyone who is tired of getting their calculator out when building a deck. Buckle up, let’s take a look at how even the simple math math in Magic can be analyzed to improve our deckbuilding. 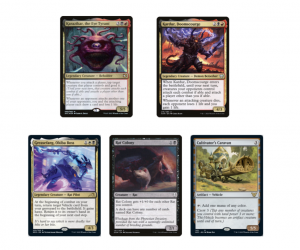 Let’s take a look at where Vehicles can give us the edge on board. In this case, if we don't attack with our Vehicle, we realistically cannot attack Player 2 with Greasefang, Okiba Boss or Rat Colony. Both can be profitably blocked by our opponent leaving our board whittled and open for a crack back.

Now let’s consider instead that we attack with our Cultivator’s Caravan. Yes, we forfeit 2 points of potential damage, dropping from 7 to 5. However, we set up a much more profitable exchange for ourself. Kardur, Doomscourge now can only chump block at best, and Karazikar, the Eye Tyrant can trade, but in that case player 2 is down a creature and you aren't down at all with Greasefang, Okiba Boss, making Kardur, Doomscourge's attack awkward at best.

This is a simple example of the edges that Vehicles can gain us in combat, and this is what has allowed Vehicles to wreak havoc in both Limited and constructed formats. It may be great, but how important are these marginal attack advantages in Commander.

I wish I did not have to relay the bad news about Vehicles in Commander in my article about Vehicles in Commander, but here we go: the stat lines that make Vehicles work well in Limited and Constructed formats just do not translate to Commander. There are a number of reasons this is the case, and chief among them are the life totals of our opponents. Aradara Express, for example, is a Vehicle that hits for 8 damage, which is 40% of an opponent’s life total in a 20-life format. This is the second-hardest-hitting Vehicle, with only Demolition Stomper offering more power. Double the life totals in Commander, and that now means the 8 damage is hitting for just 20% of one opponent’s life total. To make matters worse, we have three opponents with a combined life total of 120, meaning that 8 damage accounts for just 6% of the total damage we need our opponents to take.

Let’s consider an example where we have just one Rat Colony. It can Crew a Vehicle with Crew 2, which have an average power of 3.67 across all Vehicles. This means, on average, that this Vehicle will only give us a power boost of ~1.67 power in comparison with the power our Rat already has. These power boosts only get uglier as the numbers go up.

When considering each of these Vehicles, it's important to remember that these are averages (mean values) and that each Vehicle has its own power/toughness and mana value, which factor in to how playable these cards are. However, the point that I want to stress is that these marginal boosts are not enough to make a noticeable difference in Commander, where the damage output required to knock out an opponent is so much greater.

At the moment, I propose we look at Vehicles in a different light, taking advantage of what makes them unique, and of course using them to supercharge our Rat Colony strategy.

So this may be a Vehicle deck, but it is perhaps more accurately a Rat Colony deck. Our Vehicles are used to synergize with our commander and move our strategy forward. Magic’s current fleet of Vehicles are lackluster attackers and are likely to play a support role in decks until Wizards of the Coast prints Vehicles that are pushed for a multiplayer format. I choose to look at this as an opportunity, rather than a negative. There are plenty interesting ways to incorporate Vehicles into our deck's strategy.

So Why Vehicles At All, Then?

Vehicles have a variety of properties that make them unique. The biggest question I would ask myself when considering if Vehicles fit in my deck is this: how do these synergize with my commander? Cheating out these Vehicles with a creature that costs just three mana can be game-changing. Greasefang, Okiba Boss also has a power of 4 and is capable of piloting every Vehicle in our deck on her own. This effect is very powerful even if limited to Vehicles. A card such as Sun Titan can only recur permanents with a mana value of three or less, but Greasefang, Okiba Boss can grab us Vehicles as large as Parhelion II.

Beyond that, Vehicles are only creatures when we Crew them, which means they are much harder to remove. They dodge sorcery-speed creature removal, including and especially board wipes, making rebuilding a breeze. We can use this to our advantage; cards like Damn and Austere Command can be one-sided board wipes, and with cards that can recur our Rats from our graveyard, we can hit hard, potentially even on the very the turn we wiped the board.

So How Are We Going to Pick Our Vehicles?

We allocated 15 spots for Vehicles, so we need to be picky with which Vehicles we choose to include. The #1 thing to remember is that we do not care how big they are. The math proves that none of these Vehicles will be big enough on their own to make a significant dent in our opponents' life totals on their own. We want Vehicles that generate value throughout the game. We want the efficient Vehicles that will get us where we need to go. Specifically, I chose Vehicles that incorporated the building blocks I would want in any Commander deck (i.e. ramp, removal, and card advantage).

There are 4 key criteria I decided to focus on when selecting my Vehicles:

42 Vehicles are in our color identity

23 of the 54 Vehicles have evasion

20 of 54 have attack/damage triggers

8 of 54 have relevant enter-the-battlefield triggers

The best of the best are going to be the Vehicles that satisfy at least 2 of these criteria while also being in our commander’s color identity. This is the best of our fleet:

A few others technically fall into this category, but I haven't included them here because their effect is solely combat-based and not relevant to generating value and advancing our deck’s strategy.

Now that we have the core of our Vehicle build, we can supplement our deck with further Vehicles as well as cards that support our deck’s gameplan. Entomb is great for sticking a key Vehicle in our graveyard for our commander to bring back. And of course, I included a healthy bit of Rat Colony synergy with cards such as Secret Salvage and Echoing Return.

Unfortunately, the math is currently not in favor of Vehicles in EDH, which makes selecting Vehicles for your deck more difficult. There is no clear-cut equation for when to or when not to play Vehicles. The only thing I can say for certain is that you shouldn’t be playing Vehicles to help in combat. They simply are not efficient enough to be worth the card slot. However, we can leverage Vehicles for what they can do outside of the combat step, whether that is synergizing with our commander or helping us recover from board wipes.

I hope you enjoyed the ride! Let me know what you think about Vehicles in EDH in the comments below!