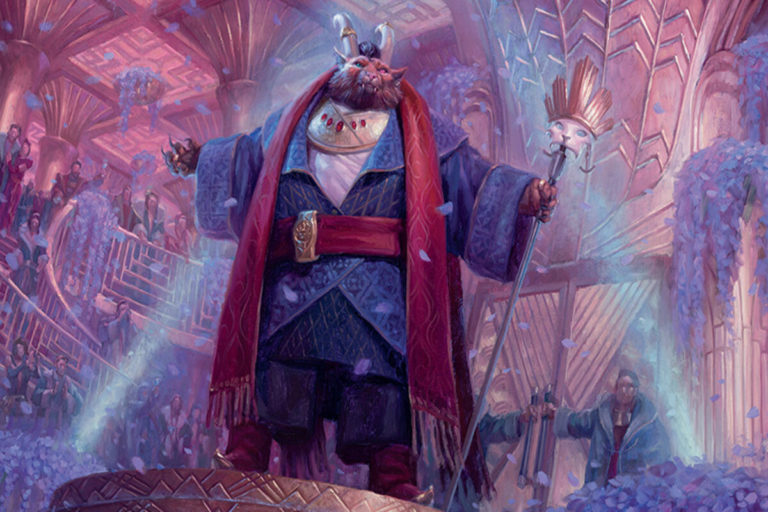 Do you love giant board states? I sure do! Nothing makes me feel better than hiding behind a wall of tokens that's pouring onto my opponents’ playmats. So naturally, the Caberetti family leader caught my eye. Jetmir, Nexus of Revels demonstrates the power of quantity over quality.

Jetmir, Nexus of Revels functions almost like a Craterhoof Behemoth in the command zone. This card epitomizes the phrase “math is for blockers”. If you have enough creatures, he can turn even a 1/1 into 8 power of trampling damage headed at an opponent’s face. Immediately the mathematical side of my brain began to race, imagining the greatest number of creatures I could generate with a single card. Luckily, I don’t have to imagine. We can fill our deck with only the cards that have the best ratio of mana spent to creatures generated. Let’s crunch the numbers and figure out what cards those are!

We want as many creatures at our party as possible. Remember, the size of the creatures is much less important than the quantity of them. Jetmir, Nexus of Revels can turn almost any creature into a threat, and we can maximize the boosts he provides by using smaller creatures. Let’s look at an example.

Rampaging Baloths and Emeria Angel both create tokens with Landfall. The first token is a 4/4 while the second is just a 1/1

Let’s take a look at how much of a boost Jetmir’s ability gives to a creature when you satisfy all of his abilities:

We can maximize our damage by prioritizing spending less mana for more creatures, regardless of the size. In this case, Emeria Angel is two mana cheaper and can potentially generate multiple creatures before Rampaging Baloths could even hit the battlefield.

So far, Jetmir, Nexus of Revels deck data is showing an average of 28 creatures. Assuming just those stats, without considering tokens, we'd need to draw more than a third of our deck to even see enough creatures to get to nine total creatures for Jetmir's effect. This is why token-makers are so important, and why so many of those 28 creatures generate more bodies on the battlefield.

With some of the math better understood, let’s take a look at which creatures give us the most bang for our buck.

Let’s start with the enters-the-battlefield effects. Many creatures can create multiple bodies right when they come into play

Heck, Magic is full of X-spells, such as Secure the Wastes. That spell scales and its ratio is close to 1 mana per creature! one creature per mana spent. These spells are great, and we should include some in our Jetmir deck, but we also need a good balance of creatures, too. Therefore we'll apply that mathematical principle to the creatures we choose, and we'll prioritize creatures that fulfill a similar role, and fit within that ratio of 1-2 mana per creature generated.

Instead of Ghired and the Wurm, let’s take a look at what else 5-6 mana can buy us:

If we shell out a little more mana, the deal gets even sweeter. Hornet Queen costs approximately 1.4 mana per creature, which is a good base rate, and they have deathtouch and flying. The double strike that Jetmir, Nexus of Revels provides makes these tokens impossible to block profitably.

Avenger of Zendikar is a true all-star in this deck. Jetmir, Nexus of Revels could be the only other creature on our side of the battlefield, and Avenger of Zendikar can come down with seven Plants so that we immediately gain the full benefit of our commander. Plus, Avenger’s mana-to-creature ratio only gets better as the game goes on and we get more lands! Meanwhile, Myojin of Blooming Dawn doesn't have an enter-the-battlefield effect, but we don't mind at all, because it too will instantly satisfy Jetmir's ability all on its own.

An Army of Attackers

Not all creatures can generate bodies upon entering the battlefield, so we'll need a few other ways to generate multiple creatures. Many of the best rates will be attached to attack triggers. Once again, I caution you against the temptation to create large tokens using Magic’s biggest token generators, such as Giant Adephage. These cards take too many turns and cost too much mana to generate enough creatures to unlock the full power of your commander quickly.

Krenko, Tin Street Kingpin, on the other hand, only costs three mana and curves beautifully into our commander. If you attack with him on turn four after casting Jetmir, his ability will trigger, adding a counter and creating two additional creatures, giving it a rate of 1 mana per creature after just one attack and immediately qualifying for Jetmir, Nexus of Revels' first boost.

The math on Adeline, Resplendent Cathar is even better. She'll create three tokens upon her first attack, giving her a cost of just 0.75 mana per creature after just one swing, not to mention she can be a finisher once we have enough creatures on the battlefield!

Finally, many other cards dole out tokens more slowly and consistently. Dragonlair Spider and Arasta of the Endless Web can create a terrifying number of Insects and Spiders whenever our opponents cast a spell, but there are some creature-generating triggered abilities I would stay away from. Cards that only trigger on our upkeep aren’t up to snuff here - for instance, Dragonmaster Outcast is a great card, but I think we can do better. Tendershoot Dryad has a heftier mana cost, but will trigger more often and fill the board quickly.

Similarly, many cards generate creatures with Landfall, but many of these don’t make enough creature tokens quick enough. Outside of a dedicated Landfall deck, we can only reliably have one Landfall trigger a turn. Maja, Bretagard Protector and Omnath, Locus of Rage do not have a profitable enough "mana spent per creature generated" ratio to justify their high mana cost, but there are two big exceptions in the Landfall category. Felidar Retreat also pumps up your board, which works so with our commander, first enabling his effect and then amplifying it, and Scute Swarm is frankly Jetmir's best friend. It's actually the first card that popped into my head when I first saw Jetmir! Even with one land drop per turn, this will fill the board so quickly, and within just a few turns your mana-spent-to-creature-count ratio will be splendid.

Let’s take a look at how many potential creatures this deck can generate:

There are so many cards that can create a bunch of tokens. What are your favorites? What cards did I miss? Let me know in the comments below!