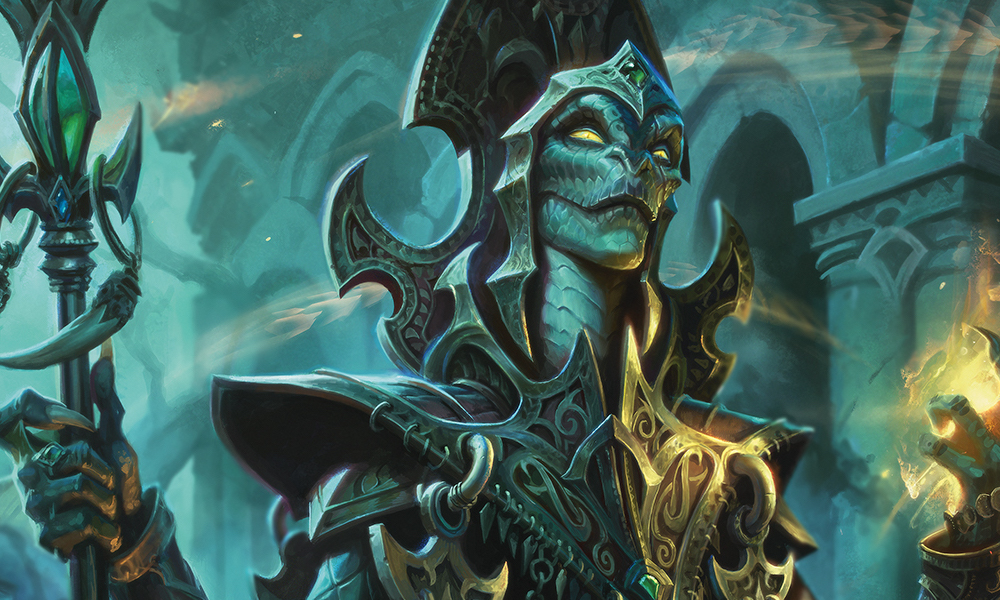 Happy belated birthday, Commander 2019! Your present: a thorough review of your first year.

This is The 600, the article series where we guess how popular new commanders will become after one year. August 23, 2020 marked C19's one-year birthday, so it's time to check our work.

A few rules: the line is 600, so if I guessed “Over,” that means I predicted the commander would lead over 600 decks. “Under” for under 600. Finally, note that I pulled the final deck counts on August 23rd of this year.

You can find last year’s article here. However, as always, I’ll be referencing that article throughout this one, so no need to jump back if you don’t feel like it.

Ready for a review? Let’s begin.

Let’s begin on a positive note.

After speculating that this was some lovechild of Melek, Izzet Paragon and Shu Yun, the Silent Tempest, here’s what I wrote in last year's article:

"I like this card. I don’t think it’ll be an all-timer, but it’s versatile, potent, and could probably kick my butt."

That analysis proved accurate—not so much the butt-kicking, but more the modest popularity. Elsha became C19's most popular commander, but it hasn’t found its way to the Top Commanders page. Keep working on those karate lessons, kid. You’ll get there someday!

K’rrik, Son of Yawgmoth is the most popular mono-black commander in the history of EDHREC, edging out his pops by about 400 decks. It's easy to see why—there's no better feeling than casting a Phyrexian Obliterator for zero mana.

Never thought I’d read the text “Whenever an Egg you control dies” on a card, but here we are. As noted in last year’s article, Atla runs on three Ps: “Populate, pingers, and pretty big stuff.” That comes easy to Naya, especially with recent printings of pretty big stuff like Quartzwood Crasher, Terror of the Peaks, and Yidaro, Wandering Monster. We received comparatively few of the other two Ps, but that’s all right—there were plenty to begin with.

Our next Easy Over prediction…

I was being a bit of a sourpuss when I wrote my thoughts for this one. After complimenting Kadena for an entire paragraph, I undercut the whole thing with this:

“Even as a Sultai guy, I’m personally not wild about this card.”

Why? Because I love Morph as a Limited mechanic, but not so much in EDH. That said, Kadena basically says, "Pay zero: Create a 2/2 that should turn into something relevant later. Oh, and draw a free card, too." Though I wasn't (and still am not) excited about this card, I couldn't deny its popularity.

Since every commander set needs a nod to Ravnica, here’s our next Easy Over commander:

Not sure why this guy got exiled—he's clearly quite Populate.

Lame wordplay aside, Ghired's pretty sick. He's a face commander with a splashy ability and massive stats. And it looks like folks took my advice from last year...

Our final commander from this category is...

Last year I led with a Devo joke. Because of, ya know, the whip. Probably should've been an Indiana Jones joke, but so it goes. Now for some actual analysis, courtesy of last year's article:

“You can use the discard clause to trigger Madness or trade in late-game lands for impactful graveyard reinforcements; I recommend Grave Titan. Furthermore, Chainer’s second ability applies to more than just the creatures he brings back. So any creature revived with Reanimate, for instance, gets haste.”

Let’s begin with perhaps the easiest pick of the set.

I might’ve had a bit too much fun at poor Tahngarth’s expense last year when I gave him the Award for Most Convoluted Rules Text. Here’s a snippet from his acceptance speech:

“I want to thank Wizards R&D for giving me a novella for rules text. I basically see people fighting and can’t resist joining in. You’ll notice that I must be tapped to make it happen, so I recommend playing some Vehicles. Other than that, I don’t do much as a commander.…”

Update: Tangarth lost his title to Syr Konrad, the Grim.

Our next unpopular commander is...

I’ll admit, I was tempted to give Gerard an Over. Here was my rationale:

“...For players of a certain age, Gerrard is a pivotal figure...But Gerrard’s original incarnation is terrible. Almost unbelievably so. That makes me think old-school players will jump all over anything that’s even remotely playable.”

However, these days, players view Boros by a single criteria: does it offer any semblance of card advantage?

That's basically what happened with ol' Gerry. Plus his Boros predecessor, Feather the Redeemed, was probably still distracting deckbuilders.

This next one was surprisingly controversial:

Yes, I received ample pushback for poo-pooing this card. After some idle chatter about setup cost, I summed things up with this statement:

“This card is cool enough to see some early action. However, I think players will soon discover it’s just not that good.”

Though it didn’t reach 600, I will admit that 315 is respectable, and far better than I thought possible for Ray. Surprises all around!

I won’t quote last year’s article, since most analysis was based on Google search results for the query “mtg legendary wall.” Suffice it to say that my prediction proved correct.

But not by as much as I thought. I think I underestimated just how stale this card can get. Not only can it not attack—it also limits who your other creatures can attack. Magic is usually best when there are many decisions to be made. Limiting those decisions does not bode well for a commander's popularity—even one that eked out the 600 mark.

Last year I called Volrath “a famous character in a popular color combo with versatile upside.” Turns out that was true—but only barely enough for 600 decks.

That said, this commander can actually do some cool stuff. You get a card a turn with Generous Patron. You can blast an artifact or enchantment every turn with Wickerbough Elder. You can even copy a creature with a prey counter from Tetzimoc, Primal Death on it (before you kill it, of course). Surprising that it didn’t earn more fans.

I suppose there’s tons of competition in Sultai these days, what with all-stars like Muldrotha, the Gravetide, Yarok, the Desecrated, and the recently printed Zaxara, the Exemplary, just to name a few. But you keep stealing those shapes, Volrath!

And now we come to it: the most embarrassing part of the article. Here’s what I got wrong, starting with perhaps my wrongest pick:

My prediction: Over (and Can’t-Miss Pick!)

This one still floors me, especially considering how level-headed and reasonable my initial evaluation was.

“The feature attraction is the second line of text, which should produce a fair amount of fireworks.”

“For similar commanders, look no further than Kess, Dissident Mage...Here we’re adding a mana and trading black for white, which is likely an upgrade for the Spellslinger archetype.”

Alright, maybe I was a little too high on this card. The Cho-Manno comment is fair, but comparing Sevinne to Kess is like comparing Baker Mayfield to Brett Favre (which, by the way, actually happened). Kess is the most popular Grixis commander of all time, after all, while Sevinne is about as popular as Rin and Seri, Inseparable, a card that appeared just two months ago. I am officially humbled.

For my next lousy Over pick, try this lumpy troll:

“Both cost 1GB, both create tiny creature tokens, and both reward callously slaughtering those tokens.”

True dat. Next, my logical premise.

“When two commanders occupy the same niche in the same colors, the decks often go to the better card.”

So far so good. Now stick the landing, former self…

“So which of these two is more powerful? My pick is Grismold.”

Clark Grismold is good, yes, but it requires you to play several cards that are abominably bad in a vacuum, including Illness in the Ranks and Virulent Plague. Aside from those, there’s a fair bit of overlap between Grismold and Slimefoot decks. My new theory: most players who would’ve built the former had already built the latter, and they didn’t feel like changing.

That’s it for my incorrect Overs. Now it’s time for…

The Sevinne pick was bad. This might’ve been worse.

My thoughts on Anje were fairly lengthy, but the salient sentence is this:

“I question whether there’s much interest in a Madness commander to begin with.”

Looking back on it, the above sentence is sort of like questioning if cats like tuna. Yes, there’s a huge interest in a Madness commander!

Of course, there’s a bit more to it than that. Anje enables a semi-Storm strategy by discarding tons of Madness cards for free, then stacking discard triggers for payoffs like Glint-Horn Buccaneer, Brallin, Skyshark Rider, and Bone Miser. A cool card, and far more complex than I gave it credit for.

Next we have a ThunderCat, ho!

My skepticism about this commander came down to this:

“There are already several commanders that mandate attacks. None are popular. Fumiko the Lowblood, Grenzo, Havoc Raiser, Thantis, the Warweaver… they seem cool in the abstract but rarely make a splash. Therefore, I’m out.”

The difference is, Marisi is actually good. Goad is nasty in any multiplayer game, especially in metas with many creature-based decks (that's most of them, I would guess). Plus, Marisi triggers when any creature deals combat damage. That means Spirit en-Dal, Mother of Runes, and even Gingerbrute become playable. Still a surprising finish, though I suppose I see the allure.

Last but not least, we have a guy I described as “what Lord Voldemort would look like if he was played by Sir Patrick Stewart.”

This one has played out sort of like Death’s Shadow in Modern; you aggressively lower your life total to pump your big threat. I mentioned Read the Bones, Bolas’s Citadel, and Treasonous Ogre in last year’s article, but I failed to mention Wall of Blood, Necropotence, and Act of Aggression (fun fact: that last card depicts Babar on bath salts).

Nonetheless, I’m still surprised to see this card surpass 600 decks. I might get pushback from his fans, but I feel like Grevan’s popularity is a product of his inclusion in a Commander release. If this guy appeared in any old booster expansion, I doubt he’d do so well.

Up next, we'll be heading back to Zendikar. Until then, keep on predicting!