The 600 – Predicting the Popularity of Guilds of Ravnica Commanders 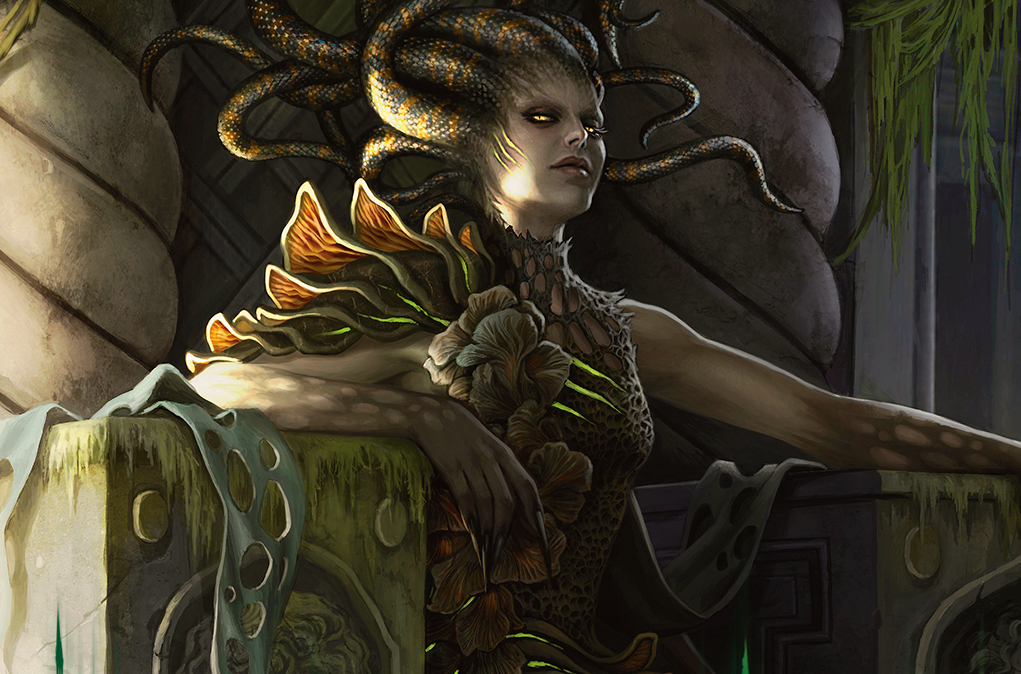 Love baseless speculation? Keep reading, pal. It’s about to get super baseless up in here.

Today, I’ll predict the popularity of every new commander from Guilds of Ravnica. (Before reading further, don’t forget my 600 article for Commander 2018. Extremely baseless). This plane has given us popular commanders in the past including Niv-Mizzet, the Firemind, Trostani, Selesnya’s Voice, and Grand Arbiter Augustin IV. Will the second return stack up?

I must admit, I’m pretty excited for this set’s new batch of commanders. Before we get to them, let’s review our system.

I’ll give each commander a prediction of “over” or “under.” This means exactly what it sounds like: “over” for more than 600 EDHREC decks, and “under” for under 600 decks. The line is set at 600 because it feels like the right number to indicate popularity, but it’s not impossible to reach. We’ll check back on their ranks one year from now (around September 27, 2019) to recap our picks.

This is a Ravnica set, which makes me think sales will be high. Very high. Therefore, I believe the commanders from this set will see a general bump. We know that Ravnica is Magic’s most popular setting. And for the most part, decks on EDHREC reflect that. An anthem on a stick reminds me of Tolsimir Wolfblood. Tolsimir is a neat commander, but it has only 189 decks on EDHREC. Nonetheless, Trostani Discordant’s effect works no matter your creatures’ colors. In addition, it also dumps out two tokens rather than just one. That’s five power and nine toughness over three bodies, all for just five mana. Also, four of that power is lifelink. Even that last line of text is interesting. So far as I know, we’ve never had a commander with the Homeward Path effect on it.

Overall, I like the versatility here. Though we’re not revolutionizing Selesnya, it’s just open-ended enough that I think players will enjoy experimenting. Trostani supports swarm, Convoke, blink, and midrange creature strategies effectively without being too linear in any of them. Despite the creepy picture, it should follow in the footsteps of its previous version.

Emmara, Soul of the Accord Forgive me if I sound like Gordon Ramsay, but it’s hard to get any worse than the original Emmara. Is Emmara, Soul of the Accord any more palatable?

For starters, we’ve improved the mana cost drastically. This card even reminds me a little of Rhys the Redeemed, who boasts 1,189 decks. Not a bad start.

Emmara’s most obvious synergy starts with the Convoke mechanic. Tap her, reduce a casting cost by one, get a token that reduces future costs on other cards. She’s also an excellent pilot for most Vehicles. Some astute combo players have already pointed out the Emmara + Intruder Alarm combo. At that point she’s no longer your commander, but I’m sure there’s similar jank potential in green and/or white.

Yes, these synergies are interesting. Hoever, I doubt they’ll be enough to get players excited. I mean, do you know any EDH players who’d be delighted by this sentence: “I tap my 2/2 and create a 1/1”? Neither do I. More seriously, the latest incarnation of Niv-Mizzet improves on the previous two in several ways. The first line of rules text is gravy. The second is mandatory. The third is straight from Niv-Mizzet, the Firemind, so this combos with Curiosity and Ophidian Eye. Good so far, and it gets better.

Niv-Mizzet, Parun adds synergy with instants and sorceries, a detail which the previous versions omitted. That’s subtly powerful, considering it mitigates his fail case. Imagine investing six mana into Niv only to see a Wrath of God cast by the next opponent. Because of his wording (“whenever a player casts and instant or sorcery spell”), we get a card back, plus a free point of damage to fling.

That’s just the worst case scenario. Imagine untapping with this dude. Every instant and sorcery cantrips for you, plus they fire a point of damage at any target. Your Arcanis the Omnipotent now casts a free Lightning Bolt. Your sweet new Jump-start spells now put you ahead on cards. Oh, and you still have a 5/5 flying Dragon Wizard!

I believe this adds up to a potent threat that’s built for a multiplayer environment. The casting cost is steep, but when has that ever deterred EDH players? On the vanilla test, a six mana 2/3 gets a “PAM” for “Possible Accidental Misprint.” Fortunately, Izoni, Thousand-Eyed has a lot of redeeming rules text.

Imagine having just three creatures in your graveyard for Izoni’s Undergrowth ability. That’s 5/6 worth of stats over four bodies, which feels like a low-end outcome in the colors of Dredge and self-mill. Her second ability offers all-important card draw and even potentially fuels her first ability the next time you cast her. Also, Golgari is the most popular two-color pair EDHREC. There are even some potential Elf synergies.

Yes, the mana cost is concerning. Also, Izoni sounds more like a brand of microwave pizza than a guild leader. Nonetheless, I’m feeling bullish on this card’s popularity. Fact: Boros is the only two-color combination on EDHREC with no commanders over 1,000 decks. Can the latest version of Aurelia change that, starting with 600 decks in the next year? Let’s start with stats.

A 2/5 for four mana is below the curve, though the text box mitigates my concerns there. Speaking of that text box—it’s sneakily versatile. The obvious play is pumping Aurelia, Exemplar of Justice and swinging at the nearest enemy with a 4/5 flying, vigilance, and trample Angel—plus you add a counter to your next-best threat. That’s a pretty good baseline.

But that’s not all. Though Aurelia herself doesn’t have haste, she still provides two points of hasty power to anybody you want. That ability also stacks nicely with multiple combats. Plus, vigilance is a great mechanic in a multiplayer format. Finally, her low base power gives her nice play with other creatures with Mentor. Pretty sweet.

All that said, people seem to be pretty down on Aurelia. I’m seeing a lot of comments like “yet another Boros beatstick.” Personally, I’d describe her as an efficiently costed, versatile Boros beatstick with an immediate impact on the board. Sadly, nobody else shares my enthusiasm. Okay, Aurelia didn’t do it for you. How about Tajic, Legion’s Edge?

He’s certainly priced right. A 3/2 body for 1RW with haste is nice, albeit not that impactful in EDH. Mentor is also a nice little touch, especially for token decks. Soldier tribal isn’t even out of the question for a guy like this.

Could the non-combat damage clause push him over the edge? Maybe. The closest we’ve seen to that ability is Iroas, God of Victory’s static text, though Tajic’s will be more useful sometimes. I like the sound of going wide, then casting Blasphemous Act, don’t you? Yes, Tajic will die, but he only cost three mana to begin with.

All this said, Tajic, Legion’s Edge is still an undersized Boros commander with several niche abilities. I do like the flames shooting out of his sword, but I don’t think 600 players will. At first glance, Lazav, the Multifarious is less splashy than its previous version. It doesn’t have that same outrageous mana cost, doesn’t have hexproof, and it doesn’t support everyone’s favorite casual win condition, milling (though I’ll admit it encourages self-milling). Will that drive down its popularity?

Nah, I don’t think so. Lazav is destined for 600 decks, and beyond.

First of all, there’s precedent for wildly popular two-mana commanders. Just take a look at Ayli, Eternal Pilgrim, Hapatra, Vizier of Poisons, Karlov of the Ghost Council, and Thrasios, Triton Hero. When you offer a small early game body with a potent late-game ability, players dig it.

Furthermore, Lazav can do nasty stuff. For example, one kind internet commenter pointed out this play: Pay two, Lazav copies Invisible Stalker, attacks. Opponent declares no blocks. Now pay seven, Lazav copies Phage, the Untouchable. Opponent dies. Yes, you’re forced to play a two-mana 1/1 and a creature that literally kills you if you cast it the wrong way, and it costs nine mana in total. But still! We’ve proven Lazav’s versatility and potential power.

All in all, Lazav fits the bill for a versatile commander with major upside, similar to Meren of Clan Nel-Toth and Animar, Soul of Elements. Heck, it might go down as this set’s most popular commander. Etrata’s obvious drawback is its shuffle clause. Or is it? There are ways to circumvent it, starting with Ninjas. When Etrata deals damage and her trigger goes on the stack, you can Ninjutsu a Ninja to switch with her and return her to hand before she’s shuffled away. This is because Etrata is still considered an “attacking creature” after she’s dealt combat damage until the very end of the combat step. At least, I think so. Judge!

In addition to its novelty, Etrata also offers diverse deckbuilding options. Some players will try that Ninjas strategy. Others will build with tons of tutors so it’s easier to find Etrata once she’s made her kill. I myself want to build a Polymorph tokens deck. Some tribal enthusiasts might even build around her Vampire type, as tribal enthusiasts are wont to do.

Etrata’s getting 600 decks, easily. Book it.

My favorite part about these articles is that we won’t find out how wrong I am for another year. Until then, enjoy the picks. And enjoy Guilds of Ravnica!

Kyle Massa is a writer and avid Magic player living somewhere in upstate New York with his wife and their two cats. His current favorite card is K’rrik, Son of Yawgmoth. Kyle can be found on Twitter @mindofkyleam.