The 600 - Predicting the Popularity of Zendikar Rising Commanders 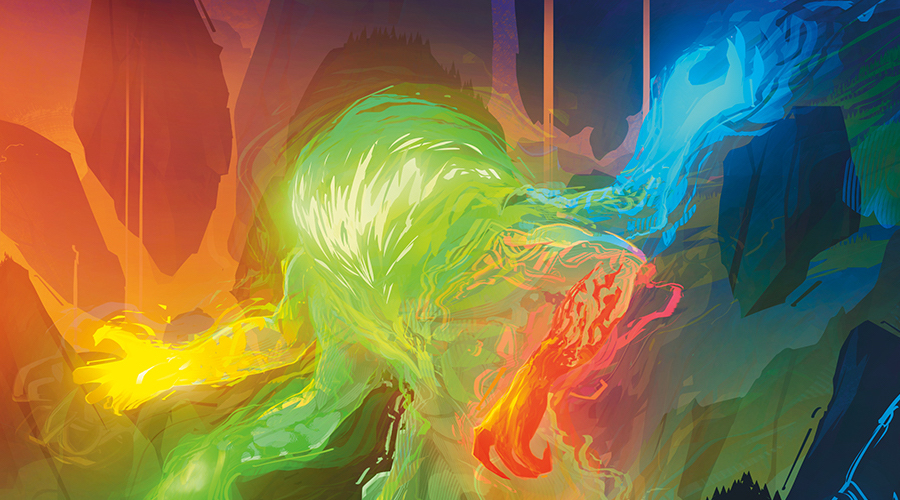 Zen and the Art of Zendikar Predictions

Hope you brought your Expedition Map, because we're back on Zendikar and I have a poor sense of direction. Maybe my sense of foresight is a little sharper.

This is The 600, the article series where I try to guess whether new commanders will earn over or under 600 decks on EDHREC after one year. As you've probably guessed, "Over" means I predict over 600 decks, and "Under" means under. There's also a "Can't-Miss Pick," which is my called shot of the set.

I can't tell if Charix is Dungeoness or Alaskan Snow Crab. Either way, I would eat it—though most EDH players would rather cast it.

Yes, people are hyped about Charix, either for Crab tribal or its size 17 hiney. For what it's worth, Charix stands at 823 upvotes on r/EDH, more than any other commander in Zendikar Rising.

However, I don’t believe said hype will carry over to commander status. Charix slots too well into decks featuring High Alert, Towering Titan, and Assault Formation—none of which work with Charix as the King Crab. Pass the butter, please.

No wonder there are no more Bloodchiefs. Drana's dumping, like, three pints into the air for no good reason! And if that doesn't curb her popularity, I'm sure Edgar Markov will.

With a whopping 4,115 decks, Eddie Mark stands alone as lord of the Vampires. That's going to impact any Vampire commander's popularity, even one as lightly tribal-based as Drana. One might try reanimator shenanigans with her instead, but options are limited among nonlegendary mono-black targets. Also, the Red Cross must be calling her non-stop, which leaves little time for commanding decks.

Word on the street is that this guy’s perfect for Shadowborn Apostle decks. The Apostles are Clerics, after all, so if you sac' six with Tabby on the battlefield; that’s six counters and six cards for six life (which you probably get back, since Tabby now has lifelink). And with 1,059 decks in the Shadowborn Apostles theme, there’s strong evidence Taborax could surpass 600.

This problem is this: 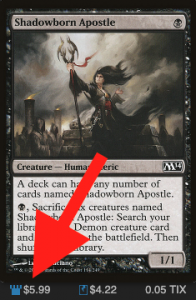 That’s roughly two times more than our commander is worth, and we’d need at least 20 copies to make the deck tick. I don’t see many players shelling out 120 bucks for a horde of 1/1s. And if you’re not doing Shadowborn Apostle stuff, you might as well play the other Cleric commander in this set (we’ll get to him soon).

Now here’s a guy with an anger management problem. I hear he even wrote a memoir about it. Here’s a snippet:

As part of my first day at anger management class, I, Moraug, learned the value of patience.

You see, all I wanted was Landfall triggers. But in mono-red, they were so hard to come by. I used Cleansing Wildfire and Geomancer's Gambit on my own lands. I played Evolving Wilds in my mono-colored deck. I even befriended Walking Atlas (a bad influence, that guy).

However, despite all the extra combat spells in mono-red, I realized that I wasn’t surrounding myself with good cards. So instead of leading my own deck, I joined the 99 of commanders like Obuun, Mul Daya Ancestor and Omnath, Locus of Creation. And let me tell ya, that Omnath can really juggle...

Things get off-topic after that. Suffice it to say that Moraug functions better in the 99 than as a commander. Hardcovers of his memoir coming soon to a bookstore near you.

Ashaya, Soul of the Wild

Wherever it's from, Ashaya is super cool. Every creature you cast increases its power, taps for green, and triggers Landfall. Plus, your team gains immunity to popular spells like Anguished Unmaking and Cyclonic Rift.

That’s all impressive—and hard to evaluate, since this is a unique effect. The closest comp is probably Life and Limb, though that appears in just 993 decks.

Weirdness aside, Ashaya has enough backdoor synergies that I'm willing to buy it. And anything even remotely related to Troll 2 gets the benefit of the doubt from me.

Linvala seems like a sweet commander for a Party deck, so I’m unsure why it’s not getting more buzz. Azorius offers a plethora of options for the strategy, such as the following creatures:

Plus, by making your creatures indestructible, Linvala covers Party’s inherent weakness to board wipes.

Unfortunately, I haven’t seen much interest for Linvala, despite how much I like her. Folks must be attending Tazri’s party instead.

More Rogue than Vampire this time around, Anowon is back and probably more popular than ever. It helps that Rogues are a less crowded tribe than Vamps, with the mopey Sygg, River Cutthroat serving as their top commander, and with just 123 decks, that isn’t saying much.

Anowon has plentiful Rogue support, he's the face card on one of the precon decks, and he appears to be quite the accomplished hiker. All points in his favor.

Another Rogue tribal commander appears! Will it surpass Anowon?

For starters, Zareth San, the Trickster ("Tricky Z" to his friends) certainly packs a punch. With many ways for Rogues to go unblocked, one should procure a plethora of opponents’ permanents. And note, that’s permanents, which means planeswalkers, creatures, and even lands. Since Rogues specialize in milling, finding stuff to steal shouldn’t be a problem.

His quasi-Ninjutsu ability, however, doesn’t function from the command zone, which effectively erases what might be the card’s coolest trait. Also, anyone interested in Rogue tribal will likely buy the precon, meaning they'll play Anowon over Zareth.

I first read this as "Thief of Hearts", which put me in mind of the lead singer in a boy band. Zagras, however, belongs not to a band, but a Party.

The dream scenario is casting Zagras for two mana, then alpha-striking some poor schmo and their hapless planeswalkers. Or try Goblin Sharpshootering everyone else's creatures, since your Sharpshooter has free deathtouch.

All fun, but it remains to be seen how easy assembling a full Party will be. Plus, you’re just begging to get your board wiped, and until you assemble a new Party, Zagras will cost a whopping eight mana on second casting. Not letting this guy sing in my band.

This pig looks useful for producing spiky green bacon, but not much else. Tutoring two lands helps with Landfall, but both must be basic, meaning no shock lands. The second ability shuts down fetch lands and Phyrexian mana, but that seems more likely to annoy your friends than bring you happiness.

My prediction: Oink (Which Roughly Translates to "Under")

Nah, just kidding. There’s plenty more to discuss with Phylath (beyond its uncanny resemblance to Groot).

Many have compared it to a nerfed Avenger of Zendikar. And true, you only get Plants for basics. But those plants will grow faster than Petey Piranha once you get some Landfall triggers.

Speaking of which, many want to try 'Plant tribal' with Phylath. I’ve never felt much affinity for Plants (aside from the four-year-old cactus in my office), but I suppose that shouldn’t preclude me from giving this card the grade it deserves.

This guy's one P away from being "Oprah," which bodes well for his popularity (so long as he doesn't unleash a horde of bees on an unsuspecting audience).

Anyhoo, Orah's abilities are great. Just pack a decent curve and some ways to put Clerics in your graveyard. You’ll be happy with this Hierophant (what the heck is a Hierophant, anyway?).

There are also a surprising number of nice Clerics in EDH, such as the following:

Yes, you can get up to some hijinks with Aphetto Alchemist or Fatestitcher. And sure, Kaza's hastiness enables immediate cost-reduction. But she asks you to go wide for best effect, and Wizards aren’t a tribe that does so particularly well (aside from perhaps Docent of Perfection). Plus, we already have stronger options for Wizard tribal in Inalla, Archmage Ritualist (1,760 decks), Azami, Lady of Scrolls (744 decks), and Adeliz, the Cinder Wind (584 decks).

For me, that all means a naza for Kaza.

Despite boasting a refreshingly Orcish-sounding name, Grakmaw likely won't cut it. It's challenging to stack those counters, and you can't rely on the death trigger since Swords to Plowshares, Cyclonic Rift, and Counterspell are three of EDH’s six most-played cards. Those weaknesses, combined with minimal fanfare upon release, make me think Grak will fall short.

Allow me to be the old guy on the couch for a moment: Back in my day, the words "draw" and "card" never appeared on a Boros commander unless we added them with a Sharpie, as a joke. You kids these days—you don’t know how good you have it!

This isn’t the clunky, sorta-card draw Boros used to get, either (I’m looking at you, Munda, Ambush Leader). It’s conditional, yes, but it's effective, especially when attacking multiple opponents. Plus, if you chump attack just for the card, you can use Akiri’s second ability to save your creature.

They say things get better with age, and that’s certainly the case with Akiri.

Not only is this a sweet Kicker commander—it’s also one of the clearest images of the Loch Ness Monster ever taken. Sweet fins, bro!

Verazol's direct competitor is Hallar, the Firefletcher, and I think Verazol's far better. It grants access to insane blue Kicker spells like Rite of Replication and Jace, Mirror Mage. In addition, Verazol's casting cost is worded such that it gets counters from command tax payments. Finally, it’s in Simic, which is arguably the format’s strongest color pair. Say yes to Nessie.

Obuun looks like a Scooby-Doo villain, but it has a sweet Landfall ability. When combined with EDH staples like Oracle of Mul Daya and Harrow, +1/+1 counters will be plentiful. Most often you’ll pile them on Obuun, though cards like Mowu, Loyal Companion can also make use of them.

That's good, but bringing lands to life is better, especially with haste and trample. When animating Darksteel Citadel or Inkmoth Nexus, one can see why this guy became such a renowned ancestor. Oh, and he’s also the other face card for the precon decks.

Omnath is the Magic equivalent of the iPhone; a new model arrives every few years, prompting a buyer's frenzy. For this version, I can see why.

Clearly, Omnath is powerful. It replaces itself on entry and provides a serviceable body. Though the first Landfall trigger is unimpressive (since lifegain means less in a format with commander damage), the second trigger is far better: four free mana to pay for your next ramp spell, which triggers the third, final, and best Landfall ability.

Players probably won't get that third Landfall trigger as often as they think. Even so, Omnath is an iPhone, and people love iPhones.

My prediction: Over (Can't Miss Pick!)

I said this in my last article and I’ll say it again: I’m giving every five-color commander an Over unless I see a good reason not to. Any such reasons with Tazri?

Nope. We’re talking about a five-color commander that costs as low as one white mana and draws up to two cards per activation. One might go pure tribal with Warriors, Wizards, Rogues, Clerics, or Allies, or you can invite them all to the Party. Easy pick here.

Enjoy your stay on Zendikar, EDH players. Until next time!