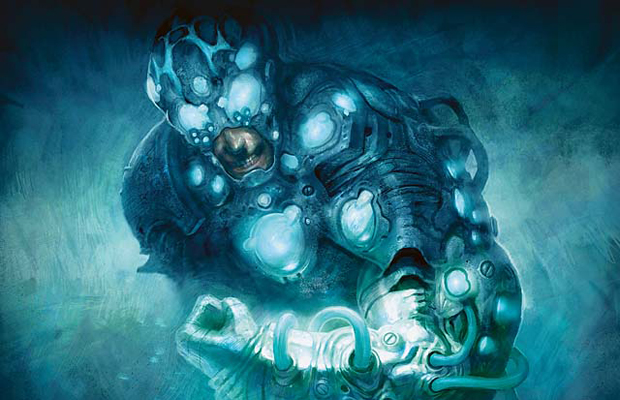 Hello everybody! I hope that you are all having a great day, and I would like to welcome you to the first article in this series, The Toolbox. My name is Elijah, and I am a student looking to go into computer engineering. I started playing Magic just before the release of Battle for Zendikar, specifically the Commander format, and the creativity and ingenuity it offered is where I really cemented my love for the game.

Ever see a card and go “What?! Why aren't more people playing this?!” If you like having this experience, this is the series for you! If not, you should read the article anyway! I clearly have your attention, after all! All kidding aside, let’s get down to business, and no, not to defeat the Huns. To figure out where the card Liquimetal Coating should see way more play!

First off, we have to break it down and see why Liquimetal Coating should be played, and to double check that I’m not writing complete nonsense! Only half nonsense is allowed! Let’s start with the first (and only) ability: it turns target permanent into an artifact until end of turn. How do we benefit off of this?

Looking at the EDHREC page for Liquimetal Coating, we see a lot of artifact-based commanders, a few commanders that sacrifice artifacts, and some that just benefit from destroying thoe metallic playthings. For instance, Sydri, Galvanic Genius , and Karn, Silver Golem want to turn things into artifacts so they can then turn artifacts into creatures for combo shenanigans, or to turn opponents’ lands into 0/0 creatures. Others want to turn things into artifacts to sacrifice them, such as Breya, Etherium Sculptor and Daretti, Scrap Savant. Think about it; wouldn’t you prefer sacrificing an extra land and replay it with Crucible of Worlds rather than sacrifice another useful artifact that you can’t immediately get back? No? You want to sacrifice something useful and get a leaves-the-battlefield trigger? Well fine. But still, having that extra option is excellent versatility.

Moving on, there are some commanders that just want to steamroll their opponents with value, such as Memnarch or Padeem, Consul of Innovation. There are also the oddballs such as Horobi, Death’s Wail, which uses Liquimetal Coating to just straight up destroy a creature, or Vorel of the Hull Clade which can then double the amount of counters on “artifact” planeswalkers! Finally, there is Glissa Sunseeker and Starke of Rath, who just want to be the fun police, but we’re not gonna let that keep us down!

Back to the Stone Age

To get some truly special tech, we have to start with the basis of technology, by going back in time about a hundred million years ago. If you haven’t figured out my heavy-handed foreshadowing, the first commander we’re going to take a look at is the great Zacama, Primal Calamity! I’m not going to go into a lot of detail on what Zacama does because it is really their sixth ability that I want to focus on here. Wait! How did this thing get printed with three great keywords and then four more relevant abilities?! Hold on, I need to do some brewing... Alright, I am back. We already know this big bad Dino can wreck face and she is an absolutely solid pick as a commander, but her last three abilities are somewhat circumstantial. So what happens if your opponent plays a creature that can’t be dealt damage? It essentially bricks our giant Dinosaur into being a giant beat stick! Still not bad, but what if that sixth ability could handle that pesky creature? Liquimetal Coating has you covered! It turns planeswalkers, damage-proof creatures, and even your opponents’ lands into a thing of the past! Liquimetal Coating interacts very little with other cards in the average 99, aside from any other artifact removal that you are running, but the synergy with the commander itself is more than enough to compel me to play it. Below is the Average Zacama Decklist!

Back to the Future

Time to jump forward in time just a little bit to the Kor Soldier, Akiri, Line-Slinger! Looking at Akiri, we see that she wants artifacts on the field, as many as possible. Getting a power increase for each artifact in play lends itself well to a lot of very aggressive artifact strategies, such as Affinity-esque or Equipment-based Voltron decks. While it is not a huge power buff, it can still be relevant, especially with commander damage! There are tons of cards played in Akiri Partner decks that synergize perfectly with having more random artifacts such as The Antiquities War, Cranial Plating, Daretti, Scrap Savant, Goblin Welder... the list goes on! At first, Liquimetal Coating seems like an odd inclusion in an Akiri, deck but it works so well! Without further ado, here is an Average Akiri, Line-Slinger and Silas Renn, Seeker Adept deck!

Oh boy, this guy is an absolute pain. Say hello to Arcum Dagsson. Let us take a journey through his one ability: in layman's terms, you sacrifice an artifact creature to tutor for a noncreature artifact and put it right into play! Just how was this thought to be fair?! FOR FOUR MANA, JUST HOW?! I need to take a breather… Okay, I’m good now. As my little outburst suggests, Arcum Dagsson is an immensely strong commander that deserves the hate *cough* sorry, the respect that he deserves. His one weakness is that there is not a large density of playable artifact creatures. But don’t worry! Liquimetal Coating can turn that useless Trinket Mage into a number of awful noncreature artifacts! If you don’t have any artifact creatures you can also sacrifice Arcum Dagsson himself in a pinch! I do actually really like Arcum as a commander, I have just had some very oppressive games against him, so I like to take my chance and throw a few jabs when possible. I don’t want to bore you with the details, so let’s get right to the decklist!

The man, the myth, the legend, Sai, Master Thopterist! Ok, not really, but he is a pretty intriguing commander. Creating a 1/1 flying Thopter whenever we cast an artifact is a very powerful ability that allows us to grind out a game with a near endless supply of chump blockers, or just fill the skies with an evasive swarm and win that way. His second ability is the thing that we really care about, however. Paying two mana and sacrificing two artifacts to draw a card seems an absolutely absurd cost... but what if we're sacrificing things we could sacrifice more things with no trouble? Can you guess what card I’m gonna suggest? If you guessed Liquimetal Coating, you would be right! If you didn’t, have you even been reading the article so far?! I’m kidding, I’m not offended that you don’t care. Seriously though, Liquimetal Coating would be great in this deck! You can sacrifice extra lands with Sai and then immediately replay them with Crucible of Worlds! I know that Crucible is not in the Average Decklist, but it is too good of an interaction to ignore! As a side note, Crucible of Worlds should be played in this deck even without Liquimetal Coating; the value of being able to use Buried Ruin or Inventor’s Fair multiple times is just insane! Even if you don’t want to sacrifice your own lands, there are so many things that you could sacrifice such as Trinket Mage or Chief Engineer! Man, all this talk of value just makes me want to see the decklist!

No matter what, everything goes back to the dust from whence it came. No one knows this better than the king of the Atogs, Atogatog! To the few Atog players out there, how have you not found this card?! To everyone else, Atogatog wants to do one thing: sacrifice other Atogs to get a boost in power and toughness! But why should the great Atogatog care about a measly artifact that turns other things into artifacts?! Because all Atogs love eating things to get stronger! Sarcatog, Megatog, Lithatog and Atog all sacrifice artifacts! For those that know your underdeveloped Magic tribes, there are a total of 13 non shapeshifter Atogs, including Chronatog Totem. So that means around a quarter of the creatures that we have access to work by sacrificing artifacts, so what happens if that is one of the only creatures we draw? Well we have to turn the other things we draw into artifacts! It all comes full circle now with the decklist!

Liquimetal Coating has been a nice surprise for me, and hopefully it is for you too! It's versatile for many kinds of decks, and is a nice reminder that there's always room for innovation. I hope that everyone has enjoyed the article! If there is a card that no one else seems to play but you think is an absolute powerhouse, I would love to hear about it! Please let me know if there is anything you'd like to see to help change or improve this series. Thank you so much for reading, and have a great rest of your day!