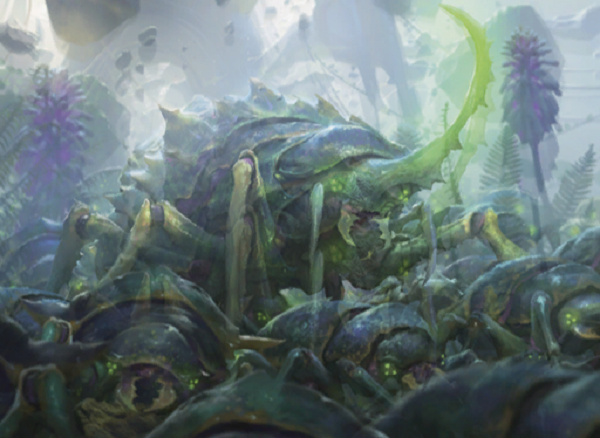 Welcome to Too-Specific Top 10, where if there isn’t a category to rank our pet card at the top of, we’ll just make one up! (Did you know that Aeve, Progenitor Ooze is the only creature with Storm?)

Magic has gone creature-copy-happy of late, and I'm not talking about Clone. For a long time, the idea of copying a permanent felt complicated and unwieldy, but now it's a common sight at the Commander table to see Copy tokens, dry erase tokens, or even post-it notes littered across a player's board.

And why not? With the advent of cards like Volo, Guide to Monsters, Skyclave Relic, and Rionya, Fire Dancer, there's all the fun in the world to be had making copies of your copy's copies (this is why you make the big bucks, copy editor).

However, the mad scientist trope of copying other creatures is played out. What about the creatures that do it all themselves?

Top 10 Creatures That Clone Themselves

Criteria: Creatures that can create several copies of themselves (and not of, say, other creatures). As is tradition, all results are ordered by EDHREC score.

Put simply, this week we want to find all the creatures that can make Biovisionary jealous, and that create copies of themselves. While a lot of mad scientists can do this, they shouldn't really count, as they can target just about anything. What we want are the exact genetic duplicates that spend all their time introducing themselves to themselves.

Nope, even in my example GIF I've gotten it wrong. Well, nothing for it but to just start the list and show instead of telling, huh?

Pack Rat doesn't strictly follow the clone hierarchy, but it's an interesting case, because it's actually the first black creature ever printed that makes a copy of itself, and more importantly, it's also the first creature to copy itself that builds off of the copies. While the honor of first overall copier goes to Sprouting Phytohydra from Dissension, Pack Rat is the first creature that actually cares about the copies of itself. Sure, having multiple Mirror-Sigil Sergeants in Limited was an absolute beating, but that's just because 4/4s with trample are good. Pack Rat starts off weak, but the more mana and cards you throw into it, the more of a problem it becomes for your opponents, and even better, if the original gets removed, the copies can still make copies!

Encore is an exciting mechanic from Commander Legends that fits this week's criteria all on its own, provided you have multiple opponents. In a nutshell, it allows you to exile the card from your graveyard to put a copy into play for each opponent, each of which has to attack this turn. (If you aren't feeling particularly hostile and don't want to attack anyone, this is easy to get around by activating the Encore ability during your second main phase!) Most Encore creatures come with an attack or death trigger, so you can rack up a ton of them, and Elvish Dreadlord is no exception. What is a bit different about it is that the benefit you get when you get three Elvish Dreadlord triggers doesn't particularly stack all that well. Sure, every once in a while you'll snag an Old Gnawbone or an Elesh Norn that you wouldn't have been able to kill otherwise, but for the most part, even just a simple -3/-3 wipes a whole lot off the board.

Of course, this only makes it all the better for Elf decks with black in them, as you don't have to worry about Elvish Dreadlord's effectiveness being lessened that much when a player gets knocked out of the game. At seven mana, it is a late-game effect, after all.

More Encore, only with an attack trigger this time! Let's not mince words, Coastline Marauders permanently retired old EDH staple Terra Ravager, and it was cold-blooded. At one mana cheaper, and with trample to boot, it was already winning the fight before the game-ending Encore ability even got involved. My favorite sequence I've seen with the new and improved version was a Brion Stoutarm deck swinging at the Lands player for near lethal, Flinging the original Coastline Marauders at another player for actual lethal after combat, and then Encoring the whole thing back the next turn to win. The Brion player had somewhere near 110 life by the time they were done, as I recall. That's just good clean fun!

Maybe the most infamous creature for getting out of hand by copying itself is Polyraptor. At eight mana, it's a bit pricey, but with any sort of repetitive damage dealer, like Pestilence or Pyrohemia, you can end up with all the Dinosaurs in the world. If you're just looking to go infinite with it, however, then might I suggest Last Laugh? It might take a little bit to get going, as you do need to get to five death triggers before the first Polyraptor dies, but once you do, it just goes until everyone else is dead, or until you are! Plan accordingly!

If you're looking for a Reanimate deck to get out of hand in the late game, then Rakshasa Debaser is your Cat Demon. Sure, if you play it out normally it's fairly underwhelming at six mana, having you wait a turn to see any kind of results. On the other hand, if you do the true black thing and put it directly into your graveyard in the early game, people are in for a nasty surprise when you hit eight mana.

The six creatures you get from Encoring a Rakshasa Debaser doesn't come close to Phyrexian Triniform, however. For a twelve-mana Encore cost, you get nine creatures by the time things are said and done, not to mention the fact that you got to attack with three 9/9s in the meantime. In short, if you've got a little Timmy/Tammy in you, it's hard to do better than a Phyrexian Triniform, and if you've got a sac outlet with a Blood Artist, the game might just be over.

If you instead prefer to stay a little closer to the ground, Mist-Syndicate Naga has you covered. For three mana during your main phase or your combat phase, you can throw this Ninja out there and have it start making copies of itself with every swing. Even better, the copies can make copies, meaning that if people don't find some blockers soon, you're going to start educating them in various Nintendo generations.

Two, four, eight, sixteen, who's going to buy my next generation machine?

Giant Adephage has the exact same copy ability as Mist-Syndicate Naga, only on a 7/7 body that tramples. It also comes with a seven-mana cost to match that (and no Ninjutsu surprise), so it's not all roses and daffodils. That said, to return to our gaming system metaphor, Mist-Syndicate Naga takes a Super Nintendo's worth of copies to kill a player, but with Giant Adephage, you don't even need an Atari.

One dubiously blue removal spell is good enough, but how about four? Amphin Mutineer provides just that, and it's flexible enough that it can just trade out your 1/1 tokens for 4/3s as well. While it's a bit pricey in either mode for the effect, enter-the-battlefield abilities are notoriously abusable, so it's not too much of a surprise to see this one up at #2.

It's no surprise to see that our #1 overall self-cloner is none other than Scute Swarm. Ludicrous in the Lands decks, and still more than good enough for everything else, Scute Swarm starts making huge numbers if you even look at it sideways. Ignore it for a turn or two, and things will get even worse. Combine all that with some of the best flavor text story around, and there's a lot to love and hate about Scute bugs.

First off, lurking just outside our Top Ten were the Oozes, who I feel like warrant a mention:

I actually built an Aeve, Progenitor Ooze for a CUT! brewing challenge I appeared in back in July, but I was in love with this card the moment it was printed, to the point that I was forcing it and Biowaste Blob into my "Oops, All Creatures" deck on the flimsy excuse that I already had Umori as a Companion. I personally drew the line at Ochre Jelly, though. While it's a ton of fun in the big Hydra or X spells deck, like Rosheen Meanderer, it doesn't honestly do that much unless and until the numbers get huge.

As for the rest, we'd be a bit remiss if we didn't look at the "real" Clones again, wouldn't we?

Top 10 Clones (You know, the ones that copy other creatures)

Getting pretty close to the edge there, Clone!

A ton of Encore this week, which reminded me of an old argument...

Finally, what is your favorite creature that clones itself? Are there any examples we completely missed here?