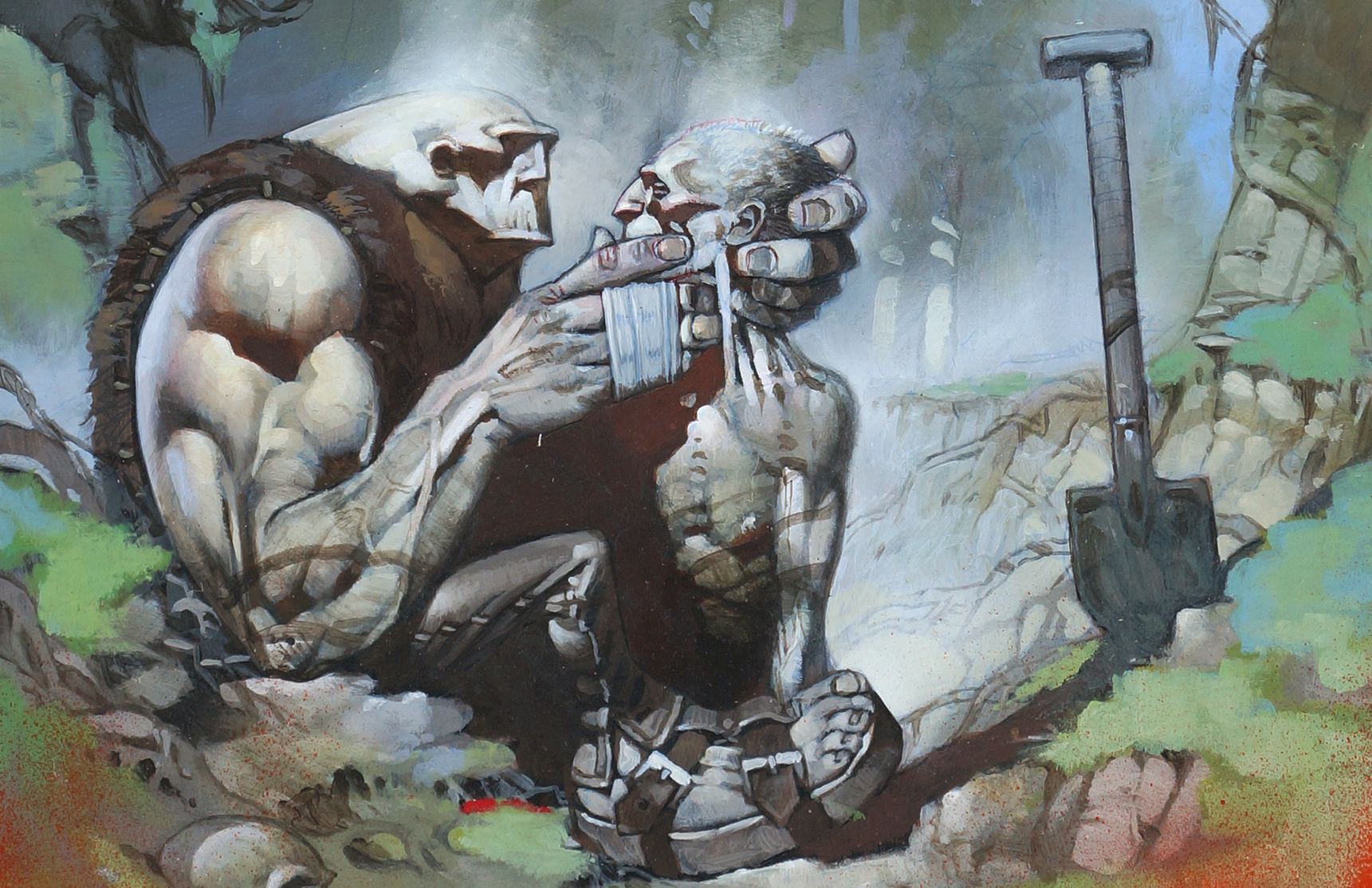 When You Dig My Grave...

Welcome to Too-Specific Top 10, where if there isn’t a category to rank our pet card at the top of, we’ll just make one up! (Did you know that Pit Keeper is the only two-mana "ETB" Gravedigger?)

Innistrad: Crimson Vow brought us a new Gravedigger variant, and it might be the best one ever.

Returning creatures to hand is great, and this one even mills! While Reanimate has a whole strategy named after it, and for good reason, I personally think that all too often we ignore the meager value of returning a creature from your graveyard to your hand. After all, every deck east of the Mississippi is playing Eternal Witness, so surely there's some value in just getting a card back from the graveyard, right?

This got me thinking: what is the current best Gravedigger?

Wait a second - I just praised Eternal Witness for returning things to hand, but does that mean that Eternal Witness is a Gravedigger? We need to define some things here.

The easiest off-the-top-of-my-head definition of a Gravedigger would be "creature that can bring a creature back to hand from the graveyard". The problem is, Eternal Witness fits that definition and doesn't at all feel like a Gravedigger. Even more problematically, Golgari Thug and every Dredge creature also fits that definition, and that doesn't track at all. Then there's Genesis, which just has me drawing a line in the sand.

Sure, it's arbitrary, and entirely based off of my own feelings, but Genesis isn't a Gravedigger. It's barely a creature to begin with, more a card you discard, and the flavor is almost the exact opposite. So, instead of fighting this irrational belief I have, I'm going to lean into it and just ban all nonblack creatures from consideration. I'm also going to add the word "other" to the 'bringing creatures from the graveyard to hand' requirement, and those combined should neatly solve all of our corner cases. Let's take a look at our final criteria, and away we go!

Criteria: Mono-black creatures that can bring other creatures back from your graveyard to your hand without a color, tribal, or timing restriction. As is tradition, all results are ordered by EDHREC score.

You rarely find impressive cards at the very bottom of an overly-specific Top 10, but I must say, Eternal Taskmaster seems particularly bad, especially in comparison to some of the cards it beat out. A combat-conditional recursion ability is underwhelming enough, but the fact that it costs three mana is just... awful. You'll pay five total mana to recur your first creature, it'll take you two turns to do it, and then you'll probably lose your 2/3 to a blocker anyhow. It's just not good, no matter how you look at it.

So instead of droning on about that any longer, let's do some of our Honorable Mentions up front and see if we can't get people to start playing better versions of this effect in their decks.

Right off the bat, Entomber Exarch is a fine addition for decks that care about enter-the-battlefield triggers, like Yarok, the Desecrated, which is one more archetype than I can think of for Eternal Taskmaster. If you're looking for a repeatable effect that cares about combat, however, then Gorex, the Tombshell provides a similar effect with a better body and no activation cost, even if it doesn't technically qualify for this list. But really, why bring combat into it at all? Undertaker used to be a staple of EDH for a reason, and honestly too many people are complicating things rather than just pulling the trigger on this excellent Spellshaper. Finally, if you're just looking for a Gravedigger that doesn't cost four mana, might I suggest Pit Keeper?

I've never actually seen Dutiful Attendant in play, but I was not surprised to see that one of its top commanders was Teysa Karlov. What did surprise me is that she's not the top commander playing this card - that title goes to Shirei, Shizo's Caretaker instead, which immediately made me wonder, "Sure, but why not use Cadaver Imp instead?"

Well, it turns out I was not alone in that thought! Cadaver Imp sees play in 66.78% of Shirei decks, allowing you to endlessly retrieve any creatures that died while your commander wasn't in play. It's worth pointing out that Dutiful Attendant is superior to the Imp in one way: if someone board wipes you, Attendant can immediately put your commander back in your hand, rather than you having to recast it from the command zone.

Still, most days you're going to be more than happy to pay three mana to get a creature back in hand while also having an evasive creature in play, and Cadaver Imp is the only Gravedigger at that low a price point that doesn't come with caveats.

If instead you're looking to pay a bit more, then Soul of Innistrad lets you throw down a 6/6 deathtoucher that can mana sink you into a full hand! Even better, if someone (rather reasonably) removes your 6/6 that lets you repeatedly 'draw' three cards for five mana, you can still do it one more time from the graveyard. What's not to like about that?

Order of Midnight is the exact kind of uncommon you're happy to see in Limited. It provides a solid effect you'll almost always want, tied to a cheap, evasive body. You're not stoked that it can't block, but it's gonna do work for you nonetheless.

I'm not quite sure that I entirely agree that it translates that well to EDH, however. Don't get me wrong, there are times that I will be happy to either pay two mana to Raise Dead or to have a flier I can throw a Sword of Feast and Famine onto, or to do both of those things for four mana total. Thing is, there are a just a lot of times where I feel like I would draw this and just sigh, wishing it was something more impactful. Besides, why not just have both of those things for less mana, in the form of Cadaver Imp? It'll even block for you!

If you really want to talk about nostalgia going to people's heads, then might I present Gravedigger at #5 on this list? It doesn't belong in this position, and yet I'm kinda for it. All too often we're too busy optimizing our decks that we forget to play pet cards that just make us smile, and for a lot of folks who've been playing a long time, Gravedigger is just the sort of nostalgia bomb that will get the corners of your mouth turning up a little.

If you are looking to cut costs a bit, especially if it leans into the theme of your deck, then Grave Scrabbler might be a better choice. While it's prohibitively depressing to cast at full cost for no effect, it does feel pretty darn good to discard it, pay two, and get two bodies out of the deal. Watch out for this card in Anje Falkenrath decks, by the way. It's in 91% of them, and, unlike the vast majority of the Madness cards she just discards to speed-cycle through her deck, Scrabbler's effect is actually relevant and easy to pay for.

Speaking of relevant and easy-to-pay-for effects, Veinwitch Coven became an immediate staple of lifegain decks the second it saw print. That probably would have been true if it had been a 0/1 that would've brought creatures back to your hand anytime you gained life, but the fact that they pushed it to a 3/3 with menace means this thing is all too often both an engine and a relevant combatant. Orzhov and Witherbloom brewers have both been salivating at the sight of it for seven months straight now, and we're not likely to see the end of that Pavlovian display anytime soon.

2. Witch of the Moors

As a precursor to the Witherbloom bump from Strixhaven, we first got Witch of the Moors out of Jumpstart. Unlike Veinwitch Coven, it only triggers once a turn, rather than anytime you gain life, but it more than makes up for it by tacking on a Fleshbag Marauder to the deal, and not charging you the one mana to boot. Even if you just have incidental lifegain in your deck, Witch of the Moors can become a force to be reckoned with, and that's before you even have a look at the 4/4 body that comes with deathtouch tacked on.

Shockingly, the top Gravedigger is just a Gravedigger, with the exact same stats and text. Heck, it even has the same Zombie creature type - it just happens to have all the rest of them, too! Graveshifter is a great Changeling that rightfully sees play in tribal decks the world over. After all, at the end of the day, what deck can't make any use out of a 2/2 body that brings back a creature?

If you scrolled by the text in the #10 while only glancing for pictures (it's okay, we all do it), you might go back and catch the Honorable Mentions I snuck in there. For those that were a bit more thorough, here's some more expansive lists to sink your teeth into.

Top 10 Creatures That Bring Back A Card From the Graveyard

While I do think that true Gravediggers are monoblack, there is no doubt that this ability bleeds quite a bit into Golgari more generally, both with green's ability to bring back any card and Golgari/Witherbloom's obsession with the cycle of life and death.

What about the ones that only deal in creatures?

Am I just showing my Genesis bias, and this should have been the main list all along? Probably!

Overall, looking through this list (and trying to find versions of this effect for my Golgari Aeve build), the main thing that shocked me was just how few Gravedigger effects there were. Since Raise Dead and Gravedigger have been around since the beginning, I figured this would be a mechanic that gets played around with a bit more. Instead, we EDH players seem to have an obsession with Reanimate, while Gravedigger variants stay expensive and rather unimaginative, and I think that's a shame.

Finally, what's your favorite Gravedigger? Do you have any decks where it's more beneficial to be returning creatures to your hand, rather than the battlefield?

Let us know in the comments, and we'll see you at the table. We just have to fish it out of the basement first. And maybe reattach a leg.