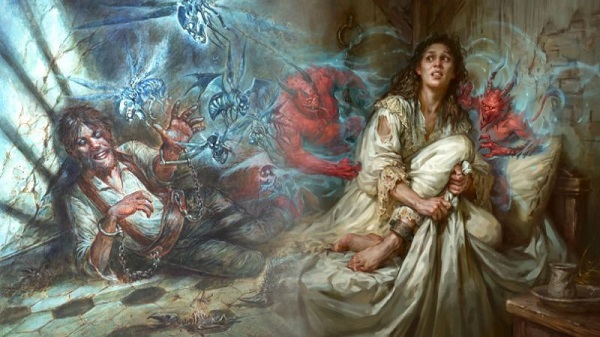 Hellbent Has Gotta be Around Here Somewhere...

Welcome to Too-Specific Top 10, where if there isn’t a category to rank our pet card at the top of, we’ll just make one up! (Did you know that Goblin Lore is the only two-mana card that lets you draw four cards and which has a functional reprint in the form of Control of the Court?)

Every set has that one commander that immediately makes you want to race to your deckbuilding site of choice and start brewing. For me, the Innistrad: Crimson Vow commander that does this is Eruth, Tormented Prophet.

On her face, Eruth is a lot simpler than a lot of the commanders we see these days. She only has the one ability, and doesn't have fourteen keywords stapled to her. That one ability, though? Wow. 'Impulse draw' two cards every time you would draw a card? Absolutely game-breaking.

What I really like about it, though, is that Eruth, Tormented Prophet makes an obscure mechanic from original Ravnica block playable.

Okay, "playable" might be a stretch. But what if we looked at Hellbent in spirit, rather than as a keyword mechanic?

Yeah, that's every passably decent Hellbent-esque card in Izzet colors. Let's build a deck around them!

With Eruth replacing our card draw with impulse draw, it's extremely easy to end up with no cards in hand, yet all of the options in the world. You don't have to discard to Frantic Search if you don't have cards to discard!

With that in mind, why don't we do a deep dive into all the loot and rummage options out there that are usually terrible, but with Eruth and an empty hand, will allow us to "draw" six or eight cards every time we cast them?

Of course, there are a lot of rummage effects out there that don't quite fit the mold of what we're looking for. First and foremost are the creatures that the effects are named for: Merfolk Looter and Rummaging Goblin.

While these are fine loot effects, they're not necessarily what Eruth is looking for in a Spellslinger deck. As such, our first restriction will be to keep things in the instant and sorcery department.

That just leaves the other giant elephant in the room:

Wheels are a fine strategy, and I think that, initially, many people will build a wheels deck with Eruth at the helm. The thing is, Eruth can easily give you access to 14+ cards without giving your opponents any extra options, so while a Wheel of Fortune or a Windfall might seem like a great idea (and probably still are if you're going for the Laboratory Maniac win), Eruth can already do the same thing for less risk and less mana, for instance by "drawing" six cards off of a Brainstorm that "draws" you into a Breakthrough.

As for wheels that track how many cards you have in your hand, like Tolarian Winds and Winds of Change? They're actually terrible in Eruth, as you will often have little to no hand, no matter how you build her. (In the same vein, there are probably going to be a lot of Eruth brews that start off by including every Cathartic Reunion variant, and they are going to quickly find out why that's not a good idea.)

So, to try and weed out the wheels that would top this list, and, to keep things as low to the ground as possible, we're going to only look at rummage and loot cards that cost two mana or less.

Criteria: Instants and sorceries with a mana value of two or less (not counting X spells) that allow you to both draw and discard without having said discard as an additional cost. As is tradition, all results are ordered by EDHREC score.

In truth, I'm surprised to see that any of the "discard a card at random" rummage spells made the list at all, but Flashback does go a long way in a Spellslinger deck. Suffice it to say that while the random drawback will bite you in the butt a time or two, you'll be happy to impulse draw four cards off of this twice in an Eruth deck, and it will feel very on-theme to do so. If you're going all-in on having no cards in hand, then Goblin Lore and Control of the Court may be better options, but in all likelihood, it's a 'why not both' situation.

While we're always a bit dubious about rummage abilities that are technically card disadvantage, Faithless Salvaging makes up for it a bit with a low price tag, instant speed, and getting to see two cards. In a lot of decks, you would be a bit worried about discarding the card you just drew on the second go-round, but if you have Eruth in play, you get to see four cards, and may not even discard any! It's no Breakthrough, but when it comes to sweet deals with this new commander, it is nonetheless a pretty sweet deal.

If instead you're looking to see more cards for the same amount of mana, then Ideas Unbound has got your back. A mainstay of self-mill decks since the inception of EDH, seeing three cards for two mana is a deal you don't usually see in Magic. The best part? Once you draw them, you even get a chance to play them all before being required to discard! It's a pretty great deal if you're in the middle of a Storm turn, or if you're, say, putting the "drawn" cards into exile, where you don't have to worry about discarding them.

Tolarian Winds represents an entire genre of wheel that has you discarding or shuffling your hand to then draw the amount of cards you ditched, and it's a great genre. In fact, let's do a quick top 10 on it:

Top 10 "Ditch Some Cards, Then Draw That Many Cards" Cards

Well, that was fun, and these cards are all great... unless you're playing a Eruth deck, in which case they will all too often say, "Discard zero cards, draw zero cards."

The whole gimmick of Chart a Course is that you can rather easily circumvent its discard clause to allow yourself to draw and keep two cards for two mana. This doesn't make it a no-go in Eruth decks, but the fact is, you can "draw" a lot more cards with other spells if you're willing to abuse some of the steeper discard disadvantages out there.

Burning Inquiry is a mini-wheel, and thus you may be expecting me to rain on its parade the same way I did with Wheel of Fortune. However, given that it's not inherently card advantage, and that it doesn't actually allow for card selection due to its random discard, I actually think this is some great symmetry to abuse for your own purposes in an Eruth deck. While Brainstorm, Breakthrough, and Treasure Cruise are almost certainly going to be better, you're not not going to play a fourth card that will "draw" six cards for a single mana, are you?

Careful Study will only get you four cards for that same one-mana investment, but I doubt anyone is upset about that. If this is good enough for the Reanimator decks, then it's good enough for Eruth.

Wheel of Fate, on the other hand, I've never been sold on. Using Suspend on turn two and then letting the whole table plan around it for the next four turns is fun and all, but that doesn't mean that it's good, does it? All it really does in my experience is get the entire table to dump their hands, or worse, have most of the table dump their hands except for the person who holds a Counterspell and a board wipe. And that's just if it's on turn two. Even more often, this just gets drawn in the mid or late game and never even gets played.

One of the silver bullets that Eruth, Tormented Prophet absolutely wants is flexible removal. If we're operating with little to no cards in hand, then it's going to be difficult to hold up Counterspells in the way that Izzet decks are used to. Instead, if someone else's game-winning spell comes down and requires a response, you'll have to find a way to dig for your instant-speed interaction. Izzet Charm can both be a means to do exactly that, or be the interaction that you need in the first place. All three modes are beyond relevant, so it's a card you're never unhappy to see.

If you're just looking for your bread and butter, however, then Faithless Looting should come as no surprise in the top spot. While there are other cards that can "draw" eight cards with Eruth, and can do it all at once, none will provide this quantity of draws spread out over two turns , especially not at this bottom-of-the-barrel mana cost. Plus, once you get Hellbent, if you don't have a Mindstorm Crown or Monastery Siege in play, Eruth will only provide two cards per turn in your draw step, and if those are both lands, that's a big whiff. If that ever happens, you'll be thanking your lucky stars that you have a Faithless Looting sitting the graveyard to help restart the engine.

Astute readers and skimmers alike may have both noticed that my "Top 10" title this time around cheated a little bit by not lengthening itself past the tweet limit to include the instant, sorcery, and additional cost caveats. Well, here you go! Here's the Top 10 that I bet you were expecting!

In all honesty, Smuggler's Copter and Mask of Memory should have made the decklist. Alas, a brewer's work is never done! Quick, more Top 10 lists before anyone notices!

There were exactly ten of these, so eat your heart out. More importantly, what about the best loot and rummage effects that have no business existing?

Oof, I've never had to both read and understand Chains of Mephistopheles for a Top 10 list before. That's a lot of pressure!

While we may now be in the year of white, it was a long road to fixing red in EDH as well. Historically, one of the main issues with the color red in EDH was a lack of card advantage options. To fill that void, WotC leaned into both impulse draw and rummage effects, perhaps ultimately culminating in Eruth, Tormented Prophet herself. The question is: has it worked?

Finally, what do you think of the brew? How would you build it differently? Do you think a build like this - one that's designed to be at a battlecruiser/mid-power table - is doable, or is Eruth destined to be a scary-table-only kind of commander?

Let us know in the comments, and we'll see you at the table that exists, yet doesn't, because it's actually a floor. But don't worry, we've got plenty of it!