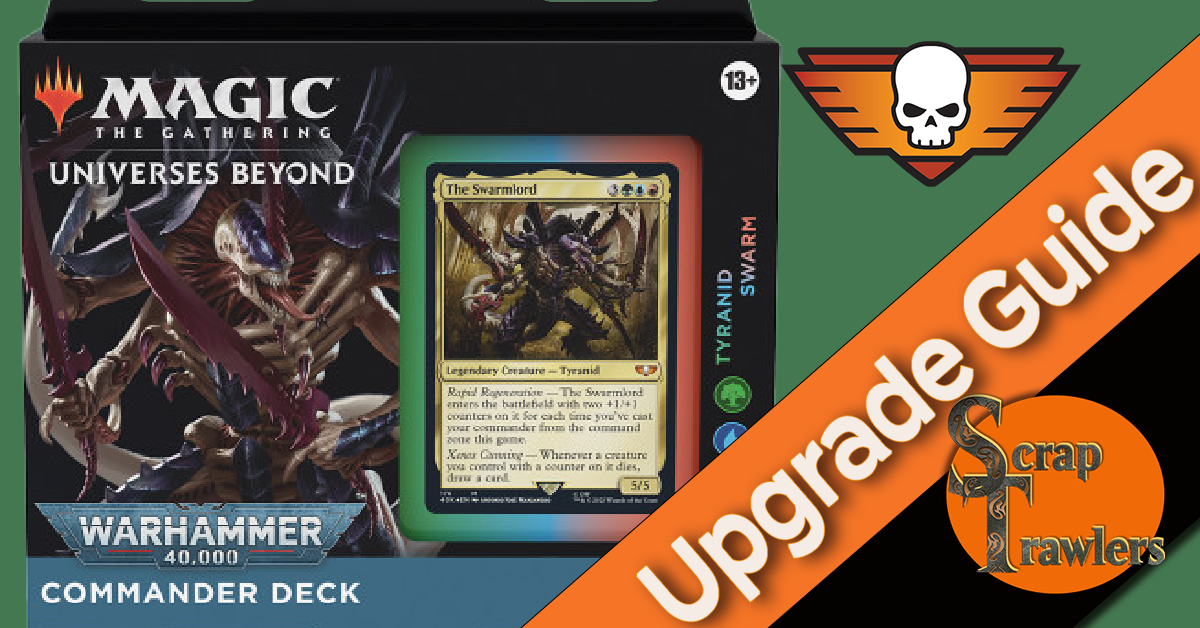 (The Swarmlord | Art by José Manzanedo)

Hello dear reader, and welcome to EDHREC’s Precon Upgrade series! This series has Partner With the Precon Primer series, where we thoroughly review the latest preconstructed decks. I’m Nick from the Scrap Trawlers, where we do EDH on a budget, and I previously reviewed the Tryanid Swarm deck from the Warhammer 40,000 series of Commander decks. If you haven’t read that article, do yourself a favor and check it out here: (LINK). Today, we’re going to evolve this deck by stealing genes and altering our DNA to upgrade the Tyranids into something even more terrifying. As a refresher, here’s the original decklist:

Let's review the head honchos. There are two possible commanders from the stock list: The Swarmlord and Magus Lucea Kane. The Swarmlord is a six mana 5/5 that comes into play with two +1/+1 counters for each time you’ve cast your commander from the zone, and also draws cards whenever a creature you control with a counter dies. Magus Lucea Kane is a four mana 1/1 that puts a +1/+1 counter on a creature at the beginning of combat, and taps to add two colorless to double up any X spell or activated ability.

For the stock list, both commanders are viable options to lead the deck. However, while Magus Lucea Kane can be explosive by doubling your Ravenous creatures, The Swarmlord synergizes more with the +1/+1 counters theme and will help recover from boardwipes with extra cards; which is essential for aggro decks to survive and thrive. So we’ll use the face legend as the commander for this upgrade. Magus Lucea Kane will keep her spot though. She's a fantastic option as the lead of her own deck, almost like the Temur version of Zaxara, the Exemplary. Doubling up a Steelbane Hydra, a Fireball, or Braingeyser sounds rad!

Since we’re choosing The Swarmlord, we’ll focus on additions that enhance the +1/+1 counter theme. In the interest of flavor, the additions will stick to the feel of the Tyranids; using a bit of our imagination of course. Each addition will either replicate the role and function of the cut card, or expand upon it. Lastly, these upgrades will be budget focused, so you can spend less time taking money out of your account, and more time emptying your dice bag for counters. While we are cutting some new Tyranid cards, the additions will only make the remaining cards even stronger.

We’ll start our additions with mana production. The stock list has a whopping 17 sources of mana acceleration, and it needs ALL of it. The Ravenous creatures want at least five mana in the X cost to trigger the card draw, so we want an abundance of mana, and fast. Incubation Druid comes down early and provides one mana on its own. Put a counter on it and now you’ve got a Gilded Lotus on a stick! One of the problems with ramp heavy decks is that when you have enough mana in the late game, any additional ramp become a dead draw. In the case of Incubation Druid, you can either load up counters to make it an efficient beater, or toss it out as a chump blocker.

Up next is card advantage. This is an area of the deck that needs a little boost. While Ravenous creatures can draw cards, there are only 11 of these critters around. Not counting those, there six other card draw spells. This number won’t change, but the additions will have potential to draw more card over the course of the game. Primal Empathy does exactly what the deck wants. It adds counters on creatures when we need them, and draws cards when we don’t. You’ll be hard-pressed to see a bigger creature on the board than The Swarmlord, so this enchantment is more reliable than it appears.

This is THE deck for Shaman of the Great Hunt! Haste makes it easy to drop at any point in the game, and gives you more incentive to declare attacks with the rest of the team. Adding counters to your creatures on combat damage will keep your army large and in-charge. The best part is the Ferocious ability, which will draw you a ton of cards since the Ravenous creatures will ideally come into play with 5 counters. It's also a great mana sink in the late game.

Finally, Change of Plans comes in as flexible card-filtering. It’s an X spell you can copy with Magus Lucea Kane that’ll dig deep through your library, and can add counters to creatures where you need them thanks to Connive. It’s also a nice way to dodge removal by phasing out your creatures.

Speaking of removal, the stock list has 10 removal spells between single target and board wipes, which is a good number for any deck. Some might say this number is on the smaller side, but in my opinion aggro decks should be causing problems instead of solving them. With that being said, having flexible removal means you can cover a wider array of problems with less cards. Quandrix Command is a swiss army knife, dealing with problematic permanents, adding counters to creatures, and a little graveyard removal (or protection) as a treat.

Let's check out the +1/+1 counters theme. There 32 cards that care about counters with plenty of room for improvement, so let's upgrade a few. Forgotten Ancient scales well in multiplayer and grows very quickly. It can spread out the counters to creatures that need them, which will boost the power of some cards, like this next one!

Silkguard is a cheap and effective way to protect your board thanks to the wording on Modified. It’s a super-charged version of Heroic Intervention for your creatures for a fraction of the price, and can add counters when you need to.

Since Modified works well with our theme, we’re also adding Invigorating Hot Spring to give our creatures haste. It also provides counters to creatures, making mana dorks like Biophagus and haymakers like Deathleaper, Terror Weapon much stronger.

One of the easiest ways to increase a deck’s effectiveness is to add more or diversify your win conditions. Since we’re a counters deck, our creatures will usually be larger than the opposition. We just need a way through blockers, so let’s add Overwhelming Encounter. This is an Overrun variant which provides trample and vigilance, and has a high chance of adding counters to each creature. If you ever roll that nat 20, it’ll make for an epic story.

What if we already have tons of counters? Biomass Mutation changes the base power and toughness of our creatures to make the creatures bigger! Want to go even bigger? Pair this with Nexos for absolutely absurd numbers.

I also try to add non-combat win conditions when possible, and this deck is the perfect place for Simic Ascendancy. It’s a lightning rod for removal, and for good reason. "Win The Game" cards are scary, but you should be able to add a few counters with it before it gets taken out. If it sticks around, even better.

That wraps up the additions, so what’s getting cut?

In the same order, we’ll start with mana production. Overgrowth is an OK ramp spell, just not here. It makes a land tap for 3 mana, but you’re stuck with producing GG, which is exactly what you’ll be saying when you can’t produce your other colors.

Onto card advantage, Icon of Ancestry is getting the axe. It’s a great creature family card, but is more effective in colors that can’t draw cards very well, like Boros. With more efficient ways of drawing, we’ll never want to pay three to maybe draw one creature. Abundance is more card selection than card draw, and it’s a great reprint. However, it doesn’t synergize with the +1/+1 counter theme. This was an easy cut for Shaman of the Great Hunt. Explore is a decent cantrip usually seen in Landfall decks. While we always want more mana, if you don’t already have a land in hand or don’t draw one when you cast this, you're not advancing your boardstate.

Here’s the not-so-fun part, we’re finally cutting some Tyranid cards. Oftentimes, upgrading a deck has some pain points where you have to cut theme cards for functionality. Letting go is a part of growth, and like the Tyranids we want to grow. Let’s remove some removal. Acolyte Hybrid is pretty slow. The rock saw is sweet, but having to wait until you attack, and only being able to hit artifacts, and giving your opponent a free card is less sweet.

Cutting some of the counter cards, we’ll start with Bone Sabres. Six mana to put four counters on a single creature is asking a lot. Additionally, we want to go wide with our counters instead of putting them all on a single creature. This is better suited for voltron style decks. We’re also cutting the only vehicle in the deck, Goliath Truck. Having to wait to attack and taking a creature out of combat to crew it is too much for only two counters. Flavorful or not, this car is a junker. Finally, Venomthrope is being released into the wild. It’s a neat little keyword soup card creature . Protection and evasion are nice if you can to add counters to it, but I’d rather put counters on a creature that cares about them like [elHaruspex[/el].

For the final cuts, we’ll remove cards that don’t mesh well with our overall strategy. Our creatures are large and can block efficiently, so Genestealer Locus doesn't add much to our strategy. Giving a small toughness boost to our attacking creatures doesn’t help our aggressive actions enough to warrant a spot. Genestealer Patriarch is very slow for a token producer. It comes down for five and does nothing until it attacks, it has to survive combat, and then the creature has to die in order for you to make a token copy of it. That’s too many hoops to jump through for the payoff. The last card is Ghyrson Starn, Kelermorph. Ghyrson makes for an interesting commander, but he doesn’t do much for us. We want to put counters on all our creatures, even the small 1/1 tokens, so we won’t be triggering his ability too often.

So where did we end up? Let’s take a look!

What if you wanted to push this deck to it's limit? Let's say money was no object. After all, what good is saving money when you're hellbent on galactic domination? Let's make more counters! Doubling Season and Primal Vigor are always welcome in decks that care about both counters and tokens. For even more counters we have Branching Evolution, Kalonian Hydra, The Great Henge and Vorinclex, Monstrous Raider. Green really loves its counters. Blue does, too, with all-stars like Deepglow Skate, Herald of Secret Streams, and Inexorable Tide. Red doesn't have too many, but there are some can't-miss cards like Rhythm of the Wild and Temur Ascendancy for when you gotta go fast!

The Eye of the Swarm

While there's always room for improvement, these small changes will definitely improve how the deck plays. We've expanded the removal, upgraded the +1/+1 counter suite, and added a few more win conditions, all for under $10. That's hard to beat, and you will be too if you make these changes! Are there any budget upgrades we missed? What other themes would you consider for the deck? Do you think Magus Lucea Kane is the better commander? Let me know in the comments, I'd love to hear from you. If you're looking for more Scrap Trawlers content, follow us on Twitter, Youtube, and Twitch! Until next time, dear reader, remember to budget...before you buy it.