Hello, and welcome back to another edition of Ultra Budget Brews, the article series that builds entire Commander decks containing no card that costs more than $1 (commander excluded). It's also the article series that's been doing this for four years, apparently. Things have changed a lot since that first Borborygmos Enraged deck, and I just wanted to take a moment to thank all of you for reading and interacting. Life has definitely had its ups and downs over the past four years, and it's been fun having something I enjoy to pour energy and creativity in to. Thanks for keeping me around.

Last time, I asked you to vote for what you'd like to to see this month, and this is what you all gave me. 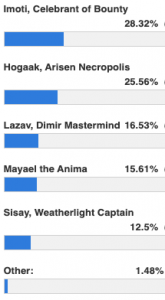 I guess I'll have to save my "Ol' MayaelDonald had a Farm" deck for another time. Alas.

Also, I'm surprised that this is only the second time I'll be writing about an uncommon commander, the first time being just a couple of months ago when Dargo and Keskit had me all hot and bothered. It's almost like Commander Legends has a plethora of fantastic cards to mess around with. Who knew?

The biggest deckbuilding challenge Imoti presents is balancing payoffs (cards with mana value 6 or more) while still having a deck that's able to cast spells before being unceremoniously booted from the game by the aggro player who really wanted that last piece of pizza you just took. Thankfully, as we'll see, our color identity gives us access to the tools necessary to hastily ramp us in to the mid-late game. Let's take a look at our deck!

You might have noticed that there were 101 cards in the deck. This is a mistake that has happened a handful of times on account of some last-minute deck editing on my part, but this time, it's intentional. We're playing a good old-fashioned Companion deck! (Side note: can Companion be considered "old-fashioned"? It came out last year, but that feels like five years ago, so I'm ruling that yes, Companion is, in fact, "old-fashioned")

Our commander is already encouraging us to build with a much higher than normal curve, so why not really lean into that? As anyone in the Midwest/other snowy hellscapes would tell you, if you lose control of your vehicle, the best thing you can do is steer into the skid, and that's precisely what we're aiming for here. So, welcome to the team, Keruga, the Macrosage! May you bring us unending happy Hippo energy and draw us fistfuls of cards.

If you look at the average CMC of our deck, we're sitting at a gargantuan 4.87. Given that, according to the EDHRECast's behind-the-scenes data, the average CMC of EDH decks nowadays is right around 3.1, it's safe to say our deck is simply built differently than most. Honestly, if someone were to approach me and ask me about tips to improve their deck and their average CMC is 4.87, I would look at them in the face, take a deep breath, and treat them respectfully and help out as best as I could. Did you think I was going to say I'd look them in the face and laugh? I'm not a monster, you monsters.

4.87 CMC? Do You Actually Intend to Cast Any Spells Before You Die?

The 4.87 CMC is a bit deceptive. We included a lot of cards that either have alternate casting costs or ways to reduce their cost. For alternate casting costs, we're playing cards with Evoke, Suspend, and Adventure. All of these look much more expensive than they actually are. Beanstalk Giant costs seven mana, but not before we've cast it for just three to help us ramp into our other giant beaters. Search for Tomorrow costs three mana, but we're hoping to Suspend it for just a single pip. Aethersnipe is a six-mana card, but we can cast it for three in a pinch.

Cards with innate ways to reduce their cost are very powerful in general, but even more so in this deck. The best example of this are cards with Delve. Treasure Cruise, Become Immense, and Rite of Undoing will almost never be cast for full price, but any cards that care about CMC/mana value will still read whatever is stated on the card, no matter how much or how little mana was actually paid for it. Into the Story is yet another example. We're almost never casting that for full price, but it will count as a seven-cost spell.

We're also running a number of cards that reduce costs in a more generic way. Kefnet's Monument and Rhonas's Monument make their respective color of creatures cheaper and also give us a small reward for casting them. Thryx, the Sudden Storm has flash and makes many of our spells cheaper and uncounterable. Krosan Drover does something similar, trading uncounterability to instead make our large creatures even cheaper.

Our deck also includes a number of ways to cast spells without paying their mana cost. The simplest way we have of doing this is the bevy of Cascade cards we included in the deck. Annoyed Altisaur probably only makes the cut in more casual Dinosaur decks, but it's a great fit here. Maelstrom Colossus is big and dumb, but it (hopefully) brings another equally big and dumb card along with it. Sweet-Gum Recluse has Flash and Cascade and it makes everything that entered the battlefield bigger. Natural Reclamation is overpriced removal, but has the benefit of Cascading in to something else as well.

We've also included cards to do the basic things that every EDH deck needs to be able to do. We are a bit lighter on removal than I would like, but we've included Meteor Golem, Terastodon, and Scourge of Fleets to give us outs.

Green as access to lots of great ramp cards, and we're playing quite a few of them, including the usual crowd (Cultivate, Circuitous Route, Wood Elves) as well as some cards that don't see as much love (Spring, Search for Tomorrow, Omen of the Hunt). Normally, decks with green don't dip much into artifact ramp, but I decided to here since we had to forgo all of the usual two-mana ramp that we'd normally play. Besides, we need all the ramp we can get.

Release to the Wind

This is an odd card that can be used a number of different ways. The most typical use case for this will to be to use it to save something of ours from removal, recasting it the next time it seems advantageous. This can be used to get another use out of Cascade triggers or enters-the-battlefield triggers. It can even be used as a way to temporarily get rid of pesky nonland permanent under an opponent's control, or to get something back of ours that was stolen. This was bulk until just recently, so get it sooner than later.

A hugely splashy spell, this card's CMC is quite high, which our deck loves. It also allows us to cast cards without paying their mana cost. If we manage to hit three of the types with this card, we'll have gotten our value out of it. It's even ramp in blue! Wizards, why do you insist upon breaking the color pie? Leave green something! Green obviously needs all the help it can get!

This is the most contentious inclusion on this list, as some playgroups will not appreciate what this card does to a game. In this deck, it makes a lot of sense, as we're typically only planning on casting one spell with our actual mana on a turn. Players may not be able to draw cards, but they can still cast cards from their hand, so while it's not what I would call friendly, it's also nowhere near something like Winter Orb or Knowledge Pool.

Players are sleeping on this card because of its high CMC, but its high CMC is what gets it included here. Monarch may be my favorite mechanic of all time because of the effect it has on the game overall. Players don't like attacking to just do damage; they need a carrot, and Monarch provides that. If we manage to hold on to the Monarch, we're rewarded by all of our permanents gaining hexproof. Show your playgroup exactly how powerful this card is.

A longtime favorite of this series, Chaos Wand allows us to freely cast something off the top of a target opponent's library. Will it be useful? Who knows! Will it be fun? Certainly. If we have Imoti out and we happen to hit something that costs six or more, we even get to Cascade! It's value time, y'all.

As always, these are the cards I'd look to add to the deck if I were unconcerned with adhering to a strict budget, wanted to up the power level of the deck, or if I simply had easy access to a copy.

By the time this is published, this may actually be a $1 thanks to its reprinting in Commander 2021, and if it is, get a copy before it goes back up. Like Treasure Cruise, this will almost never cost us the actual 8 in the top-right corner, because Delve's got our back in the good times and the bad, just like it promised in the vows we made to each other during Khans block. It's okay; I'm not here to judge. This is an instant-speed way to pick the best two cards from the top seven of our library. What more could you want?

EVERY BLOODY REASONABLE REPLACEMENT FOR CYCLONIC RIFT COSTS MORE THAN $2 AND OH MY GOD, WHY? I JUST WANT TO PLAY CARDS THAT WON'T EMBARRASS ME IN FRONT OF MY FRIENDS AND NO, GET OUT OF HERE WITH "uh, actually, Whelming Wave is only a few cents." NOBODY WANTS WHELMING WAVE, MURPHY.

Bouncing everything is good. Playing something huge and scary for free is even better. Wizards, if you're reading this, and of course you are, I don't care about fetchlands, I just want Coastal Breach, River's Rebuke and Flood of Tears to be cheap. That's not too much to ask, is it?

P.S. Yes we're playing Whelming Wave in this deck. No, we're not happy about it.

I've written a short haiku to describe my feelings about this card. Ahem:

Truest love is this

If I had to sum this deck's theme up in a sentence, it would be "Play large cards for less than large costs." Ghalta fits right in with that plan. If you've played EDH for long, you've probably had your face turned in to a nice, smooth paste by this thicc dino. Next game night, show up with this and just ranch the person who introduced you to Ghalta with a Ghalta of your own.

The +1/+1 counters are unlikely to matter much in this deck, but a 10/10 for a handful of mana is good, clean Timmy & Tammy fun, and casting this with Imoti out is also good clean Timmy & Tammy fun. Shocking, I know! Think of this as a far, far easier-to-cast Gigantosaurus. If casting Gigantosaurus sounds like a fun time, Primeval Protector will probably get you fired up as well.

What do you think of the deck? Is the average CMC too high? Would you drop Keruga to play more cheap spells? Do you love Cascade? Let me know below. I'll be back with another deck next month, but after that, due to some changes in my personal life, I'll likely be on a bit of a break for a few months, though I'm hoping to get a few things written ahead of time. As always, thanks for reading! Until next time!