Uncommonders - A Bark from War of the Spark! 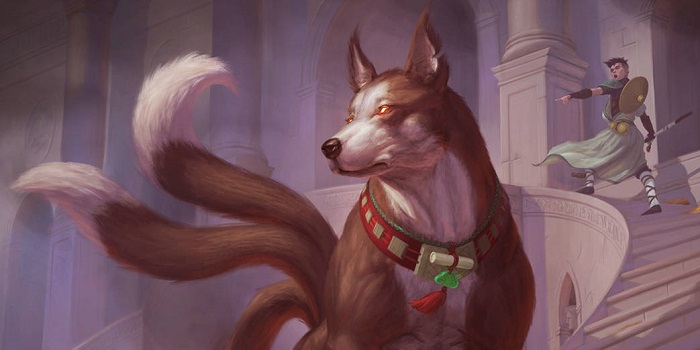 Hello again, beloved readers of the most uncommon Commander article series! Welcome back to Uncommonder, the series that explores the underappreciated commanders printed at the uncommon level. We have been on this here dusty trail for quite some time; Uncommonders has had 16 strong installments so far, and I must admit, I was not expecting this article today, because there was no way I could know that Wizards of the Coast would release even more silver-stamped legends in the upcoming set! If you have been following the War of the Spark preview season, you may already know that today, I am talking about the best good boy in the Multiverse:

When Wizards previewed the stained-glass art renderings of the 36 Planeswalkers that would appear in War of the Spark, people were excited to see art for what would be revealed as Jiang Yanggu, Wildcrafter. Most people assumed this meant we would get another token rendition of Mowu, like we did in the original printing of Jiang Yanggu from the Global Series product. Instead, we got this fantastic uncommon Hound, and he is quite a beefy commander!

Mowu is a four

-mana 3/3 creature in mono-green that wants to get +1/+1 counters for added value. This is something that mono-green can do very well, but that's not even the best part. Having trample on a commander that gets this big means it's a closer all on its own, and having vigilance on that same creature means we'll always have an awesome blocker, too!

As I write this, Mowu is just getting uploaded to sites like DeckStats.net and Scryfall.com, which means EDHREC will not see a wave of data for another week or so.

Because of this, we will not have a page to work off that is solely dedicated to our good boy, but we can use EDHREC’s mono-green page, along with similar commanders like Rishkar, Peema Renegade, as ways to find the sweet synergies. We can also work with the Theme page for +1/+1 counters, provided we are willing to parse through all the other colors to do it. The parsing should not be that hard, considering that most of the cards in the Signature and Top Card sections are mono-green. Whenever I build a deck without the commander having their own EDHREC page, it can be a little complicated. Even using the +1/+1 counter and Rishkar pages isn't very cut-and-dry, because those decks tend to focus on giving counters out across a wide spectrum, whereas Mowu really prefers to get lots of counters just for himself. I decided for the deck, I wanted to focus on making Mowu as big as possible for big damage, hopefully winning early with commander damage. As we continue through the breakdown and get to the list, this is why I did not include cards like Armorcraft Judge. Because Mowu has trample naturally, I also chose to omit both Tuskguard Captain and Trollbred Guardian, common cards for go-wide +1/+1 counter decks. Primal Vigor also did not make the cut because I tend to avoid symmetrical effects, even though in this case we are normally getting much more out of the deal.

Some cards felt like easy includes, though. Hardened Scales and Pir, Imaginative Rascal were the first two adds, since they have similar abilities to Mowu and amplify his growth. Vigor makes an aggressive Mowu even more profitable, and as I realized how many noncreature spells were going to be in the deck, I slotted Primeval Bounty in for more counters. Retreat to Kazandu turns each land we play into two +1/+1 counters for Mowu, and Forgotten Ancient can move the counters from Ancient over to Mowu on each of our upkeeps. I also added Champion of Lambholt because unblockability is even better than trample, and I admit that I would not be against moving counters from Forgotten Ancient onto the Champion in certain situations. Finally, Kalonian Hydra felt like a must-have as well, since getting to double Mowu’s counters (plus an additional one!) can result in some interesting plays.

As stated earlier, green has a plethora of ways to give out +1/+1 counters. Instead of focusing too hard on that, I do want to highlight some of the more interesting support cards that I chose for the deck. As a reminder, “support cards” are the ones that fall into the categories of mana ramp, removal, board wipes, and card advantage. While mono-green excels at ramp and the removal of enchantments and artifacts, they can sometimes struggle with creature removal, card advantage, and especially board wipes. When brewing a deck, I try to keep weaknesses like this in mind so that I can pay special attention to them and fill in the holes as much as possible.

When it comes to card advantage, outside of some color pie bends or breaks like Harmonize, green mostly gets more cards by playing creatures or having big creatures. Guardian Project has been all the rage in green decks, it seems. Beast Whisperer is another way that playing creatures gives us more cards while Elemental Bond works well with Mowu. Rishkar’s Expertise is a no-brainer in a deck with big creatures, while cards like Greater Good and Momentous Fall are great ways to get a full hand if Mowu is targeted with removal or in response to a board wipe.

Creature removal is something that green used to struggle with quite a bit. Outside of Beast Within, very few spells were good enough to slot in most decks. However, a form of removal has been catching on lately for mono-green decks: the fight mechanic. Forcing two creatures to basically smack one another pairs well with having the biggest creature on the field, so if you need to get rid of an enemy’s creature, send Mowu out as the attack dog! Ulvenwald Tracker is a repeatable effect while Pounce works at instant speed, and Ancient Animus can even give Mowu two more power!

We do have to remember to protect our pup as well. I love Asceticism for mono-green decks. I opted for Swiftfoot Boots over Lightning Greaves because some of the spells that give Mowu some counters require the ability to target him. Prowling Serpopard keeps the blue player at the table from countering Mowu, while Surrak, the Hunt Caller will make Mowu run fast by giving him haste. Despite what I said earlier about Armorcraft Judge, I did opt to run Inspiring Call to keep Mowu around in the face of a board wipe, while also running Heroic Intervention for the same reason.

One of the final cards I wanted to talk about that found a spot in the deck was from War of the Spark. As I write this, all the cards from the set haven’t been fully revealed yet, so there may be more that would fit into the deck, but for now Vivien, Champion of the Wilds caught my eye as an upgraded version of Yeva, Nature’s Herald. The +1 ability is only half as good with Mowu, since vigilance comes to him naturally, but giving him reach will help him leap up to snatch Birds and Sphinxes and Angels and Dragons out of the sky. The minus ability is also good for filtering through our deck, or casting creatures for some of the creature-based-draw we are running in the deck.

Put it all together and put a pretty collar on it, and I think the average Mowu deck will look something like this:

Wizards of the Coast continues to both surprise and impress me. Not only do they find ways to completely redesign cards like the planeswalkers in War of the Spark, but in the same set they find ways to give us quite a few interesting legendary creatures as well! They even throw me a bone (haha!) with an uncommon commander as cool as Mowu! It is cool to see how well the game has been coming along the past few years.

Speaking of the past, my favorite comment from last week’s Sosuke, Son of Seshiro article was on /r/EDH and by /u/tsubasaxiii who wrote;

As a kid I ran a mono green snake deck. My pet cards were the son and daughter of seshiro and I dreamed of acquiring their father.
Now that I'm an edh player I've bought him and keep the three bindered up together among other snake tribal and themed cards.... Why I haven't built them yet idk. I just feel so nostalgic flipping the pages of my binder and seeing them together.

This is one of the best parts about Commander as a format - collecting your favorite cards and musing over them even when they are not in decks! Every time I see my Marchesa, the Black Rose, I remember the Grixis Vampires deck I made with my best friend John. We worked on the deck together and my love for Vampires, mixed with his good deck building in Izzet colors made a very fun experience! Mowu is like that, too. Wizards knew what they were doing when they gave us another legendary pup! Mowu now gets to join his pal Isamaru, Hound of Konda!

(Here's hoping they print Isamaru at uncommon in a future set, so I can write about that good boy too!)

If you want to help me figure out which Uncommonder to write about next, follow me on Twitter to vote in the poll, and join the Praetor Magic Discord server to help me decide that poll's options. If you enjoy my crazy takes on Commander, check out the Praetor Magic YouTube channel and Twitch stream every Monday and Thursday at 9 PM EST!

Until next time, keep dropping those bombs (and good doggos)!