Uncommonders - Let's Kick it While I Hallar at Ya! 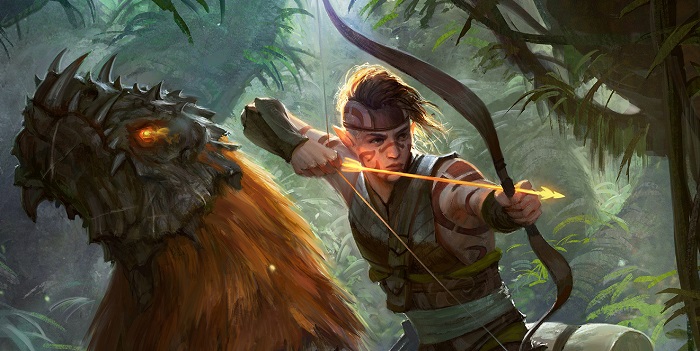 Wow, how time flies when you are having fun! Hello again, lovely readers, it is I, the one they call DM! This is another installment of the Uncommonders series, inspired by the twenty new legendary creatures printed in the beloved set that was Dominaria, which, if you can believe it, came out nearly a year ago (the set is one year old at the end of April)! We've been churning through those twenty new uncommon legends, plus a big portion of other uncommon commanders from other sets, and even those that have been downgraded from mythic rare or rare to a silver set symbol.

Almost every week, I ask the community over on the Praetor Magic Discord to give me some options for the next Uncommonders article, then post those options on Twitter as a poll. I started this same process for this article and then noticed something that has been happening since, well, almost the beginning of this series!

There has been one Dominarian Uncommonder folks have constantly asked for in the polls. but always fell just shy of winning. Out of respect for how beloved this card seems to be, I have forgone the Twitter poll and decided to use some executive power as the writer and settled on the one, the only, the beloved:

There are so many interesting things about Hallar. I could spend the rest of this article just talking about their lore and what they mean as a matter of representation in the game. I could gush over the concept of printing new cards that give a whole new purpose to an old mechanic like Kicker. There's so much surrounding this card, it is easy to forget that we want to take Hallar and brew a deck around them with the data that you, the brewers and deck builders of the world, helped EDHREC consolidate. But I shall not forget that, because it's exactly what we're here to do! Let's dive right in.

As mentioned above, Hallar gives a new purpose for an old mechanic, Kicker, by growing more powerful and dealing damage whenever you cast a kicked spell. You could cast a series of kicked spells to slowly ping the table, but that sounds pretty time-consuming. For the most part, I think Hallar wants to suit up with a big bunch of +1/+1 counters and then pop a couple of Kicker spells for massive damage. Alternatively, they may just need to get big enough for a Grafted Exoskeleton to wipe the entire table out with Infect. There are many options available to us, so let's look at some specific spells for Hallar.

Kickin’ it into Overdrive!

When building Hallar, I think most folks will try to cram their deck with as many Kicker cards as possible. However, this will likely make them struggle, since the mechanic can be very mana-intensive and individual Kicker cards do not always synergize with each other. We do not want to be in that camp, so the first thing we need to do is identify the best Kicker spells available to us.

If you go to our friends over at Scryfall.com and search for red and green Kicker cards, then use the EDHREC Rank sorting function, you may notice that some of these cards have little to do with Hallar's most optimal strategy, and they're a bit all over the place. Some are burn spells, some are land fetchers, some token makers, and some of them also just cost too much to kick without enough payoff! Saproling Migration, for example, could work with a possible token subtheme, but six mana for four tokens does not seem like a great return. By contrast, Vines of Vastwood is instant speed protection for Hallar that can also buff them as a blocker or attacker, and it's a cheap way to trigger Hallar after we've given them tons of +1/+1 counters.

I tossed in Grow from the Ashes, Primal Growth, and the classic Everflowing Chalice as ramp cards. Joraga Warcaller is a nice buff, since Hallar is also an Elf. For removal, Mold Shambler, Verduran Emissary and Goblin Ruinblaster are relatively cheap and effective, as is Overload, which can target many of the scariest artifacts in Commander. (I'm looking at you, Paradox Engine, Panharmonicon, and The Chain Veil. Get off the battlefield!)

Just for kicks (get it?), I also threw in Territorial Allosaurus, since a 5/5 Dinosaur for four mana isn't all that terrible on its own, and when kicked, can take down many creatures in an epic Jurassic brawl. Finally, Molten Disaster is a potential end-game wincon, since the one extra mana for Kicker makes it impossible to counter, and Hallar should be dealing lots of damage to our enemies all game.

NOTE: If you are interested in running Hallar, consider your meta and think about Ghitu Chronicler as well. For six mana, you get a blocker and a chance to bring back a crazy spell. I chose not to include it, but if you run many instants and sorceries, this might be a sleeper hit in your deck!

Even if we never draw a Kicker spell, we can still make Hallar huge and trample over our opponents. Cards like Loyal Guardian, Rishkar, Peema Renegade, Forgotten Ancient, Immaculate Magistrate, Vigor, and Retreat to Kazandu will all get Hallar countered up. Primeval Bounty gets a little crazy in just about any deck, but especially when each noncreature spell makes Hallar huge. For help from some otherworldly friends, Nissa, Voice of Zendikar and Vivien of the Arkbow seem like great options as well.

We also want ways to accelerate our counters, so Hardened Scales, Pir, Imaginative Rascal, and (if you happen to have one) Doubling Season cannot go wrong in a deck that cares about counters or tokens. Solidarity of Heroes can be a game-ending spell, and even allows us to be tricky, since we can cast it in response to a Kicker spell or just after blockers are assigned to double Hallar's counters and therefore their damage, sneaking in a lethal blow.

Ring of Kalonia is suggested on Hallar's EDHREC page, since it continually gives Hallar more counters, but I think it is a waste to give trample to a creature who already has it. Ring of Valkas, on the other hand, gives us haste, so we can deal damage much faster. Some of our abilities and spells need to be able to target Hallar to work properly, so I think hexproof is better than shroud here. Thus, I opted for Swiftfoot Boots instead of Lightning Greaves. I also think this is a great deck for Rhythm of the Wild, giving our commander haste when they need it or starting them off with a counter when it's time to start building up their power!

Fletching out the Rest

I will not bore you with every single other card in the deck, but I know you know we still need to run our normal support package. Ramp, card draw, and removal are all massively important in any deck, and this is no exception.

I do want to mention that just because we named Grow from the Ashes, Primal Growth, and Everflowing Chalice before as ramp cards, there is no reason not to stick to the classics like Sol Ring, Cultivate, and Kodama’s Reach. The same goes for removal, so we're sure to feature Beast Within, Krosan Grip, etc.

For card draw, we are in Gruul, so creature-based card advantage is easy to find! I've included several in the deck, but want to give special mention to two newer cards, Beast Whisperer and Guardian Project, which work great with Hallar's support system of aggressive, token-making, counter-gathering, and just all-around awesome army of creatures.

NOTE: If you do the math, the average converted mana cost (CMC) in this deck is only 3.21. Some people will say that 38 lands in a deck with an average CMC of 3.21 is too many, but remember that Kicker isn't factored into that CMC calculation. Ideally, Grow from the Ashes, for example, doesn't cost us three mana, but five! That is nearly double the cost, which is why I chose to run so many lands.

Phew. I will not lie, Hallar gets me hyped up. The deck can take off out of nowhere in the mid-game, and very quickly leaves everyone a whirlwind of “What just happened? How did we get here? How did it come to this?” I've played against about a dozen Hallar decks since their release, and I have to say, they always have a huge effect on the life totals of the game, even if they only kick a spell or two. Games that feature such huge chunks of damage are massively fun.

Speaking of huge chunks of damage, my favorite comment on last week’s article came from /u/therift289, who wrote on Reddit:

Decks like /u/therift289’s Sachi brew, the Hallar concoction above, and even my personal Krenko, Mob Boss list are probably the most fun for me. Everyone tunnels into their strategy and focuses on how quickly they can pull it off. Control decks can be fun too, but my heart beats for the aggressive nature of a fast deck. I think it helps illustrate how diverse and crazy Commander can be as a format. Sure, there are slow, janky, battlecruiser decks, but there are combo decks, control decks, chaos decks (ew!) and so many more, and it all comes together to form one huge, crazy community.

That is what I love about Commander, which of course is why I would love to talk to you more about it! You can do that by following me on Twitter, joining the Praetor Magic Discord server or joining me a few times every week on the Praetor Magic Twitch stream! We also have a YouTube channel, Facebook page and even an Instagram, if that is your jam!

Keep playing those bombs! Thanks for reading!