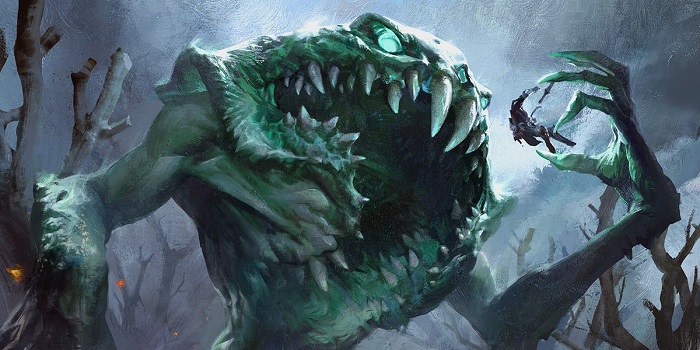 My Milkshake Brings All the Boys to the Yargle

Once again it is time for the most uncommon of Commander article series! My name is Seth Cross, but friends like you can call me “DM”! Welcome back to Uncommonders, the series that explores underappreciated commanders printed at the uncommon level. Last time, we got to talk about a War of the Spark Uncommonder, Mowu, Loyal Companion. The mono-green good boy was the only uncommon legendary creature of the set, so now we are free to get back to grinding through the Dominaria Uncommonders, as well as the Uncommonders of Magic’s past.

I looked back at the series and noticed an interesting fact about the last few articles. Before Mowu, we talked about Sosuke, and his sister Sachi, and then Hallar as well. That means we have had an entire two months’ worth of green commanders! I wanted to break that mold with this article. There’s still a plethora of Dominaria commanders to choose from, but I have had my leery eye on one in particular. This one struck the meme nerve during Dominaria’s release. That’s right, I’m talking about…

He is big, he is mono-black, and… well, that’s about it. Yargle got popular mostly because of his name, and how ridiculous it was to have a 9/3 in the command zone for five mana, but the reality is that having no abilities does not make him complex to build around. His high power does give him one bonus, though: ramp up, hit fast, and try to Voltron people out of the game. Yargle’s 9 power also makes a great target for some Infect closers, since Tainted Strike and Grafted Exoskeleton turn him from a 3-hit killer to a one-shot-and-you’re-dead cannon.

But what to do with the rest of the deck? Looking at Yargle’s Signature Cards on EDHREC, it looks like people are building with that Voltron strategy in mind, which has led to the inclusion of a lot of Equipment, such as Loxodon Warhammer and Whispersilk Cloak. If you know me, you know this is the kind of thing that gets me very excited – not because of the Voltron, but because of all the artifacts! I love to work things like Marionette Master into as many decks as possible, so I decided to support Yargle with a kind of “big mana and artifacts” theme on top of the Voltron idea. That also allowed me to use some big mana finishers that are popular in mono-black, like Exsanguinate and my personal least-liked card in all of Magic: the Gathering, Torment of Hailfire. I don’t like them personally, but you can’t deny the power level here. The first and simplest plan for the deck is to make Yargle capable of giving our opponents the “biggest boop” ever: that one-shot knock out. This is accomplished by either giving him enough power to deal 21 commander damage in one attack, or by giving him Infect and enough power to inflict 10 poison counters.

Blackblade Reforged is a great way to accomplish the commander damage part, as well as Strata Scythe. I like Ring of Xathrid for the incremental boost but also the protection of regeneration. Another form of protection, in conjunction with the staple Swiftfoot Boots would be Darksteel Plate. Since we have already named six important Equipment cards thus far, Hammer of Nazahn also seems like a great idea to circumvent Equip costs and it provides more boop and protection for Yargle. We also should not forget great cards for mono-black, like Lashwrithe or cards that do well with many artifacts in play, like Cranial Plating. These also bring some strategy to our combat step by giving us the ability to move them with their activated abilities, something that normally does not happen in the middle of combat.

Many of our cards are going to boost Yargle by at least one point of power, so Phyresis is decent for the poisonous path. Since we are working with Equipments as well, Skithiryx, the Blight Dragon can be an alternative way to kill someone, especially effective with the big mana giving us the means to give Skittles haste. Finally, I have been seeing Glistening Oil do a decent amount of work in some games, due mostly to the fact that it can be hard to permanently get rid of if the table is not prepared for it.

Marionette Master is a really delightful extra win condition, and having some other shenanigans with artifacts only makes sense. The two biggest ways to get multiple artifacts that can head to the graveyard quickly are Pitiless Plunderer and Revel in Riches. These two make board wipes very interesting, as they can generate an unexpected amount of mana very quickly.

Another way to have artifacts go to the graveyard, especially in mono-black, is to sacrifice them. The first thing that comes to mind is to have artifact creatures that provide value for entering or leaving the battlefield, like Myr Battlesphere, Junk Diver, or Myr Retriever, and coupling them with sacrifice outlets like either Ashnod’s Altar or Phyrexian Altar. Because we are working with artifacts, the former Modern staple Krark-Clan Ironworks can do well in a deck with cards like Ichor Wellspring and Mycosynth Wellspring. God-Eternal Bontu, a recent addition to the game thanks to War of the Spark, will also be a great way to sacrifice our artifacts, and Reprocess can add both redundancy and OG flair to our deck.

Never forget to recur your artifacts! Staples like Trading Post and Scrap Trawler can do this very well, while Conqueror’s Galleon is thematically great for the deck, while maybe not the most cost effective.

Artifacts also assist the idea of our “big mana” theme as well. Caged Sun, Gauntlet of Power and Extraplanar Lens come to mind easily. I think running Crypt Ghast is also fine here, despite not being an artifact itself. Doubling Cube can make for explosive turns. I also like the idea of having Liliana of the Dark Realms just to ensure we hit our land drops every turn.

Because we are running so much artifact recursion and want to run big mana, I like the idea of Expedition Map to get our special lands. Namely, those are Urborg, Tomb of Yawgmoth, Cabal Coffers, and Cabal Stronghold. I considered Nykthos, Shrine to Nyx because we are running a mono-colored deck, but because so many of our cards are colorless, I was concerned that we would not have enough devotion to make it worthwhile often enough. Still, if you run this deck or a variant, use your best judgment and feel free to let me know in the comments what your experience is like!

Speaking of the list, we should frog hop it up with some traditional single-target removal, Wraths, and card advantage spells. Mix it together, and it might look something like this:

When Dominaria came out and Yargle was previewed, I must admit, my first thought was to find some kind of excuse not to write an article about Yargle; in my honest opinion, he felt like more of a meme commander than anything. However, this deck was surprisingly more interesting than I could have ever guessed. A thing I personally always preach in deckbuilding is to make sure your deck can function well even without your commander in case they’re removed. Adding in the artifact-matters twist made this an especially rewarding journey. I enjoyed the result, and hope you do too!

As always, I like to bring up interesting comments from the last article, which in this instance was about Mowu, Loyal Companion. This time, it’s from reader /u/thearchersbowsbroke from the /r/EDH subreddit, who stated:

Nissa, Who Shakes the World seems like a shoo-in here.

I agree! Sadly, Nissa had not been previewed during the writing of the article. I may revisit Mowu down the road, now that War of the Spark is getting released this very weekend, to brush up the list with some new tech. In fact, with all these powerful new cards, it might be fun to revisit several old articles, to see how the times have changed those commanders! If that sounds interesting to you, make sure you let me know in the comments below!

That wraps up another fun Uncommonders article! I hope you enjoyed it. If you did, make sure you follow me on Twitter for more of my Magic ramblings, or join the public Praetor Magic Discord server. I also stream a few times each week, so you can follow the Praetor Magic Twitch channel or subscribe to our YouTube channel for some of our other video content. Until next time, you know what to do!