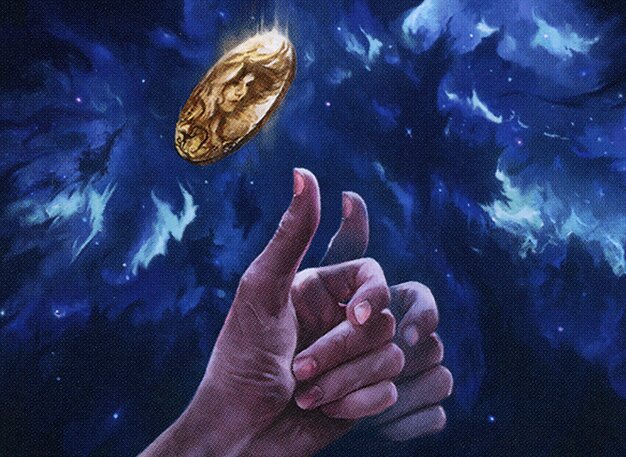 Chaos is a Friend of Mine

EDH decks are often described as falling along a continuum between consistent/competitive decks and swingy/casual decks, but I'd like to argue that - at least in theory - 'competitive' doesn't have to mean 'consistent'.

I'll use a simulation of a simple game that's not Magic, but is hopefully similar enough to Magic to be relevant. This is a four-player game, in which each player has a 99-card deck, and each card has some numeric value.

At the beginning of each game, players shuffle their decks, and play proceeds by each player, in order, taking a card off the top of their face-down deck and playing it. They score Victory Points equal to the value printed on the card, and the first player to accumulate 100 Victory Points wins.

Now, obviously, this game is different from Magic in many obvious and important ways, but it's similar enough, I assert, to make this a useful exercise. Every Magic deck has cards of greater or lesser quality, and to a large extent, the player who plays the most high-quality cards at the highest rate is most likely to win.

The players roll for turn order, shuffle up, and start playing. I'll spare you the details, but it turns out that Ashiok won this first game. They all had so much fun playing that they shuffle up again, and play 99,999 more games. At the end of this series, the final tally is:

Ashiok narrowly edges out the other three, but each player wins very close to one-quarter of the games.

Okay, I know this is all so rudimentary as to be insulting, but I want to set a baseline.

Now consider the same exact scenario, except that Chandra wants to try a new, higher-variance, deck. All of her cards are similar to the cards in everyone else's deck, except they have rules text like:

Everyone sits down to play another series, and everyone but Chandra plays their original decks. Bolas is inwardly smirking because Chandra has brought a J*nny/T*mmy deck to a table full of Spikes.

In their first game with the new deck, Bolas feels vindicated, as Chandra starts the game with a long string of 0s, causing her to finish a distant last when Ashiok reaches 100 first.

But then the foursome shuffles up and plays another 99,999 games. At the end of the series, Bolas doesn't feel so smug, as the final tally is:

Bolas demands a rematch - or, rather, 100,000 more rematches. The results this time are even more unbalanced in favor of Chandra:

This time, they also notice that the games Chandra wins tend to end earlier than the other players' wins. Now Bolas is starting to feel a tiny bit of self-doubt. He asks Chandra if she would be willing to play Standard. Standard is the same as the basic game, except it's between just two players. Bolas insists that he gets to play the deck he has been playing, while Chandra plays her swingier deck.

They play another 1,000 games head-to-head, and Bolas wins the narrow majority of the games: 503 to 497. Bolas feels vindicated; he's "still got it," and he quits while he's on top.

Chandra is sensitive to Bolas's feelings, so she opts to wait until later to tell him the thing she knew 201,000 games ago: in a four-player game, the odds are stacked against you. In a contest between similarly powerful decks, you're likely to lose about 75% of the time. Of course, with a high-variance deck, you're a little more likely to either Win Big or Lose Big, but it's not like you get more points for a narrow loss than a big loss, so swinging for the fences can really pay off!

The following week, this intrepid quartet is at their LGS, eager to play several hundred-thousand more rounds of their simple game. Then, another customer, Meldon Shenery, stops by their table and teaches them about a game called Magic, with a multiplayer format called EDH. They take to it immediately, as it's an incredibly fun way to exercise your mind while enjoying time with friends.

Now reader, I want you to know that this article has been in-process for awhile. I wrote this entire article, including the simulations, prior to Ken Baumann winning the Tier1Con playing Krark / Sakashima. In fact, I wrote this after the same player finished the Major League Commander "regular season" with a record of 1-7-2. Such is the nature of variance. However, I do honestly believe that the multiplayer nature of Commander, and the fact that you can't "lose worse", does reward a high-variance strategy, as the simulations above indicate.

What commanders and cards lend themselves to such strategies? Well, the obvious ones are those that favor explicitly random patterns, such as:

Coin-flipping commanders, most of which are in Izzet colors:

Dice-rolling commanders are similarly centered in red, though they're generally less popular. Reasonable options include:

There are a good number of cards for the 99 that either reward dice-rolling or let you manipulate outcomes. I like Barbarian Class, Netherese Puzzle-Ward, Vexing Puzzlebox, Critical Hit, Brazen Dwarf, Pixie Guide, and Feywild Trickster.

There are at least two downsides to this genre of deck:

With that in mind, my preferred ways to increase variance rely more on the inherent randomness of a shuffled Magic deck. In general, this leads me toward strategies that let me play cards from the top of my library for free, like Neera, Wild Mage and Yidris, Maelstrom Wielder.

You're in Simic, so ramp and card draw - the two pillars of EDH - come easily, and Imoti really wants you to pack your deck full of expensive cards, which are the most fun to Cascade off of. My preference is to lean even harder in the high variance direction by Companioning Keruga, the Macrosage.

What this means is that my deck does almost nothing for the first two turns, and then most likely just plays ramp on turn three. On turn four, you should be able to cast Imoti, then start Cascading giant monsters and splashy bombs on turn five. After a couple turns of (hopefully) lucky Cascade flips, refill your hand by playing Keruga.

This deck has a very high probability of failing! You start the game behind and have a bizarre curve, but when it Does The Thing, it really takes off, and when you lose, you lose pretty quickly and you've probably had a lot of fun doing it.

Here is one possible decklist. Note that I also kicked up the novelty factor by making this one Hapax!

Here is the decklist at Archidekt, if you prefer to see it that way. Check out that mana "curve"!

Let me hear them! Is Ashiok and Chandra's card-flipping game too simple to teach us anything about Commander? Did I make a fundamental error in my simulations? Am I just wrong? Or do you agree that variance can be both win-maximizing and fun-maximizing? As always, if you aren’t already, please follow me on Twitter.