Power Sink - Assassins of the Deep 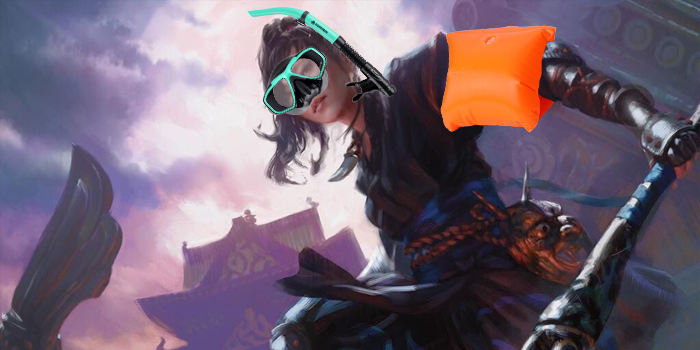 With quill to paper

Stones in the ocean.

For the less poetically inclined, this is Power Sink, the article series where we dull the blade on the sharpest commanders in the format. This time we're covering Yuriko, the Tiger's Shadow, who unfortunately has eight syllables in her name.

Yuriko darted out of the shadows and into the Commander scene with the release of Commander 2018. She was adopted very quickly, as many of us were all too happy to live out the dreams of our eight-year-old selves by playing Ninjas in Commander. Currently, she's the #1 Dimir commander and #4 overall commander on EDHREC, with 6,093 decks to her name. While it's innocent fun to just play Ninja tribal and turn cardboard sideways as you remember whichever ninja-based show you grew up with (mine was Teenage Mutant Ninja Turtles, back in 1987), this commander has a darker side. (A stealth assassin having a dark side? Shocking!)

First of all, Yuriko is extremely difficult to keep off the field with her Commander Ninjutsu ability, which commander tax doesn't apply to. Her ability to reveal cards off the top of the library when a Ninja hits a player, and to drain opponents based on that card's mana value, can quickly end games, especially since she's in the best colors for manipulating the top of your library. Finally, Yuriko gets to put the cards revealed into her hand, which means she's card advantage in the command zone. We can see in the average deck how this is usually done:

Yuriko's typical deck is supported by small evasive creatures, like Tormented Soul and Ornithopter. These make it easy for her to get through and, should she be removed, get back on the field with Commander Ninjutsu. Changeling Outcast and Mothdust Changeling are evasive creatures that also happen to count as Ninjas for Yuriko's ability. Arcane Adaptation and Maskwood Nexus even turn every creature into a Ninja.

Once the Ninjas deal combat damage, there are several high-MV cards to hit off her ability, cards which are also useful on their own. Dig Through Time and Treasure Cruise are great card draw effects that can be cast on the cheap thanks to their Delve ability. Consign // Oblivion and Commit // Memory can be used as removal and, since, they are split cards, their MV is the sum of the cost on both cards, so that's a huge drain for the table. The worst offenders in this list are the extra turn spells, which tend to have high costs (11 MV for Temporal Trespass) and give the Yuriko player another combat, and therefore more damage. Tutors like Vampiric Tutor, Mystical Tutor, and Scheming Symmetry can make sure those high-cost cards find their way to the top, while Lim-Dûl's Vault can potentially set up a deadly top 5 cards. It's scary how quickly Yuriko can drop life totals.

So, how do we give this commander a proper Power Sink?

The essence of casual

The sea monster deck has been a long-standing archetype in battlecruiser Commander. There are 1,223 decks on EHDREC with a sea creatures theme. Most of them are Simic or mono-blue, but the recently-printed Runo Stromkirk has players brewing this archetype in Dimir now, too. This strategy can struggle in more tuned games, as it tends to be slow and vulnerable to well-timed removal.

What Yuriko brings to the strategy is a way to weaponize the high cost of sea creature cards while filling the deck with something a little less generally useful and less easy to cast than things like Dig Through Time. Let's take a look at this brew that's been hiding in the shadows until now.

Great beasts of the depths

Ninjas of the sea

The sea monsters are the most prominent feature of the deck. We're certainly happy to pull any one of them off the top when we manage to connect with Yuriko, as that does massive damage to our opponents, but quite a few of them are useful on their own (aside from just being a big creature). Scourge of Fleets and Slinn Voda, the Rising Deep serve as bounce board wipes if the table needs a reset, while Breaching Leviathan can tap down all non-blue creatures to give you an opening to attack, or just some breathing room. If we need more targeted effects, Brinelin, the Moon Kraken and Hullbreaker Horror can bounce problematic permanents, while Shipbreaker Kraken and Lorthos, the Tidemaker can tap down individual problems.

At some point, we do want to swing with these monsters, and when that time comes we have Serpent of Yawning Depths to make sure they get through, and, when they connect, Spawning Kraken for more Krakens.

As tides ebb and flow

Waves lapping upon the shore

What, you thought we were just going to cast those huge creatures? Nah, we also have a plan to cheat them out with reanimation! We have staple effects, like Animate Dead and Victimize, but we also have a few hidden gems. Soul Exchange is the best reanimator spell you aren't playing, and it's even better here where we can exile our commander and send her to the command zone, where we can ignore her commander tax. We also have Connive // Concoct, which technically has a mana value of 9 and is great to hit off of Yuriko, and also just allows us to to Surveil and reanimate a creature.

Finally, while they don't reanimate a creature to the battlefield, Tortured Existence provides us a way to move creature cards from our hand to graveyard for reanimation, while Haunted Crossroads lets us move them from the graveyard to top of the library for our commander's ability.

A blanket of pure white snow

Icebreaker Kraken pushes us into a snow subtheme, which ends up being less of a departure than originally expected. Graven Lore is a great draw spell that also sets up the top of the deck for Yuriko. Pilfering Hawk is an evasive creature that can help get Yuriko out, or it can happily loot. Frost Augur lets us peek at our top card, and since most of our snow cards are lands, it helps keep them off the top.

Digging deeper, Blood on the Snow is useful as both a board wipe and a reanimation spell. Faceless Haven is a land we can animate to become all creature types, which our commander is super interested in. Turns out Ninjas really are Mutants and Ninjas and Turtles!

I think Yuriko has wound up with a checkered history, and therefore has been saddled with a big reputation. Ninja tribal is a fun idea, but its support has been very swingy. I'm to see what changes with the release of Kamigawa: Neon Dynasty, and to see some new decks that are fully dedicated to the Ninja theme. I haven't heard of any unusual brews for this commander in the community as of yet, but I do want to mention that Yuriko does have a Rat Colony theme page on EDHREC with 5 decks, and that's certainly an unexpected direction for the commander.

It's nearly time to disappear into the night, but before I go, I'll leave you with one more haiku:

Until the next time

As Krakens live down below

So too should comments