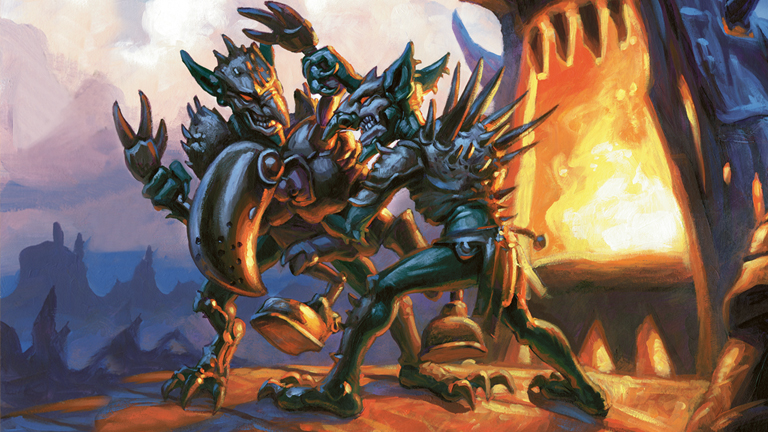 Greetings and salutations to fans of formats both large and small! Welcome back to another installment of 60 to 100, the where we upsize all the decks from constructed formats and bring them into the world of Commander!

This week, I've got a spicy one for you. I know that I say that about most brews I bring to the table, but this one is WAAAAYYY outside my wheelhouse. Like, I barely understand how the deck that inspired the one I built for today works in the first place. It's a combo deck with oodles of triggers, of sorts; the type that you probably shouldn't be playing if you don't actually know how the deck works.

(Check out this comic from Cardboard Crack to see what I mean!)

Getting to the Point

For your most mind jogging reference, here's the list of inspiration for this week's gnarly brew.

For a much, much better explanation of the fun this decklist can provide, I'm going to refer you to the man who first got this archetype rolling. Matt Nass is a top level brewer who brought this deck front and center. and he gives a fantastic breakdown over at Channel Fireball on how to play the deck and exactly what it's capable of.

Expanded Reader's Digest version: Krark-Clan Ironworks when combined with the long-underrated Scrap Trawler and some artifact recursion can create some intensely long loops. Sacrificing artifact, get mana, bring them back with Trawler and Myr Retriever, repeat!

Now this is where it gets fun...since we're not hindered by the limitations of the Modern format, we get to test what we can get away with.

Finding the Mayor of Value Town

Making a quick stop over at Krark-Clan Ironworks page on EDHREC we see the lineup of usual suspects for artifact-centric decks. Breya, Etherium Shaper, Sharuum the Hegemon, Sydri, Galvanic Genius, etc. Those are all well and good, but for me, they aren't worth writing home about. Another Esper colored artifact brew? I've seen too many to count. I can't bring myself to get excited about adding to the thousands of Breya decks, either.

As we scroll down a bit further on the Ironwork's page, though, we see at least a hint of something else that could be interesting. Jhoira, Weatherlight Captain would be a sweet draw engine for playing all those artifacts our Ironwork and retrieval pieces will let us cast and recast. She's not quite there, though. To truly capture the essence of the KCI (Krark-Clan Ironworks) deck, we need guaranteed recursion. Luckily, Jhoira hints towards something that I want to try: the historic mechanic. Artifacts, legendary spells, and Saga spells lines up perfectly for a deck that wants rapid-fire recursion.

So where do we go for more historic stuff? To Dominaria's page of legendaries, of course! This is probably the most crowded page of legendary creatures we have here at EDHREC, but it gives us plenty of options. For this one, I'm digging super deep. As in, only 38 decks to their name deep. Just think about it: the commander of our deck is able to pull our key cards back, not just to our hand, but to the BATTLEFIELD. Yep. Wowsers. Skip having to recast our combo pieces, we can put it back on the battlefield, sacrifice everything again, recur some battlefield triggers we know we can play.... This is perfect. A deck that's all about looping sacrifice and recast triggers gets a commander that rewards us even more for doing what we already want to do!

We know we're sacrificing artifacts to make mana with Krark-Clan Ironworks. We know Scrap Trawler is going to make sure we recur lots of stuff from our graveyard. We even know that with stuff like Mycosynth Wellspring, Ichor Wellspring, and Junk Diver, we are going to double up on a lot of extra value. However, now we need to figure out how to actually win. Pyrite Spellbomb is a key piece in the above decklist, looping over and over to deal damage, but that's a no-go here in mono-white. So how are we supposed to close games out?

When we're making exorbitant amounts of mana, X spells always are a solid way to go. You know I'm a fan of mana sinks on creatures, so something like Walking Ballista or Hangarback Walker fit the bill perfectly. These are cards you may have from your own adventures in 60-card formats already. Churning out even a measly 3/3 Construct and setting yourself up to pump them even further later is a solid route to victory. It takes very specific answers to deal with either of these threats, too, so your opponents better buckle up.

Another fantastic way to eke out a victory with all these "enters the battlefield" triggers is just sneakily good. Altar of the Brood was a mainstay in a similar deck to this when I played my Glissa the Traitor deck of yore. Since we're in mono-white, they'll NEVER expect to get milled out from looped Cathodions, will they? I sure as heck wouldn't. I'd be kind of embarrassed, if we're going to be frank.

Here are some other tips and tricks for playing the deck that I'm going to repeat from the other article I mentioned above, the one by the Matt who's good at Magic.

Something else to keep in mind: Enduring Renewal with a zero- or one-drop creature can create an infinite loop once we start sacrificing it to make mana. Since Renewal puts the creature back into our hand, we can use some (or none!) of the mana to recast it, sacrifice it for mana again, then rinse and repeat to our heart's desire. Want to make an infinitely huge Walking Ballista? Go for it. How about milling them with ETB triggers with Altar of the Brood? You have my blessing there as well.

With all of that out of the way, let's check out this mono-white mill/KCI combo pile of nonsense, shall we?

That's a wrap on this week's episode, everyone. I hope you enjoyed our bi-weekly soiree into the crossing of formats. This one I've been working on for a while, and I'm pretty happy and honestly impressed with how it turned out. Are there any key cards I'm missing in the final brew so far? Let me know in the comments! Thanks as always!