Challenge the Stats – A Bevy of Belbes

Welcome to Challenge the Stats! This series is based on the awesome EDHRECast segment where we pick out ten cards for a commander that we think are overplayed, underplayed, or sleepers to challenge EDHREC’s data. Always remember, dear reader: card choices made by you, the deckbrewer, for any reason such as flavor, budget, art, or fun are always most important and are what keep our format unique and awesome.

Fun fact! It's since been corrected, but when I first looked up Belbe's art during Commander Legends spoilers, the URL for her Art of MTG page said "artofmtg.com/art/belbe-eye-of-yawgmoth", so Belbe, Eye of Yawgmoth might have been her card name at one point!

Belbe wants to ping all of her opponents to get a six-colorless-mana boost on her post-combat main phase. That's a huge amount of ramp, and folks are using that mana to power out some bangers. I love that we can plug in any crazy top end we want for Belbe. Our opponents can take advantage of this ability, too, although they're more likely to get two or four mana since their decks aren't built around it. To offset this bonus, some people are leaning into taxing opponents' spells.

We're going to challenge the data from all 530 Commander decks at the time of writing, and you can see how often those cards are played in parentheses (%). Here we go.

Let me use the Staff to highlight what appears to be a soft spot for Belbe players: colorless six-mana cards. Just take a look at her mana curve (below)! While this totally makes sense because they allow you to ensure that that Belbe mana all gets used in one place (even on turn two), I think we can be pickier in our choices. I'd lump God-Pharaoh's Statue in, too, but I can see a good chunk of y'all like those Stax pieces.

Does it make sense to be so worried about efficiency and not wasting mana on turn two that we play a sub-optimal card? I'd rather let a mana fizzle and play an impactful five-drop, like Wandering Archaic or Psychosis Crawler. It might sound crazy, but what about a Book of Rass, potentially drawing three next turn and having a great mana sink hanging around? Ugin is another card that's a giant improvement over the Staff. 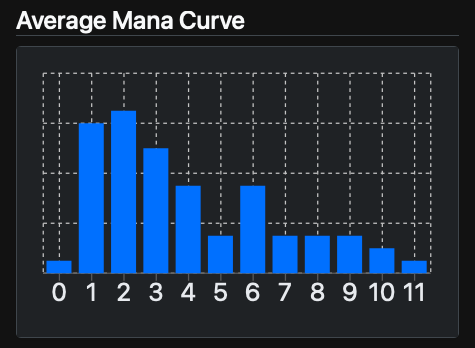 Our deck wants to make opponents lose life in two ways. The first is with quick creatures that we can drop on turn one that attack on turn two to ping the table, like Night Market Lookout and Mardu Shadowspear. The second are more persistent ways to ping opponents that will stick around and repeatedly deal damage. These second-volley effects should have some extra utility to them.

Let's take a look at some options. We want efficient ones, like Sanctum of Stone Fangs and Retreat to Hagra, but when we get to four or five mana we really want them to do something else to earn their slot in the deck. Palace Siege is great because if we don't need the damage we can get some card advantage from our graveyard. Court of Ambition and Loyal Subordinate pack more damage in their punch, and Psychosis Crawler can turn a draw spell into a wallop. These are the contenders Ill-Gotten Inheritance is up against, and it's lacking the punch and extra utility we can find elsewhere.

The play pattern with Extort is awkward with Belbe's ability. To activate our Belbe trigger, we need to cast two spells on our turn one to Extort, and another big one to use the mana Belbe got from that Extort. That's too many hoops to jump through. Similarly, the new Witherbloom Apprentice is being included in 41% of new Belbe decks, and has the same issue of needing to cast an instant or sorcery before you get your Belbe mana rebate.

Besides it being a fantastic card in nearly any black deck, there are two reasons we want Damnable Pact as part of our draw package for Belbe. First, we can dump a whole bunch of mana into that X to draw a ton of cards. Second, we're more likely than most decks to have enough mana to use Damnable Pact for its secret second mode: knocking a player out of the game.

This is a pinger that's going to give us extra utility by threatening planeswalkers. It will be very hard to block, and except in the case of our opponents having a token army, they'll have some tough decisions to make when we attack with it.

The ramp package in a Belbe deck will be more interesting than most. On turn one, we'd rather be playing a one-drop pinger than a Sol Ring, so if you're like me and love a reason to cut Sol Ring, here it is. We're going to be more focused on fixing than ramp. We want a black mana on turn one to play a pinger, a green mana on turn two to cast Belbe, and then we're really jazzed about kicking six mana into our Everflowing Chalices and Skyclave Relics. Another I'd add to that arsenal is Animists' Awakening. We can't play it until we have one green mana available, so probably not on turn two, but on turn three we can likely cast this for at least X=8 and ramp a whole heck of a lot.

Hurricane is a multi-functional all-star in our deck (and, to a lesser extent, Squall Line and Canopy Surge). We can cast it for X=1 to simply get a Belbe refund, we can use it as a boardwipe for fliers, and best of all, we can win the game with it if we have a lot of mana and the highest life total!

I was very surprised not to see this classic black draw mana sink on Belbe's EDHREC page. Erebos, God of the Dead should be up there, too. These are great draw cards all by themselves, and they'll do a lot to help make sure all of that Belbe mana goes to good use! They essentially turn into Greed if we have extra mana lying around.

While it's getting outclassed in some decks these days, the flexibility on Astral Cornucopia is great and is why it warrants consideration alongside rocks like Gilded Lotus (15%) for Belbe. We can sink all the Belbe mana into it for a rock that taps for two, or pump more or less into it depending on the situation. For that reason, it's nearly as good as Everflowing Chalice and Skyclave Relic in our deck. Belbe probably isn't ramping on turn two, she's probably entering the battlefield, meaning we can include some less efficient and more fun rocks.

I mentioned it at the top, but I love Psychosis Crawler in this deck. It's guaranteed to trigger Belbe at the start of every turn, and we are going to want to have enough gas in this deck to keep dropping haymakers. While we're gassing up our hand, why not spread around a ton of damage at the same time? Also, it's a great way to use Belbe mana, even on a turn two play if we're set up perfectly.

Let's go to a decklist! I had some fun with the top end. Insert any wacky expensive cards you want!

What did you think of these challenges? Are there any other cards you would challenge? Let me know in the comments below! As always, you can find me on twitter @jevin_mtg or shoot me an email @ jevinlortie@gmail.com.

Vote on next article's Challenge the Stats below!