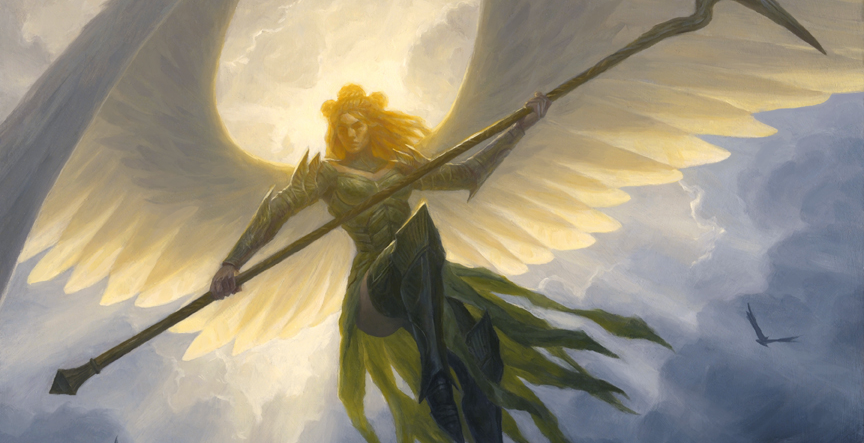 Hosting Herons for the Holidays

This week, we're discussing a commander from Avacyn Restored in honor of returning to Innistrad: Sigarda, Host of Herons!

Luckily, we have a seasoned Sigarda player on the EDHREC team: Dana Roach, who is known for his hipster commander choices, extensive knowledge of obscure cards, and most importantly, his majestic beard. Dana was gracious enough to consult with me on these challenges, and you'll find his responses below (in italics). If you want to hear more of his insights, check him out on the EDHRECast, his other podcast CMDR Central, and writing articles on EDHREC and Commander's Herald.

We're going to challenge the data from all 770 Sigarda decks at the time of writing, and you can see how often those cards are played in parentheses (%). Here we go.

Players seems to be torn on land ramp (Kodama’s Reach-48%) vs. enchantment ramp (Fertile Ground-49%) vs. enchantment cost-reducers (Herald of the Pantheon-37%). I asked Dana how these compare, and which ones are worth running.

Dana: Cost reducers are maybe worth it, though I think it depends on how many Auras and enchantments you run with colorless pips. I've seen them in decks filled with Ethereal Armors and Daybreak Coronets, so the reduction they generate isn't that impressive.

Land ramp is safer from being removed, generally speaking, but I think the slightly increased risk to losing your Wild Growth or Utopia Sprawl is worth it when the upside is drawing a card (or two or four). Plus, they add to the enchantment count for things like Serra's Sanctum, Ancestral Mask, etc., and add to the pip count for Nykthos, Shrine to Nyx. All told, I think the advantages to enchantment ramp pretty heavily outweigh the negatives.

Perhaps she's included as an Angel buddy for Sigarda, but Shalai clashes with Sigarda's strategy for a couple reasons. The first is that she gives Sigarda redundant hexproof. She gives our other creatures hexproof, too, but most Sigarda decks are focusing on buffing up Sigarda and probably don't have a ton of other creatures that are essential to protect. It's definitely nice to protect your Argothian Enchantress, but that slot might be better served with another piece to keep our engine running.

Secondly, her ability to put counters on every creature we control does a lot more work in a go-wide deck. For six mana, we're really only happy paying that high cost if we have 5+ creatures to distribute counters to, and that rate is pretty bad for our Voltron plan of buffing up one creature.

Karametra isn't going to get too many creature triggers to help ramp us. The average Sigarda deck on EDHREC has less than 20 creatures, which is a decent amount, but do we want to be ramping at five mana anyways? We're also playing a lot of cheaper enchantments and Auras to trigger card draw, and Karametra is a bit higher than what we want to pay to trigger our Enchantress's Presence.

Dana: The problem with these three cards is that normally you're at risk of being two-for-one'd. You cast Soul's Majesty (8%) on your big beater, and someone removes it, simultaneously removing your big beater and fizzling your spell. Sigarda (and Dragonlord Dromoka) solve that problem 99% of the time by making it almost impossible to remove her in response. Additionally, you need to be able to poke through for damage, something a flying Angel (and Dragon, in the case of Dromoka) can, and almost always, do.

With Sigarda out, Hunter's Insight (9%) is a baseline draw five for 2G, Soul's Majesty (8%) is a draw five for 4G, and Hunter's Prowess (4%) is a draw eight for 4G, and that's baseline. Generally speaking, all three wind up drawing me double digits. Plus, Hunter's Prowess granting trample has been useful in more than one situation late game when I had Sigarda suited up with Auras to make her 20+ power but my opponent had flying blockers.

This lovely utility enchantment creature prevents Sigarda from being countered, which is a key way players can interrupt our plan.

Also, as Dana astutely points out, "It can also stop someone from countering that potential game-ending enchantment, like Ancestral Mask or Battle Mastery."

This enchantment staple used to be over $15. With a reprint in Modern Horizons 2, it's delightfully hovering around $2 now.

Dana: Mark of Sakiko is in just 8 Sigarda decks overall. The worst case scenario here is almost always spending 1G to get 5 mana back since it's almost impossible to stop at least one swing with an evasive, hexproof body. Then, someone wipes the board and it goes away. Much more realistically though, thanks to Sigarda being hexproof and rarely just dealing 5 damage, you might generate 8, 10, 12, or even 20 mana off a single swing, and there's a decent chance it sticks around for multiple turns. And, if someone wants to blow a Disenchant on Mark of Sakiko? Well, that's a win too.

Plus it draws you a card off Hunter's Insight, Soul's Majesty, and Hunter's Prowess.

One key thing Sigarda is missing is haste. Sure, we can throw on some Boots (17%) or Greaves (11%), but why not lean into the theme? Instill Energy can trigger all of our card-drawing Enchantress effects for one green mana, effectively cycling itself if we're digging for answers. It also provides pseudo-vigilance with its second ability, which can be pretty relevant if we're hoping to swing in but also want to leave up a blocker on defense.

Dana also likes Hall of the Bandit Lord as a haste enabler, since the deck often has enough lifegain to make up for it.

These are two of my favorites. There may be more optimal choices, but let me make a case for them. Sometimes, we'll need to tap out for Sigarda, and if a board wipe happens after, that we'll be pretty sad. These enchantments prevent most destruction-based board wipes from setting us back, and we can get them out before we cast Sigarda so that she's protected as soon as she hits the field. Unlike Auras, these never go to the graveyard as long as there's a creature out for us to target - we can always bounce them back to hand.

Plus, if we're digging for cards, we can bounce these back to our hand repeatedly to trigger Enchantress effects! Flickering Ward has been creeping up in price, and these warrant a look for the same reason.

...is how you tell someone the party is over in Wisconsin-ese.

Big thanks to Dana for all his help and expertise on this challenge! You can find Dana on twitter @danaroach.

What do you think of these cards? Are there any other cards you would challenge? Let me know in the comments below! As always, you can find me on twitter @jevinmtg. If you like to challenge the stats and want to join the discord, click here.