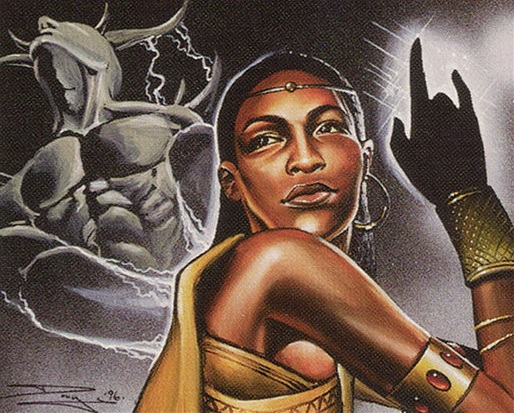 Welcome to Dual Shot, where we brew two decks at the same time… in one deck! This typically leaves us with a marriage of themes, sometimes in a neat 80/20 balance, other times in a mess of abstraction, a melding of approaches. Half one way, half the other, with a bridge between.

This time, two partitions will display a unity of focus, but to the exclusion of their peripheral awarenesses. They are alike in purpose, but they are not like-minded, even if they share the same headspace. Although sometimes, if your Voltron commander works, there won’t be much left in the way of headspace, not with Zurgo Helmsmasher at the, uh, helm.

(Check the archives! Have we made that joke before? If not, originality! If so, continuity!)

This edition of Dual Shot brings us another combat-centric deck. I know, be patient, I’m sure there’ll be a Wheel deck inside a Stax deck, or a Rat Colony deck inside a Persistent Petitioners deck inside a Shadowborn Apostle deck someday.

But no, for now the duality is a subtle one, one scarcely aware of its own schism, obvious and opaque at once. In one sphere sits the straightforward, the outward, the brash, even the honorable. In the other hides the meandering, the muttering, the surreptitious, the anxious. Day and night aren’t so different; they merely color the sky. The sky’s purpose is still there.

Our general wants to smash. His army isn’t even on the same battlefield. Reducing it down, this is a win-by-commander-damage deck atop a wide, evasive combat deck. To each end, Rage Reflection, Savage Beating, and Insult // Injury seem to act as the only channel of communication and compromise. Otherwise, we’ll be fighting two different wars. Self and shadow. Conscious and unconscious. Ego and id. Digestible and euphuistic. Dictionary and thesaurus. Something and… someplace.

Anyway, tangled among all the cards that exist in one camp here (e.g., Howl from Beyond is really only going to benefit your commander, while Stir the Pride only exhibits its utility when the shadows are long), there are two tenuous, brittle bridges: Dauthi Embrace and Dauthi Trapper.

This deck’s raison d’être. With these, Zurgo can give into his Shadow archetype, his buried truth. He is no true Khan of the Mardu Horde, not in the sense of acquiescence to the weight of culture, of honorable battle, of vendettas and oaths and ambition. All of that is in service to the chase of the bloodbath. An otherwordly stab in the back will meet that requirement just as well as crossed swords.

But there is a danger in giving in to the dark. With an army stuck in the shadow, you’ll enjoy your evasiveness, sure, but in doing so, each of your opponents are guaranteed the same. You cannot block. And like our psychic shadow, if pressured into a defensive posture, it is a perverted one. Paranoia, carelessness, irrationality. You know, the “always be attacking” type of Jungian psychology. That isn’t to say this deck can’t work, only that, unlike typical Dual Shot fare, the pivot presented here is rather more like shifting our weight from a fixed stance. Here, despite our brazenness, our brashness, our bravado – our brutality – we do not adapt, we submit.

This is a deck at odds with itself. Running Raid Bombardment and Cavalcade of Calamity is terribly risky, since while we do prioritize effects that grant double strike, rather than simply buffing our power, these do seem like the first cuts to make. Kediss, Emberclaw Familiar feels like the all-star here, definitely going a long way toward making this list seem fun and not frustrating. But that aggravating antipode is at the very heart of this deck – something honest and something askance. This brew does a good job of illustrating an early glimpse into the goals of Magic. You want to win by dealing damage to your opponents, so dealing unavoidable damage quickly seems like the clearest path to victory. But then caveats begin to pile up, lines of play become visible only after you’ve closed them off, and someone played Stasis and somehow there’s an Elspeth, Knight-Errant that’s going to ult and there’s nothing you can do about it.

Often, this excavates a salt mine – at first. But it’s that same circuity that keeps us coming back, reliving plays in our heads, sharing jank with friends, and turning grim metaphors into decklists at the insistence of the plague-madness.

That’s it for this episode! Check out Trent Trombley‘s Evasive Maneuvers – Shadow for more insight into this tech! Dauthi Embrace and Dauthi Trapper see a < 1% inclusion rate on EDHREC, and Shadow, in general, is an underappreciated mechanic; it seems that people’s enthusiasm for the keyword dwindles once they realize that it means they can’t block. But to hell with blocking, I say! Zurgo, smash!

Let us know in the comments below when “always be attacking” worked for you. Or, perhaps more interestingly, tell us about a moment you had in your Commander career when you realized that this game had more going on underneath the hood that you’d first thought. Anyway, stay safe and stay sane. Till next edition.

Try to stay safe and sane after next edition, too.