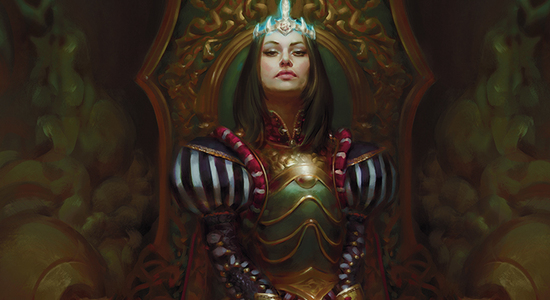 At the end of last year India’s Prime Minister, Narendra Modi, announced a bold plan to cut out black market spending and corruption. Eliminate money. Not all money, but enough of the untraceable, large denomination, physical bills so the underground economy is either left exposed or starves. A wave of anti-corruption politics has swept other areas of the globe as well. Russians have gone out to protest. Famously and humorously with rubber ducks; accusing Prime Minister Dmitry Medvedev of having enough corruption money to buy extraneous amenities like a “duck house.” Even in the United States there has been talk since President Trump’s campaign of “draining the swamp.” These sorts of policies and protests are focused on how corruption stagnates the government and ensures political and economic inequality. I think it may be a good time to look at how these anti-corruption campaigns can influence our local meta-games and deck building.

Crafting your local meta-game is not something you can do alone. It takes patience and self-reflection for everyone involved. This is something more important when looking at a small group of friends rather than the whole of the gaming store. Largely a store’s meta revolves around the mentality of the people playing, but also is shaped by the prize structure and store support. There is likely a larger variance in play styles across a whole store making consistency difficult as well. However, changing your behavior can significantly impact those around you. Transparency remains a cornerstone of preventing corruption. Corruption needs silence and shadows to thrive. Honesty and openness is important for any gaming group. Falling into secrecy and conspiracies is easy and dangerous. Helping create an environment without secret alliances and baldfaced lies makes an inclusive game, like Commander, more inclusive. Our format should be fun and casual. Maintaining this casual, open environment helps you keep more friends interested. This interest means more people, but also a thriving evolution of changing deck lists. You need some variety in what you build too. Playing that same Atraxa, Praetors’ Voice every week will make anybody want to lobotomize theselves with their own Pithing Needle. Play some control, some combo, some mid-range, and for the love of Queen Marchesa please play some more aggro. Nobody will care about updating deck lists if they don’t have fun playing week to week.

In deckbuilding, transparency means crafting without ulterior motives. Building for the sole purpose of taking down one player or deck is frustrating. Boiling away the Talrand, Sky Summoner’s Islands gets a big red “X” on your back from the other players and likely an unfriend on Facebook from the Talrand player. This doesn’t always lead to the current game being unfun for everyone, but almost never wins you the game and changes your meta into something that can quickly be awful for everyone. You really do need to have access to hate cards, but if everyone ends up with stax-esque hate lists tuned for their meta you may as well be beating your head against a wall for an hour and a half. Your meta cards need to be appropriate. I have long been an advocate of meta specific hate cards, but for your and your meta’s sake the cards need to be versatile. If you want to win games your hate needs to be effective at stopping or slowing threats, but needs to be versatile enough not to be dead against anyone else. Thalia, Guardian of Thraben works well in many metas as hate against many different combos or unfair strategies like storm, but is rarely a totally dead draw. Designing your hate for your meta is also never cut and dry. Stony Silence because you are playing against one Breya, Etherium Shaper player is not fun, but when playing against three, that is being well prepared.

Creating a system of checks and balances for your meta games can be a helpful process too. Governmental systems compartmentalize power in ways that counterbalances dishonesty and abuse of power. The process of playing commander in any sense acts much the same way. Using combined powers to take down another stronger player is common in EDH politics. There are ways you can keep the power balance in flux. Playing the same game of struggle for power with the weaker players quickly becomes stale. Imposing a deck change upon the group or even yourself can help keep things fresh. Playing only one deck is not only annoying, but creates more opportunity for targeted hate.

Laws are in place to prevent unfair practices in many cases, but in others they can breed them. There are laws with the legal system with unintended loop holes or unforeseen consequences. These can get exploited and perpetuated by corrupt officials. Cutting out these pieces of red tape creates simpler systems that are easier to manage. Creating too many rules in your play group can have the same issues. Many times adding cards that your group can’t play is less fun than adjusting your play style to account for those cards. If you are getting sick of your friends playing combo all the time adjusting the amount of artifact enchantment hate you play can be all you really need. Probably better yet, don’t befriend sadistic maniacs. On the other hand, even changing how the rules are played and cutting the EDH rules committee red tape can spice up your meta. Unbanning cards to be played in your meta with people you trust can be a fun way to see new decks. Changing how Commander-specific rules play can also make things fun for your group. It could be fun to see some hybrid in your mono-color decks. These last changes won’t turn a bad meta into a good one, but could help keep some new ideas flowing into your group and change things up.

This Queen Marchesa deck is a pick for what I want out of my meta. I have been having fun with aggressive decks lately because I think they offer something to politics that isn’t always there. It creates a sort of boldness that you can’t argue with. You have little reason for subterfuge and lies because you hold the power in any given situation. Queen Marchesa and the monarch mechanic can create situations where there are no truly stalled boards. There is always reason to attack. Many lists on her EDHREC page include Ghostly Prision effects to keep the monarch, but I wanted to make a list that felt more active. There still similar effects in Norn’s Annex, but those work more to take life totals down than prevent attacks. I wanted the ability to sweep the legs out from anyone that can “Take the Crown.” Creating perpetual aggression is based in Act of Treason effects like Mass Mutiny. Alongside Aggravated Assault your cards work to keep even just a few creatures on your side attacking. If the targeted tactics of Act of Treason effects aren’t enough you have just about every Vindicate effect available to you in the Mardu colors to punch down threats and answers alike. I took out most cards that just further the length of the game. I wanted every turn to have not only this deck attacking, but others as well. Keeping this sort of aggression going, makes for a fun game. Fun games lead to healthy meta-games.

Thank you for reading! I’m curious what your meta looks like. What do you think makes for a healthy meta-game? What has your group done to change its meta? What sort of hate cards do you run? Also, what sort of real world politics or EDH politics would you like me to cover next?