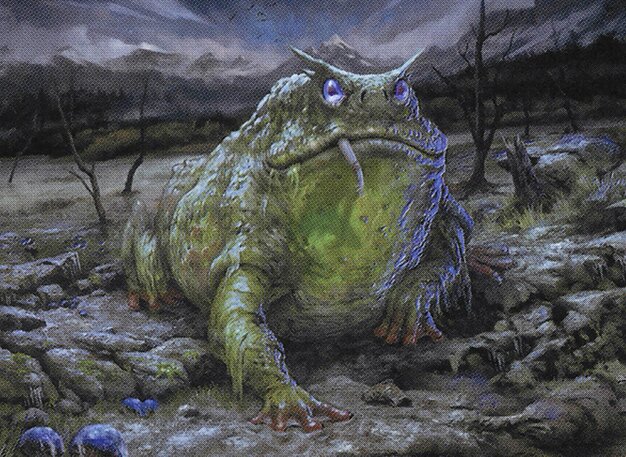 Let's take a look at Grolnok, the Omnivore.

Grolnok is a versatile permanent-based commander that acts as a self-mill card advantage engine. One of the most impressive things about it is its sheer flexibility, allowing it to be at the helm of a myriad of permanent-based strategies; even Flashback-heavy investments have a good payoff, since they don't get exiled. It honestly really feels more like a Sultai legend than like a Simic legend, which is a good thing. The tribal aspect of Grolnok might be an underrated element of its kit; it allows for cheap Changeling cards, like Universal Automaton, to accelerate its mill triggers, although I wouldn't invest too heavily in tribal synergies.

Grolnk is a powerful way to get incremental advantages, but a secondary effect of its kit is a way to dig for specific cards. Cards like Mental Note and Thought Scour become powerful digging tools, and slower cards, like Mesmeric Orb, are basically free looks. All this digging needs an actual payoff, otherwise what's the point? There are a bunch of powerful cards to consider, but one combination that caught my eye very early on was the Teferi, Mage of Zhalfir and Knowledge Pool combo, a powerful hard lock that has a surprisingly safe play pattern for an 11-mana combo (we use Teferi on EOT and play Knowledge Pool on our turn).

Self-mill is an important part of our deck, and we need a solid foundation in order to fully utilize our commander's ability. Codex Shredder and Wand of Vertebrae are cheap self mill sources that can also help if we get an important card stuck in our graveyard. Merfolk Secretkeeper, Minister of Inquiries, Hedron Crab, and Universal Automaton (to some extent) are self-mill sources that can be used as blockers in a pinch. Crawling Infestation and Crawling Sensation are slow self-mill enchantments, but they provide a lot of defensive power in the mid-game.

Since we have the ability to dig through our deck and have access to a lot of permanents, we're using a silver bullet suite that allows us to have a nice array of answers to problematic effects. Venser, Shaper Savant and Frilled Mystic are good defensive options; while we lose the element of surprise, having them constantly there can play mind games with the rest of the table whenever we leave mana open. Scavenging Ooze and Soul-Guide Lantern are effective graveyard hate that can also provide a bit of secondary value that might prove to be useful even when the graveyard hate is not all that necessary.

Our commander is our main source of card advantage, so keeping it alive is extremely important, which means that including a protection suite is very much a must if we want to have any sort of consistency. Lightning Greaves, Swiftfoot Boots, and Darksteel Plate provide some solid protection against single and mass removal. Crystal Shard and Erratic Portal are a bit of a spicy tech that not only can protect our commander, but also get value from our many strong ETB creatures.

We have three powerful planeswalkers that, because of their sheer power, I feel are very relevant to discuss. Karn, the Great Creator is an interesting addition; on the one hand, it acts as a silver bullet, but its main purpose is to imitate our commander for our key artifacts (mainly Knowledge Pool).

Tamiyo, Collector of Tales is a fantastic card in this list. Her +1 is great when we have our commander out, and her -3 is a great failsafe ability in case we get a card in the graveyard that we really want back. Narset, Parter of Veils is a powerful lock piece, and together with Commit // Memory and Echo of Eons, we have a powerful easy to execute combo that doesn't really rely on our commander and can buy us the time to assemble our main lock.

Say this current list isn't 100% your style. What else could you pursue to assist this strategy?

Investing heavily into Stax effects, removing the cantrips, and playing more like a pillow fort strategy could be quite effective, since one of the main obstacles of such strategy is finding its relevant effects in time.

Finding another permanent-based combo can also change the deck up a bit. Earthcraft plus Squirrel Nest is a cheap (at least mana-wise) "I win" combo that can be very easily dug out with our engine. We could even put more priority on self-mill cards to go even faster!