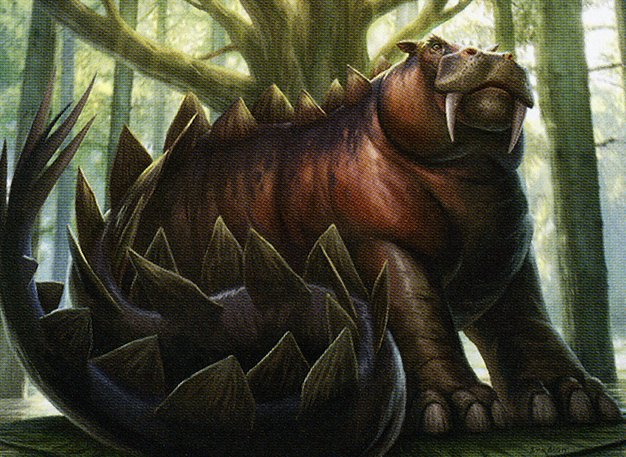 This week we'll be looking into one very angry Hippo. While it has probably the most controversial keyword ever created, we're using it the good ol' fashioned way. We're talking about Keruga, the Macrosage. Note: the Companion text below is the errata version, not how the card was originally printed.

Companion — Your starting deck contains only cards with converted mana cost 3 or greater and land cards. (If this card is your chosen companion, you may put it into your hand from outside the game for {3} any time you could cast a sorcery.)

When Keruga, the Macrosage enters the battlefield, draw a card for each other permanent you control with converted mana cost 3 or greater.

There are a lot of differences between Keruga as a Companion and as a commander. In this article we'll be looking at Keruga as the latter. To read about Keruga in the Companion zone, here's a link to my Collected Company article.

Keruga's ability is really strong in the Simic colors: having an explosive draw effect that rewards committing to the board can be quite powerful, and we have enough support to exploit it.

Unlike its Companion version, Keruga as a commander is not restricted to three-CMC and greater cards, so it can pack normal interaction, such as counterspells and cheap removal, which makes building it as a commander much less risky.

Keruga has one glaring weakness: it needs to overextend to reap the benefit from the draw. This leads into situations where we can get blown out by board wipes while trying to get more value from Keruga.

Keruga is a powerful midrange commander; most lists are packing creatures with powerful effects to fuel Keruga's card draw, this is similar to a blink shell, and it can even be adapted to become one. There's something to be said about the risk of using creatures to get value from Keruga, since it's very easy to get blown out by board wipes.

To counteract the need of overextending, we could use cards like Alhammarret's Archive to make Keruga's trigger more efficient; however, that means that we need to find and play them before casting our commander. This play pattern can be awkward because these are kill on sight cards, which means that it's very likely that we won't untap with them. But what if I told you that, without having to rely on any specific enablers, there's a way to always get double the value from our cards?

Enter Control Magic, a four-mana enchantment that allows us to steal creatures from our opponents. Which ultimately means that we get double the card draw for each of these effects that we've played!

While our core theme is set, we still need to find a shell to enable this interaction. Group Hug is great for this as it allows us to develop our game plan while flying under the radar. Our Control Magic effects can even help this strategy as a whole because we can steal threats from our opponents, if their board state gets too big.

Our game plan is very mana hungry. Because of that, the Hug pieces that we are looking for are mainly ones that provide us said mana, either by ramping or drawing into them. New Frontiers, Collective Voyage, Veteran Explorer are explosive pieces that, if played early on, opens up the game right from the start. Since our commander can be a great source of card draw, it isn't our main concern; however, it still helps both at finding our ramp and as a political currency.

Here are some cards that help us along in our plans:

Our game plan isn't so efficient at closing games. After all, beating people with their own creatures can be quite slow, especially when said creatures can disappear after their owner is eliminated from the game. Therefore, we still need some threats of our own. The hardest part, for me at least, in any politics-oriented deck is finding the right win condition; we need them to be effective, but they can't be too effective or else they'll attract aggro and undo all of our hard political work. Mill works perfectly for what we're trying to accomplish; cards like Sphinx's Tutelage and Psychic Corrosion can be great "concealed" win conditions because, until we start going off, they don't present as themselves as immediate threats for the rest of the table.

Our deck is lacking in targets for cards like Erratic Portal, or even Panharmonicon; however, when considering that our commander is our main way to recover cards, it's easy to understand how this support suite can be effective. These pieces become especially good in the later portions of the game, when we have enough mana to both draw and play cards on the same turn.

One of the main setbacks when playing Group Hug decks is that we can sometimes accidentally act as a kingmaker. This happens because many of our more explosive effects can only be played on our turn, regardless if the next player is already too far ahead or is unwilling to cooperate. To get around this, we're playing some Vedalken Orrery effects; these cards are great because they give us a new dimension by which to bargain because now we can try to make deals regarding when we play a Hug effect. They also play well into our Control Magic spells, as stealing a creature at instant speed allows us to have a pseudo-haste effect.

Our opening hands are very flexible; we're mostly looking to play some ramp and stay on curve. Overall, some easy mulligans are hands that contain too many late-game pieces, such as: expensive threats, mill pieces, and Keruga support. We have an expensive deck, and we won't have the time to cast them all if our opening hand is full of them. The sooner we start playing our Group Hug cards, the sooner we can start making deals (and hopefully steal some important threats); however, if we take too long to ramp it, can slow us down by the mid-game.

By the mid-game, we should be looking for the opportunity to either: play Keruga and draw some cards if we're running out of steam; start making deals with the table, if we drew some of our Hug pieces; or even steal some threats, if we need to break parity or control the board. When looking to make deals, especially when it involves symmetrical effects, we need to carefully consider how it affects each other player, because games tend spiral out of control when we fail to do so. Alternatively, we could try to make a deal with the already established threat, if we think that we can out-scale them in the late game. This allows us to use them to eliminate other players while we develop, waiting for a chance to strike. Needless to say, this might be a bit salt-inducing for the rest of the table, especially if we go on to lose the game.

Our late-game chances are pretty good, and if we're doing our job right, we have a decent chance of living to see this stage of the game quite comfortably. This gives us the time we need to develop our mana in order to play some of our more expensive threats, like Avenger of Zendikar and Rampaging Baloths; or even go crazy on the mill pieces. It's important to understand when to make the face-heel turn; if we go too soon, we might not have what it takes to finish the game, and if we take too long, we might be too late.

Another way to build is investing deeper into creatures with ETB triggers, like Reclamation Sage and Wood Elves, and lean heavier in the flicker side. Cards like Thassa, Deep Dwelling and Conjurer's Closet can do some work, but they're just awkwardly slow without a higher number of decent ETB creatures in our deck.

Another change could be substituting some win condition (probably mill, as it's very slot-heavy) to be more combo-oriented. The Food Chain plus Eternal Scourge/Misthollow Griffin combo is game-ending when combined with our commander, as we get to draw our entire library and then use Laboratory Maniac/Thassa's Oracle to win the game. If considering this approach, we should also include a dedicated tutor suite to help to find our combo pieces.