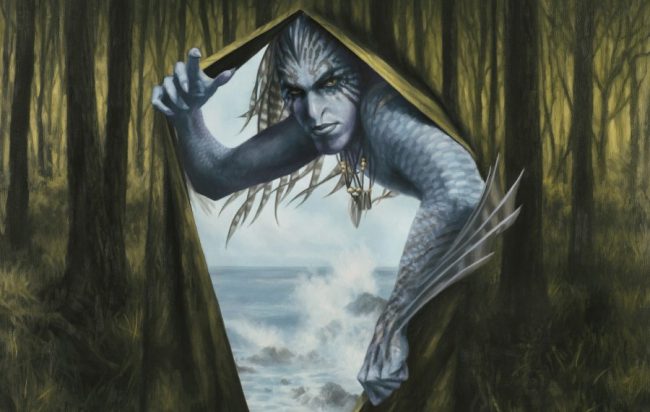 Greetings, sleuths, saboteurs, and skulkers! Welcome to another installment of Evasive Maneuvers, where we examine keywords and strategies that help get our creatures through during combat.

This week we'll be taking a look at one of Magic: The Gathering's oldest forms of evasion: Landwalk. First introduced in Alpha (e.g. Bog Wraith), Landwalk contains a super- or sub-typing that modifies the actual land it cares about: Swampwalk cares about Swamps, Mountainwalk cares about Mountains, etc. Creatures with the given typing cannot be blocked if the defending player controls at least one land of the specified type or characteristic.

Let's start by looking at the breakdown of cards that have or grant a basic Landwalk type: 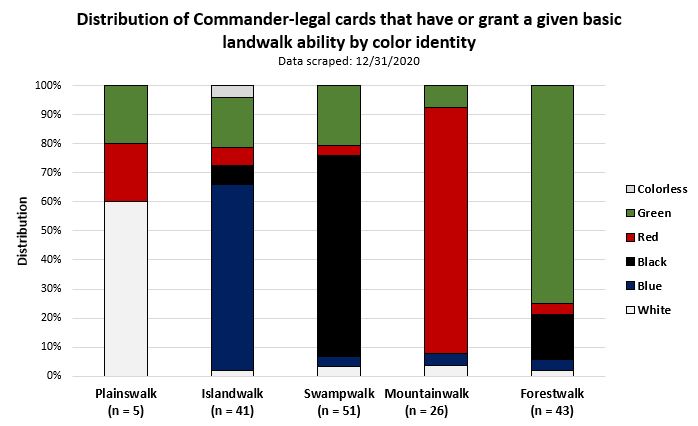 Generally speaking, most cards that have a Landwalk type share the color identity of that given land. This makes complete sense from a flavor perspective: Merfolk Spy has Islandwalk because it (presumably) lives in the water, Canyon Wildcat has Mountainwalk because it lives in the mountains, etc. The dearth of cards with Plainswalk also makes sense, considering its confusion with the story arc of planeswalkers and their ability to...well, 'planeswalk.'

Notably, there are some other Landwalk typings outside of basic characteristics, but not many. Ayumi, the Last Visitor and Livonya Silone care about legendary Landwalk, Dryad Sophisticate and Trailblazer's Boots care about non-basics, Legions of Lim-Dûl, Rime Dryad, and Zombie Musher all care about the Snow super-type, and Desert Nomads is the only card to date that evasively maneuvers through Deserts.

Once an evergreen ability, Landwalk has since fallen heavily out of favor with R&D. Similar to Fear and Intimidate, the efficacy of Landwalk is largely determined before the game begins, simply by virtue of the decks (manabases) that you're playing against. Whereas creatures with Fear and Intimidate were largely over-costed in their CMC (e.g. Dross Prowler), Landwalk creatures tend to be undercosted or on curve (Grayscaled Gharial), making them perform especially well ahead of curve against the right manabase, or do nothing against the wrong one. Finally, lands aren't something players can easily switch out of their deck to metagame, so it tends to result in feast or famine scenarios from the get-go.

In other words, 93-98% of decks that can run a basic land, Snow-covered or otherwise, do. A small 2-7% of decks that don't include basics when they could are likely doing so because there are better options, particularly in multi-colored decks.

For example, as of 12/31/2020 there are 1,202 Golos, Tireless Pilgrim decks that don't run a basic Forest. With enough fetchlands (e.g. Verdant Catacombs), dual lands (e.g. Bayou), and other rainbow lands (e.g. Mana Confluence), or a Prismatic Omen, you may not even want basics. Alternatively, there are those decks that have access to multiple colors but run less, like your mono-black Oloro, Ageless Ascetic, your mono-white Golos, Tireless Pilgrim, or mono-red Najeela, the Blade Blossom decks. The cult of Field of the Dead seems to still be on the rise, so I wouldn't be surprised if you see other non-basic inclusive decks crop up more and more.

In addition to your basic lands, each basic land typing has the following card possibilities:

The good news is: multiple land types on the same card may help our opponents in mana-fixing, but it also helps us in making our Landwalking be more effective. Shock lands (e.g. Hallowed Fountain), various other dual lands (e.g. Tundra, Irrigated Farmland, Prairie Stream) and even the relatively new Triome lands (e.g. Raugrin Triome) all give you a higher probability of making your Landwalking more effective.

Colorless decks pose an issue, as most Landwalking abilities are tied to specific basic land typing, not Wastes. But considering that colorless decks make up less than <1% (n = 3,441 total lists) of the overall decks scraped by EDHREC, chances are you won't encounter them all that often. Even if you do, as you'll see below, we have some solutions.

In true rock-paper-scissors fashion, Wizards was keen to design cards that interact with Landwalkers, particularly in shutting them down. Thing is, not many people run them, because actively running a hosing effect against an already underplayed strategy just doesn't tend to do well.

The first notable cycle is from Legends:

My guess is that Great Wall sees the most amount of play mainly because of its flavor inclusion in Pramikon, Sky Rampart decks, not because people are scared of the constant threat of Graceful Antelope (26 decks) or one of the four other cards ever printed that grant Plainswalking. The rest see abysmally little play, alongside the catchall Staff of the Ages: 3 decks, 0.0006% of eligible decks.

Altogether, the dearth of land-hosing cards included in decks scraped by EDHREC makes a great deal of sense, and if anything, makes Landwalk capabilities all the more viable.

With all this information, one thing is clear: we don't want to end up in a straight mismatch, where our Jukai Messenger is facing against a Krenko, Mob Boss deck, a Vela, the Night-Clad, and a Heliod, Sun Crowned. What we need is a means of ensuring that no matter the manabase we face, we'll be able to get through. Let's shake the earth up a little.

Here's a list of some cards that can alter our opponents' manabases to our fancy. I'm excluding ones that only care about our own lands (e.g. Grixis Illusionist) in this list, but don't worry, we'll get to them shortly.

While not a land 'changer', per se, Yavimaya Dryad is a hilarious card that allows us to tutor any Forest card from our library into play under an opponent's control. Funnily enough, the best target is usually gifting away something like a Breeding Pool or even a Zagoth Triome, as it allows all of your Landwalkers to now get through with ease. Bonus points if you have a Tropical Island to give away just so your Willow Dryad and Grayscaled Gharial can get through.

Vedalken Plotter is a neat card that allows us to exchange two lands in a pinch (and go see fellow writer Elijah's deep dive on it for even more synergies!). Finally, I would be remiss to not mention the awesome card that is Excavator. With a Terraformer effect that changes our own lands, or even a Dryad of the Ilysian Grove, we can sacrifice a basic land to allow us to hit any player with a basic land typing out. Sacrificing a land is no joke, but in the right circumstances, it might be worth it, even politically while a big creature swings at one of our opponents.

Finally, we get to Tanglewalker, a card I've been wanting to get to work for a while now. The problem is, there are only six artifact lands, and while they were absolutely busted enough to get banned in Standard at the time (March 2006), their inclusion rate in decks scraped by EDHREC is not entirely common:

Fans of Budget Magic over at MTGGoldfish may remember SaffronOlive's Liquimetal Control Modern deck, which used Liquimetal Coating and Myr Landshaper to turn lands into artifacts to then blow them up with Reclamation Sage effects. While we want to use the Myr Landshaper for evasive purposes with Tanglewalker rather than land destruction, how do we guarantee we get Myr Landshaper and Tanglewalker in the same game? How do we guarantee we get our Landwalkers (e.g. Grayscaled Gharial) and a terraformers (e. g. Tidal Warrior) in the same game? How do we avoid 'the other half' problem where we draw one half of our deck (e.g. the enablers), but not the other counterpart (e.g. payoffs)?

Let's lean on the commander for this one: Momir Vig, Simic Visionary.

Consistent tutoring is incredibly powerful, no question about it — it's what makes Momir Vig, Simic Visionary the competetive 'Hackball' commander that he is. Yet, this might be one of the most 'fair' uses of his powerful searchability, as we don't have a decision tree of combos to perform. Instead, we will be using him just to ensure our Jukai Messenger can get through by searching up Reef Shaman or Tanglewalker to put Myr Landshaper on top of our library. Plus, there's a flavor component here: Momir's visage of grafting, splicing, and biotinkering to make fin where there was once foot must be done in relation to the environment. Any Simic mage worth his sodium-chloride knows: No change can occur devoid of environment.

We tie it together with some notable budget finishers like Biomass Mutation, End-Raze Forerunners, Scale Up, Jolrael, Mwonvuli Recluse, Beastmaster Ascension, and Overrun, and we've got a list that can Reshape any manabase for our Landwalkers!

Overall, the deck plays out like a weird hybrid of a Edric, Spymaster of Trest deck and a Blind Seer deck. We're leaning into small, evasive creatures, but with additional neat and techy interactions, like Dryad of the Ilysian Grove paired with Collective Restraint to thwart off blowbacks even in a two-color deck, or Transmute-ing Tolaria West for Urborg, Tomb of Yawgmoth to allow our Swampwalkers to get through. In fact, this might be one of the few non-black, non-Karma decks to actually care about Urborg.

What do you think? Do you utilize Landwalking in any of your decks? Have you found it consistent, or highly variable? Sound off in the comments below!