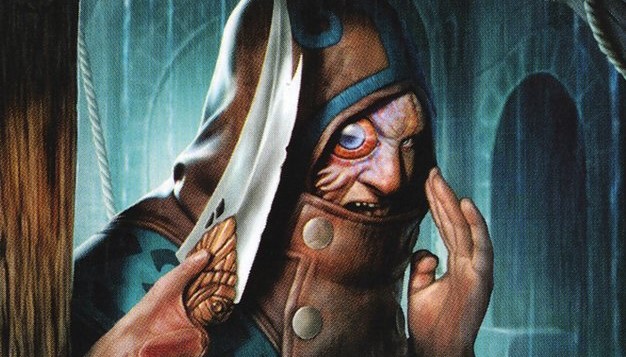 (Behind the Scenes | Art by David Gaillet)

Skulk: The Furtive Path to Victory?

Greetings, sleuths, saboteurs, and skulkers! Welcome to another installment of Evasive Maneuvers, where we examine keywords and strategies that help get our creatures through during combat.

While in our last installment we sought to evade our opponents’ blockers by simply running over them, this week we’ll have to be a bit more devious, as we’re lockpicking one of Magic: The Gathering‘s most (the most?) under-supported evasive mechanics: Skulk. Skulk states that creatures with Skulk cannot be blocked by creatures with greater power. Simple and flavorful in design, yet like a dough that’s too sticky, or that one group member that your instructor or manager paired with you, it’s difficult to work with.

The keyword was designed with the intent of it being an evergreen evasion ability, with the idea that it would reward you for going ‘under’ opponents’ creatures that are suited up with Equipment or Auras. Turns out, it proved much more difficult in playing than it did in design, and sits pretty squarely at a 7 on the Storm Scale, meaning that it’s unlikely to return outside of the right circumstances. Apparently, those circumstances were satisfied in the Secret Lair: The Walking Dead crossover’s Glenn, the Voice of Calm. Outside of that, only 13 cards have been printed with the Skulk keyword, all of them from the Shadows over Innistrad block (Shadows over Innistrad and Eldritch Moon).

Skulk, Where Less Is… Well, Less.

Okay, so a keyword with only 14 cards to its name isn’t a great start. Heck, if creatures with the word “Skulking” in the name are any indication of Skulk’s power level, we’re in for some trouble.

Let’s start off with our color breakdown of cards that have or grant Skulk: 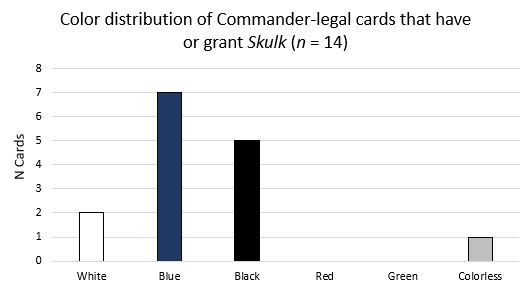 So outside of Odric, Lunarch Marshal and Glenn, the Voice of Calm, Skulk is essentially limited to the Dimir color pairing.

Skulk requires us to be smaller than our opponents’ creatures – we literally are going underneath them. Let’s see how the typical creature with Skulk looks, and then we’ll compare it to popular commanders and creatures as scraped by EDHREC:

So the typical Skulk creature is small — typically a 1/3 like Farbog Revenant — but how does that compare to popular commanders and creatures? Even with that 1 power, are we still likely to encounter some blockers? Let’s look at the distribution of power values by popular creatures as well as all format-legal legendary creatures/commanders. Note: I am excluding some of the wonkier ones like Syr Elenora, the Discerning since it’s tricky to know exactly where their value would end up. 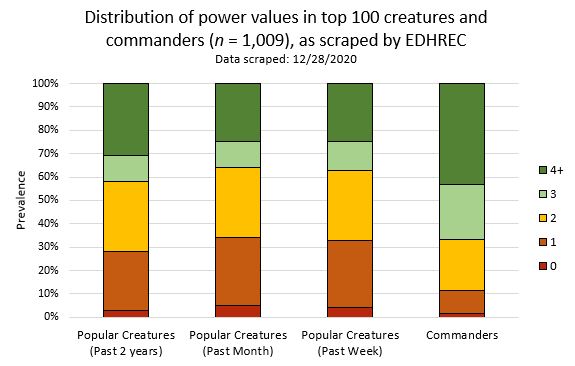 The good news is, it looks like most commanders have a power greater than one (~90%). Yet, these don’t even cover the many 1/1 tokens these commanders can produce (looking at you, Thalisse, Reverent Medium).

The bigger problem, of course, is that even after all this work, we are getting in for one measly damage when our opponents have cumulatively 120 life. Even if our opponents chip away heavily at each other, or tap their Ancient Tombs and storm off with Bolas’s Citadel and Reckless Abandon, chipping in for one damage just isn’t going to cut it. In a 100-card singleton format with less than 15 total cards to choose from, building around Skulk simply isn’t going to work well, at least not until we return to Even More Shadows over Innistrad (or some other LGS-circumventing product…). We have to think Inside Out if we want to make Skulk work.

Another Brick in the Wall Tribal

We want to have smaller power than our opponents’ creatures, but still need to scale that into damage somehow. So why not deal damage with our toughness instead?

High Alert, Rolling Stones, Gauntlets of Light, and Animate Wall mean we can begin swinging in with the most imposing Skulkers of all — Walls. What Walls lack in power they make up for in toughness, which is perfect for us utilizing Skulk evasively, but scaling damage in a more impactful manner. Doran the Siege Tower (451 decks, 63.34%) and Ikra Shidiqi, the Usurper-variant decks have long used Behind the Scenes to make their Treefolk, Walls, and other big-booty brethren sneakily punch through.

But since Skulk is primarily limited to Esper colors, let’s think of who we can use to enable a Skulk + Wall tribal monstrosity. Someone who can also fetch up our High Alert, Rolling Stones, or Behind the Scenes consistently…oh I know!

Look, we’ve probably all played against one of those Zur decks. Heck, by now many have even played against “it’s not that Zur deck, it’s Zur cycling with Astral Slide!”, which has become its own other Zur deck at this point. I’m usually not an advocate for commanders that come with a lot of memory-laden baggage that screams “remove me,” especially when we have such an under-supported strategy that likely won’t hold up to those people who just won’t trust you. But on the other hand, we kind of do need a powerful commander in Esper colors to get our otherwise janky strategy rolling. The fact that he’s a 1/4 is gravy for our Skulk toughness matters build.

Pleased to Meek you

Aside from Zur, the Enchanter to fetch pieces for our Walls to attack, he can grab things like Blessing to help our other Skulkers boost in power after evading blockers, as well as Battle Mastery and Duelist’s Heritage to scale damage even more, or removal pieces like Grasp of Fate. We’ll be running a slew of Skulkers (at least, not the actively bad ones like Pale Rider of Trostad), as well as Odric, Lunarch Marshal to help spread Skulk to our Walls in a pinch.

Infinite Hourglass and Thran Weaponry are some neat (albeit janky) options to try and get Skulk to work, as they provide an anthem effect to all creatures, so our smaller guys can grow in power, but still meet the threshold for Skulk. Fortified Area was designed with blocking in mind, but if our Walls can attack, things get funny, fast.

Meekstone, Retribution of the Meek, and Slaughter the Strong can help cull our opponents’ creatures if they get too out of hand, while minimally affecting us.

Finally, Charix, the Raging Isle can be our ultimate blocker and closer, as we can swap his power and toughness after having him Skulk through, either through his own ability or through a Merfolk Thaumaturgist, assuming we have no High Alert out. Just keep track of your Islands and anthems so he doesn’t die after swapping!

Similarly, Angel of Destiny‘s lack of power and high toughness will actually come in handy here. Even if just Zur the Enchanter and Angel of Destiny attack, Zur’s attack trigger can fetch out High Alert, which means we will be gaining Zur’s four toughness in life points, and 12 from Angel of Destiny‘s, for a total of 16. Assuming we haven’t lost too much life, there’s a real potential for Angel of Destiny to be a win condition here, what with all the toughness matters and evasion.

Putting it all together:

You’ll notice that I did not include arguably the best Skulk creature, Glenn, the Voice of Calm. Frankly, it’s an awesome card and something I personally would build, if it weren’t solely made available the way it was, and the current price tag is nothing to ignore either. But I’m curious: of those of you who did purchase the Secret Lair, have you built Glenn? If so, have you found success or any neat tech to making Skulk work in the command zone?

For everyone else, have you had luck with Skulk, and if not, why? Do you hope we get more support for the mechanic in the future? Sound off in the comments below!