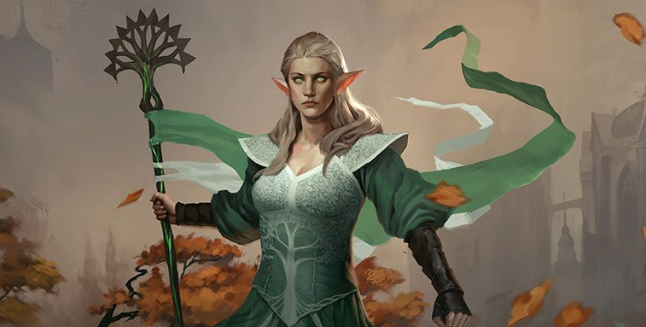 The day is here, everyone! It's time for fellow green-white enthusiast Mason Brantley and I to let our collective jimmies rustle to the maximum. It's the Selesnya review for the upcoming set of Guilds of Ravnica! Whenever white teams up with green in this Magic: the Gathering world, you can bet your dice bag I'm paying attention, and this set is no different.

I'm super excited, so that's all the introduction we're going to do here. To the cards! 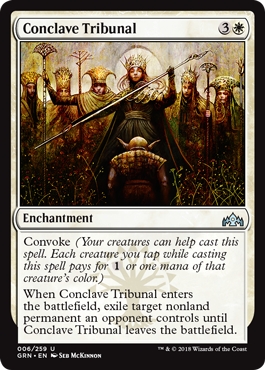 This is super interesting to me. We had Devouring Light as a removal spell featuring the Convoke mechanic. That spell just hit an attacking or blocking creature, but this new removal option acts as an Oblivion Ring, which is pretty great. Since this hits a nonland permanent, it's probably going to be worth a slot in lots of decks. Any go-wide token deck will probably find a space for this since it can take advantage of your vanilla 1/1's by allowing them to contribute to the casting cost. Banishing Light is a good parallel for this card, which is currently played in around 9,000 decks, so you can probably expect this to show up in at least that many decks moving forward. This is the type of role-player card I love seeing. 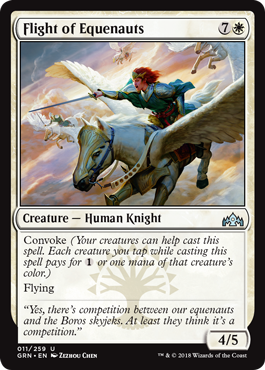 This one... I'm not sold on. Convoke is great at getting around high casting costs, but for a flying 4/5 I just don't think it's worth the slot. It'll probably be a Brawl card? However, (insert Brawl joke here). Not bad, just not for us. 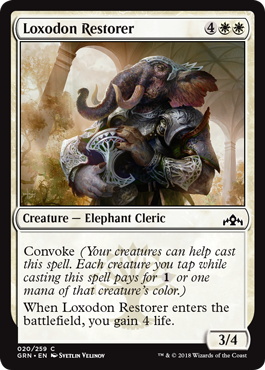 Convoke is the only thing that makes this creature worth running. Lone Missionary is played in next to zero decks. Well, under 200 actually, but the point stands. Flicker decks like the lifegain, so Brago, King Eternal and such decks won't mind a half decent blocker that doesn't actually cost as much as it looks like. If you need a budget lifegain effect, this is fine for the mono-white decks that like Ajani's Pridemate. 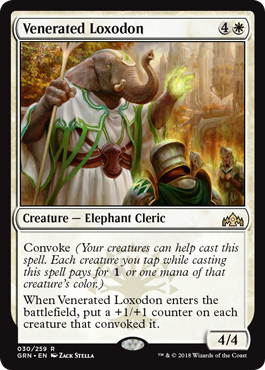 Man, this thing can be such a massive beating. A mana-free permanent anthem is sure to be worth a card. When you consider Selesnya decks excel at Doubling Season effects, your board will get real big real quick. Look no further than decks that run Hardened Scales. And of course, we have to discuss the obilgatory Atraxa, Praetors' Voice, though really any other +1/+1 counter deck can take good advantage of this ability. I'd suggest pairing it with Ivorytusk Fortress, or at least casting it when you have a great number of creatures in play, so you don't feel vulnerable to attacks after Convoking this Elephant into play. I expect it won't be much beyond a sub-dollar rare, and won't see a great deal of play, but it's fun and fits Selesnya exceptionally well. This is no Cathars' Crusade, but it's exactly the type of card Cathars' Crusade likes to see. 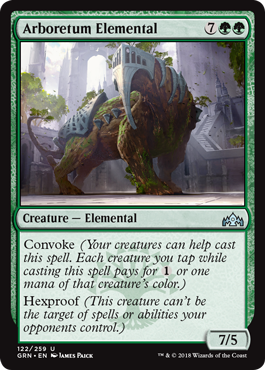 Hexproof is never a joke, and cost reducers mean that your non-mana producers now produce mana... kinda. This is still pretty expensive but a big fat hexproof stomper monster isn't anything to laugh about. It just may not be much to write about either. Bogle/Aura type decks will think about finding a spot for this I suppose, at least the budget ones. 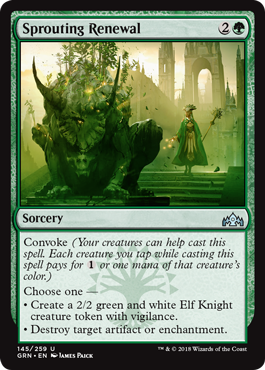 The only reason I bring this card up is because, lots of time, Convoke is just that powerful. 99% of the time you're going to use this spell as a Naturalize that doesn't need any lands to cast. Making a 2/2 Knight token probably won't be worth 3 mana regardless of whether you tap mana or tap creatures for this. A surprise Disenchant when you're otherwise tapped out can make things interesting mid-combat or after blocks have been declared. If you're in green and you're playing Naturalize, then you probably could consider this an upgrade worth the extra mana for its flexibility. 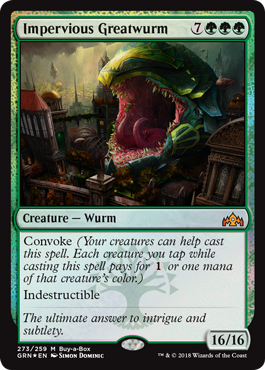 Impervious Craw Wur... I mean Impervious Greatwurm is an ENORMOUS creature and hard to kill. Unfortunately, however, there is so much exile-based removal in EDH that it probably won't matter a great deal. If you have any ways to give this evasion or trample, it gets much much better, but as is, it's going to get chump blocked alllllllllll day. I do have visions of putting this in a Ghalta, Primal Hunger deck to cast Ghalta for mega cheap, though. Sacrificing the greatest of Wurms to Momentous Fall or Greater Good aren't the worst ways to take advantage of the massive body on this creature though to let mono-green decks draw a fistful of cards or two. And I'm sure my cohost Joey Schultz from the EDHRECast is strongly considering adding this to The Mimeoplasm deck for all those juicy counters! So really, if you want to buy a box and snag one of these, go for it. It's not going to be unbeatable for most decks, but I won't blame you for running it either. 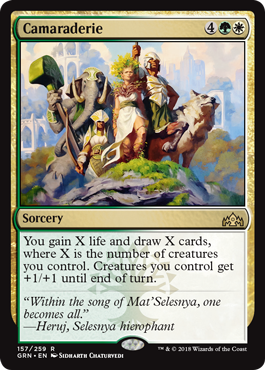 Rishkar's Expertise Lite, if you ask me. For what Mr. Rishkar has mastered when it comes to big creatures to draw, Camaraderie does so for lots of creatures. The +1/+1 pump seems half tacked-on to incentivize folks to play it, but even then, most go-wide decks that would want this already are going to have ways to pump the team up (such as with Pathbreaker Ibex effects), so that's just gravy. Rhys the Redeemed and the new Emmara, Sould of the Accord decks will probably enjoy this as a way to refuel their hand after playing it out the first or second time. Solid add and will see a fair amount of play in token decks. 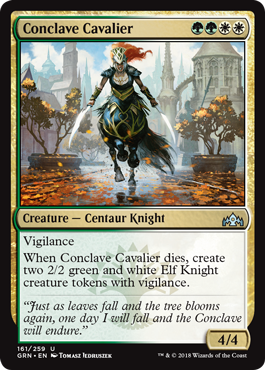 I like this cycle of mana-intensive uncommons. If you're playing a Doubling Season effect, this gets way interesting. Now I know you're rolling your eyes super hard because literally everything goes well with Doubling Season, but the point still stands, getting four 2/2's isn't a bad deal. It's a decent beatstick that token decks could use if they need insurance against the many board wipes that ruin all their fun.

Speaking of cycles, I really like the Guildmages as well. Only being able to use one ability per turn (outside of untap shenanigans) does kind of suck a bit, but I still like the array of abilities here. Giving your team or just one Impervious Greatwurm trample to push damage through is rarely going to be not worth a card. On the other hand, six mana to make a 2/2 is... lacking.

Emmara, Soul of the Accord 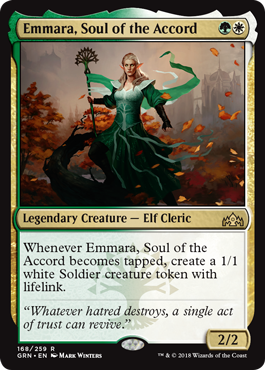 On our set review of Guilds of Ravnica for the EDHRECast I mentioned how Emmara could be a great budget option for folks that want to run a Rhys the Redeemed deck. I also mentioned that I think the new Emmara's EDHREC page is going to look a lot like what Mirri, Weatherlight Duelist's page should look like: lots of tapping effects like Glare of Subdual and Cryptolith Rite, with smaller creatures to snowball out of control. I very much enjoy Emmara, Soul of the Accord and will most likely find a way to sneak her into any decks that make sense. 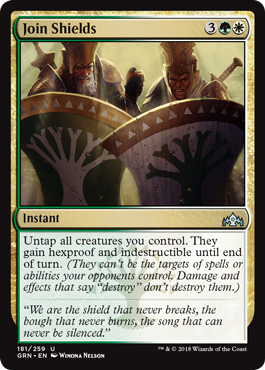 If you don't want to spend the money on a Heroic Intervention, this is an alright substitute. Not great, but not bad either. Untapping your creatures will definitely surprise some of your buddies as they try to alpha strike. This is primarily going to be a cheap version of the solid and commonly played Heroic Intervention, and that's a perfectly good thing. 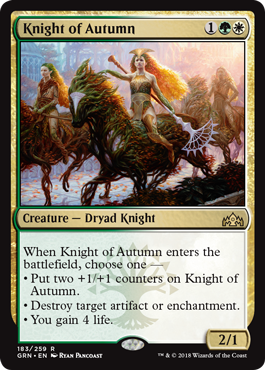 Swiss Army Knight, as I'm going to affectionately call this one, does everything I want my utility creatures to do. It's a 4/3 beater, a Reclamation Sage if you need, or it's even a Kitchen Finks when you need to not die. If you flicker this to reset her, she's getting even more value than you're going to get normally. This card is wild, and without exaggeration, it will go in every green/white deck I have. There's not going to be a situation where this isn't worth the mana. This is the type of card fellow EDHRECast member Dana Roach should love. High floor, consistently good, and you will rarely be sad to see it. 11/10, should play.

March of the Multitudes 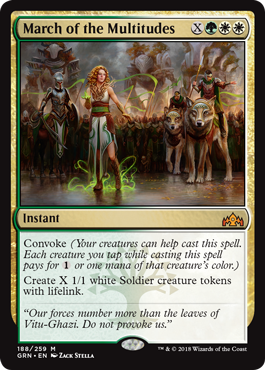 Oh. My. A-gosh. Insanity on a card. I love this so much too. I know I'm gushing about every freaking green/white card but it's just what I do. I love the what this set is doing for Selesnya decks. All I have to say is... well, I already said it, so I'll just leave this here:

I want to secure the wastes with a cathar’s crusade and a doubling season out. Then in response to all the crusade triggers, convoke the table for this... 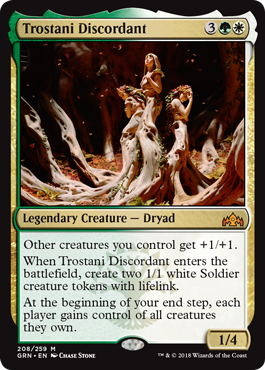 I'm not really sure how I feel about the new Trostani. I like that she makes a small army when she comes down, but the last ability throws me off. Trostani Discordant probably won't get as many decks to her name as her predecessor namesake but "anthem tribal" might be a thing, I guess. The last ability seems odd, but then again Homeward Path is played in a fair share of decks, so play it if you want. Just don't be surprised if there are better legendary options for whatever way you decide to build this one. 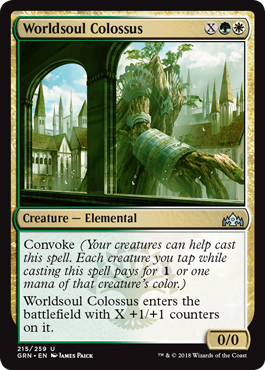 X/X creatures aren't good very often, but this one has potential. I wish all these Convoke creatures had flash, but then that would make them all way too good. Maybe I need to stop playing so many Chord of Callings in my decks... their instant speed has spoiled me.... I'm sad to admit that I think Selesnya got the short end of the stick when it comes to the new split card cycle. I don't really like either side of this one. There are much more efficient protection effects, so Assure doesn't assure me, and the other half is just expensive, so there's too much assembly required for Assemble. Some people will probably play it regardless, because it's a toolbox of a card, but it's super blah. Unfortunately, that's just sometimes how it goes.

Green and White All Night

Sorry to leave this otherwise sterling review on a low note! Selesnya is doing everything I love with this set, and I'm amped to march my multitudes all over my opponents' boards. I'm incredibly excited about the new cards with Guilds of Ravnica. What are your favorite new cards? Is there anything I missed that I shouldn't have? Let me know in the comments!