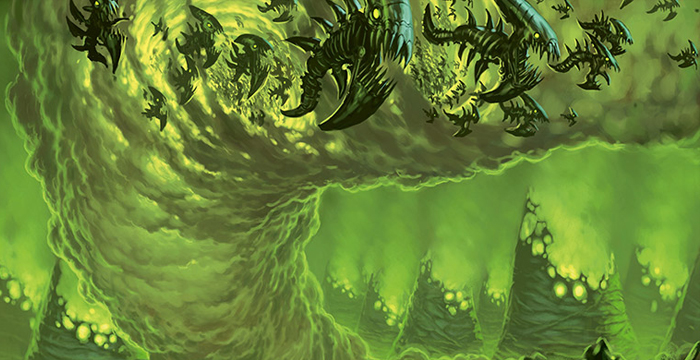 Hello and welcome to another installment of Lore Seeker, an article series devoted to the legendary creatures to whom Wizards of the Coast forgot to give a story. I’ll guide you through each fragment that makes up a legendary creature and finally give them a little extra background love. This time around we’ll be highlighting Garza Zol, Plague Queen.

Garza Zol was a Vampire that ruled over Krov, the capital city of Kjeldor on Dominaria, during the Ice Age. She allied with Heidar, Rimewind Master during the Thaw, a time near the end of Dominaria's Ice Age, but later had him assassinated.

Garza Zol lived through the Ice Age, so you know what that means: snow deck! Time to make use of all those snow-matters cards, like Heidar, Rimewind Master. Modern Horizons has recently reprinted the basic snow-covered lands, so those are an auto-include. Marit Lage's Slumber gives us early-game card selection and a late-game threat, and as long as we're talking about Marit Lage, I'll also mention that we're running the classic Dark Depths and Thespian's Stage combo. Dead of Winter provides a cheap and effective board wipe, and Withering Wisps fits in well with a package of cards I will touch on in card analysis.

During the Thaw, bacteria and disease that was once frozen and dormant started to awaken in the warmer temperatures. The Ice Age lasted for over 500 years, long enough for the population of Dominaria to lose antibodies for these diseases. These conditions lead to a plague that proliferated through Krov, giving the more resilient races like Vampires and Zombies an extreme advantage. Garza was thus able to take advantage of her immunity, and of the weakened state of those more susceptible to the plague, to build her monarchy.

Pox is a perfect representation of the disease. There are a number of cards that have a similar effect, though Pox is the best version. 1/3 of this deck will be devoted to casting spells like these to quickly deplete everyone's resources.

The secondary gameplan, and the second representation of the plague infecting Garza Zol's domain is, of course, Infect. Pox is a great representation of the players contracting some nasty disease, but Infect affects both creatures and players. These two paths to victory (pox and Infect) seem to be at odds, but more consideration revealed the important through-line: this deck effectively changes everyone's starting life total. Whether we give Garza Zol Infect or not, she will be able to consistently take large chunks out of our opponent's remaining life.

The final representation of the plague is Pestilence, which is defined as a fatal epidemic disease. This suite of mass pingers will keep the chump blockers off of the board while creating an acceptable amount of casualties on our side of the board. Pair this effect with Silverclad Ferocidons and we end up with a mini-Pox for our opponents.

"Grixis is a world where the only things found in abundance are death and decay."
- Fleshbag Marauder

Blue: strive for perfection; you can be whatever you desire.

Black: power at any cost; morality has no sway over decisions.

Red: do what you desire; freedom of action above all else.

Grixis (blue, black, and red) will do whatever it wants, however it wants to do it, in order to achieve its goals. Garza took advantage of the plague that ravaged her city and weaponized it. Biological warfare is a key strategy; sending infected individuals into enemy territory, experimenting on them, finding ways to increase the potency of the disease that has ravaged her own people, then subjecting her foes to the same ordeal. This art is rather goofy. Garza Zol is a classic Gothic/Victorian-looking Vampire with some Nordic influence. An extremely impractical dress for the blizzard she is trudging through is surrounded by a large fur-lined cloak, and on top of everything are some wicked shoulder pads that make even the most successful 80's pop singer envious.

As stated previously, Garza's vampirism is what gave her the much-needed edge during the Thaw. It would have given other Vampires that same edge and that would be a large threat to Garza. She is selfish and brutal in her rule, so she systematically destroyed competing Vampires while taking control of Krov. Therefore, other Vampires will not be making an appearance in this decklist.

As with most every popular creature type, Garza Zol's EDHREC page shows a primarily tribal theme. I have noticed a trend of somewhat uninspired deckbuilding decisions in the statistics on EDHREC. It seems that when people are unsure of what to do with a legend, they default to tribal synergies. This is not necessarily a bad thing; Garza is a particularly aggressive creature and benefits quite a bit from lords and anthems. I simply want to challenge you, dear reader, to dig a bit deeper! A 5/5 flyer with haste for seven mana is a decent enough rate. Garza holds her own against many similarly-costed Dragons. Tacking on the ability to grow when she's blocked by something smaller, or draw a card if your opponent decides not to block, adds a ton to her power level. An amazing support mechanic for Infect is Proliferate, so this deck contains plenty cards with that effect. If we're able to get the first counter onto Garza, she will continue to grow without the caveat of having to kill a creature.

You're going to need a lot of black mana with this deck: 65 total black pips on the cards in here means that getting Urborg, Tomb of Yawgmoth is somewhat important and, unfortunately, a necessary inclusion. The most expensive card is Skithiryx, the Blight Dragon, and while it's not necessary to make the deck function, it is a brutal threat and I would personally deem it worthy. Work on getting a poison counter on everyone in the early game, keep creatures off the board, bide your time, and grind out an eventual Proliferate kill. If Infect doesn't work out, you'll be able to close out the game with your commander. It may therefore be wise to hold off from casting Garza until very late in the game; you want to wait for your moment with her, as you don't want her to die very often.

Plague your playgroup with this spicy Grixis build. You will be reliant on others to remove permanents other than creatures, so choose your first Infect target wisely. This deck cannot hold up in the archenemy position, but can keep our opponents directed at each other to create some exciting and tense games. If you're not a fan of cackling like a madman, watching the joy drain from your opponent's eyes, and twiddling your fingers like Mr. Burns, this is likely not the deck for you.