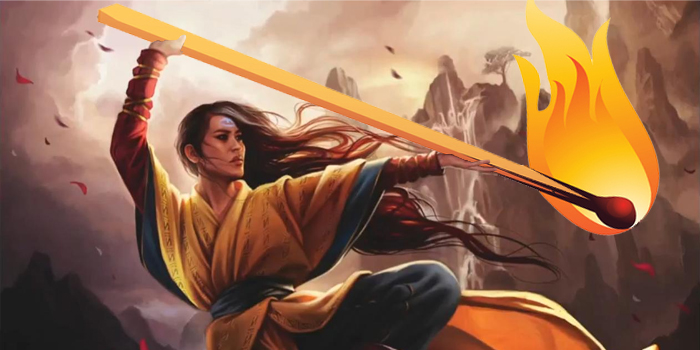 We Didn't Start the Fire

We're coming in hot with another installment of Power Sink, the article series where we take the commanders that get players heated and make them cool their jets. This time we're skipping the newer hotness to take a look at a commander that's been making people sweat since 2014: Narset, Enlightened Master.

Narset ranks 78th on EDHREC for most-built commanders, with 1,795 decks. She's the fourth most popular Jeskai commander, trailing some more recent arrivals to the scene who we will most definitely be discussing in future articles.

Narset has had a long time to develop a bad reputation and her 2.07 salt score, and many players are happy to tell you stories of how the got burned playing against her. Her main appeal is her ability to cast, for free, any noncreature spells from among the top four cards of your library each time she attacks. While having a 3/2 body for six mana would have been a decent drawback, her native hexproof mitigates that quite a bit, as opponents need a board wipe to remove her. First strike is the cherry on top, allowing her to come out on top of far more tussles than you would expect. Finally, her colors give her some of the most powerful noncreature spells in the format, along with excellent protection spells and haste enablers to stoke the engine that much faster.

Let's take a look at her average deck to see what gets players steamed about her.

Unless you've been playing Commander under a rock, you probably already know what the problem in the average deck is. It contains a whopping 11 extra turn spells, along with a sprinkling of extra combat spells. Alongside top deck tutors like Mystical Tutor and Long-Term Plans, it's fairly simple to chain extra turns together as long as you can find a profitable attack, which is a lot easier with the removal and evasion provided by the color combination.

In case free spells off the top of your library isn't enough, Enlightened Tutor is there to put Omniscience on top of your deck just in case that Expropriate gets stuck in hand. Players tend not to like playing against extra turn spells in general, and extra turn decks can be especially frustrating, since you might be left sitting there smoldering while the turns player takes 45 minutes to put together a win.

Aside from extra turns, Narset can be responsible for other strategies that can leave opponents feeling burned. Her ability can cheat costs on planeswalkers, making her a solid choice for a Superfriends deck. During a darker time in my Commander career, I built a Narset chaos deck just to grief the table. If you think 45 minutes of waiting through extra turns is bad, try waiting through that much time trying to resolve one spell.

What I found unfun playing with and against this commander was the feeling that the game was over as soon as she attacked even once. So, for this Power Sink, we've cooked up a spicy dish that will avoid that experience and still bring the heat.

In case the section title and temperature puns didn't make it abundantly clear, we're building a burn deck. Burn is a staple of every other constructed format, but it tends to struggle in Commander due to the high life totals and multiplayer environment. Narset is still going to be granting a ton of advantage, but it's going to be mitigated by the fact we are using a lot of one-shot effects. We're also not using any extra turns or extra combat spells, so we can tell our opponents to chill out when we bring a Narset deck to the table. Let's peek in the oven and see what's baking .

Direct damage is our primary win condition, and we're running 21 sources of it. In addition to simple effects like Lightning Bolt, we have a bit of a 'mana value matters' theme going on in our burn suite. Torrent of Fire deals some solid damage when our six-mana commander is out. Riddle of Lightning helps us stack the top of our library for Narset on top of its damage potential. Both Kaboom and Calibrated Blast are a little random, but we have a lot of high cost cards in the deck we can hit. Speaking of random, Mindblaze is a cute little card that can deal eight damage if we can name a card in their deck. Most players run Sol Ring, and the ones who don't can't help but brag about it. You can also check EDHREC to get an idea of what your opponent might have.

We've also got some burn spells that gives us a little additional utility. Prismari Command is an incredibly versatile spell that can provide ramp, card filtering, or removal if we need it. Molten Psyche and Khorvath's Fury can help us get rid of cards we don't want. In addition to damaging our opponents, Fiery Confluence and Slagstorm can also clear the board of low-toughness creatures. Unfortunately, that's likely to include our commander, but sometimes that board of tokens has to go.

If all goes according to plan, we'll be going through a lot of our deck. Of course, we don't want to to burn out, so we have a few effects to shuffle our graveyard into our library. Elixir of Immortality helps our defense with a bit of lifegain, Midnight Clock serves us as a mana rock, and Emergency Powers gives us a chance to drop one of our expensive permanents for free (though not when it's cast during combat).

Even with Narset free-casting cards for us, we're going to need a little extra kick to have a chance at taking down three opponents. Luckily, there are plenty of noncreature cards we can free-cast with Narset that will help us achieve this goal. Normally I try to avoid cards over $10, but Fiery Emancipation is just too good here, and it's the only damage multiplier we're using that doesn't work against us. We'll even use Furnace of Rath and Dictate of the Twin Gods, even though we may get burned by them.

We can also copy all these spells we're casting for free by using Swarm Intelligence and Double Vision. While we aren't using many (or really any) other creatures, we have Shark Typhoon and Metallurgic Summonings to make tokens, which gives us some protection and helps us get in for more combat damage.

Finally, we have a few ways to get even more out of Narset's attack trigger. Strionic Resonator will let us exile and free-cast another four cards, while Wild-Magic Sorcerer lets us Cascade into another spell if we cast from exile. I also like Sorcerer Class, which singes each of our opponents every time we cast an instant or sorcery.

This deck needs its commander to keep the fire going, so we need to take steps to keep her alive. Hexproof does a lot to keep her on the field, but it doesn't really help when it's time for her to mix it up in combat. We're using Dragon Breath largely for the haste, but also because the firebreathing effect in conjunction with Narset's first strike improves her chances in combat. Aqueous Form, Rogue's Passage, and Access Tunnel make her unblockable, and one of them will even give us the added bonus of a scry, potentially giving us more accuracy from her attack trigger.

Ebony Fly is a mana rock we can animate to give our commander flying. We're also using a few counterspells for protection (and to make sure any problem spells go out in a puff of smoke). Mystic Confluence, Insidious Will, and You Find the Villains' Lair all have additional modes we can use even if we exile them off Narset's ability and don't need to counter something.

Through the Fire and Flames

It's about time the flame died down on this piece. Narset is an interesting, open-ended commander that unfortunately falls victim to her reputation, and I hope I was able to spark some new ideas for her. Narset Burn was a fun deck to explore, but there are a few other interesting decks I was able to find: fellow EDHREC writer Angelo Guerrera wrote an article on a Jeskai Enchantress deck that was originally led by Narset, and there are plenty of directions to go with that archetype. Similar to the gumball deck from my first article, Original Ross from the EDHRECast patron Discord shared his Narset "Tic-Tac" Human tribal deck, which uses only cards that cost ten cents or less!

Let me know in the comments if your passion for Narset was reignited, and of course I would love to hear about any other commanders you think need to be put on ice!