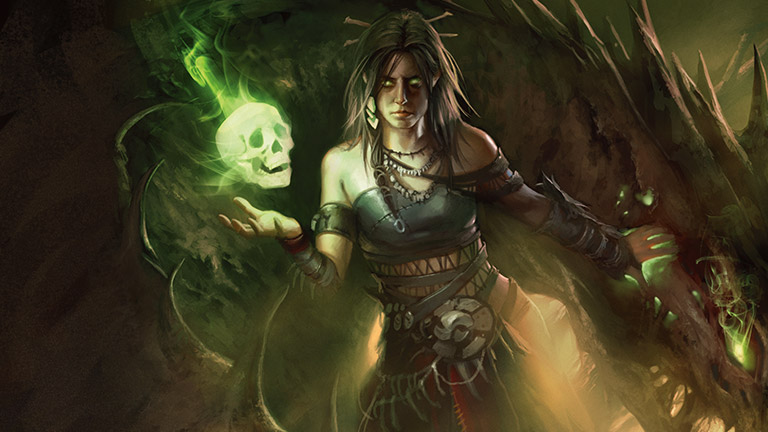 Hello friends and necromancers, welcome back to EDHREC and our continuing biweekly column, Non-Basically Speaking, the series that strives to identify non-basic lands that should be considered valuable staples or hidden gems based on their visibility on EDHREC.

Today we dig about six feet down and discuss one of EDHREC’s most popular commanders Meren of Clan Nel Toth. Meren has been raising the dead from her owner’s graveyard since she was introduced to the Magic community in the Commander 2015 preconstructed deck, Plunder the Graves. She quickly became an EDH favorite thanks in part to her ability to generate Experience counters from your creatures living and dying and living again.

So what makes Meren so tantalizing to build? Is it the grindy toolbox control? The ability to cheat creatures into play from the graveyard? Or is it the methodological hum of the recursion engine that generates the sweet taste of value? The answer? Yes. All of this and more.

A key strategy for piloting a Meren decl is to appear the lesser threat by durdling about. The early Meren game is usually built around establishing resources and using sacrifice effects, like Fleshbag Marauder (71% of 1868 decks) and Dictate of Erebos (62% of 1868 decks), to control the board. It takes time to set up our graveyard for plundering, so patience is definitely a virtue. We want to nonchalantly establish our recursion engine and discourage our opponents from attacking us. Removing the board of threats or protecting our life total with the elusive Spore Frog (45% of 1868 decks) are tactics we may need to employ.

Crypts are for Closers

How does Meren win the game?

Meren’s win conditions vary from deck to deck. Life drain is a viable option as many kitchen tables have had their life source emptied via Jarad, Golgari Lich Lord (60% of 1868 decks) or Kokusho, the Evening Star (28% of 1868 decks). The threat of combo also looms. There are quite a few potential game-enders or soft-locks to choose from. Mikaeus, the Unhallowed (37% of 1868 decks) and Woodfall Primus, for example, definitely force our friends into submission. Tokens can also be an end goal. In Meren’s House of Recursion creatures like Grave Titan (42% of 1868 decks) or Avenger of Zendikar (39% of 1868 decks) can set us up with an army of tokens wanting to be all that they can be and swing in for the big win. In my playgroup, my son Steven has played Meren for a few years now. He looks for Gray Merchant of Asphodel (32% of 1868 decks) and Kessig Cagebreakers (22% of 1868 decks) to bring home the win.

Non-Basic Shovels to Dig the Graves

By choosing Meren of Clan Nel Toth as our commander we essentially decided that sacrificing our creatures for value is gonna be our thing. Ashnod’s Altar (56% of 1868 decks) and Viscera Seer (48% of 1868 decks) are fantastic options with free activation costs that are well suited for sending our dudes to the yard. There are also groovy options, like Evolutionary Leap (46% of 1868 decks), that can really get our deck churning but do cost a few drops of mana to activate. During deck design, it is imperative to include a healthy portion of viable sacrifice outlets into the build to ensure that Meren is running at a high level of efficiency.

Given the premium placed on sacrificing our creatures, it is time to take a look at some non-basic lands that add redundancy and serve as emergency sac outlets. High Market (82% of 1868 decks) and Grim Backwoods (65% of 1868 decks) are cemented at the top of EDHREC’s recommendations thanks in part to their inclusion in the Plunder the Graves preconstructed deck, but also because they get the job done. Granted, Grim Backwoods requires a bit more of our resources than High Market to to accomplish the goal, but hey, we gotta do what we gotta do.

Let’s not stop there. While High Market and Grim Backwoods may be the high percentage Signature Cards on EDHREC, Phyrexian Tower (19% of 1868 decks) is arguably the best option of the three. By tapping the Tower and sacrificing a creature we add two black mana to our mana pool. A nifty ability that serves as a cog in the recursion machine while providing us with extra mana to fuel our spells. The only issue with Phyrexian Tower is the scarcity and monetary cost. Phyrexian Tower has only been printed by Wizards one time and that was nearly two decades ago in Urza’s Saga. However, you can still snag Phyrexian Tower on Card Kingdom for about $30-$35. If you’re dedicated to Meren, this is well worth the investment! So here we are. The point in the article where we take a perfectly good deck flowing with synergy and throw something totally off-the-wall into the mix. How about we add a 20/20 Flying, Indestructible creature to our list of win conditions? Dark Depths is a Legendary Land originally printed in Coldsnap that enters the battlefield with 10 ice counters on it. At anytime we can pay three generic mana to remove an ice counter. Once all ice counters have melted away we sacrifice Dark Depths and put a 20/20 flying, indestructible black avatar token named Marit Lage onto the battlefield. Now our opponents are in big, big trouble!

With our 20/20 monster on the battlefield we can smash our friends in the face a few times for catastrophic damage. We could also use the power of Marit Lage combined with Jarad, Golgari Lich Lord to drain the table for half of their starting life total. An effect that may very well have the table shuffling up to play again. Let’s be honest folks. Paying 30 generic mana over the course of a game to remove ice counters is inadequate for what we would like to achieve. We simply do not have the luxury to dump mana into it three at a time. So let’s fire up the incubator and defrost this ice cap! Here are a few cards that speed up the process and also provide amazing synergy with our commander, Meren of Clan Nel Toth.

Thespian’s Stage is a colorless mana source that can transform into a copy of any other land on the table. If we use this ability to copy Dark Depths, the legendary rule will trigger and we can opt to send the original land to the graveyard. Thespian’s Stage becomes the new Dark Depths, but since it was already on the battlefield, it will be barren of ice counters. We then sacrifice our Thespian Stage version of the Depths and put our Marit Lage token onto the battlefield. Booyah!

Why save this type of power for the end game? Meren has plenty of tutors that will help us set our devious plans into motion. Let’s look at Tempt with Discovery, for example. We could put on a suit and tie and bring politics to the kitchen table. Why not talk our buddies into digging for some real estate with a Tempting Offer? All we need is for one of our opponents to be Tempted to get both Dark Depths and Thespian’s Stage onto the battlefield.

Here’s another well-documented trick. We could sacrifice Vampire Hexmage to remove all of the ice counters from Dark Depths. It doesn’t get any easier than that. The Hexmage-Depths combo is another scenario that could very well materialize within the first few turns of our game. Vampire Hexmage also shows her value with Meren. She can obliterate Planeswalkers or liquefy threats that are bloated with +1/+1 counters. Most importantly, she can be sacrificed at anytime with Meren on the battlefield to tally another Experience Counter.

If you haven’t already noticed, there is one major drawback to running the Dark Depths combo in our Meren deck. It does not tap for mana. Without the combo pieces and tools we need to extract Marit Lage, Dark Depths has little value to us on the battlefield. We can alleviate the drawback by including Urborg, Tomb of Yawgmoth (47% of 1868 decks). With Urborg on the battlefield our Dark Depths acquires the characteristics of a basic swamp and is able to be tapped for a black mana. But let’s not stop there! Why not juice up the deck by also adding Cabal Coffers to the mix?

With Urborg, Tomb of Yawgmoth making every land a swamp and Cabal Coffers producing mana equal to the number of swamps we control, we are able to summon forth a flood of bubbling crude. This overflow of black goo will aid our cause and help cast some of Meren’s bigger threats, like Sheoldred, Whispering One (52% of 1868 decks), with plenty of mana left over. Do we have our Thespian’s Stage in play? How about we copy Cabal Coffers and use them together to create a geyser of mana that ends the game with an explosive Exsanguinate?

There is no doubt that Meren of Clan Nel Toth has rightly earned her position as one of the most popular commanders of all time. She lends herself to an in depth deck strategy capable of grinding out victories through synergy and control. While Dark Depths could be included in other EDH decks, I felt that Meren’s ability to utilize recursion (like Eternal Witness) and tutors could provide another tactic for Meren that leads to epic moments in future Commander battles.

That Last Ounce of Earth

That’s all I have for you today my EDHREC friends! I’ll post a sample decklist below. What are your thoughts on Dark Depths in a Meren EDH Deck? Have you lived the dream and punished your friends with Marit Lage? What are some of your experiences playing with or against Meren? What flavor ice cream do you think she likes? Let’s discuss in the comments below!

On to the next!
—wallyd