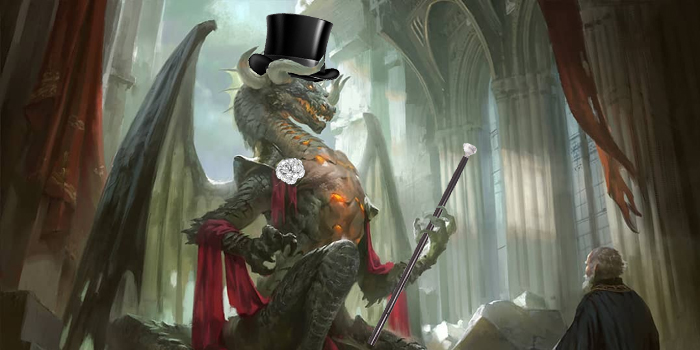 Ladies and gentleman, welcome to tonight's production of Power Sink: The Musical (not actually a musical), the show (article series) where we take those commanders whose performance is just a little over the top and help them give the audience something more understated. The star of the show this time is none other than Korvold, Fae-Cursed King.

Korvold has top billing in nearly 5,900 Commander decks according to EDHREC, making him the #2 commander on the site. Korvold has it all: a chiseled jawline, built-in card advantage, native evasion, and stats that get inflated faster than his ego. While Korvold is contractually obligated to work only in Jund, that suits him just fine, since the color combo has the finest in sacrifice fodder, death triggers, and reanimator effects, along with top-shelf ramp and tutor options.

That card advantage is the heart of what makes Korvold a singular sensation. He can skimp on the card draw in the 99 and jam-pack his deck with sacrifice effects to trigger his own draw effect. The card draw alone puts Korvold over the top, but he also gets larger with every permanent you sacrifice, so he can also close out the game for you on top of all the value he generates. Korvold has even been a headliner for a few cEDH decks. Let's take a look at Korvold's average deck to see what the hubbub is about.

As expected, we see a lot of self-sacrificing permanents on the list. The mana base is chock full of fetch lands, including "lesser" fetches, like Evolving Wilds and Jund Panorama, while Ramunap Excavator and Crucible of Worlds are there to get more use out of all those lands. Korvold also has quite a few ramp cards, like Sakura-Tribe Elder and Harrow, that require a sacrifice.

Classic sacrifice outlets, such as Ashnod's Altar and Goblin Bombardment, are present here to make use of sacrifice fodder creatures, like Reassembling Skeleton and Scute Swarm. To capitalize on all this death, there are even cards like Bastion of Remembrance and Mayhem Devil.

Making Treasure tokens is one of the stronger things you can do in a Korvold deck, since they give you mana for all those cards you're drawing. Considering that the average deck contains 10 cards that create Treasures, it seems like most people agree on the power of this interaction. Korvold clearly loves to Revel in Riches, and we've all read about his whirlwind romances with Dockside Extortionist and Pitiless Plunderer in the papers. He also appears to have something going with up-and-coming Adventures in the Forgotten Realms starlet Old Gnawbone. With all of this going on, one has to wonder if there's ever a point that Korvold isn't drawing cards.

So, is making a fairer Korvold deck the impossible dream? I think not, and I've got quite the off-off-Broadway production for him.

The King and I

We've made a few changes to the script to keep the power level down for this deck. This is Power Sink, after all, and we can't just say "Anything Goes" with a commander like Korvold.

Our first rule: no free sacrifice outlets. Anything we use to make a sacrifice needs to tap to do so. This keeps us from sacrificing large portions of our board at will for huge swells of draw. If we want that, we'd have to commit several of our outlets to the board. As an added hurdle, many of our sacrifice outlets are creatures, so we'll need to wait a turn to use them without a haste enabler.

The second rule is absolutely no Treasure production. Korvold won't be Puttin' on the Ritz for this number.

Finally we cut all the scenes with Dictate of Erebos and similar effects, as they weren't conducive to audience (opponent) participation.

Before we talk about how we're going to sacrifice permanents, let's talk about what it is we'll be sacrificing. Korvold can eat any permanent, but it won't do to keep giving up our cards even if we get new ones, so we're using a few token-producers. Dreadhorde Invasion and Goblin Kaboomist come down early and give us a token every upkeep. Sek'Kuar, Deathkeeper and Anax, Hardened in the Forge pay us back every time we lose a nontoken creature. In fact, Sek'Kuar would make a great understudy if the people you're playing with have creative differences with Korvold.

Gilded Goose fits into our ramp package and can make us additional Food tokens if we want. My personal favorite token-maker in the deck is Iridescent Hornbeetle. Korvold alone is great at getting +1/+1 counters, and this will get out of hand with some of the other counter-producing cards we're using, like Mazirek, Kraul Death Priest.

How to Succeed in Business Without Really Trying

Once we have our commander and some tokens on the field, we'll want sacrifice outlets to turn them into cards and counters on Korvold. While we aren't using the most efficient effects, we gain additional utility by going outside the box.

We can deal with problem lands with Army Ants, while Quagmire Druid and Stronghold Assassin deal with enchantments and nonblack creatures, respectively. If we can get a large enough creature, Bloodshot Cyclops can chuck it to damage any target. Ghoulcaller Gisa lets us go wide by cashing in one big creature for a ton of Zombies. We're running five Clerics, so if we happen to have one of them on stage, Relic Vial can draw us extra cards and will drain the table each time a creature dies.

Speaking of A Little Priest, Priest of Yawgmoth and Soldevi Adnate can refund the mana we spent on certain permanents. Our favorite creatures can even reprise their roles with the help of Hell's Caretaker and Whisper, Blood Liturgist. Trading Post is everything we want from a supporting actor, providing token production, sacrifice, and a means to discard reanimation targets until they're ready for the plot twist in Act II.

To close the curtain on the game, we have a number of big finishers that are sure to knock 'em dead. Mazirek, Kraul Death Priest and End-Raze Forerunners can turn the creature tokens we make into Trouble with a capital T. With so many creatures entering the scene, Warstorm Surge will do quite a number on our opponents. Cavalier of Flame, Marionette Master, and Juri, Master of the Revue can damage opponents directly. We can also lean on good old-fashioned combat with our commander, or heavy hitters like Triplicate Titan, Abhorrent Overlord, and Myr Battlesphere.

Korvold is a commander of many talents who often falls victim to being typecast as the villain, but instead of rehashing the same old plots, Korvold could lend his considerable star power to some more niche strategies. If you scroll to the bottom of the Themes Menu on Korvold's EDHREC page, you can see some other interesting ideas for the commander, like -1/-1 counters or Rat Colony.

If you're still with us, you must want an encore, so I also have a couple of decks to share from friends and all around excellent community members. Drake Smith shows us the chemistry between Korvold and Obosh, the Preypiercer in Korbosh's Friendly Funhouse. Critics agree that having Obosh as a companion reins in Korvold's often excessive performances. Additionally, while Sek'Kuar Deathkeeper takes the lead role in Matthew Hopkins' cult hit Echo Tribal, fans have long speculated a potential revival starring our Fae-Cursed King.

Well, the final curtain is lowering, and it's time to take a bow. We hope you have enjoyed this somewhat experimental offering from Korvold. Be sure to leave a review in the comments, and join us for our next production of Power Sink!