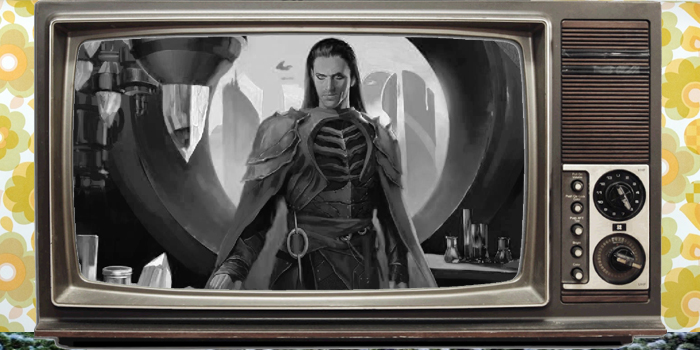 Don't touch that dial! It's time for Power Sink, the article series where we have a few laughs with those commanders where everybody knows their name, but aren't always glad they came.

While his son K'rrik, Son of Yawgmoth may be more popular with audiences, Yawgmoth enjoys a prominent reputation. He's ranked 86th overall on EDHREC, with 2,551 decks to his name, and is the fourth most popular mono-black commander. His ability to draw a card and place a -1/-1 counter on a creature at the cost of paying one life and sacrificing a creature is very strong. Normally this sort of ability is limited by available mana or needing to tap, but Yawgmoth can keep going until you run out of life or creatures. He also lets you discard a card to Proliferate, which, in concert with his first ability, makes it tough for your opponents to keep any creatures around.

Yawgmoth is a combo-enabler waiting to strike, and in black, he has the tools to find the exact cards he needs, along with some other cards that care very much about the things he brings to the table. We're starting to get the picture, but I think we got some more 'splainin to do with Yawgmoth, so let's look at his average deck.

With cards like Zulaport Cutthroat, Bastion of Remembrance, and Blood Artist, Yawgmoth's average deck looks like a typical aristocrats build. While this isn't all that far from the truth, these cards also offset the life loss from Yawgmoth's sacrifice ability and are part of his many lethal combos. Creatures with Undying, like Butcher Ghoul and Geralf's Messenger, are essential in these combos, since the -1/-1 counters from Yawgmoth will cancel out the +1/+1 counter. If you have two Undying creatures, or a way to create tokens when a creatures dies, such as Pawn of Ulamog or Sifter of Skulls, you have yourself an infinite supply of targets.

Nest of Scarabs is "Dy-No-Mite" with Yawgmoth. Not only does it fit into the combos mentioned earlier, but Yawgmoth can use it to continually put -1/-1 counters on creatures, drawing cards the whole time. While the average deck doesn't do much to synergize with his Proliferate ability, Ichor Rats is here to take out opponents with Infect. Of course, if these combos don't get you there, there's always the old mono-black standby of making a ton of mana with Cabal Coffers and Urborg, Tomb of Yawgmoth and using it to cast Exsanguinate or Torment of Hailfire.

That's all for the average deck! Let's change the channel and take a look at what else we could do with this commander.

We're bringing back our favorites with a classic reanimator deck! Rather than focusing on combos and aristocrats to drain the table, we'll be cheating out heavy-hitting creatures. Both of Yawgmoth's abilities lend themselves to this strategy. With a readily available sacrifice outlet, we can sacrifice a creature to bring it back to get more out of any enters-the-battlefield effects, and Yawgmoth's discard outlet makes sure our high-cost creatures are always where they need to be for our reanimation spells to find them. Proliferate is also helpful with a few of our cards like Everflowing Chalice and Crowded Crypt!

Demons and other creatures that tend to be north of five mana are the stars of the show. While having a few big flying creatures will get you surprisingly far in Commander, a lot of the big creatures in black have powerful effects stapled to them that give this deck a bit more action than you might expect.

Mono-black decks tend to have high Devotion, so Abhorrent Overlord and Underworld Hermit will make a lot of tokens, which make for great attackers, blockers, or just fodder for our commander when we want to draw cards. If we need to keep creatures in check, Butcher of Malakir and Archfiend of Ifnir work with our commander's abilities. Avatar of Woe and Reaper from the Abyss are there for pinpoint removal, while Midnight Banshee and Archfiend of Sorrows can sweep the board.

If combat isn't working out, we can make use of all of those black pips and drain the table with Gray Merchant of Asphodel, or we can sacrifice one of our creatures to Xathrid Demon. Finally, since we're running quite a few Demons, we've got Liliana's Contract in the draw package so we can try for that alternate win condition!

We've also got some effects to capitalize on all of these high cost cards we're running. Soldevi Adnate and Ruthless Technomancer let us convert our creatures into mana. If it's cards we need, Hoarder's Greed and Morbid Curiosity leverage the high costs in different ways to get them for us. Keen Duelist will drop our opponents' life totals while we rip six- and seven-mana Demons off the top of our deck.

Like a Sweeps Week clip show, we've packed this deck full with a variety of reanimation effects so we can relive all our favorite moments with our creatures. We have the classics, like Animate Dead, Dread Return, and Exhume, as well as quite a few others that audiences may have forgotten. Incarnation Technique is a great way to find additional reanimation targets and even lets you get two creatures if you're willing to let an opponent bring in a guest star of their own.

For longer games, we have repeatable effects. Dawn of the Dead lets us reanimate a creature every upkeep and gives that creature haste. Notably, it exiles the creature at the end step, but Yawgmoth is there to make sure that doesn't happen! Strands of Night lets us sacrifice extra Swamps to bring creatures back, and Diabolic Servitude returns to our hand to be used again when the creature it brings back dies.

Demon of Dark Schemes is useful as a board wipe as well as a reanimation effect, and while we aren't using any other energy cards, this one is more than capable of providing enough to pay for its ability. Plus, energy is just one more type of counter we can Proliferate.

Finally, we have mass reanimation for when it's about time for things to end. Yawgmoth's talents lend themselves to making Living Death really work in our favor. Grimoire of the Dead serves as a budget Rise of the Dark Realms, which we can set off much quicker since Yawgmoth can Proliferate. Twilight's Call has the drawback of giving our opponents back their creatures, but this is offset by its ability to be cast as an instant, bypassing summoning sickness.

Oh, and Mogis's Marauder works great with our mass reanimation effects, granting haste and intimidate to almost the entire team whenever we bring them back!

This deck takes me back to my earliest days playing Magic, back when Lord of the Pit was a feared card. It's really a grown-up version of the kind of thing I'd be facing on the lunch tables at school. There are certainly plenty of other commanders that work well with a deck like this, but I think Yawgmoth is worth a try because of his ability to micromanage where your creatures are located, from hand to graveyard to battlefield.

It's about time for the credits to roll! Let me know in the comments what creatures you'd want to reanimate in a deck like this, bonus points if you played them unsleeved on concrete or picnic tables.