Ranking Every Equipment with EDHREC – Part 15: One Hundred Followed by a Million Zeros 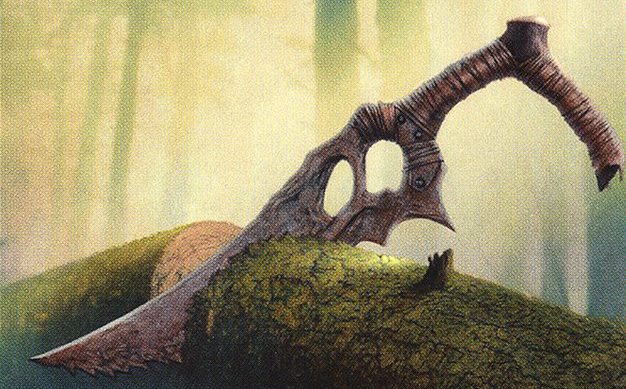 The Cream of the Crop

Welcome back to the silly series where we rank every single Equipment based on the number of decks they have on EDHREC! We've finally made it to the top 100! We made it through the definitely-not-playables, the questionably-playables, and the absolutely playable cards obscured by time, but now we reach the pinnacle of Equipment! Everything from here on in must be the cream of the crop. The best Equipment that money and mana can buy. Truly, I think we're ready for ten parts full of nothing but incredible Equipme -

I guess Cathar's Shield and Accorder's Shield are fine in Sram, Senior Edificer and Jhoira, Weatherlight Captain "Cheerios" decks. They're better than Kite Shield, which is.... neat. They can go and live with all the other zero-mana Equipment we've seen already.

Over, Under, or Just Right? Overplayed: How could this happen to me?

Now normally, a card like Scytheclaw would score very highly on my jeepers creepers scale, but I don't even know what's going on in this art. The perspective is super odd, and what the heck is that blue void it's floating in? I'm really just more confused than anything.

I'm also just kinda bemused by Scytheclaw as a whole because it's one of the rare cases of "reverse power creep," especially within Commander cards. Like, okay, you have Quietus Spike, which is a fine Equipment for some decks that care about the life loss, but it's not making a giant splash in Commander. So then they set out to make another Equipment like Quietus Spike, and you would expect them to make the card better, right? Make it more flashy so it makes more on an impact on the format.

They might have tried to do that with Scytheclaw by giving it Living Weapon, coming down with its own creature so it becomes a problem right away, but they also made it cost five mana. Five! And then also still cost three to Equip, so Quietus Spike is just clearly the better card. Not only that, they also removed deathtouch, which means any blocker just stops this card in its tracks. You obviously want to play Scytheclaw with ways to make the creature unblockable, but again, it costs five, so just run the Spike, which costs less.

This isn't even, like, a side grade. You know, like a Dualcaster Mage to a Reverberate that has specific applications where the other doesn't. Scytheclaw is basically just worse than Spike in every way. Is that a good thing? Like, I don't like when Wizards just invalidates an old card, but is this the way around that? The longer I stare at this, the more confused I am.

Over, Under, or Just Right? Just Right: I mean, for all that ink I just spilled, there are decks that want two copies of Quietus Spike, so it's got a home. I'm more just befuddled by the philosophy.

Okay, what is this? Wizards! Wizards, explain yourself! Why on earth is there this random Equipment that gives a creature +0/+6? "Oh, I can make all my creatures Fortress Crabs!" Like, you see why this is weird, right?

It wasn't even good when it came out! It's only afterwards that Doran and Arcades and Colfenor and Ikra and Phenax and freaking Mannichi, the Fevered Dream came out and retroactively gave this card a purpose. Heck, it's still not good now! It's synergistic, and it works well, but it's not because Slagwurm Armor itself has relevant text, it's because it has somehow warped reality around itself to the point where the text becomes good! What the heck?

Over, Under, or Just Right? Just Right: I could maybe argue it doesn't even belong in the 'toughness matters' decks, but I feel like the longer I stare at this, the more I'm likely to just have an actual fever dream.

So, if you're gonna play a Short Sword, you shouldn't. You should be playing Bonesplitter instead.

Okay, maybe that's a bit of hyperbole. Short Sword is fine, but Bonesplitter is about as close as you can get to a straight up replacement. The exchange of two power for two mana still isn't an amazing deal, but it is actually okay in a Voltron Equipment deck, like Wyleth, Soul of Steel. Bonesplitter is a workhorse and should be the card you're eventually replacing all those Short Swords with.

Over, Under, or Just Right? Underplayed: This and Civic Saber are the cream of the crop. Yeah, remember that card? That's also far too low.

Oh, no! How truly difficult the downside of O-Naginata is to overcome! Three power and trample for two mana is a good rate if you're trying to win with commander damage, but whatever shall we do to find a creature with a whole three power?!?! I mean really, how many creatures that meet that description could there possibly be? None that are popular, certainly, and Voltron decks never want to increase the power of their commander at all! The card's just far too hard to build around. What a shame!

Over, Under, or Just Right? Underplayed: Yeah, this card is an excellent inclusion for budget Voltron decks and should absolutely see more play. It's even from Saviors of Kamigawa! It's not often we get to be excited about Saviors of Kamigawa.

Similar to Leering Emblem, Runechanter's Pike exists in this very strange realm of Spellslinger decks that also want to attack with creatures, which is a weird niche. This card is absolutely strongest in decks like Adeliz, the Cinder Wind, that have good fodder for it, or Taigam, Ojutai Master, that already want to attack anyway. I've definitely seen this card win games in a spell-focused deck with a combat gameplan.

I'm less sold on it in all the hardline control decks. It's a little more playable than Leering Emblem in your average Niv-Mizzet, the Firemind deck as a type of "finisher," and I see a lot of hardline control commanders, like Baral, Chief of Compliance, on this page, but I don't think it's actually worth it. If you aren't particularly creature-dense, or don't play a lot of evasion, Pike gets a lot worse. You put it on your Melek, Izzet Paragon, and it makes him massive, but he's getting chump blocked forever. There are just a lot of places where Pike doesn't win the game, and in Spellslinger-style control decks, it's competing against cards like Mizzix's Mastery, Enter the Infinite, Mnemonic Deluge... you get the idea. Pike wants to go fast, but the nature of the strategy means we're going slower, and it's just not worth it.

Over, Under, or Just Right? Overplayed: Although I did see it one time in a Fblthp, the Lost deck where the only win condition was to win with Flbthp commander damage. That's not good, but I must respect it.

In this case, we have Shield of Kaldra, which, in addition to being part of the silliest mini-game ever, is also just a Darksteel Plate that cost one more to cast and two more to Equip. It even has indestructible itself, for that extra layer of delicious protection. Mmmmmmmm.

Shame that at the end of the day, you don't need a Darksteel Plate that's worse in basically every way. Technically, Darksteel Plate is slightly more expensive, but Shield is still $10, so you might as well just spend the little bit extra for the cheaper Equip cost. If you just want to protect your commander, there's no reason you'd run Shield over Plate. However, there are a lot of decks that need ways to protect their commander, so maybe there're decks that might want two Equipment that grant indestructible...

...In which case they can run Hammer of Nazahn and leave Shield of Kaldra for all the jank players! Good, I'm glad we figured that out.

I had to make sure we hadn't talked about Gorgon's Head yet. Nope! It's actually got a good lead over Flail here. I guess being $2 and one more mana to cast is just enough to leave this card far behind. Really, though, the two cards are basically identical. If you're into deathtouch so much you'll run an Equipment that does nothing else but grant it, you might as well run two.

And trust me, you'll know when you're that into deathtouch, because the decks running Gorgon Flail are running it for a very simple reason: commander pingers! AKA, commanders that deal damage to other creatures, à la Prodigal Sorcerer. There're a million different commanders that fit this category. You got the classic pinger commander in Jeska, Warrior Adept. You've got modern pingers with upside, like Kelsien, the Plague and Syr Carah, the Bold. You've got big pingers, like Kamahl, Pit Fighter and Latulla, Keldon Overseer, and weird pingers, like Arashi, the Sky Asunder. You've got terrible pingers, like Ben-Ben Akki Hermit and Tor Wauki. Pingers with upside, like Nin, the Pain Artist, pingers with infinite combos, like Niv-Mizzet, the Firemind. Aristocrat Pingers! Repeatable pingers! Whatever the heck Gnostro is supposed to be! Dogs and Minotaurs and Fire Girls and Kithkin and... and Spirit Things and.... Rocks... Dwarf Wizards, and... whoooooooooooooooooooof.....

*Huff huff huff* I think I overdid it... need to *cough cough* catch my breath... I don't remember what we were talking about, but I... I need to lie down.

Over, Under, or Just Right? Underplayed: Ooookay, where were we? Oh, right. Spooky snake thing. It's not only the pinger decks running this. There's some stuff like Alesha that mix the deathtouch with first strike, but it's all for the same purpose of threatening to kill creatures. You'll have a good idea when these cards are good.

Okay, at least, at least, Bone Saw has a little bit more I can talk about. Namely, that it's also doing a fairly solid Short Sword impression. It's not like that +1 toughness ever really mattered on Short Sword anyway, so you might as well save yourself a whole one extra mana on casting it. Oh joy!

Yeah, if my sarcasm isn't coming through clear enough, I'll say I'm still not super enthused about this. Is it bad to use Bone Saw as a cheap Equipment to trigger synergies like Sram, Senior Edificer and Jhoira, Weatherlight Captain? No. As a card generally though, is it better than Short Sword and its ilk? Probably, but you can do so much better. Run Sai of the Shinobi and get your Equipment synergies turned on for free, or run Leather Armor and save the Equip cost that you're gonna be paying more than the casting cost. Or you could even pay an extra mana - gasp, I know - and get a card with relevant text, like Bonesplitter or Civic Saber. Like, Bone Saw is fine, but it's just fine!

Over, Under, or Just Right? Overplayed: Although again, like, 70% of the play on this card is just because it costs zero mana, so my complaining doesn't even really matter. Also, BONE SAW IS READYYYYY!

And Another Thing That Does Not Matter...

Well, they weren't all winners, but there was some good stuff tucked away in the top 100, so let me know what you think of this batch so far! Do you have a pinger commander with Gorgon Flail? Do you have something cute with Slagwurm Armor? Let me know in the comments. Until next week!