Power Sink - The Gitrog Monster and the Land of Enchantment 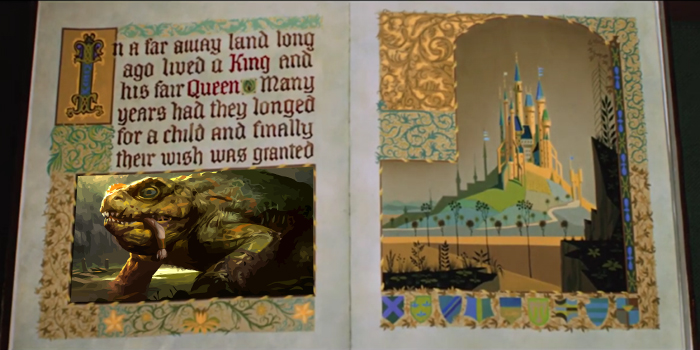 Once Upon a Time

In the far away land of Commander, in the village of EDHREC, there lived an article series named Power Sink. Sometimes, folks in the land of Commander would get into trouble in the wrong places, causing chaos throughout the land. While many assumed they were untrustworthy, Power Sink knew they were just misunderstood and needed a little help finding a new way to express themselves. One day, Power Sink found The Gitrog Monster alone in a clearing.

Power Sink had seen Gitrog before when they placed 92nd overall in the EDHREC talent show, and 5th best in the Golgari category. The tricks it could do with lands drew crowds as well as cards, and being 6/6 with deathtouch, Gitrog always did well in the jousting competition. Golgari commanders usually look pretty gloomy despite having the best ramp, removal, and tutoring in the land, but today The Gitrog Monster was looking especially so. "Why so sad?" asked Power Sink. "It's a long story," said Gitrog.

"That is a long story," Power Sink agreed. "I still don't think I get it, but let me consult my magic mirror." After some time, Power Sink remarked, "I recall Rebell and The Spike Feeders discussing this in YouTube Square." After 9 minutes and 18 seconds, Power Sink understood. "That part about dredging your entire deck by discarding Dakmor Salvage to something like Oblivion Crown and using Kozilek, Butcher of Truth or Ulamog, the Infinite Gyre to shuffle your graveyard back into your deck over and over again seems like it would take a while, and people tend to dislike non-deterministic combos for just that reason. Aside from that, it seems like it would be difficult to overcome the card advantage you can leverage with Squandered Resources and Rain of Filth."

"Exactly," The Gitrog Monster agreed. "And if people don't like that, what else can I do? Seems like the folks who want a lands deck prefer Lord Windgrace or Korvold, Fae-Cursed King." Power Sink was moved by the Frog's plight, but thought better of giving it a sympathetic pat after seeing the human arm dangling out of its mouth. "I'm sorry; it seems like folks aren't enchanted with you anymore. However, I taught Korvold how to tap dance, and I know I can help you too. If we want to make you more enchanting, why not see if an enchantress can help?"

The Enchanted Forest (and/or Swamp)

Enchantress decks are known for using cards like Verduran Enchantress, Enchantress's Presence, and Setessan Champion to draw cards whenever an enchantment is cast, or in some cases, enters the battlefield. This creates a powerful draw engine, especially combined with land-enchanting Auras that add mana, such as Wild Growth, Fertile Ground, and Overgrowth. While The Gitrog Monster seems like it would work at cross purposes to a deck that wants to enchant its lands, we should be able to draw enough cards to stay ahead of our commander's sacrifice requirement. We'll be using several land Auras to ramp and most of the available enchantress cards. Argothian Enchantress is a bit expensive and I didn't exactly marry a prince, so we're leaving it out.

Along with the standard enchantress draw package, we're running a few other cards that synergize with the card type. Doomwake Giant and Blightcaster will let us pick off smaller creatures as we cast our enchantments. Combat damage is our primary method of winning, so we have Generous Visitor and Oath of the Ancient Wood to power up our creatures along with Nylea's Colossus and Ancestral Mask, which are likely to give us lethal damage on an opponent.

We're also using a few Auras to power up creatures, including and especially our commander. Being a 6/6 with deathtouch, Gitrog is more than happy to get Auras that provide trample, like Rancor and Talons of Wildwood. Demonic Embrace is uniquely useful in this deck. Not only granting flying and a boost to power, but it can be cast from the graveyard, triggering our enchantress effects and possibly the draw from our commander if we discard a land to play it from the 'yard. While Tempting Licid doesn't do much with our enchantment synergies since it starts as a creature, it's a great way to get evasion for a larger creature or to throw on our deathtouch commander, and it gets serious style points.

The Fairest in All the Land

Even though we're powering down the deck, we don't want to ignore the Landfall synergies available to us with our commander. As it turns out, quite a few cards we would want to use in a Landfall strategy happen to be enchantments. Dryad of the Ilysian Grove and Druid Class are enchantments that provide additional land drops alongside Azusa, Lost but Seeking to make sure we have lands to feed our commander. Ramunap Excavator and World Shaper let us get lands out of our graveyard alongside The Mending of Dominaria.

Even our win conditions can be supplemented with enchantments! Rampaging Baloths is a classic way to make tokens in a Landfall strategy, but we can also add power to the board with Retreat to Kazandu and Roaring Earth. Strands of Night is a reanimation spell I would have expected to see in more than 105 Gitrog decks; repeatable reanimation is great, and our commander draws a card whenever we pay the cost for Strands.

We've also worked in a bit of a subtheme of using Auras to enchant lands to make them creatures. Usually these cards don't see much play, but our commander will draw us a new card if they meet removal. Genju of the Fens and Genju of the Cedars are interesting here as we get those enchantments back in hand, ready to be reused for our enchantment synergies, if the enchanted lands go to the graveyard. Rune of Might and Rune of Mortality can be placed safely on our lands until we are ready to make them creatures, and if you're still concerned about losing an animated land, Hateful Eidolon will pay us back for the Auras we lost.

With all the Auras and +1 counters in this deck, it makes sense to utilize the modified mechanic from Kamigawa: Neon Dynasty. While there aren't too many cards available to make use of this, Kodama of the West Tree is a slam dunk. Providing trample is always a welcome sight, nd getting lands when our creatures connect means we're going to have mana for our spells and lands to feed our Frog. Finally of note is Unforgiving One, which I think deserves to see a bit more play than the 720 decks it's currently in, especially in decks that use counters that might want to recur a creature.

And They All Lived Happily Ever After

"So you see, the answer was inside of you the whole time, and the real synergies were the friends you made along the way," explained the Fairy Godmother as The Gitrog Monster was bathed in a soft golden light. The townsfolk cheered and said nice things in the comments while Power Sink took its leave and set off to find other commanders to help.