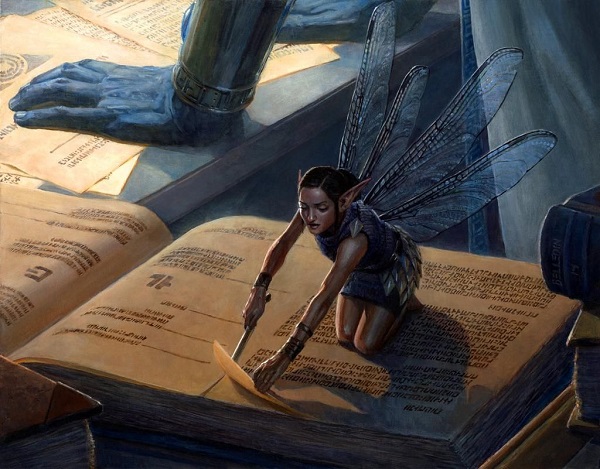 Welcome to Too-Specific Top 10, where if there isn’t a category to rank our pet card at the top of, we’ll just make one up! (Did you know that Pestilence is the only non-Tim card from Alpha with an activated ability that deals damage?)

Now, some of you may think that I just got a pun in my head and decided to run with it.

You're right. Let's do this.

While I wouldn't go so far as to say that commons aren't played in Commander, I don't think it's much of a stretch to say that the format isn't exactly defined by them, either. Of the top 100 cards per EDHREC, 36 have ever been printed at common. While a third is respectable, it's also kind of a misnomer. Eleven of those 36 are the Signets, which have only ever been printed at uncommon in booster packs, and one of which is a "common" that has ranged in price from an initial printing at $35 down to a steady $6 for the last six months.

Combine that with old commons that may never again be reprinted in a set that sees Standard, like Brainstorm, Ponder, and Preordain (seeing a pattern here?), and you begin to see how all commons may not exactly be common. Then, finally, there're the cards that used to be acceptable in their color combination, but are no longer in today's version of the color pie. Some of these are more extreme, like Misguided Rage's ability to be a black card that is actually red, but even that wouldn't work, because neither color is allowed to destroy enchantments. Others are just a bit outdated and may someday return when the pendulum swings back, like Disenchant.

In general, however, if you're looking for commons to fall in line and be a bit boring, Core Sets are probably the place to look. While there are certainly some shining stars that fit all of the above descriptions that have come out of Core Sets, there has also been a long line of boring vanilla 2/2s and sorcery-speed "strictly worse" draw spells designed to balance Limited environments while still introducing options into Standard that may not be as spicy as the Ashnod's Altars of the world (yes, that was common), but provide a similar effect to the format.

With that in mind, then, what are the most-included commons that ever came out of a Core Set?

Except, once again, that question isn't actually that interesting. With all of the reprints that have come out of Core Sets over the years, the listing of the top commons from Core Sets reads almost like a list of the most popular commons, in general. So, once again, let's eliminate the reprints, and see what cards originally from Core Sets are the most popular in EDH right now. And one more thing... let's only list the ones that were originally printed at common, as well!

Criteria: Cards originally printed a) as commons b) in a Core Set. As is tradition, all results are ordered by EDHREC score.

Straight to Alpha and yet another appearance on Too-Specific Top 10, it's Red Elemental Blast! REB has only been growing in popularity as EDH becomes more popular and becomes a faster format, and that's no surprise. After all, a one-mana counterspell with modal options? Who wouldn't love that?

And the Alpha streak continues with another one-mana spell, this one a difficult-to-remove Aura that gets you a turn ahead. Wild Growth can definitely backfire if someone is packing some land removal, and while there will certainly be some people with Strip Mines out there ignoring Maze of Iths to do just that, overall it's a relatively low-risk way to ramp. Add to that the synergy with Enchantress strategies, and it's actually hard to see how this hasn't become more popular than the constantly removed mana dorks of the world...

While it's not quite winning the Sign in Blood versus Phyrexian Arena (38865 inclusions) argument yet, Sign in Blood is nonetheless a super efficient draw spell that is unquestionably the correct answer at higher levels of play. The fact that it can also kill opponents who might have gotten a bit greedy with their life total (or library) in addition to just drawing you two cards for two mana under more normal circumstances is just gravy.

If you ever wondered if Spellslinging strategies were popular in a wide array of metas, look no further than Archaeomancer. In almost a full ten percent of decks that can play it, this wizard's enter-the-battlefield spell recursion is a powerhouse in strategies from Storm to Blink. Even outside those normal avenues, however, it's not hard to find a reason to include a creature that can get your best spell back to use again in a pinch, nor is there a lack of other decks looking to abuse enter-the-battlefield abilities in a world of Yarok, the Desecrated and Panharmonicon. Which reminds me... play more Torpor Orb, people! It's not Stax, it's defense!

No matter how you swing the math, three mana for one mana is a good deal. With that said, Dark Ritual is a bit too fast for many EDH tables. While it may have been good fun to Ritual straight into a turn-one Phyrexian Negator or Hypnotic Specter back in the day, in Commander that particular play will probably just make you into a target at most tables while still remaining behind the player who pulled a turn-one Sol Ring.

Luckily, there are a lot of decks that care a lot about casting multiple spells, whether they state it directly on the card like K'rrik, Son of Yawgmoth, or it's just good for the general strategy as it is in Kess, Dissident Mage. Just to prove that I have no idea what I'm talking about as far as turn-one Dark Rituals, however, have you ever seen a turn one Maralen of the Mornsong hit the field?

In our number five slot, we have what is widely regarded to be the best sacrifice outlet ever printed in the game of Magic, Viscera Seer. If you've ever put together any deck that cared about your graveyard at all and included the color black, you've probably had to strain for reasons not to include this one-mana Vampire Wizard, or just immediately given in and sleeved him and his weird hair up.

Some of you may be expecting the might that is Brainstorm to be coming immediately in the wake of this sorcery-speed cantrip, but, believe it or not, Brainstorm's entry into Magic was actually Ice Age, and as such is not actually in the running. With that said, Preordain has more than proven to be a satisfactory backup to the original over the years, and is even superior for many decks that don't have a way to clear the top of their library. Brainstorm-locking yourself may be funny for your opponents, but it's hardly a laughing matter when you have to struggle through two straight twenty-minute rounds of the table knowing you're not going to draw any answers whatsoever.

Elvish Mystic is the quintessential mana dork, unless...

You want the original. Llanowar Elves has been the one-mana go-to for green decks and folks on a budget since the very beginning of Magic's history, and that continues today even in the slower environment of Commander. While many swear off mana dorks as fragile ramp, they're also fast and can swing in a pinch, not to mention this particular pink-haired gentleman being the first inclusion in the decks of one of the most popular tribes out there.

Commander has always been a format with a love for ramp. As much as competitive formats may like to ridicule us as Timmies and Tammies who don't do anything until turn five, we've always been trying to speed things up at least a little bit, and Cultivate is usually the first go-to for exactly that. Being able to put a land directly into play and another into your hand just can't be beaten. Except for the strictly better version of Kodama's Reach, of course. Or the instant Harrow that can put two lands onto the battlefield immediately, untapped.

But yeah, I guess Cultivate isn't a bad third option, for being everyone's first option...

Speaking of cards that are probably better than Cultivate, those of us that are playing one- and two-color decks may want to consider slotting in Nissa's Pilgrimage. It's still a budget card at under 50 cents, and can get most decks three cards instead of two in the mid- or late-game, at the same rate. It currently comes in at number fifteen on this list, and honestly that's too low.

Murder, on the other hand, comes in at number twelve, and shouldn't be anywhere near the top 50. Since I'm a list guy, here's a quick list of all of the versions of this card that are probably worth considering over it, for just about any deck:

Are they strictly better? No. Are they generally cheaper, more powerful, or more flexible? Absolutely, and most are still on a budget, as well...

Speaking of removal spells that should probably see more play, is it finally Lightning Bolt's time to break into this top ten instead of sitting at number thirteen? The format is getting faster and faster every day, and 84 of the 202 commanders created in the last two years have three or less toughness. Given that Lightning Bolt is an instant that only costs one mana and can target anything, however, you may find that it's a bit more lethal than you might have thought...

Over the series, there have been some questions about how I reach the data to make these lists. With that in mind, I'm going to be trying to implement this section at the end of each of my articles to link the Scryfall search that I used to come up with the contained list. If you have any questions on the commands or shorthand I've used to come up with the list included, or have an improved method I could have used to save some work, we would love to hear about it.

It's easy to put on the rose-colored Sunglasses of Urza, but there are definitely many who feel that commons have lost much of their power over the years, going from playable staples of formats the world over to chaff that is completely unplayable outside of Limited. Obviously, however, there are a few places you can land in between those two feelings.

And finally, what are your favorite commons out of a Core Set? Can you just not get enough of Generator Servant, or is Unsummon still putting in real work for you?

Let us know in the comments, and we'll see you at the regular-old, super-common white folding table you see at every gaming store and convention venue everywhere.